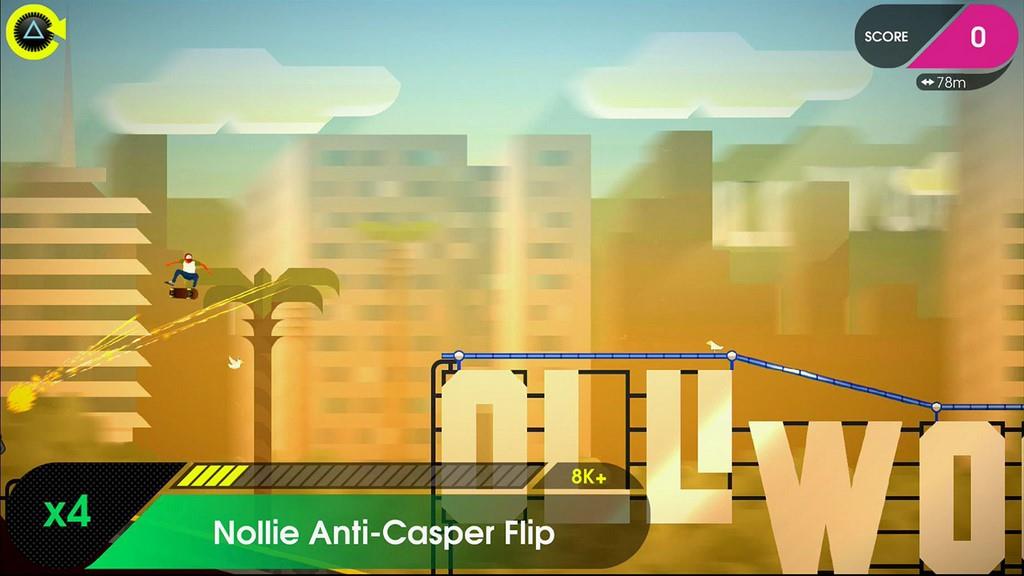 OlliOlli2 is the skateboarding equivalent of Hotline Miami. That is to say, if you enjoy games that place a strong emphasis on skill, timing and above all trial and error, you’re going to love OlliOlli2. If you loved Hotline Miami, this game will be right up your alley. However if you’re like me and trial and error grates on your nerves and makes you impatient, you will have a hard time enjoying OlliOlli2, but you’ll almost certainly be able to appreciate the stellar craftsmanship and style that went into this game. Allow me to explain.

I missed OlliOlli2 and its predecessor when they came out on PS4 and Vita, and now the game has arrived on Steam. That said I played developer Roll7’s action platformer Not a Hero and really got into it, and I can see similarities between the gameplay philosophy in that game and OlliOlli2. Not a Hero does involve a degree of trial and error, but the focus is on skill and creative use of cover. OlliOlli2 is all about twitch timing and expert, instinctual control; in many ways it’s like an old-school fighting game, another genre I have a deep appreciation for but not the patience to become truly skilled at. 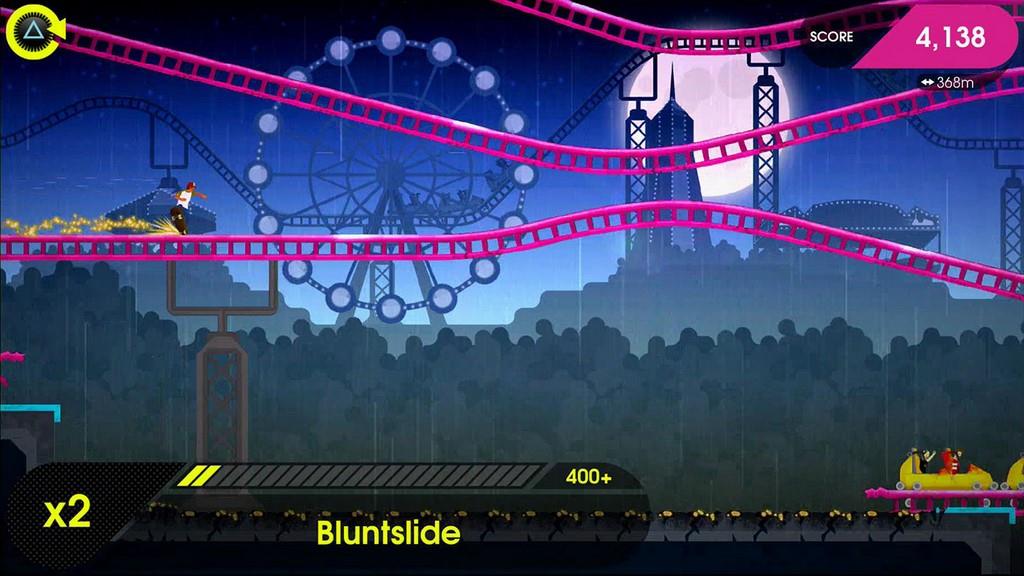 Like the first OlliOlli, the sequel—Welcome to Olliwood—is a side-scrolling skateboard game. The game recommends that you use a gamepad instead of a keyboard, and I’ll echo this recommendation; I’m not sure how I would pull off the precise timing with WASD in this game. Your goal is to traverse an obstacle course while performing as many tricks as possible and maintaining a high combo to multiply your score. These tricks include many stunts—kickflips, grinds, aerials and most importantly, manuals. To launch off and perform a trick you hold down the left analog stick and then mix a number of stick rotations and button presses to do the trick in midair. This constant downward motion on the left stick had my thumb cramping up after only a few levels.

Simply performing a trick is only half the execution though, as you must press the A button right before you hit the ground to stick the landing, or you’ll ruin your momentum and kill your combo. As you can imagine, maintaining this intricate rhythm of launch-trick-land throughout a level takes a lot of concentration. Simply getting through the tutorials—something I usually breeze through in most games—took me a solid few minutes as I adapted to the game’s pace and controls. Learning the basics isn’t nearly enough to get you through the game, however, and it won’t even begin to net you a high score or help you achieve the crazy challenges in each level. 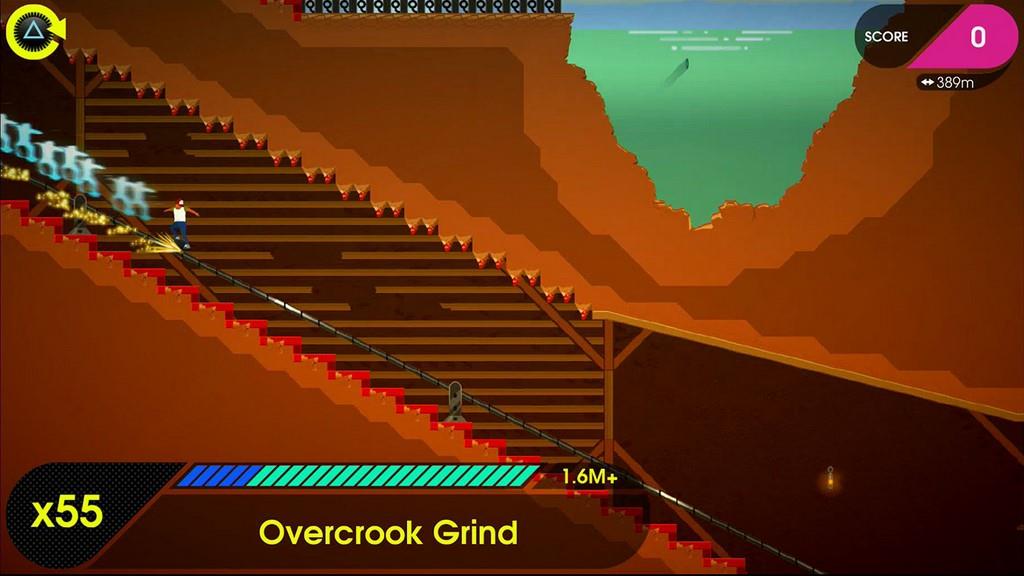 Simply put, OlliOlli2 is a freakin’ hard game. Just surviving any of the levels past the “amateur” tier is an accomplishment, and almost requires that you maintain a steady combo. Unless you keep pace and jump and grind off every surface that comes your way you’ll quickly wipe out on steep falls, traffic cones, dumpsters and the skater’s mortal enemy, stairs. This is achieved by mastering the manual, one of the basic tricks you learn early on. Essentially, when you aren’t grinding a rail you can still hold your combo by “manualing,” which is sort of like popping a wheelie on your skateboard. By tipping forward or back on two wheels you keep the combo going, but this is harder to maintain than simple forward motion and it’s especially hard to keep going when you’re hopping on and off grind rails like a madman.

After the 10th level or so I realized that OlliOlli2 felt remarkably like the infamous minecart levels from the Donkey Kong Country series. Those levels were examples of the pinnacle in 2D platformer design; the graceful timing and rhythm they required were nothing short of devious and pulling them off perfectly was the hardcore gaming equivalent of watching a master poet or cellist. Those levels also made a mere mortal like myself nearly chew my SNES controller in half, and unfortunately OlliOlli2 elicits similar frustration. Screwing up and wiping out—our falling into lakes, deadly spikes or bottomless pits in later levels—forces you to retry from the beginning. As in Donkey Kong before, dying right before the end of a particularly sadistic level is an exercise in Sisyphean anguish I wouldn’t wish on my worst enemy. Well, maybe I would. 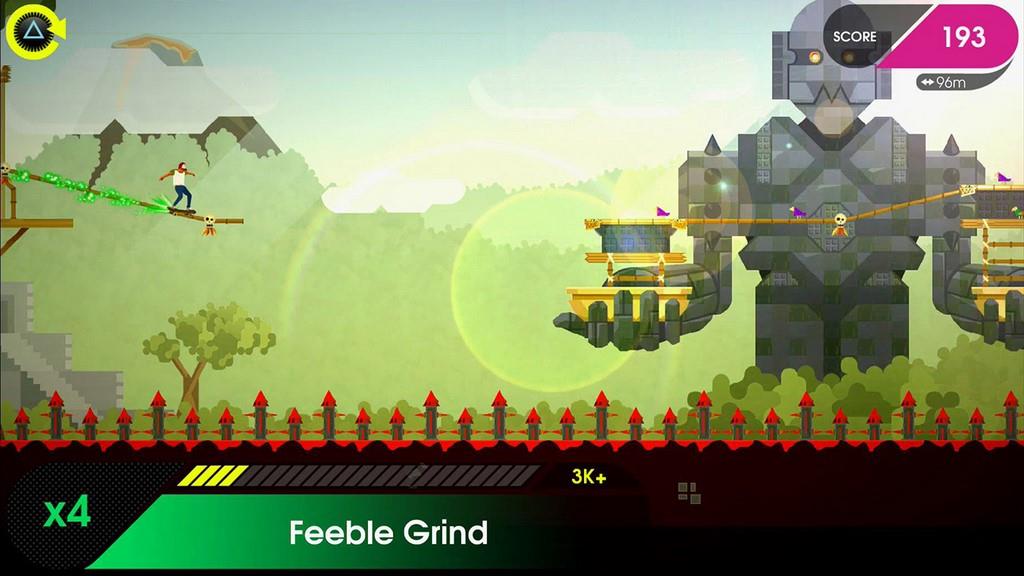 OlliOlli2’s gameplay might not be my exact cup of tea but I can definitely appreciate the artistry that went into it. As in Not a Hero Roll7’s designers are in fine form, creating another fresh, clean art style. This time it leans a little heavier on the Commodore 64 style visuals than the more pixelated appearance of Not a Hero, but the smooth animation and breakneck speed combine to make a game that feels like browsing an Andy Warhol gallery at Mach 2. The soundtrack is equally evocative and includes instrumental techno pieces from several talented artists, including Lone, Ital Tek, Submerse and Cid Rim.

So basically, that’s what it comes down to. OlliOlli2 is a fine successor to the original, a skateboarding game that fuses the twitch reflexes of a racer with the combos and control mastery of a fighting game, all while channeling the classically hardcore platforming of the SNES Donkey Kong series. Half of it has ties to what I love, while the other half is derived from genres that just aren’t to my liking. That said, I can’t deny that it’s a masterful and clever fusion of ideas that just works in its own right. If you’re a fan of any kind of retro, arcade gaming, odds are you’ll enjoy the distilled fusion of those classic ideas in OlliOlli2.

OlliOlli2 isn’t exactly easy for me to love but it’s a damn fine game in its own right. It nails the classic skating action of the old Tony Hawk games while mixing in fighting game combos and Donkey Kong style platforming. If you missed it on PSN it’s definitely worth a look on Steam.