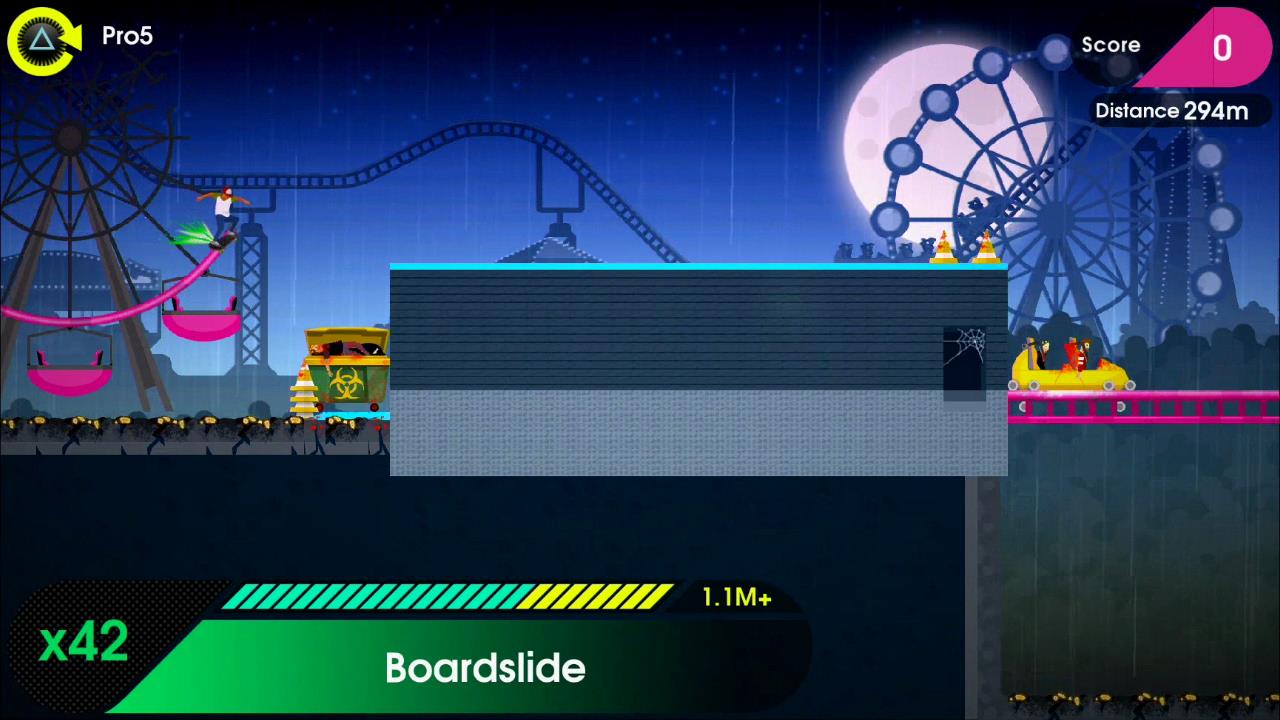 The first OlliOlli game for me was just what the Doctor ordered. The extreme skateboarding genre was pretty much dead in the water since the Tony Hawk and Skate franchises have pretty much been dead for years but OlliOlli was exactly what I was looking for. It's OlliOlli 2 takes an already great game and makes it a better. It's an incredibly fun and addictive game that improves upon everything the original had to offer and while it suffers from a difficulty spike problems it doesn't take away from the game itself.

If you played the first OlliOlli then you know what you will be getting with OlliOlli 2. You still skate on a 2D plane with tons of opportunities to grab huge air, grind off of rails and platforms, pull off huge tricks, and of course, try to avoid all of the obstacles in your way. Each level has a set of objectives which need to be completed in order to achieve a more starts which let you advance to later stages. Just like the first game the objectives range from getting a high score, grinding or tricking off certain terrain, collecting completing the level without any sloppy ratings or completing a level with all perfect endings. Completing tricks is easy as well. You hold down on a thumbstick and flick it in different directions for different tricks. If you are feeling risky, you can hold the trigger buttons down to spin in the air. This gives you a big point bonus but it also means that you are risking crashing and crash you will, a lot. You only get one chance to complete each level, crash and you lose all your point and have to start at the beginning again. 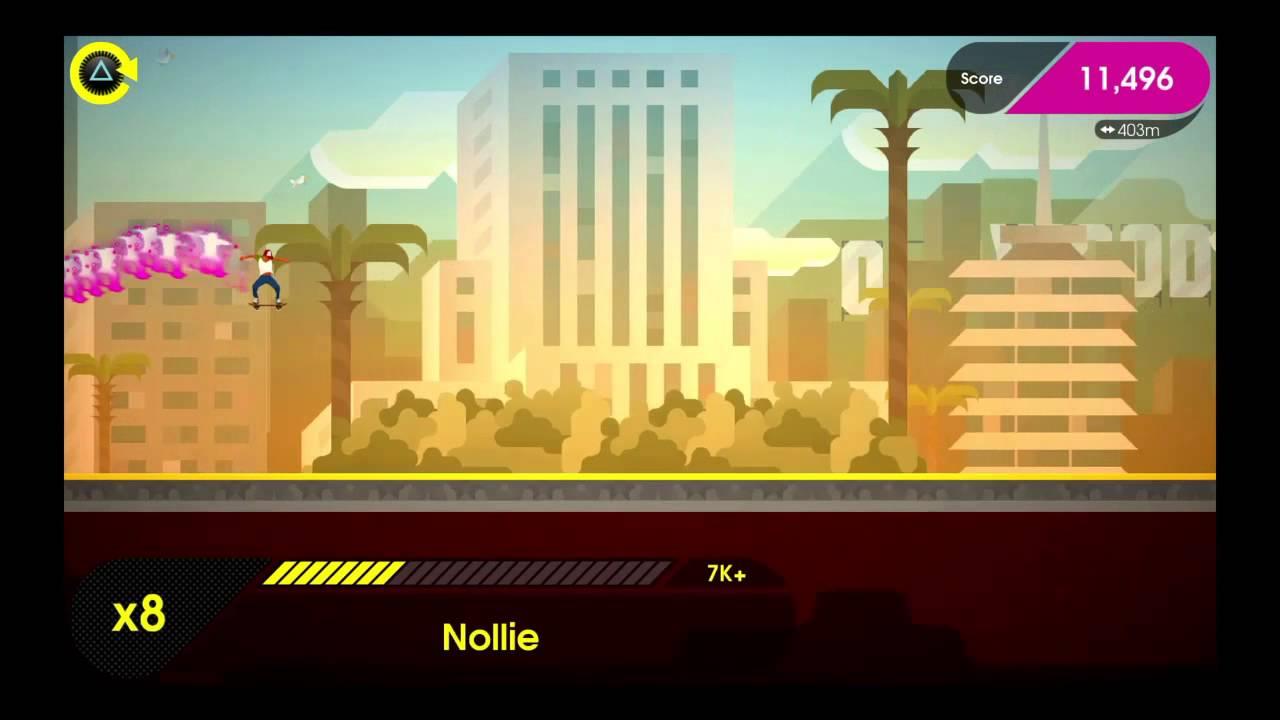 Thankfully, OlliOlli 2 is incredibly fun and the levels are short enough that even though you crash often, you won't feel frustrated having to start over again. You will however have to learn each levels layout if you want to get some big points. You may fly over a gap and then realize that you over shot it when it is way too late. Or you may be flying over a gap performing tricks and the ground comes up fast causing you to wipe out. The good thing though is that you don't have to complete all of the track objectives in a single go. The one thing I like to do is focus on one single objective at a time and when I only have to focus on a single task, I feel it's easier to accomplish them.

The one thing that was difficult about the first game was that unless there was some kind of rails or terrain to grind on, you would lose your combo. OlliOlli 2 however has brought in the almighty manual so you can land on the ground and continue your combo before launching in the air again or grinding on some rails. Manuals are easily performed by pressing the left thumbstick and X before you hit the ground. Of course this means that you do lose some momentum so the manual needs to be used at certain spots or you will slow down and crash. It really comes in handy when you are going for big points although when going for objectives such as "collect all the manual markets" it can get kind of confusing. Most of the manual markets are on the ground and this is fine, but some of them are on platforms in the air and some of these platforms are hard to tell if they are flat surfaces you are supposed to manual on, or if they are objects you can grind on.

Now the frustrating part. OlliOlli 2 does have tutorial levels which teach you as you go about all the mechanics in the game, this is fine, but soon enough, you will discover that the game will be throwing everything at you but the kitchen sink. I'm talking levels with tons of death traps, obstacles and other pits that there is no way you can avoid on your first ride through each level. Trial and error is required for these games but now we are getting into course memorization territory. Of course when making a sequel to a game like this, you want the game to be more challenging, which it is, but the problem is that the challenge comes out of nowhere instead of easing you into it. I was going from getting four and five stars per level rather quickly, to only getting one, that was of course when I finally completed the level. Thankfully the game is fun, so while the challenge hits you like a truck, it isn't the kind of challenge that makes you say "I never want to play this again". 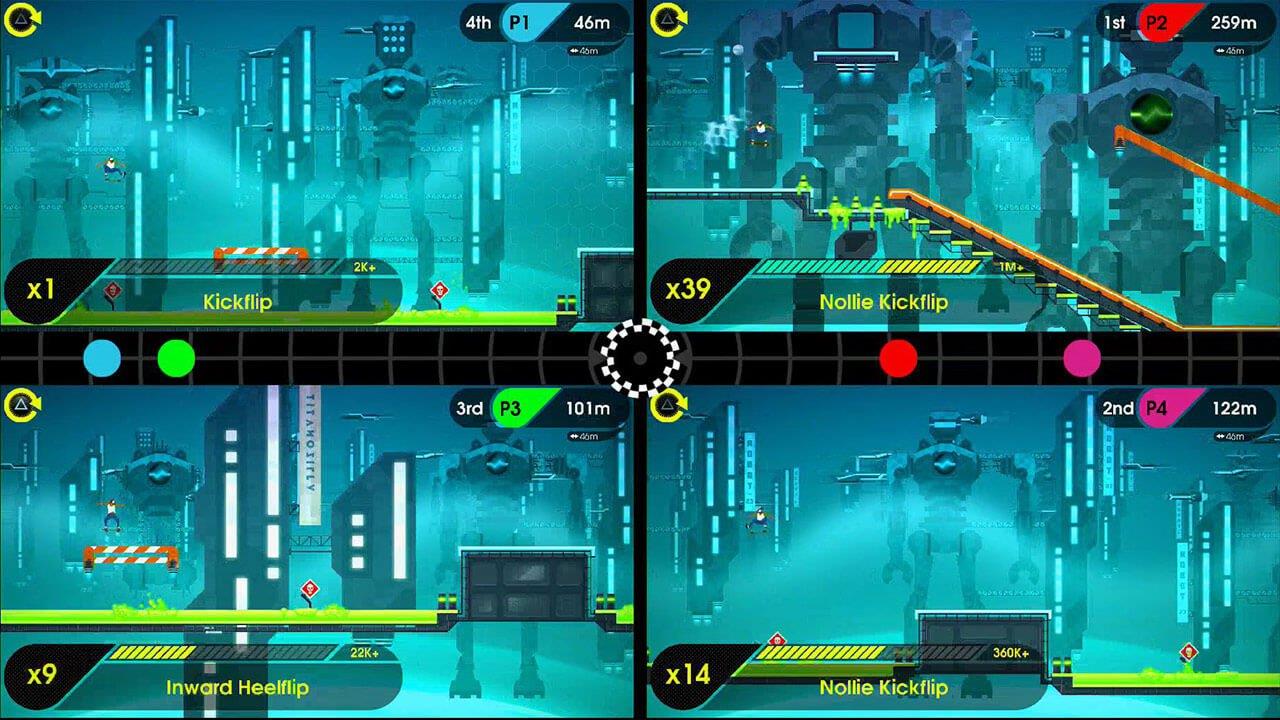 Of course there is tons to do in the game as well. Aside from the career mode, you can also play each level to see how high of a score you can get and you can also try to climb those leaderboards. It's funny how I think I do really well and get a score of 1,000,000 or so and then look at the highest rankings on the leaderboards and see that there are people with ridiculous scores that I could never even dream of getting. The daily grind also returns along with a hard mode, as if the game wasn't hard enough. You can also play OlliOlli 2 on the go as the game supports cross buy and cross save between the PS4 and Vita. This is another one of those games that is just perfect for the Vita and I love how it has becomes almost the indie handheld.

I also couldn't get through this review without mentioning the absolutely amazing soundtrack. OlliOlli had an incredible soundtrack and OlliOlli 2 has an even better one with perfect music that totally fits the atmosphere of the game. If I knew how to rap, I would probably start busting out some freestyles while playing. The game also features more polished graphics this time around instead of the pixel art of the first game but it keeps all of it's charm. The game is stunning to look at and is exploding with beautiful backdrops and color everywhere.

All in all, OlliOlli 2 takes the first game and makes it much better. The added manual is such a welcome inclusion and you will find yourself busting out huge scores much easier than before. The gameplay is still as fun as it ever was and there is plenty of reason to keep coming back. Whether you want to complete all of the objectives, compete for high scores, or most importantly, just because you want to play a fun, extreme skateboarding game, there is plenty of reason to play OlliOlli 2 over and over again. Yes the difficulty spike is a problem, but thankfully the positives of the game outweigh the few negatives.

Olli Olli 2 may be incredibly difficult at times but it is also non stop fun. It takes everything that made the first game great and made it even better. If you missed out on the first game, you really can't go wrong with this one. This is a game that I feel that anyone can enjoy and especially those who need an extreme skateboarding fix since Tony Hawk and Skate are now dead. If there is an Olli Olli 3, I anxiously await to see how they are going to top this one.