Most people are honest (at least, I like to maintain this viewpoint), so I get the appeal of social deduction games.

We get to experiment with socially acceptable lying.

One such outlet for outright deceit is Eville, which has officially commenced its open beta today. Public access will run through January 23, with the anticipated launch via Steam Early Access scheduled for an undisclosed time this year. While it's easy to label any social deduction title as an Among Us copycat, I think it's fair to say Eville can stand on its own as a graphical upgrade relative to the most popular game of this genre. Check out the announcement trailer below:

Hot Wheels Unleashed announces its next season of F.U.N.

Hot Wheels Unleased now has a Bikini Bottom flair with the commencement of the SpongeBob Racing Season. Players can access free and premium digital items, which are unlocked via this season's new challenges.

According to the press release, the SpongeBob Racing Season includes six themed vehicles based on SpongeBob SquarePants, Sandy Cheeks, Squidward, Plankton, Mr. Krabs, and, of course, Patrick. The season will include themed customization items for the Basement and the Player Profile as well as plenty of gears and coins for everyone. The Season began yesterday and will conclude on March 29.

My Friend Peppa Pig launches today on next generation consoles: PlayStation 5 and Xbox Series S|X as a free upgrade for existing owners on the PlayStation 4 and Xbox One. This upgrade features faster loading times, higher resolutions and framerates.

Developer Outright Games additionally announced that they are planning on releasing a DLC for the game in March 2022 and more information will be shared soon.

In My Friend Peppa Pig, you get to play as your own customizable character alongside Peppa Pig herself. Join in on multiple fun-filled activities, creating your own one of a kind story exploring Peppa's world.

My Friend Peppa Pig is available now on Playstation 4, PlayStation 5, Xbox One, Xbox Series S|X, Nintendo Switch, Stadia and PC. You can watch the official gameplay trailer below:

Vagante is tough, folks. There is no downplaying the fact that this is a game that will literally kill a player less than a second after loading into a level, if said player is not careful. In fact, this happens several times in the below video, and you can hear the screams of horror every time it does. There are falling rocks, wicked spikes, fall damage, places to drown, and plenty of monsters to eat your face if the environment doesn't get you first.

Vagante is one of those games that players need to commit to, throwing themselves at it over and over again while they learn the rope and slowly figure out how to survive. The closest analogy I can come up with is Spelunky, but Vagante feels even more difficult than that classic. However, gamers seem to love it - Vagante has a Very Positive rating on Steam, so there is definitely an audience out there for this sort of game. Take a look at how we manage our first few hours of playtime, and let us know if you give the game a shot and do better:

Vagante is available now on Steam, and releases on PlayStation, Xbox, and Nintendo Switch on January 27.

I’m unsure how much real world parallel I can draw from RPGolf Legends and the actual game of golf, but if it can knock a few points off my handicap I’m all for giving it a shot. “An evil force has sealed all the golf holes in the world! Join forces with the spirit of a golf club and embark on a fantastic action-golfing adventure to save golf in the world!” The game is open-world where you fight monsters and golf all at the same time. But there is more than just your short game to work on. A class system, fishing, and crafting are just a few examples of things to do while exploring the six unique environments.

You can tee up RPGolf Legends on Xbox Series X|S, Xbox One, PC, PlayStation 5, PlayStation 4, and the Nintendo Switch. The game is currently 20% to celebrate the launch.

WWE 2K22 has finally gotten a release date and it's very soon. WWE 2K22 will launch on March 11th 2022 and will feature Rey Mysterio as this year's cover star and the star of 2K Showcase.

Pre-orders for the game are available now across all platforms.

Here is what comes in each edition..

The digital deluxe edition will include the following

The hype is real: LEGO Star Wars: The Skywalker Saga arrives on April 5

After a long development cycle, rife with delays and extended periods of silence, TT Games today announced that LEGO Star Wars: The Skywalker Saga will be released on April 5, 2022. I mean, they could have waited another month and grabbed that May 4th date, but really, do we want to wait another month just so the game can be released on the most glorious of geek holidays? No, we do not. The hype is real, judging by Twitter's response today, and it seems that gamers across the board can't wait to get this game into their robotic hands.

To celebrate the upcoming release, TT Games, Warner Bros. Games, and Lucasfilm Games released an extended game overview trailer, which gives a great look at how huge, awesome, and fun LEGO Star Wars: The Skywalker Saga will likely be. Prospective players get a great look at the new combat mechanics, the many settings, and the sheer freedom that this game looks to offer. Check it out:

One of the coolest things to be revealed in the trailer is the concept of "character classes", which can be upgraded across the board with found Kyber Bricks. The classes include Jedi, Hero, Dark Side, Villain, Scavenger (Jawas?), Scoundrel (Han and Lando), Bounty Hunter, and a couple of different droid types.

I stand by LEGO Star Wars: The Force Awakens as one of the best Star Wars games ever made (and probably the best LEGO game to date). If you need something to play while you wait for this epic to arrive, I highly recommend checking that one out.

Keep an eye on Gaming Nexus for more news on LEGO Star Wars as we get closer to April 5th.

Anyone that has taken a look at Netflix' hit series Sex Education knows how funny and charming actor Ncuti Gatwa can be. So its fun that GRID Legends, the latest installment of Codemasters' racing franchise, features Gatwa in its live action career storyline.

In a new video published today, Gatwa (starring as Voltz Racing's head driver Valentin Manzi) ponders the connection between man and machine, bringing all of the good humor to the role that viewers might expect. This trailer gives players a good idea about what the story will look like when the game releases on February 25, with a full, live-action career story. Players will get to know their teammates and opposition in the video portions of the game, and then race alongside them in GRID's well-loved arcade racing. The live-action segments were filmed using tech similar to that used in The Mandalorian, with actors performing against a computer-generated backdrop, resulting in stunningly realistic settings.

“It was a pleasure to work with Ncuti. His portrayal of Valentin Manzi has taken our story mode, Driven to Glory, to another level, and we know his followers will enjoy racing alongside him,” said John Merchant, Brand Director at Codemasters in a provided statement. “Players will now understand what’s needed to compete in the GRID World Series and it will take more than focus and a few good moves to win.” 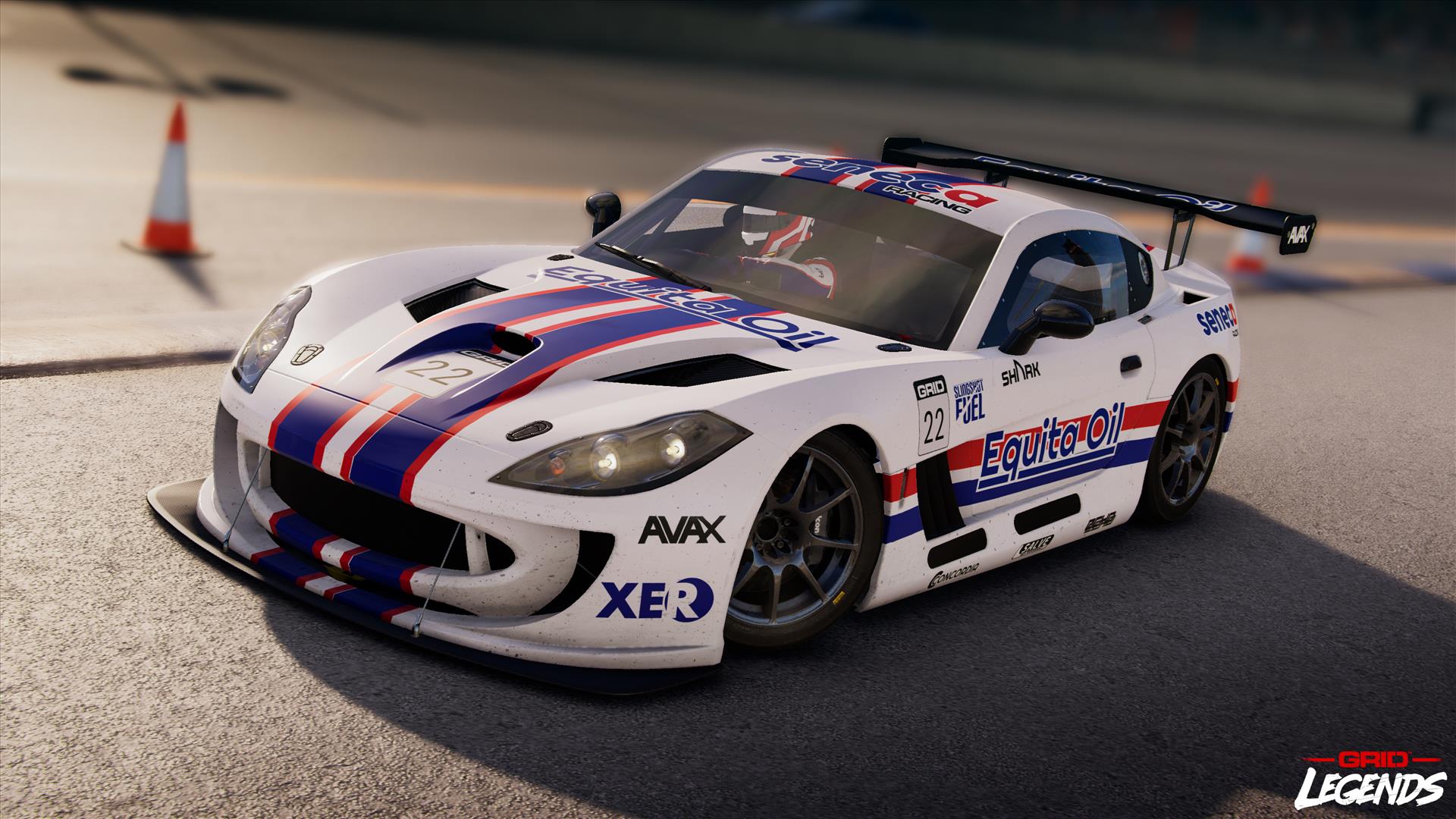 This week’s topic for The Gaming Nexus Show was "difficulty". Our presentation today comes in three acts. In Act One, Eric talks about how hard it is to be good at video games, and about how even though he reviews games he’s not necessarily good at them. In Act Two, Joe and Eric chat about the glory days of the original PlayStation era, back when games only had one difficulty. They break down their top five games from that system, with a bevy of honorable mentions (be sure to listen for Elliot’s top five at the top of the show). We round out the episode talking about the biggest gaming news of 2022 so far, Microsoft buying Activision Blizzard. How difficult will it be for Sony now that Microsoft owns an ever growing library of games?

If you want to skip around (that’s totally fine with us) here are the jumping on points for this week’s segments:

Enjoy listening to us weekly? Help us out and tell someone about The Gaming Nexus Show. We also have other projects you can get into as well! Like catching Joe’s Twitch, look for Max’s game, go to Eric’s YouTube channel, and listen to Elliot’s other podcast. All the ways to enjoy all the other stuff we make can be found in one handy link.

River City Girls, a spinoff of the River City Ransom, series was an awesome beat em up released a few years ago. River City Girls 2 is in development right now but we won't have to wait much longer for another game in the series. Well if you haven't played it already that is.

River City Girls Zero will be releasing soon and is an updated port of an SNES game that was only released in Japan in 1994 called Shin Nekketsu Koha: Kunio-tachi no Banka. This new localization will retain the original 16 bit gameplay but will include new updates such as a brand new animated opening and manga style cutscenes. This game will now serve as an official prequel to the first River City Girls game.

Limited Run Games is also releasing limited physical editions of the game along with collectors editions. The pre-orders for these editions will start on January 28th.

The Limited Classic Edition will retail for $64.99 and will include the following

The Limited Ultimate Edition will retail for $149.99 and will include everything included in the Classic Edition along with the following

A new trailer for the game was also released courtesy of Destructoid. Check that out below. No official release date for the game just yet aside from "early 2022". 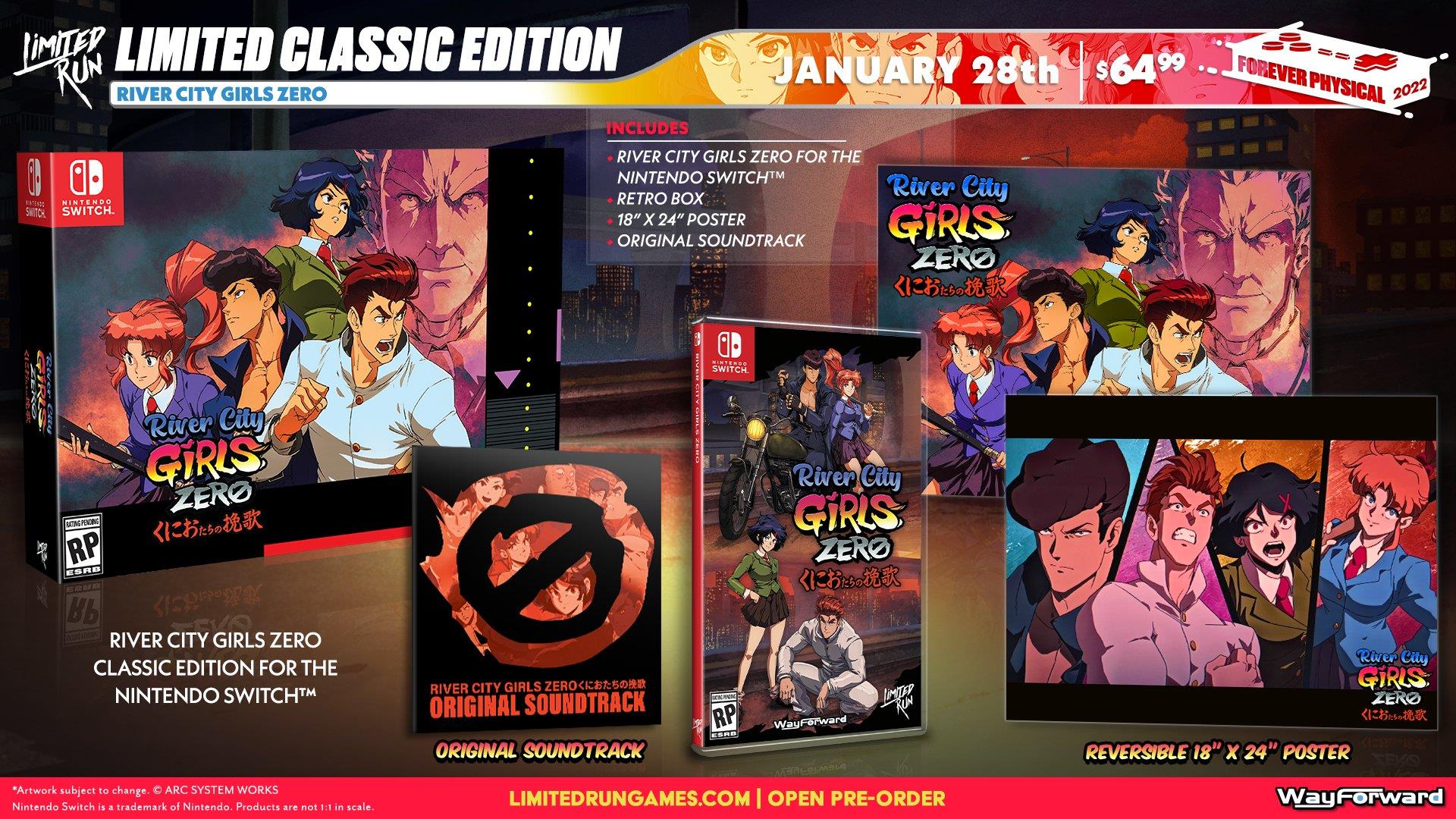