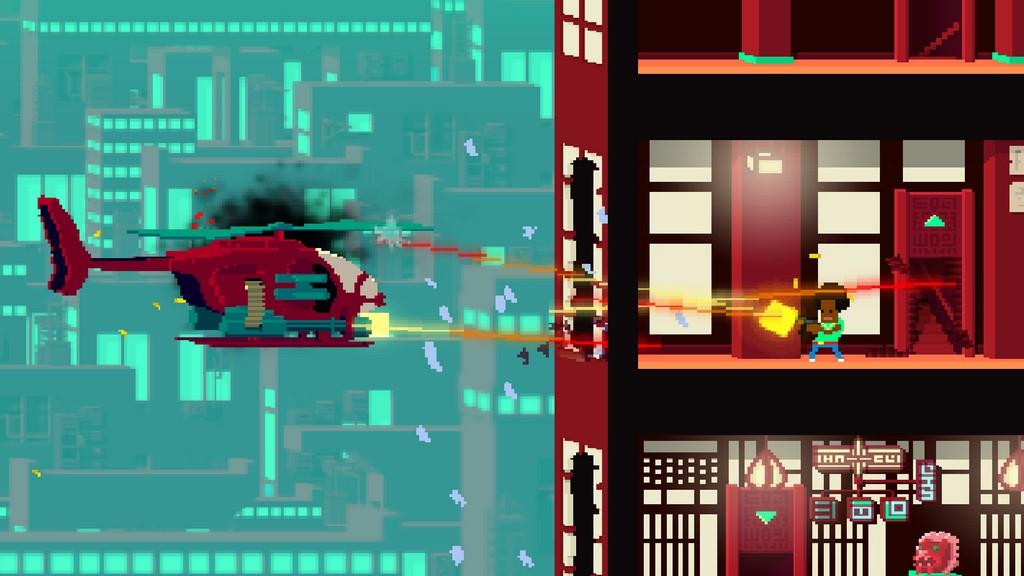 Last year I previewed Broforce, a lovingly nostalgic action game in the tradition of Contra and Metal Slug. Developed by Extra Lives Studios and published by Devolver Digital, the game takes the most humorous excesses from 80s and 90s action films and affectionately parodies them in a genuinely laugh-out-loud over the top style. Ironically Extra Lives is a South African studio, but the foreign perspective on American action cinema probably gives them a unique humor angle, similar to Rockstar’s Scottish take with GTA.

A year later and Broforce is still in early access—Extra Lives seems content to just keep adding free content and new characters. However, imagine if Broforce was developed by a UK-based studio, and all that that implies. That is exactly what you get with Roll7’s Not a Hero. The game’s title might make it sound like another faux-subversive, achingly pretentious indie game walking tour, but the actual game couldn’t be farther from the truth. Not a Hero is a distinctly British take on the 8-bit action that Extra Lives pioneered in Broforce. The result is a darkly comedic, skill-heavy action platformer that has its tongue planted firmly in its cheek.

Not a Hero is an apt title for the game. You play as one of several low-rent mercenaries hired by the megalomaniacal Bunnylord. This Bunnylord character is a man who supposedly comes from the future. He is dressed in a Batman-esque bunny mask, and is obsessed with being elected mayor of London. If he loses the election, he promises that the city will be destroyed in an atomic holocaust. Raising his approval rating and getting votes is of paramount importance, and the only way to do this is by ridding London of crime. Bunnylord sends his various minions on “campaign assignments,” which consists of invading a building and murdering the so-called criminals that reside within. Bunnylord’s targets are ostensibly organized crime lords and their henchmen, but you can never be quite sure.

As a character Bunnylord makes this game. Unlike the other characters that all speak English, he talks with a synthesized gibberish voice that sounds like someone rubbing a squeaky balloon against Styrofoam. Even better, Roll7 has programmed his dialogue so that most of it is created with a random word generator; nearly all of Bunnylord’s incidental nouns, adjectives and adverbs are selected randomly. This makes him sound utterly daft and quite insane, generating out-there terms like “superfluously cute death ray.” It definitely makes sure that you’ll never skip a cutscene. 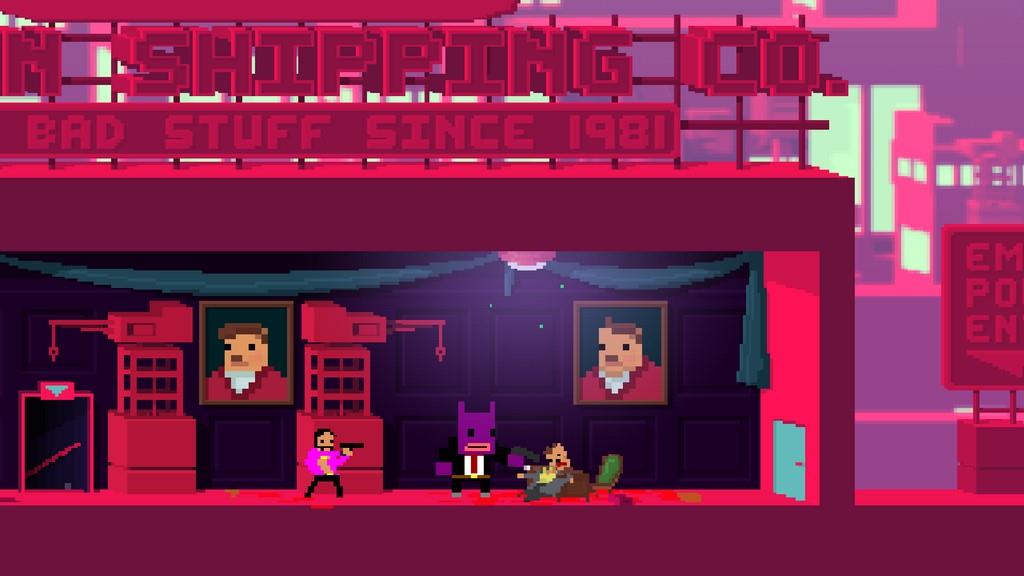 The gameplay itself shares many ideas with Broforce, but the movement is generally more vertical than horizontal. As one of the Bunnylord Fun ClubTM mercs you are dropped on the roof of a criminal stronghold and make your way down, murdering enemies in a messy fashion and achieving objectives as you go. As with Broforce there’s a cast of colorful characters, but unlike Broforce’s roster of action flick sendups, Not a Hero has characters couched in various personalities of the British Isles.

These characters make Not a Hero a game that I can say is legitimately hilarious but also well-balanced. Each player not only has their own distinct style and weapons but also personalities based on regional UK stereotypes. For example, Samantha (“I’m from Wales…yes it’s a real place!”) packs a rifle that does less damage per shot but she can reload while she runs. Conversely Cletus—“dresses like a hillbilly, actually from Scotland”—carries a shotgun that can blast down doors but takes forever to reload.

Steve is a more basic character with no strong pros or cons; as he puts it, “no frills, just death.” He’s good for “door to door canvasing and murdering,” so his dual SMGs have a good rate of fire but eat ammo quickly, and he gets knocked down by enemies rather easily. As Bunnylord’s approval rating goes up he can hire more mercs, including a low-rent James Bond named Clive, a delusional man in a superhero costume named Ronald Justice, a katana fanatic named Kimmy, and a man who may be the Lord Jesus Christ, but who is most likely just a sleazy lounge lizard who resembles the Biblical icon. 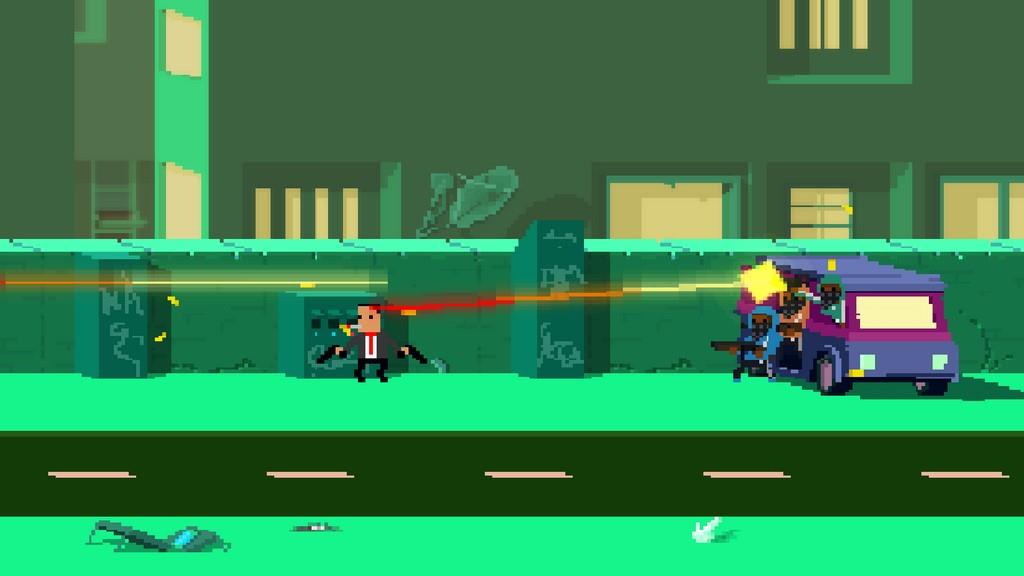 You’ll probably spend several minutes on the character select menu just listening to all the smarmy things the “campaigners” say, but once you dive into the game you’ll find a retro action title worth its salt. Every character can run-n-gun, but taking cover is equally as important. This is one of the few side-scrollers I’ve encountered that has a complex cover mechanic, allowing you to duck behind partitions, file cabinets and the like, but also roll into and out of cover. You can fire from cover although you will be less accurate, and enemies will get up close and personal to flush you out.

Of course, you can get in close too. This lets you knock down enemies and also perform some pretty messy executions, which are surprisingly graphic for what looks like a 16-bit game. It’s a little unsettling when the enemy thugs beg for mercy as you splatter their pixelated head across the corridor, but it’s all part of the game’s humor. Bunnylord is a psycho recruiting a private army, but after every “mission” you retire to Ruby’s Café for a well-deserved milkshake. The contrast made me chuckle.

Naturally missions get more complex as you progress, with objectives to liven up the rote murder. Stealing dogs (don’t ask), planting bombs, assassinating a PR guy, it’s all in a day’s work at the Bunnylord Fun ClubTM. Whereas Broforce’s variety comes from the increasing difficulty, colorful bosses and level variety, Not a Hero adds special extra objectives to each level. These can involve anything from performing a set number of melee executions, finishing an objective under a certain time, or completing the level without taking an allotted number of hits. 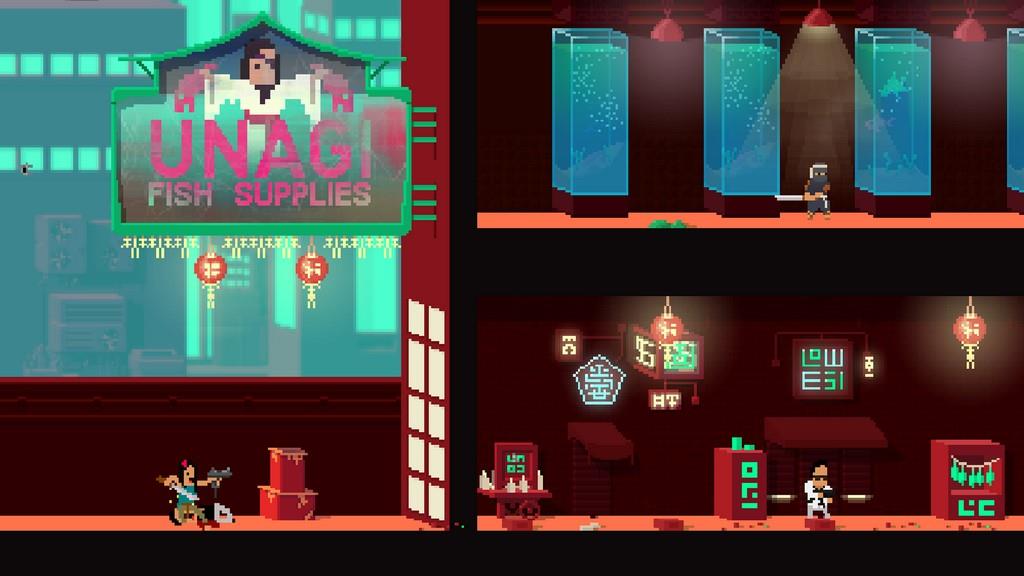 This also encourages you to play around with all the characters; a tank like Cletus might be good for special goals that require lots of murderin’, whereas a speedy character like Samantha or Steve would be better for a time limit goal. At the end of the day these extra objectives are tough but worth it, as they net you better medals on each level and thus grow your approval rating. This leads to new characters, and the cycle continues as in the best tradition of action platformers.

The art style of Not a Hero has less raw variety than Broforce but it still conveys the retro aesthetic well. There are a lot of little in-jokes on billboards and posters scattered throughout the levels that people living in the UK will probably get a kick out of. The sprite animations all impress, especially considering all of the characters are a mere handful of pixels tall. While the action is more evenly placed than the near-constant chaos of Broforce, Not a Hero still gets pretty crazy when the rhythm of killing hits that perfect stride. Speaking of rhythm, the music works wonderfully in this game. It’s no-frills club techno that is reminiscent of Hotline Miami’s soundtrack, but with less grit and more mirth.

It’s hard to review a game when there’s so much to like about it, because I’m tempted to ramble on for pages, filling my sentences with bizarre purple prose that would make Bunnylord proud. Suffice to say, you need to own this game. The Global Megalord Edition is $20 and includes the soundtrack, a digital artbook and other tchotchkes , but the base version is $13 and available on Steam, GoG and Humble. It’s weird to say, but I haven’t smiled, raged and ultimately laughed at a game this much since Broforce. Not a Hero is in good company.

I hate to describe Not a Hero as a smarmy British take on Broforce, but the similarities are undeniable. The quality is the same too. Relentless action, strong gameplay variety and a killer wit make Not a Hero one of the best indie games of 2015.