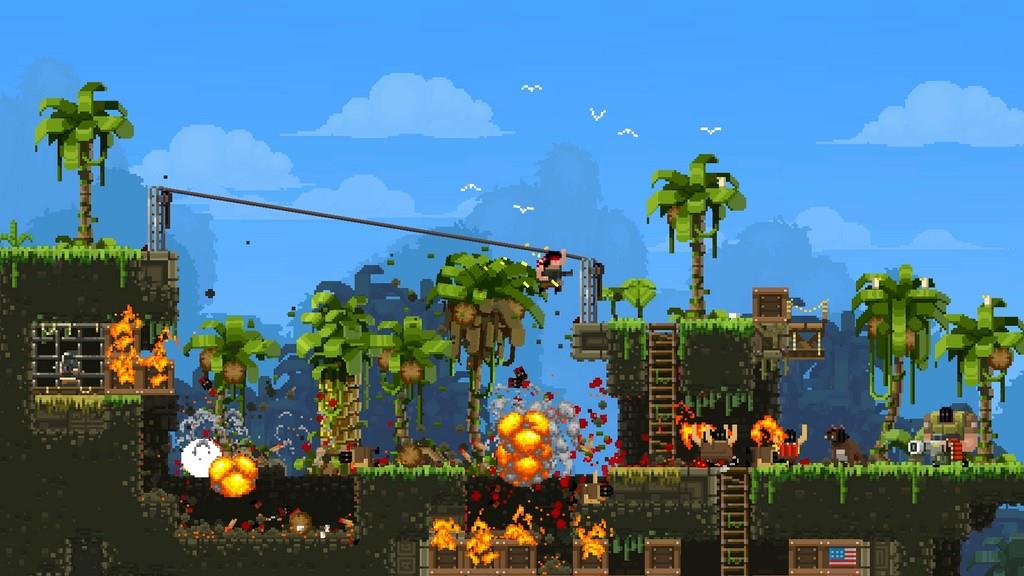 Broforce is the kind of game that makes me happy that the indie scene exists. This game probably couldn’t happen on a home console. To be honest, I’m kind of amazed it happened at all. The audacity of this product, not to mention its style, difficulty level, and the sheer potential for copyright issues make Broforce a risky prospect on any platform. But exist it does, and most defiantly and bombastically at that.

There’s only one succinct way I can describe Broforce: adorable carnage. The game has that charming, 16-bit affect where everything is pixelated, the characters are chunky, lo-res, chibi-fied sprites and the sound design is simple and straightforward. Broforce is also incredibly violent. In many ways it is very similar to the classic bunny vs. bunny stomping DOS game, Jump n’ Bump.

Broforce, however, is a lot more to the point with its violence. The morbid humor of Jump n’ Bump was that its sweet-toothed cuteness gave way to shock and surprise, when one fluffy bunny landed on another and smashed it into soppy chunks of meat. As the match progressed, the idyllic nature setting was painted in an increasingly thick coating of gore—the whole point of the game’s aesthetic was shocking contrast. Broforce has no such pretense. Its logo is a silver-plated bald eagle flexing its muscular arms, wearing a massive star on its chest. “Jingoistic” doesn’t really begin to cover it.

Broforce is an unapologetic but affectionate sendup of '80s Reagan patriotism and action movies in general. Its gameplay is also appropriately retro: the game is a 2D shooter/platformer in the vein of Contra and Metal Slug. You play as one of the eponymous bros in the Broforce, a super-patriotic mercenary team consisting of thinly veiled homages to famous action heroes of the '80s and '90s. Your mission: parachute into terrorist-controlled territory, destroy anyone and anything that gets in your way, make it to the end of the level and, I kid you not, kill the devil himself.

That’s literally how every level ends. You put a few slugs into Satan, hop onto the extended rope ladder of a waiting evac helicopter, and then fly away as the level explodes behind you and a killer guitar riff blares in the background. The game then messily tallies off every terrorist you wasted along the way, while the headline “AREA LIBERATED!” flashes above in bold, stars n’ stripes font.

Don’t mistake Broforce for a cathartic gun-porn romp, however—it’s a lot of fun, but also surprisingly challenging after the first few levels. Each bro is a humorously obvious parody of a famous action hero, and they all have different weapons and secondary attacks you must master to have any hope of defeating the terrorists, much less take on the game’s daunting bosses. In each level there are a number of bro POWs locked in cages; rescue them and you not only switch to a new bro, but also gain a life. Rescue enough bros and you unlock hidden characters, which is one of the main draws of the game. 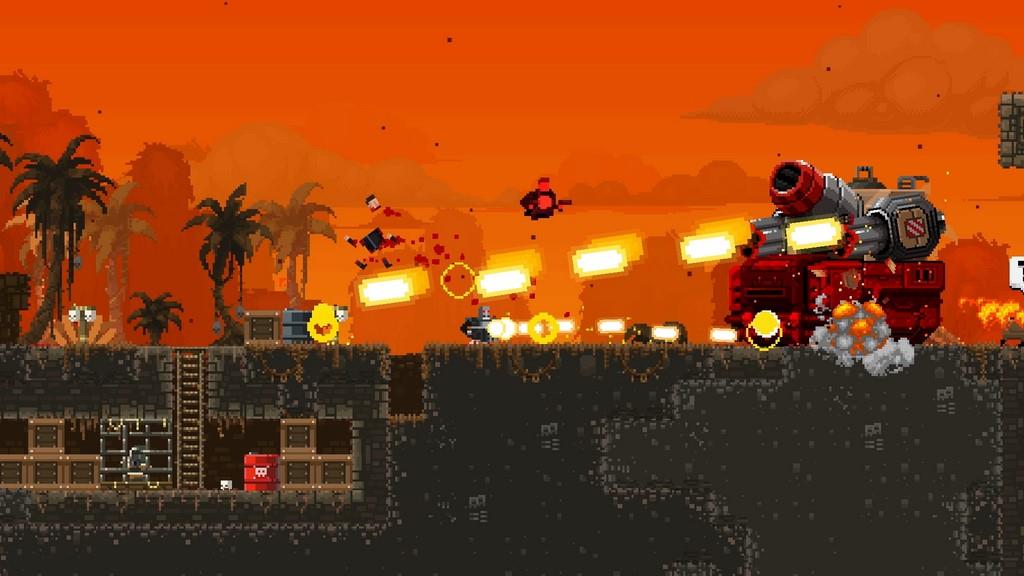 The roster in Broforce is one of the best pieces of fanservice I’ve seen in a long time. The game starts you off with a limited and fairly obvious set of characters. There’s Stallone (Rambro), John McClane (Bro Hard), Mr. T (B. A. Broracus), and Chuck Norris (Brodell Walker). As you progress, however, you’ll unlock bro-ified versions of Indiana Jones, Robocop, and MacGuyver, along with more recent action heroes such as Blade, Neo, Men in Black’s Agent J, Machete, the Boondock Saints and, saving the best for last, Alien’s Ellen Ripley. Appropriately, there are three versions of Arnie: Brommando, the Brominator, and Bronan the Barbarian.

The game’s portrayal of terrorists—as perceived by the stereotype of right-wing America—is equally on-the-nose. They’re all shady little dudes packing AKs and wearing black balaclavas. TNT-strapped suicide bombers scream and run at you, and lookouts even shout “durka durka!” when they see you, an obvious homage to the movie Team America: World Police. Broforce would admittedly be pretty offensive if it was straight-up stereotyping, instead of lampooning the stereotypes themselves.

The difficulty in Broforce spikes pretty early. The first few levels are gleeful, carnage-filled romps, but you’ll soon be scouring the levels for new lives and ammo packs for your special weapons. This game gets pretty damn hard in legitimate, straightforward difficulty, but just as often because of the game’s brilliant, but unbalanced, mechanics. 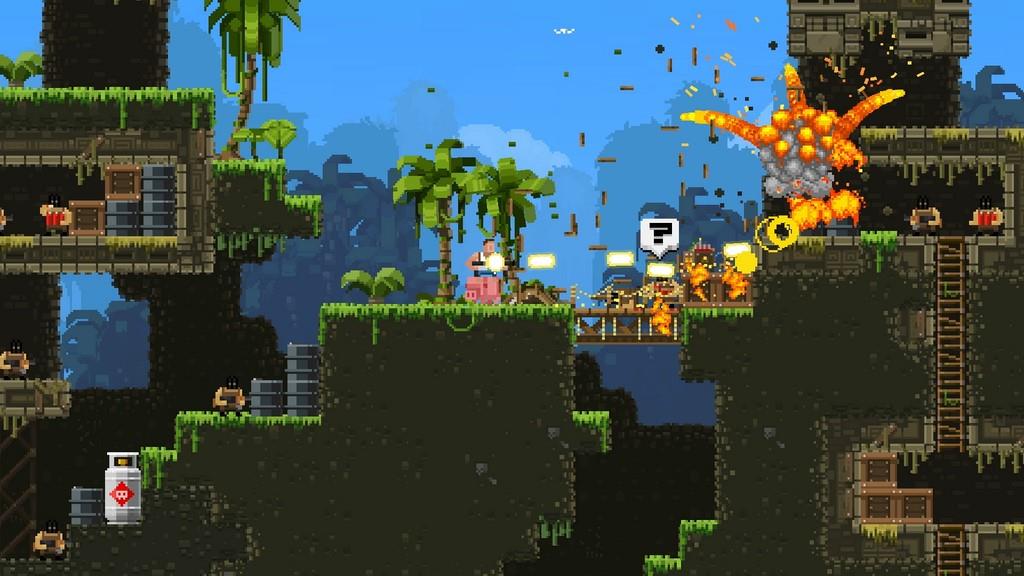 Like Terraria and a number of its imitators, every aspect of the environments in Broforce is destructible, and there’s plenty of wanton destruction to go around. This mechanic is pretty advantageous if you use it correctly. Blowing up bridges and ground can send half a dozen enemies (or one very big, difficult one) plummeting to their deaths. Blasting huge chunks out of the levels rarely impedes progress—every bro can scale 90-degree surfaces by digging their way up with a combat knife (and undoubtedly sheer force of will). That said, having so many fireworks, explosive barrels, and propane tanks around can be a double-edged sword. The amount of chain reaction chaos that can ensue from a single barrel explosion or hunk of falling debris makes Broforce pretty difficult to manage sometimes, leading to multiple accidental deaths.

This isn’t too bad in single player, but toss a few friends in for four-player co-op and you get the kind of extra-life-eating meatgrinder that leads to fights and headaches in the New Super Mario series. If you’re going to play co-op, I recommend you choose a close, understanding friend or significant other; someone you get along with very well and can work with. In any case, Broforce has a sometimes brutal pacing to its gameplay. Don’t expect to just hold the trigger down and win—like in Contra, every bro dies with a single hit. 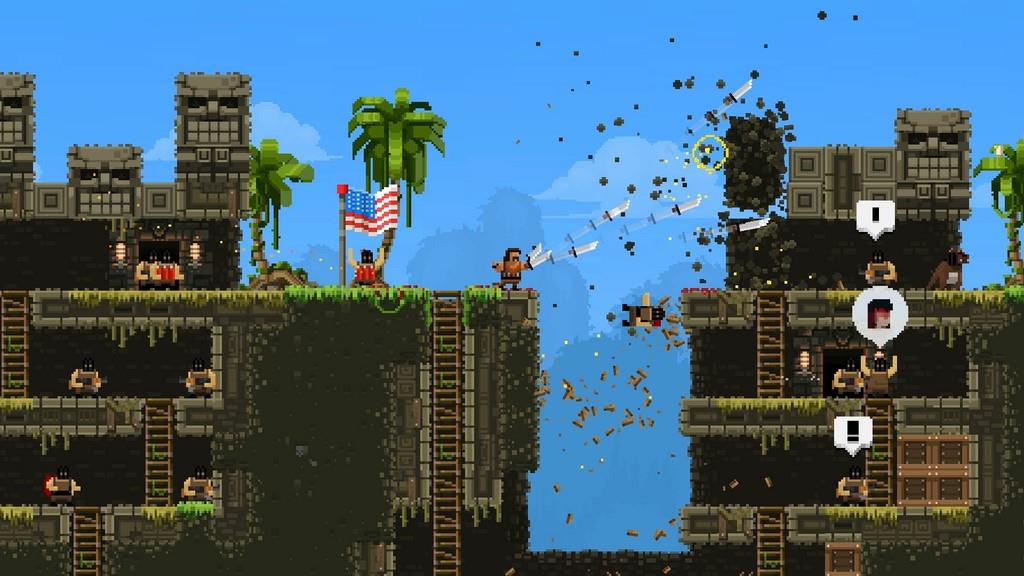 The only aspect that needs serious tweaking before the game’s release is the bosses. There are a number of memorable boss encounters at the end of each main chunk of gameplay, including a skyscraper-ascending escape from an attack helicopter that chews up the building as you frantically climb the floors. There just aren’t enough lives hanging around during these fights to make them feel balanced. The bosses pack serious firepower—miniguns, homing rockets, airstrikes—so running up against one of them causes serious whiplash. They also don’t have a visible health bar, so it’s hard to tell how well you’re doing or if the strategy you’re using even works.

I hammered on one boss with Arnold’s chaingun for what seemed like 10 minutes, only to die and have to start over. I felt like I killed at least three separate bosses through dumb luck rather than skill and tactics. I know this game is all about the retro shooters like Contra, but some elements of those old games died because they deserved to. Some old game mechanics are difficult because they’re frustrating and cheap, not because they’re good game design. For this reason, I ended up dreading the colorful boss encounters instead of enjoying them.

Boss fights aside, Broforce is one of the most promising indie titles on Steam right now. It’s still in beta, with a projected summer release, so for that reason I feel that its early access price of $14.99 is asking a bit much. I also managed to beat it in a single day, with the co-op and eventual community-made levels hopefully extending the game’s life. Broforce does include a level editor, so the amount of content is theoretically limitless.

Despite Broforce’s flaws, I had an absolute blast with it. Suffice to say, I haven’t laughed myself into a stomachache—or sworn as profusely—at a video game like Broforce in quite a while.