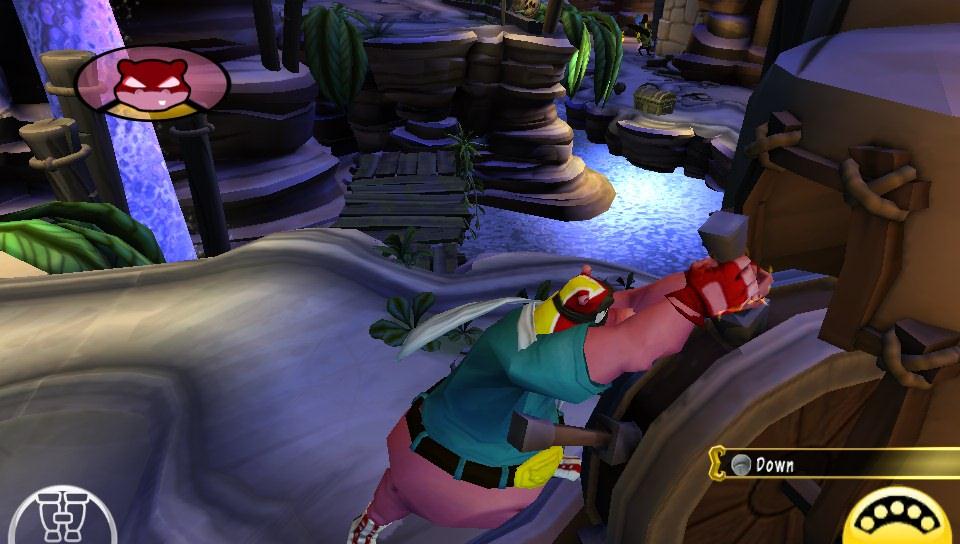 Written by Jeremy Duff on 2/5/2013 for PS3   Vita
More On: Sly Cooper: Thieves in Time
It is hard to believe that it has been more than a decade since Sly Cooper made his debut on the PlayStation 2. During that time, we have only seen three titles in the series and a compilation of those same games. Considering the success of the series, some might consider that a little surprising; most developers would take a series with this one’s popularity and milk it for everything that they could. Sucker Punch and Sony have been very selective in their use of the franchise.

Things have been ramping up over the past year to prepare for this historic anniversary. First there was the Sly Collection and then Sly made his return in PlayStation All-Stars. All of that was simply setting the stage for the Cooper Gang’s inevitable return in an all new adventure. That return is finally here as Sly Cooper: Thieves in Time is now available for both the PlayStation 3 and Vita.

You will find that the game, which was developed by Sanzaru Games rather than Sucker Punch, is the exactly the same regardless of your platform of choice. There are some slight graphical differences and some adjustments to the controls depending on the platform, but the overall experience is exactly the same. The two games even work in conjunction with one another thanks to the Cross Save feature which lets you transfer your progress between one game to the other. Plus, purchasing the PlayStation 3 version of the game, which only costs $39.99, will net you a digital copy of the Vita version at no additional charge. 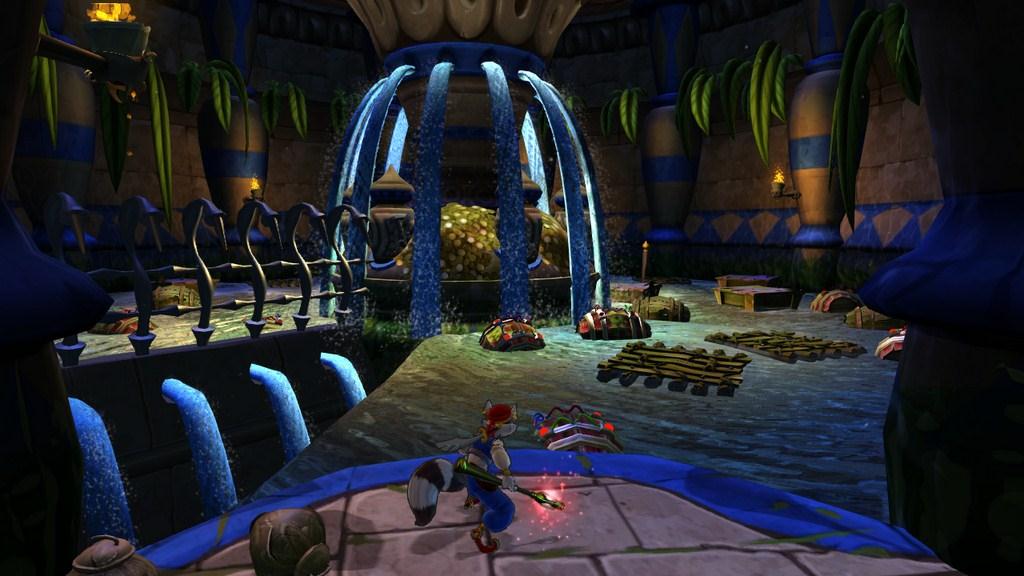 Enough about the the information you likely already know, let’s talk about the actual game! Thieves in Time is set immediately after the events of Sly 3. Bentley, Sly’s lifelong and trusted companion, notices something strange happening with the Thievius Raccoonus. The pages in the book begin disappearing, which can only mean one thing: someone is altering history. This news pulls Sly out of his pseudo-retirement and brings the Cooper Gang back together. Luckily, Bentley has already been working on a time machine during the gang’s downtime and is fully prepared to chase down whoever is behind this dastardly plot.

Since the entire gang is already well-versed in the stories that make up the Thievius Raccoonus, they know when and where they should begin looking. The gang sets out on an adventure through time to seek out the Cooper ancestors being effected by the events. I don’t want to give away too much of the story as part of the charm of the game is seeing the various time periods and ancestors; just know that you are going to meet a lot of Coopers from times like the Wild West, feudal Japan, and even medieval England.

Despite the new settings, the game itself is a classic Sly Cooper adventure through and through. The presentation still has that classic “film noir” style throughout the entire experience. The patented cell-shaded visuals are still here and look better than ever. The game looks absolutely phenomenal on the PS3, like a cartoon that has been brought to life. The Vita looks good as well but just not as polished as the console version. 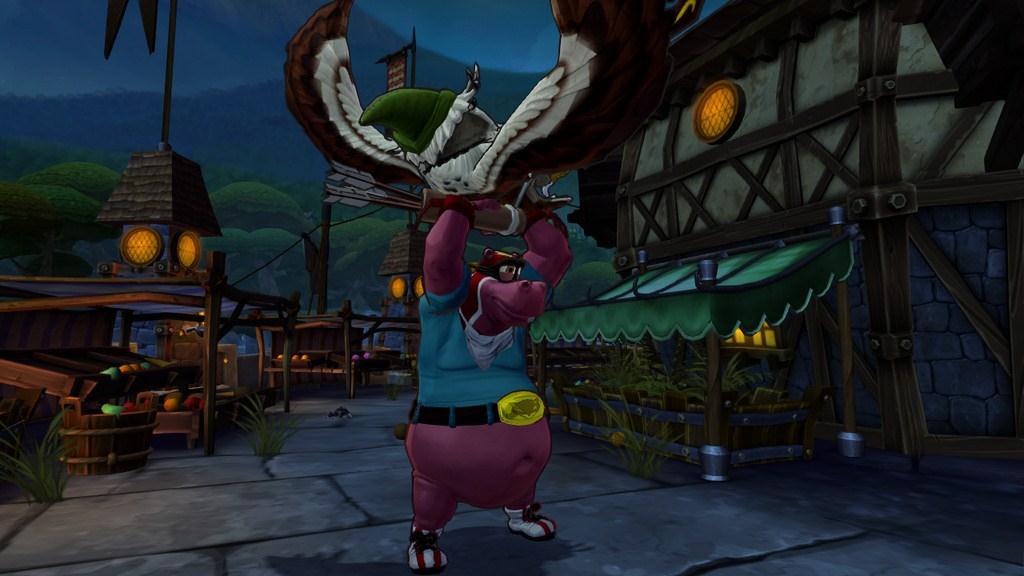 You and your team will venture to a a variety of settings (time periods) with a single “job” (heist) in mind; it isn’t as simple as pulling off the said job, you have to work your way up to it. This means that you are going to have to do a bunch of legwork to prepare for the heist, including gathering intelligence, scouting locations and sources of supplies, and taking out key targets who may stand in the way of your goal(s).

Although you will be doing the same sort of missions in each “world”, the game remains fresh all of the way through thanks to varied gameplay experienced throughout the game. While the game would be best described as a 3D platformer, you will spend time touching on numerous gameplay styles. There are sections of the game that play out as variations of the following genres: stealth, twin-stick shooters, third-person shooters, music/rhythm games, and flat out action titles. This helps alleviate the repetitive feeling that would normally accompany a game with a similar structure. Thankfully, that doesn’t happen here as things remain fresh throughout the entire experience.

The variety is also aided by the variety of characters present in the adventure. You won’t just be playing as Sly, Bentley, and Murray any more; the various members of the Cooper clan that you meet throughout time will join the playable cast as well as series stalwart and the love of Sly’s life, Carmelita Fox. Each one plays drastically different than the others. Sly and most of his ancestors are slow moving, stealthy characters. Murray is a brawler, bringing more action oriented gameplay to the experience. Carmelita on the other hand likes to come out guns blazing, bringing a shooter aspect to the experience. You will find yourself in some ridiculous situations too, all making the best of this variety; we’re talking ice skating competition between a grizzly bear and a pink hippo, a mech-battle featuring a wheelchair-bound turtle, and a variety of shooting galleries. All of it is done with a humorous feel that keeps the game lighthearted and charming. There is charm around every corner of the game. Regardless of the gameplay style being utilized at any given time or the mission in question, there is always loot to be lifted and seized for the good of your gang. You will collect coins all along the way and pick up high-valued prizes from your enemies to cash in. All money you earn can be spent on ThiefNet to earn additional skills and technology to aid you in your quest. Early on, these amounts to new abilities but later on it stems into technology that you can equip such as different types of ammunition and tools.

Having the same game on two different platforms means that there are some concessions that need to be made to the controls. There are a lot more buttons available on the PS3 controller than the Vita, but that never hinders the experience. The lack of buttons on the Vita made up for by the system’s touchscreen capabilities. Sanzaru did a smart thing and chose not to shoehorn any features onto the portable console; all of the implementation makes sense. Things such as the R2 and L2 buttons are mapped to marked spots on the gamescreen, and the clickable options of the analog sticks are attached to the rear touch panel. It isn’t always the most convenient option, but it is arguably the best option considering the differences in the interfaces. Tilt controls are used on occasion as well, which work just fine with both the Vita and the Sixaxis capabilities.

There is always something to do in the game, even when you don’t feel like following the course set by the story. The development team has packed in a ton of extras and goodies throughout the entire experience, including collectible items that unlock bonus costumes and features. If you aren’t tracking them down, you can always seek out more goods and coins to max out the abilities of your characters. There are even playable mini games like ping pong and Murray’s arcade. 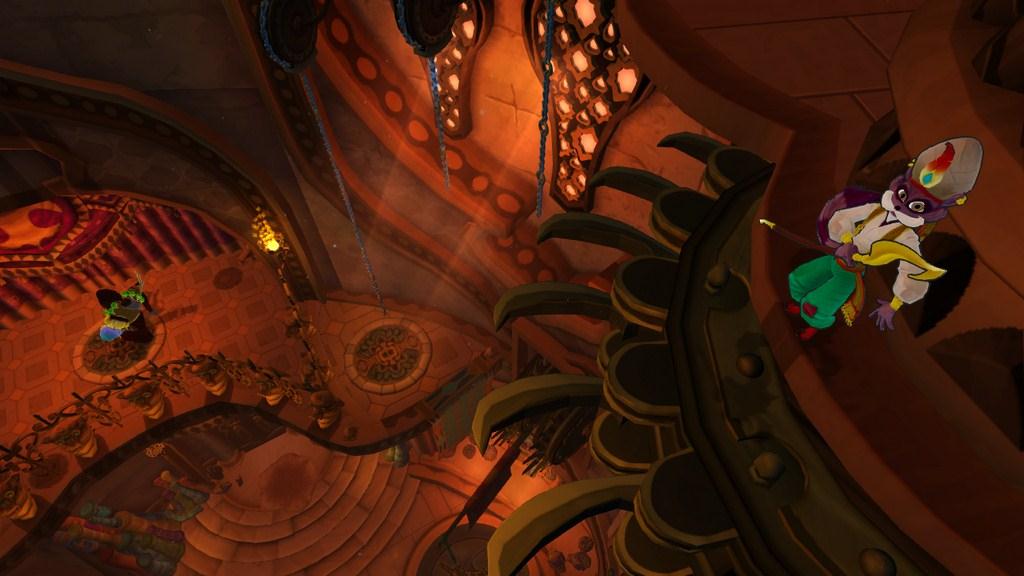 As fun as the game is, it isn’t without a couple of problem areas. There isn’t anything that hinders the overall experience, but there are some technical hiccups that do rear their ugly head. For one thing, the camera controls are incredibly touchy; too touchy actually. The platforming aspects of the game require you to adjust the camera which is normally constantly but it always feels too sensitive and it is very hard to adjust with any sort of precision. You have the option of inverting the controls, but not the sensitivity, which is drastically needed. Some of the Vita controls also feel a little awry at time. Sometimes the touch controls that are replacing the PS3‘s triggers don’t seem to recognize when being used on the fly; there are times when you need to do something such as switch in and out of costume in quick fashion and it just doesn’t work as well on the portable version.

Minor annoyances aside, Sly Cooper: Thieves in Time is one of the most enjoyable gaming experiences that I have had in a long, long time. It has its flaws, but what game doesn’t? Sanzaru Games has done a phenomenal job at crafting a new and enjoyable adventure for the Sly that maintains everything that made the past entries great. The discounted price and the cross platform capabilities of the game only work to strengthen the experience. Definitely check this one out if you want to be reminded just how fun games can be.
Despite a couple of technical hiccups along the way, Thieves in Time is some of the most fun that I have had with a video game in a long time. It translates well between the two platforms without losing any charm and has a ton of gameplay variety which keeps things fresh every step of the way. Anyone who says platform and portable games weren’t created equally definitely needs to play this game!