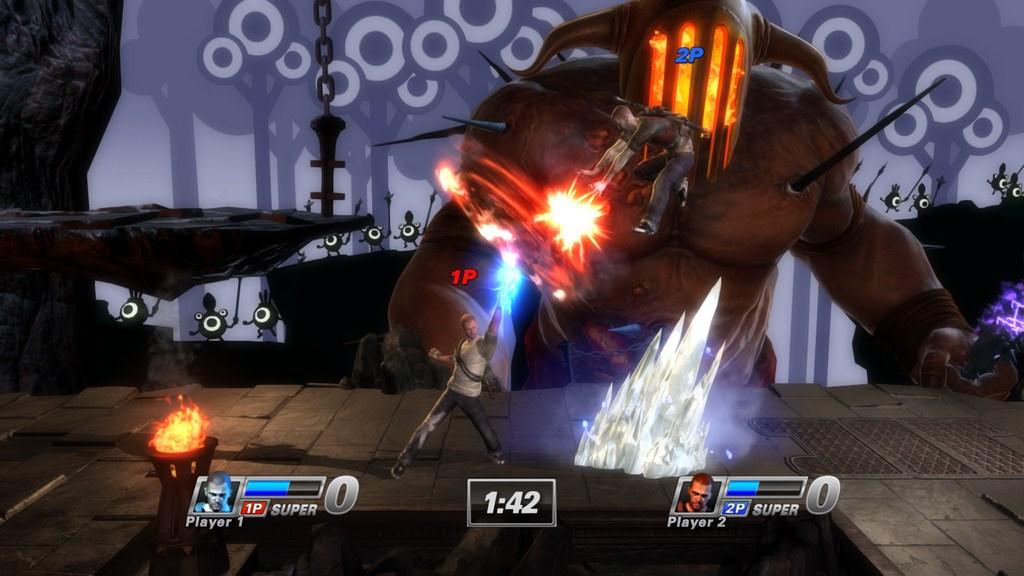 Written by Jeremy Duff on 12/24/2012 for PS3   Vita
More On: PlayStation All-Stars Battle Royale
One of the hardest aspects of life, regardless of your age, is admitting that you are wrong. It takes a strong person to step up and admit when they have done or said something that they later discover to be incorrect. As I begin to write this review, I find myself faced with that very dilemma. A few months back, I posted a preview of Sony and SuperBot’s PlayStation All-Stars Battle Royale. During my brief time with the game, I found it both immensely enjoyable and extremely comparable to Nintendo’s Smash Bros franchise; my comparisons between the two games was meant strictly as a compliment to the new game. Now, after spending countless hours with the final version of the game, I am forced to publicly admit that I was wrong... I was so, so wrong.

Although the games may look similar to one another visually, particularly in terms of the perspectives used, once you dig into the actual gameplay experience you will find that they are worlds apart. PS All- Stars is a much deeper and smarter experience than Nintendo’s mascot brawler; this is a true fighting game and not just a party game for players of all ages. You could pretty much think of this as the evolution of the mascot-fighter genre and everything that Nintendo’s series wishes it could be.

Thanks to a year of hype and promotion, the game needs little to no introduction. PS All-Stars is a gathering of prominent PlayStation characters from the history of Sony’s consoles, all battling out in an arena of up to 4-players. We aren’t just talking about characters from first-party Sony offerings; the game includes personalities from marquee titles dating as far back as the original PS One. In addition to Sony’s lineage, Capcom, Namco, Irrational Games, and even Konami have representatives present in this proverbial fight. Hell, even the final boss of the game is a long-forgotten mascot originally used for the brand prior to the first console’s release.

The variety of the game’s roster is the first area that I feel needs to be truly commended. Whereas similar games, and fighting games in general, have a habit of using similar characters simply to beef up roster numbers, the variety offered here is staggering. No two characters play alike, and that includes two variations of inFAMOUS’ Cole McGrath. Each fighter in the game is distinct in their arsenal and the tactics required to to master them. Because of this, the inclusion of 20 characters feels like so many more as they are 20 original and vastly different personalities.

The variety and amount of detail in the games stages is equally as impressive. Each of the 15 stages in the game is an experience of its own and most of them pay homage to at least 2 different games in their own right. The amount of “interactivity” featured in them all sets a new standard for fighting games; your arenas never finish looking the way that they start. You may begin battling it out in a simplistic, LittlebigPlanet style stage but you will end up on stage of the Buzz quiz show, complete with crowd interaction and trivia questions. There is so much to do within the stages in terms of avoiding traps and dangers to setting up your opponents with those same hazards, they almost become characters within their selves. Everyone will have favorites to play on but all of them keep the battle going in their own rights.

As I mentioned earlier, despite the looks, this isn’t Super Smash Bros. Nintendo’s series plays out more like a giant game of king-of-the-hill, where you battle it out to simply knock your opponents off of a ledge. It is simplistic, fun, and it works; I am knocking knocking that game in any manner for that fact. PS All-Stars however is a tournament level fighting game that puts more of a focus on the actual strategies and  mastering the unique abilities of the game’s playable characters. That fact isn’t apparent on the surface of the game, but once you spend some quality time with the game, it is hard to ignore. that is part of the magic of the game’s experience; there is a high level of accessibility that makes it an enjoyable game for players seeking a variety of experiences. Casual players and hardcore fighting fans alike will find their selves able to enjoy time with the game and it gives each a chance to play the game in the style which they like. 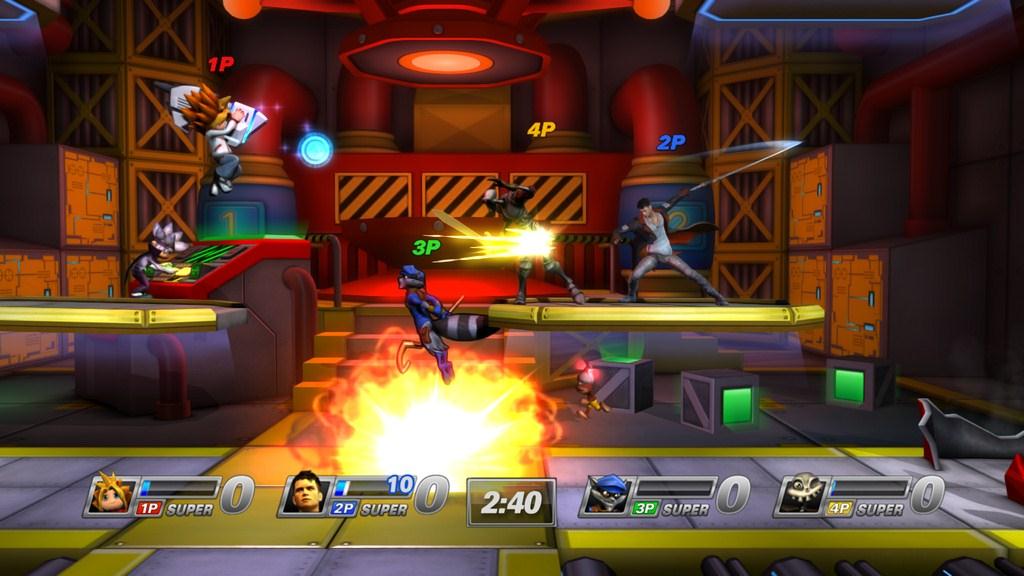 If you just want to pick it up and knock around some familiar faces, go right ahead. However, Superbot has built in a level of depth into the game’s core fighting mechanics that rivals some of the industry’s top franchises. We’re talking about knockdowns, pop-ups, interupts, and other common, competitive fighting game tactics, all present for those who wish to take advantage of them to do so. This leads to an plethora of gameplay options and modes that fighting game fans will absolutely love.

In addition to battling out through the basic “story mode”, which features brief introductions and endings for all of the game’s characters, there are a ton of training and mission modes featured that not only extend the life of the game, but truly teach you the ins and outs of the experience. Each character has a long list of missions that you can play through. Even though they are predominantly the same in terms of their goals (take out X amount of enemies with your level 2 super, survive this many rounds, etc.), the vast differences in the game’s characters makes them all feel different. Playing through all of Dante’s missions feels completely different than running through the list with Parappa. Completing them all with each character in the game feels like its own, unique experience, which says a lot for the game’s core design.

Of course, there are also all of the traditional options included such as online tournaments and ranked matches, as well as custom match settings for local-multiplayer and solo- experiences. There is a lot to do, and that number will only continue to grow as additional characters are added via DLC in the future. We already know that Kat and Emmett are on the way in early 2013, and those two additions alone will add in a couple of hours of gameplay for those who enjoy completing everything available with each character. Considering how many other characters could be added in the future (Lara Croft and Crash Bandicoot anyone?), this experience could be extended from here to eternity.

The game gives you reason to play through all of the missions and modes with everyone as well, beyond just being able to say that you have done it. Regardless of the mode of play, using a character levels up an experience bar unique to each character and additional taunts, costumes, colors, and options are made available as you progress through the experience ranks. This adds a level of “pick up and play” not seen in a lot of games; you can spend a few short minutes with the game and still feel like you have accomplished something. Conversely, you could also spend hours with it and not get bored at the same time. 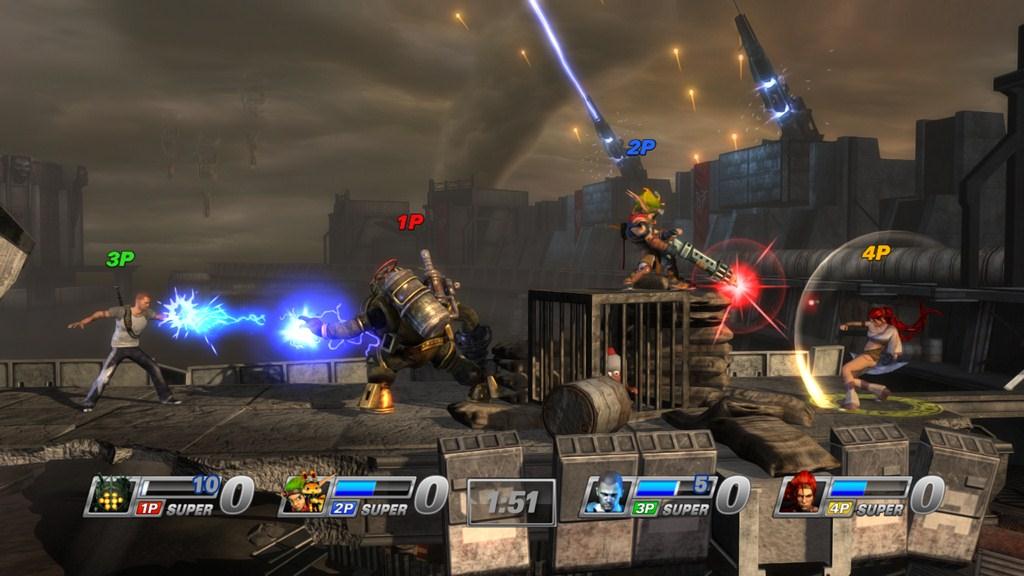 Just because I have expressed nothing but praise for the game thus far doesn’t mean there isn’t room for improvement. The crux of the gameplay revolves around building up your super meter and unleashing one of your three levels of super-attacks; however, it isn’t used for anything other than that. If you manage to miss your target with those attacks, you have basically blown the match as that is the only way to really score kills in the game. The game needs to offer another means of scoring points for the sake of securing a victory. There are a lot of balance issues in terms of the game’s super attacks and some are far more superior than others; this can become annoying at times as everything that you have worked for can be wiped away with a single, blown attack. It would also be extremely nice to spend your super bar as you see fit rather than in an all-or-nothing fashion. If I have 3 levels of super, I should be able to choose to unleash one giant super or execute my level 1 three different times. Unfortunately, that isn’t the case. You have one shot and it takes everything that you have stored up, whether you want to or not.

There is also some serious room for improvement in terms of the mode variety of the game. Yes, there is a lot to do in the modes included as I praised it for earlier but there could easily have been SO much more. The adventure mode is the one aspect of the Smash Bros. franchise that I feel is vastly superior when comparing the two; it is unique and original and something that fans can enjoy, even if they aren’t into battling it out with other players. This game lacks that universal appeal that mode brings to Smash Bros.

At the end of the day however, the overall experience that the game provides is an excellent one. That is especially amazing to me when you consider that this is just the first entry in what could be a long running series. For their first entry in the genre, SuperBot has done an amazing job. They have shown that they not only have the chops to craft an insanely competitive fighting experience, but also the ability to make it accessible to players of all skill levels. That is the one aspect that many fight series struggle with, especially in the current generation of the genre. Whether you are looking for a quick fix amongst friends or interesting in throwing down with in the competitive circles online, the game will give you the experience your looking for and at a value price if you buy the PS3 version (which includes a digital version of the Vita game).
DO NOT call PS All-Stars a Smash Bros. knock off, it is actually anything but a copy or clone of Nintendo’s fabled fighter. SuperBot has taken the most basic premise of that series and crafted a full-featured fighter that delivers something beyond the casual experience and that crosses over into the competitive fighting realm.