Publisher Electronic Arts announced the second season of post-launch content for Battlefield 2042 called Master of Arms. The new update drops on Tuesday, August 30th with a slew of new content, including a new map, a new Specialist, new weapons and gadgets, new vehicles, and a fresh Battle Pass with 100 tiers of unlocks. 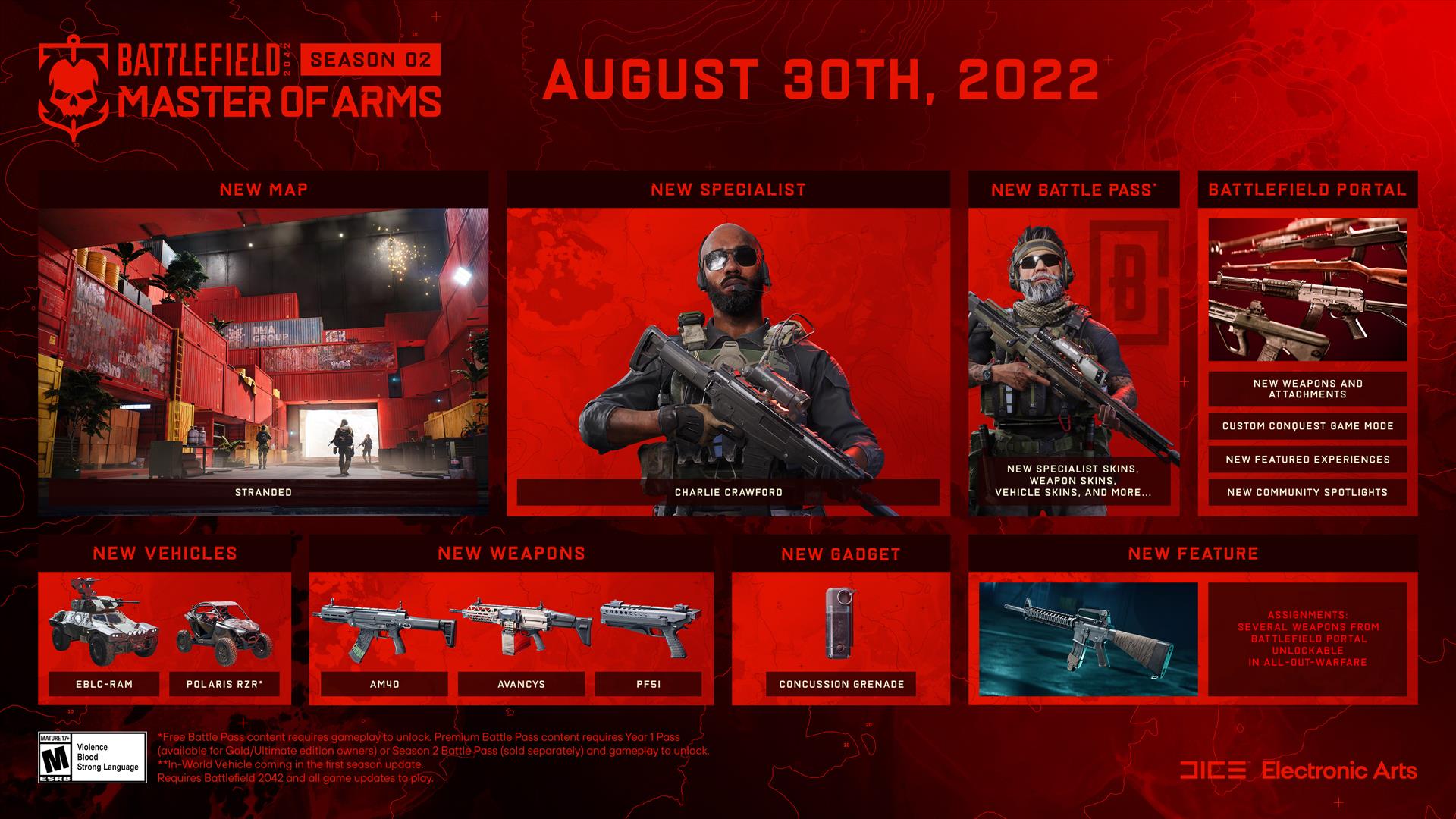 The new Specialist is a British operative and ex-arms dealer named Charlie Crawford, who brings with him a new gadget called the Mounted Vulcan stationary minigun and the ability to refill teammates gadget supply when reviving them. Master of Arms also includes the addition of new weapons like the AM40 assault rifle, Avancys light machine gun, and the PF51 fully automatic pistol as a secondary weapon. The Concussion Grenade is a new gadget being added as well, in addition to two new vehicles—the EBLC-RAM which can act as a mobile spawn point for the entire team, and the Polaris™ RZR all-terrain buggy.

Battlefield 2042’s new map is called Stranded, and it features a tanker shipwrecked in the Panama Canal, with a focus on creating intense close-quarters firefights.

Check out the gameplay trailer for Season 2: Master of Arms:

August 25, 2022 - Today, Electronic Arts and the Battlefield™ team revealed Battlefield™ 2042 – Season 2: Master of Arms. Available August 30 on all supported platforms, this season brings a new wave of exciting content, including a new map, Specialist, weapons and hardware, updates to Battlefield Portal and 100 tiers of Battle Pass content. Core content additions, including the new Specialist, weapons, vehicles, cosmetics and more are available to all players as part of the Free tier track in Battlefield 2042’s Battle Pass*. Additional cosmetic items are earnable through a Premium version of the Battle Pass**.

In Season 2: Master of Arms, the Battlefield moves to the Panama Canal in the new Stranded map, where they’ll fight in a drained lake in and around a shipwrecked tanker: the Starg Ceres, now serving as an illicit arms trading hub. Players will fight for control over this dark market hive of military hardware. Upon entering the Starg Ceres, players will find an environment that favors close-quarters combat, with a high density of cover and short distances between objectives.

Charismatic ex-arms dealer Charlie Crawford joins the fray in Season 2 as Battlefield 2042’s newest Specialist. Charlie’s got a few tricks up his sleeve to give his team an edge; when he’s not pinning down enemies with his Mounted Vulcan stationary minigun – also usable by other Specialists, once placed – he’s helping his teammates by reviving them and refilling their gadget supply.

Season 2: Master of Arms also brings with it an arsenal of new weapons, new vehicles and a new gadget. The new AM40, a powerful carbine, is designed to offer a midpoint between an assault rifle and a submachine gun. Avancys, a high-tech light machine gun, maximizes mobility and attachment compatibility, ideal for intel-gatherers who want to provide fire support, while the PF51 blurs the lines between SMG and pistol, and features a huge magazine, ideal for fighting groups of enemies. The new Concussion Grenade is a throwable gadget designed to temporarily confuse and disorient to give you and your squad a tactical edge.

No-Pats can now move along the battlefield in the EBLC-RAM, a four-seater vehicle that can maneuver efficiently at lower speeds and place a beacon on which the whole team may spawn. Additionally, and coming in the first update of the season, players will also have access to the fast and fun Polaris™ RZR, a lightweight buggy designed to zip around the terrain.

New features in Season 2 include Assignments, a way to unlock weapons in All-Out Warfare which were previously only available within Battlefield Portal - starting with the iconic M60E4 and M16A3, with more to come in future updates. Players will also be able to use Assignments to unlock Season 1’s vehicles, weapons, and Specialist if they missed out the first time. Battlefield Portal will be receiving new Builder capabilities, greatly expanding the sandbox available to players. For example, the new Custom Conquest preset allows new rule modifications to the classic Conquest mode, while user-editable objectives will spawn many novel game types. Plus, the first update to the season will bring with it additional Battlefield Portal content, including extra-small playspace options to allow for intense close-quarters experiences, as well as five classic weapons from across Battlefield 3, Battlefield Bad Company 2 and Battlefield 1942.