I may never make it off the first island in Valheim

If you would’ve asked me just last month to jump into Yet Another Survival Sim, I would’ve respectfully asked you to go jump in a lake. I’ve done my time in Minecraft, The Long Dark, Subnautica, and No Man’s Sky. I’ve put a hundred hours into Conan Exiles, 7 Days to Die, RimWorld, and Fallout 76. So you’ll have to pardon me if I’m not interested in—

—Ooh, what’s this? Valheim? Hi, Valheim. See, I’ve got a lot going on right now. Not sure if I...We’ll be staying up until 1:00 a.m. every day for the next couple weeks, you’re saying? I’ll still be changing the baby’s diaper at those ungodly hours? I’ll still be up at six to make coffee and fix everyone breakfast? No, I can’t take naps in the middle of my regular workday? 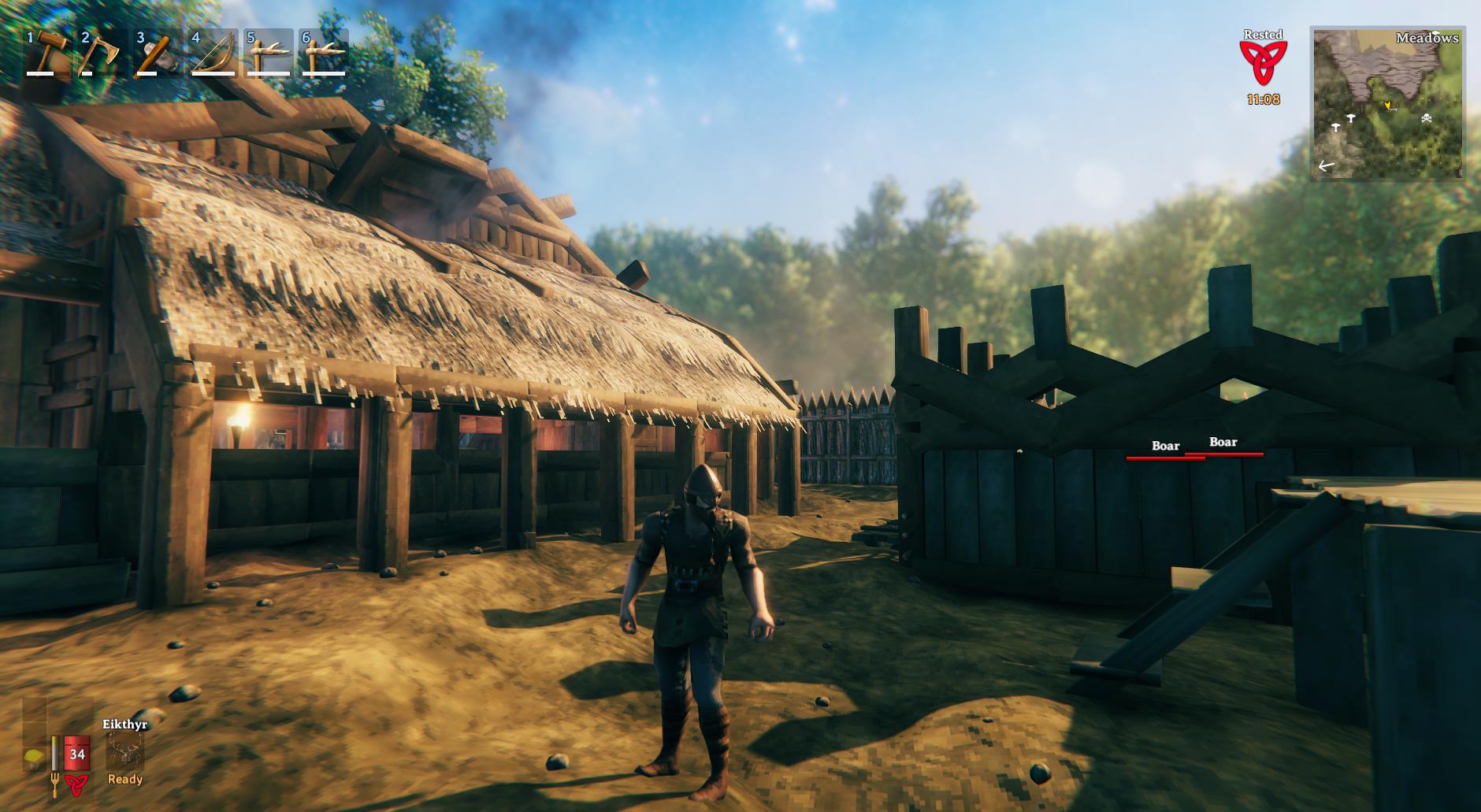 While our own John Yan is making his own fun in Valheim, trapping trolls, with tears of joy rolling down his face, and our other Jon (Jon Krebs) is crafting his Valheim saga in the shape of a sea shanty, I’m one of those vanilla players. The kind that logs in, sees that he could eat another bite, sharpens the ol’ wood axe, then heads off to the edge of the forest for some clearcutting. Do I have any shortcuts for this part of the process? No. But am I fast at building decent-looking structures? Also no.

I bring back as many logs as I can manage, some 300 pounds’ worth, then start looking real hard at our co-op compound. I’m squinting at the gaps between the workbenches and the outer wall. Can I try building a roundhouse between the main hall and the gate? Maybe I could sneak a lovely A-frame bunkhouse next to the boars. Sorry, the boars are now in the “Gucci pigpen” after I spruced it up with an inordinate number of stanchions and cross pieces. 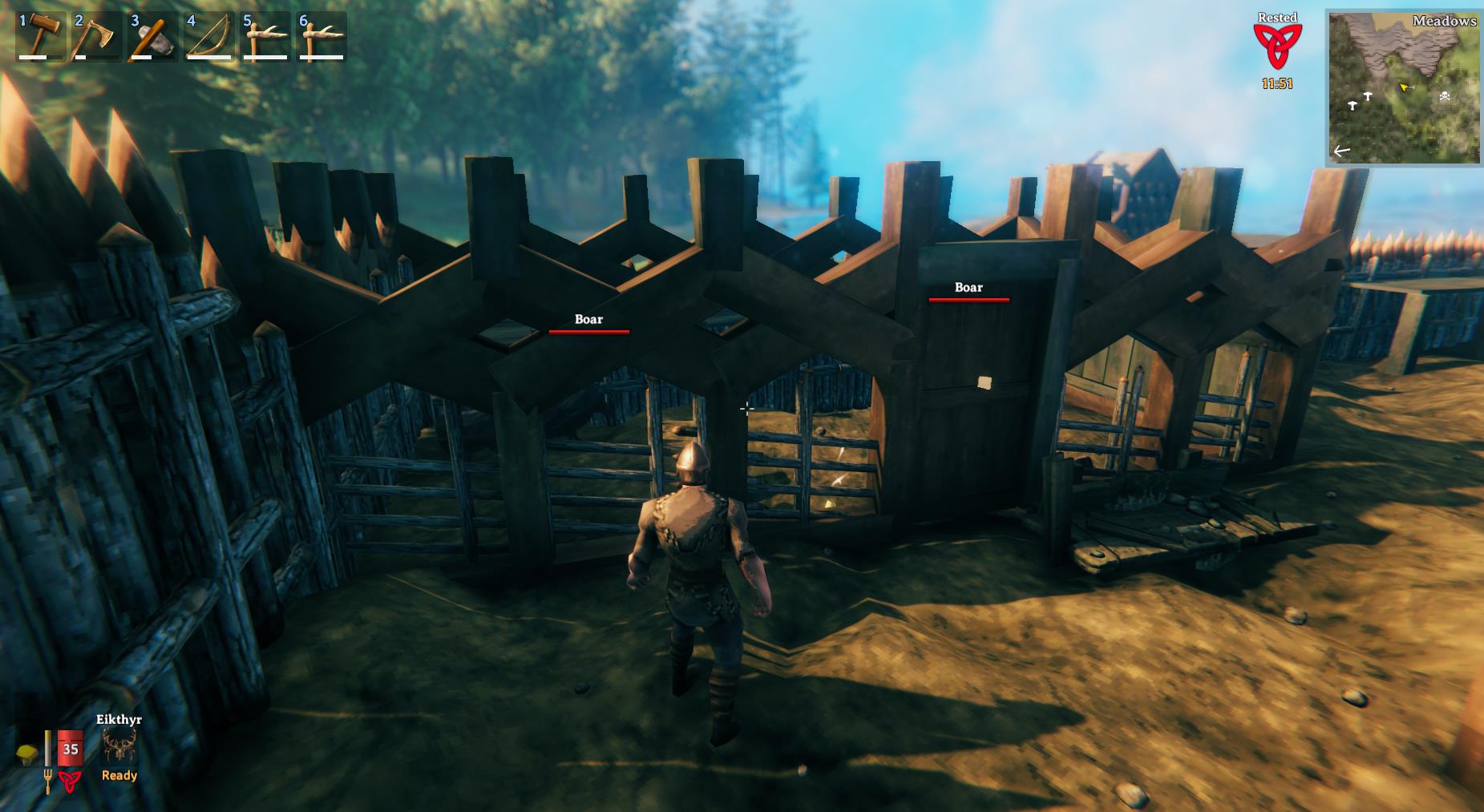 It took as much lumber to leave the pigs living lavish as it did to dress up the wall with something more Skyrim Riverwood-looking. A simple two-foot-wide walkway would suffice along the sharpened log wall. But I can’t leave well enough alone. I’m not here for function. I’m here for that Viking fashion. I’m not even talking about my helm and tunic. Not even worried about that part. I’m talking about Viking architecture as a fashion point.

Look at these gates. They don’t even have 45-degree support beams and thatched roofs over them. How are you supposed to stay dry in these soaking-wet rain storms for the split second it takes you to open and close them again? You can’t! You can’t stay dry without gate roofs! So I build gate roofs. 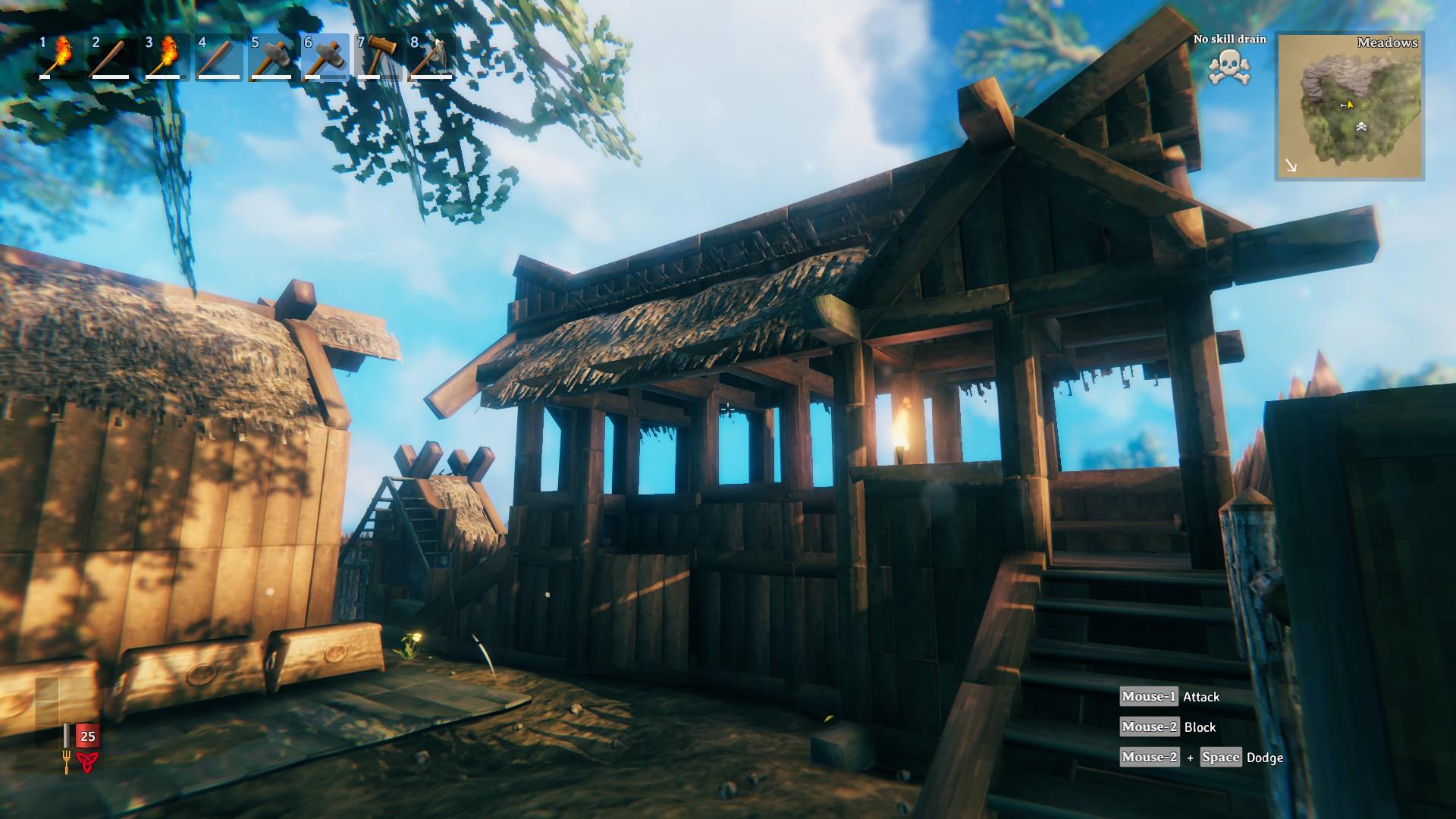 Ok, so the round house is done. It’s structurally sound. But I need those kickstand pieces coming out the sides. They’re completely unnecessary and entirely a waste of time and resources. But they sure look good. Build those, too.

Will our main hall stay standing without cross beams for support every 10 feet? Absolutely. That thing will stand for a long, long time with practically no maintenance. But that’s not good enough. There’s no character. And when I’ve got a game that lets me be architecturally creative, “character creation” doesn’t stop the moment I pick a braided hairstyle and beard. I have to build character into the perfectly fine and structurally sound interiors. Get some cross beams up there, boyo! 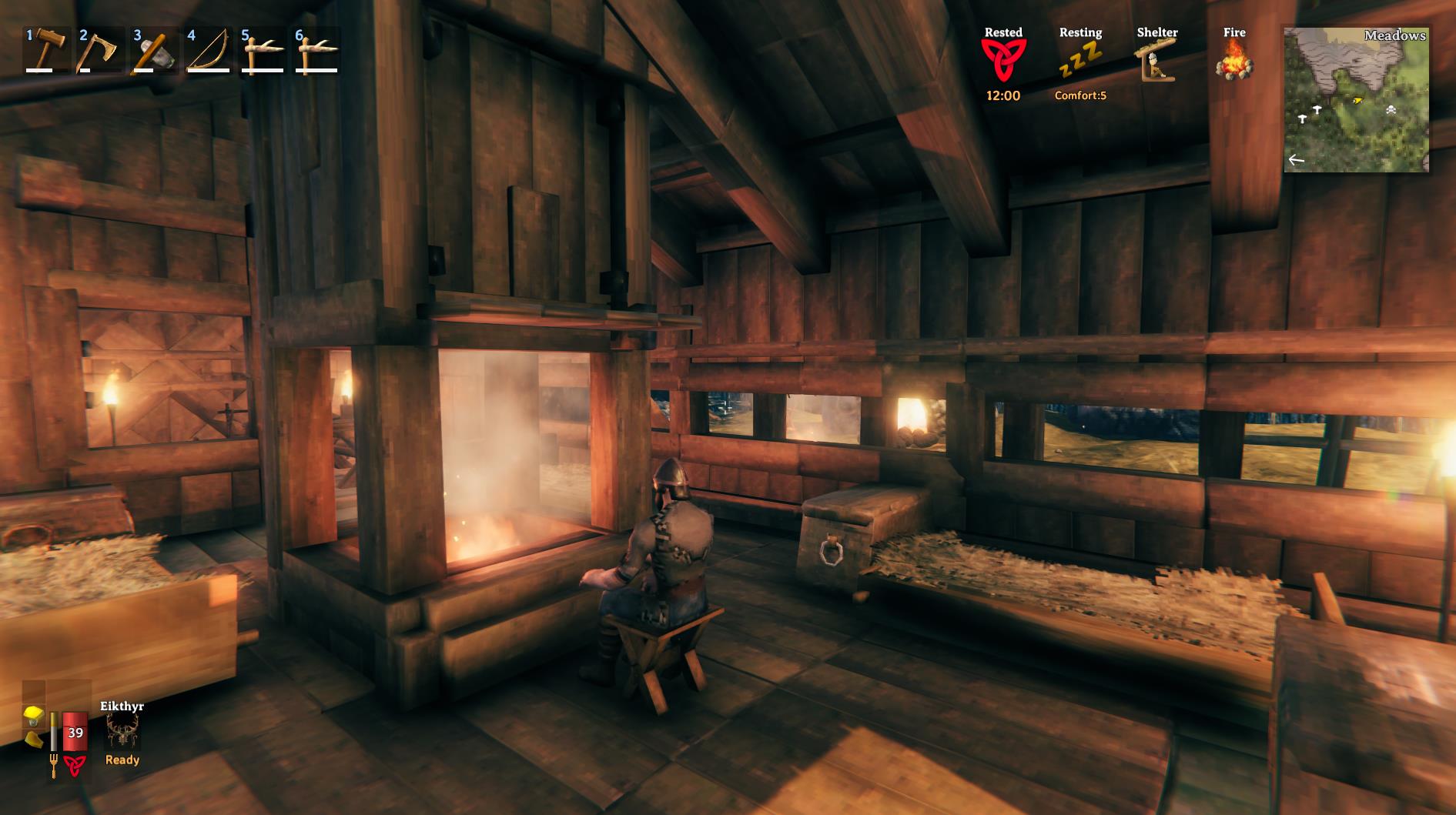 Does all of this require a dozen more trips to the forest for wood gathering? Why yes, yes it does. Are the hours just flying by without a care in the world? Yes they are. Is the baby crying for diaper change number one-of-three for the night? Ha. Haha. Yep, that’s her. She’s my new alarm clock. Except not that kind of alarm clock. She simply alarms me to the fact that I’m up too late during the workweek. Again. And that there’s not enough coffee in the world to get me through the next day.

But it’s another evening, the baby just went down for beddy-bye. I hear there’s an entire video game out there in Valheim. Bosses, new biomes, even an end game! I wonder what that’s all about. But these beech trees ain’t gonna cut themselves down. And the guys I’m playing with on the server said they wouldn’t mind if I prettify their homes, too, so I should probably hop on that. No, I ain't got time for another survival sim in my life. Except for maybe just one more. 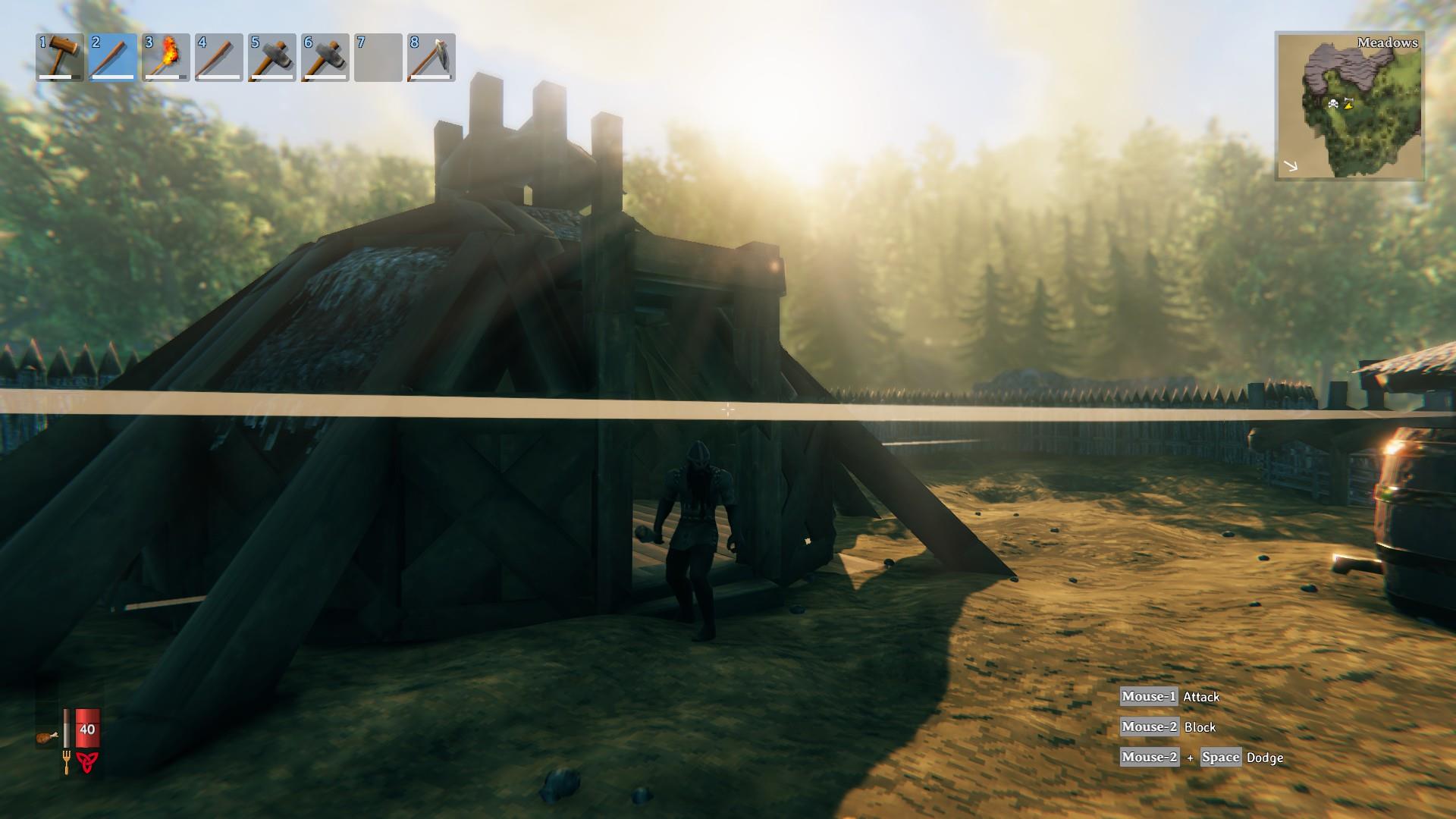