Sex sells and everybody is selling something in Cyberpunk 2077 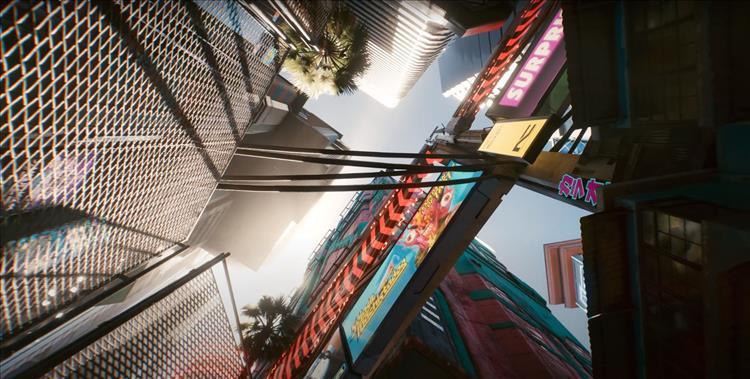 Remember Ruby Rhod from The Fifth Element? Character was so over the top it nearly ruined the entire movie for me. Little did I know that 23 years later so many YouTube and Twitch influencers would be striving so hard just to recreate that character portrayed by Chris Tucker.

Cyberpunk 2077, despite being 57 years into our future, seems to have a rash of always-on characters striving to recapture the seemingly oblivious pizzazz of today's biggest streaming personalities. This video captures the cultural disconnect between the mean streets of Night City and the entertainers putting on overstated happy faces for their audiences. Not that good food, good shows, and good people can't be found in Night City, but it's no mistake that these personalities are being portrayed as clowns.

There are people out in the open with their faces strapped into VR headsets. Anti-corporate punks stuck in a world with corporate messaging surrounding them on all sides. Hypersexualized ads running up and down every building and wrapped around every block. All this while "I want my money on the double" is stuck in a dance-looped soundtrack.

There are beer cans jammed between breasts, bottles of alcohol serving as an analog for penises, strippers in fishnets, guys getting virtual lap dances, and posters of bikini-clad women blocking views on dozens of apartments at a time.

One of these TV personalities is cognizant enough to say, "We are f---ed, America," but also shrugs it off with an, "I don't know how we're gonna fix it." Ah well. Homelessness soaring, trash piling up in the streets and alleys, doubled-up crime rates, and cybernetic replacements for anything and everything on you that used to be physiological. And after a series of gunfights and explosions, internet darling Keanu Reeves tells you, "On your own, you're f---ed."

Looks great. Can't wait to adjust the size of my junk and head out into Night City. Just watch out for those Ruby Rhods, those Mr. Steal Your Girls.