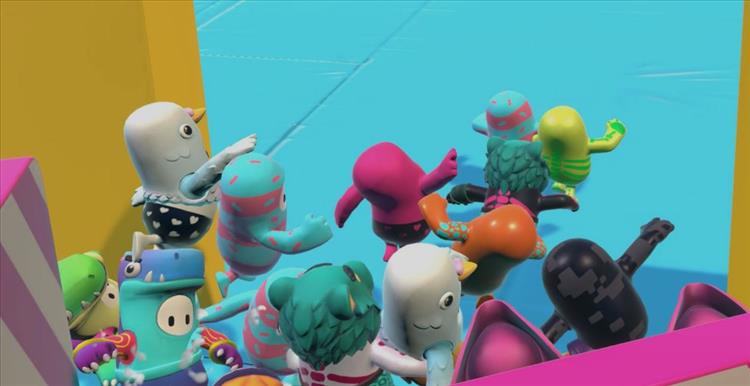 The best thing about Fall Guys is that you can always claim you were robbed. You were robbed of that win right at the end, somewhere in the middle, or even right from the start. Someone grabbed you, the gate was too crowded, the obstacles unpredictable. It's okay to hate Fall Guys. You were robbed.

You can claim you were robbed—whether it’s true or not—because the stakes are so low. The stakes are so low that none of it matters. And that’s the second-best thing about Fall Guys: it doesn’t matter. None of it does. Were you the first of 60 bean dudes to cross the finish line? Were you the last of 40 to qualify? Were you disqualified as the last bean in the race? Doesn’t matter. There’s always another race, another obstacle course, another whirlygig to send you flying off the side of a spinning platform.

Which brings us to the other best thing about Fall Guys: every win feels great.

Wait a sec, you say. How can a win matter when none of it matters? How can you claim to be robbed except for every single time you cross the finish? A win matters because you can claim a confluence of luck, skill, and determination brought the win. Just like you can claim bad luck, goofball gameplay mechanics, and apathy when you lose.

I love Dizzy Heights. I hate Slime Climb (everybody hates Slime Climb). I love Gate Crash. I hate whatever that memory one is with the fruit. You have your plethora of excuses whenever you lose, even on ones you love. And you have all your bragging rights whenever you win.
Fall Guys the battle royale isn’t brilliant. Fall Guys the internal narrative about winning and losing? That’s the part that’s brilliant. Those little bean dudes will tell you about yourself. Whether you’re a sore loser or a sore winner, whether you’re gracious when disqualified or humble across the finish. This isn’t a role-playing game, but you’re going to find out real quick, when it comes to competition, if you’re Good or Evil, Hero or Villain, Paragon or Renegade.

My 10-year-old is learning about herself, too. During the loading screens, she’ll chant her favorite course names in the hopes it could affect which course is next (of course her chanting doesn’t affect that). Sometime near the beginning of every 60-bean race she will shout the almost Biblical “Last bean shall be first bean!” And she always lets out a nervous groan whenever she realizes she’s made it to the final round. She particularly cheers on plain-looking beans, players that are so new they haven’t even customized themselves yet. She declares anybody that grabs and holds onto her as an out-and-out meanie.

Even though she’s dying to ask me for $10 so she can buy the DLC pack with the pirate outfit, she’s informed me that she will unlock all of the other in-game things she can on the Kudo Koins experience ladder before she asks for the cold hard cash. Finally I’ve done something right as a parent. I’ve instilled a sense of having to earn it. And hey, if she gets enough enjoyment out of Fall Guys to actually max her level, then I’m more than willing to throw an Alexander Hamilton at the developers. Good job, kiddo, you earned it. Good job, Fall Guys devs, you earned it, too.

So, no, Fall Guys doesn’t matter. Except in every character-building instance where it does.