All respect to the rest of the world, but I hate Fall Guys. I hate Fall Guys deeply, with all my heart. I've tried to love it. Indeed, I see why people DO love it. But I hate it beyond all reason. Everyone else in the universe seems to be having a glorious time with Devolver Digital's new bumbling battle royale, but I can barely touch the controller without being gripped with a terrible rage that makes me want to take a sledgehammer to my PS4. Just the sound of the soundtrack music drifting through my house makes my heart start beating too fast as angry adrenaline floods my veins.

Having built up an amazing amount of masterfully planned hype with streams and betas before its release on Steam and PlayStation Plus on August 5, Fall Guys is having a moment that most video game developers and publishers can only dream of. The game has grabbed the public much in the same way that Rocket League did a few years ago. Except Rocket League was..you know...a game.

I don't even know what to call Fall Guys. Is it a game? Well, kinda. Fall Guys is a game the same way that jockeying for position in rush hour traffic is a game, and I like it just about as much. Watching a round of Fall Guys is like watching a group of toddlers fighting at the bottom of a ladder for a playground slide. There's a lot of screaming and pushing, and no one really gets very far. Fall Guys feels less like a game and more like one of those psychological experiments where some sadistic evil doctor zaps innocent people with electrodes while cheerful circus music cranks endlessly in the background. It is a nightmare. 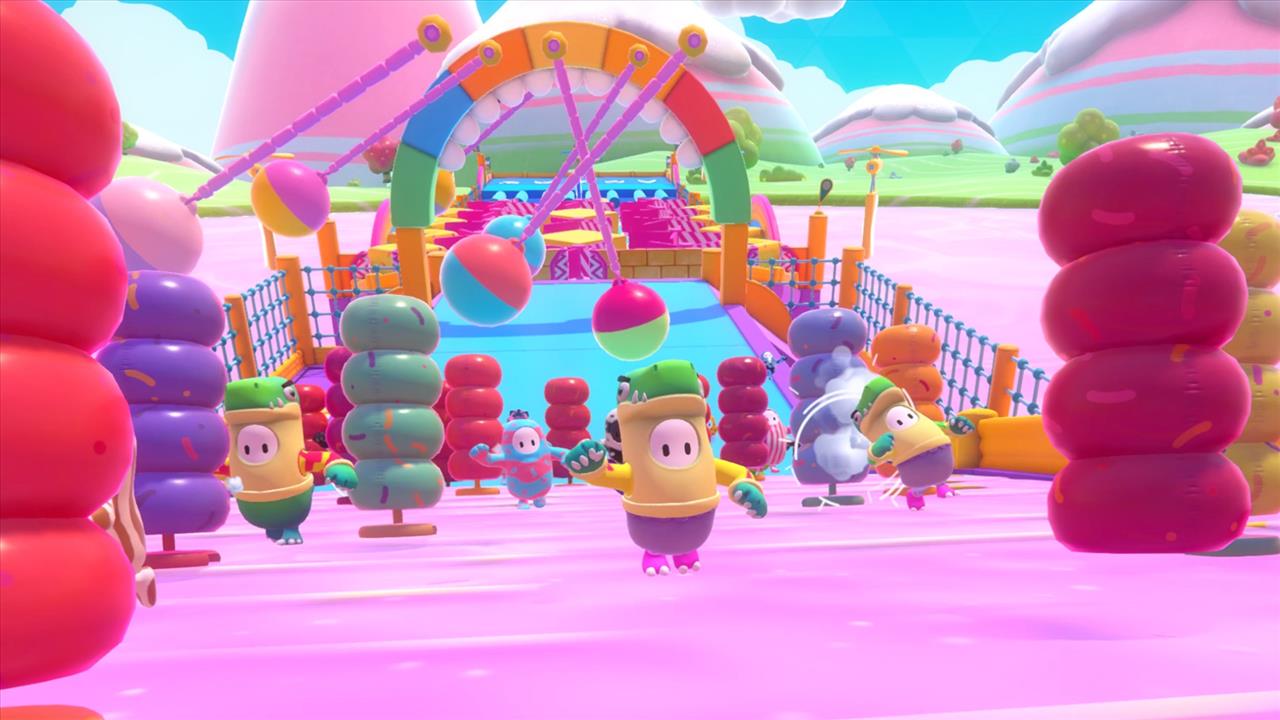 For the two of you that aren't familiar, Fall Guys is a new non-violent battle royale game - and much credit should be given for that. Players take charge of little Tylenol capsules with feet, which they can decorate in a variety of cute ways. All of the capsules are lined up at the start of an obstacle, usually a foot race. When the race starts, they rampage over each other to get to the end like a hoard of little Tylenol zombies. Players have a few basic moves at their disposal - none of which work very well. Your Tylenol zombie can jump, slide, and grab other players (if you feel like being a dick).

The first players to make it to the finish-line are safe. They move on to another race or challenge, until eventually someone wins in the fifth round. If you lose, you can either hang out and watch the rest of the match (but why would you?) or start over again. There is a lot of losing, and it is infuriating.

My problem with Fall Guys is a personal one: I hate for stuff to be in my way. If I'm walking through my house and my kids have left toys scattered about, I get instantly angry. If I'm on the freeway and some chump is driving 40 MPH in front of me, I rage at the universe. It's internal, I don't lash out at anyone or anything, but my insides boil with acid and bile. "God, you idiot, MOVE!" I shriek at my empty car.

Fall Guys is an entire game based on the premise of idiots being in your way. Even if they are skilled players, people still get caught up in the crowd constantly, jostled about by forces not under their control and flung all over the place. The whole exercise plays like a game of competitive Goat Simulator - with more pastel colors, but just as impossible to control. The courses are littered with whosits and whatsits galore, which send players flying off in any direction. It is entirely possible for the crowd to carry you into an obstacle, which then sends you flying off the map through no fault of your own. This makes me want to snap my controller in half.

Further complicating the situation is the camera, which seems programmed specifically to zoom in low on the back of the crowd, obscuring your view of your own character in the writhing mass of fools. Keeping track of yourself in the hive is half of the battle, and its a battle that I'm constantly losing. Also egregiously offensive are the team games, which force players to work together with the clowns that were just trying to push them off a ledge in the last challenge. Players are entirely reliant on a team of strangers - likely made up of children and small animals - with no means of coordinating themselves. You might as well roll dice or flip a coin to see if you will survive.

My situation isn't helped by the fact that everyone in my house loves Fall Guys. My kids want to play it constantly. The sounds of their screams echo through the house. The one playing screams. The ones not playing scream at the player, giving advice and admonishing them for falling down. They scream strategies at each other, then scream when the strategies fail. No game in my house has ever generated so much screaming. I hate it with all my heart.

"Daddy, do you want to play Fall Guys with us?"

"No sweetie, you know that Fall Guys makes daddy want to do murders. You guys go ahead and play, and I'll be in the basement hitting myself in the head with a hammer."

I'm glad that everyone is having such a good time with Fall Guys, and I'm deeply happy for Devolver Digital - which is the video game company equivalent of of the funny kid in the back of the class that everyone is secretly in love with. But you have to know when something isn't for you - even if that something is the popular thing in the world. And Fall Guys isn't for me.

If you need me, I'll be outside creating yard work for myself to do. Call me when the screaming dies down.