Stadia finally opened the door of silence a tiny crack today and let fans have a peek at some of their upcoming games in a new community blog post. 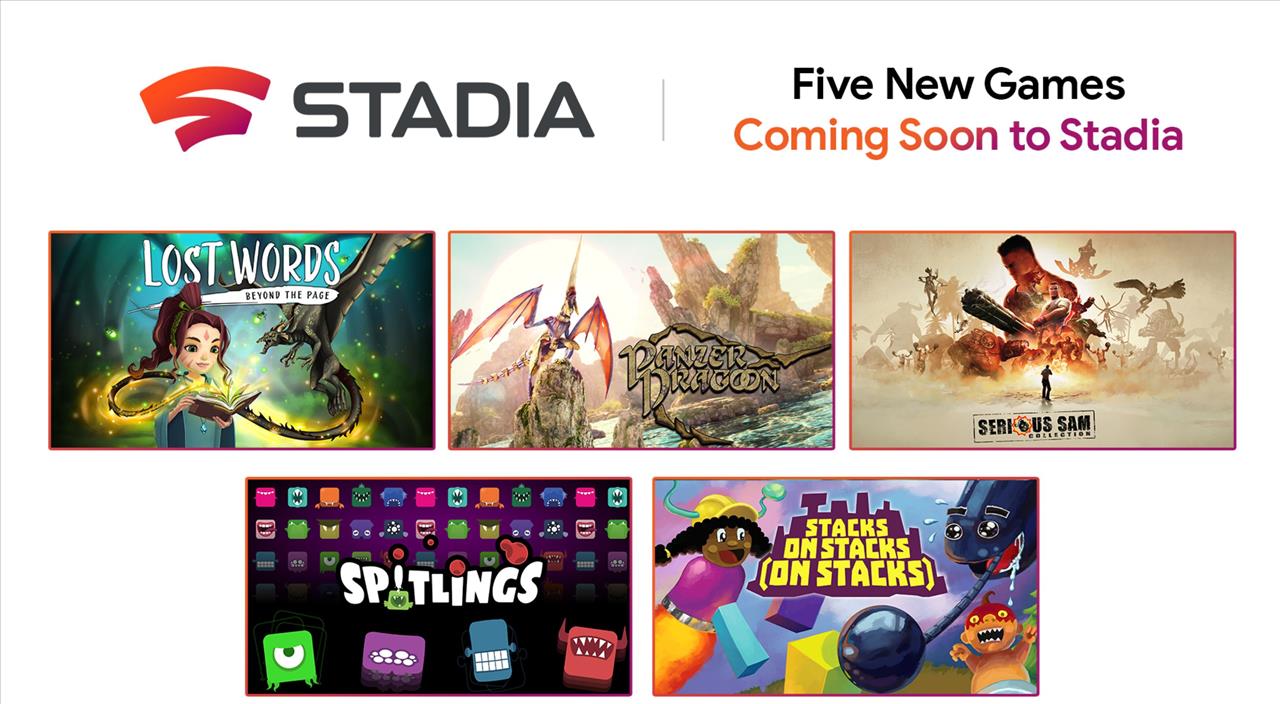 The five games announced are Serious Sam Collection, Panzer Dragoon, and the "First on Stadia" titles Lost Words: Beyond the Page, Spitlings, and Stacks On Stacks (On Stacks).

It is delightful to see this library begin to flesh out a bit. After the initial barrage of blockbuster titles, it is nice that some indie titles and smaller well-known franchises are making their way to Stadia. I actually played an early build of Stacks On Stacks (On Stacks) at GDEX 2018, and can confirm that it is a fun physics-based puzzle game. I played the two-player vs. mode with my son, and we found it pretty fun and funny.

How about we look at some trailers and some official blurbs?

Lost Words: Beyond the Page.

"Lost Words: Beyond the Page is a narrative-driven, atmospheric puzzler set inside the pages of a young girl’s diary. Following an immersive story by renowned games writer Rhianna Pratchett, players guide an aspiring author through the wondrous fantasy world of Estoria, where words wield immense power. In Lost Words: Beyond the Page, players interact with the words themselves to solve challenging puzzles and unique platforming segments to progress through an evolving landscape.

"Winner of over a dozen game awards and accolades, players will leap through the diary pages to uncover an emotional tale of loss and personal growth that will test the protagonist, Izzy, as she embarks on this highly decorated, groundbreaking adventure."

"Step into the shoes of the legendary action hero Sam "Serious" Stone and experience one of the most explosive shooter game series of all time as you save the world from a merciless alien invasion. Visit the ruins of ancient Egypt and roam through the vivid arenas of South America fighting seemingly never ending hordes of enemies using an extremely destructive arsenal including shotguns, heavy lasers, rocket launchers, a huge cannon, and an iconic minigun.

"Tired of playing alone? Go to war against Mental's horde with up to 16 players online or 4 players in local co-op, blasting your way through the campaign or the stand-alone survival mode.

Stacks On Stacks (On Stacks):

"Stacks On Stacks (On Stacks) is a zany 3D tower builder. Play as the Master Stacker, Rockit, who must use her psychic helmet to clean up the colorful bricks falling all over her madcap world. Build stable towers by executing architectural feats of balancing. Incorporate an array of mixed-up materials such as famous works of art, aquariums, magnets, and more into your gravity-defying structures."

"All the while, defend your towers against invading ghosts, a fireball-breathing dragon, and other outlandish hazards. Once finished, epically destroy what you built by knocking down your completed towers with a giant wrecking ball.

"Stacks includes an extensive single-player story mode as well as local co-op and split-screen versus options to enjoy the game with a friend."

"You know what the problem with multiplayer games is, right? The other players! It’s always THEIR FAULT if you lose! We’ve got the perfect game to blame your friends for their incapability: Spitlings! This action arcade chaos game for up to four players is a modern take on the hardcore classics. You’re in control of a Spitling, a charming rectangular creature with teeth it can spit or use to jump! Makes no sense? Who cares, it’s FUN!"

Panzer Dragoon: Remake (had to pull this old Switch trailer, as Stadia didn't include a new one):

"A new, remade version of the Panzer Dragoon game - true to the original, with improved graphics and controls, that suit modern gaming standards! On a far, lone planet, you encounter two dragons awaken from the ancient times. Armed with a deadly gun from the past and the guidance of your armored blue dragon, you must fulfill your destiny and keep the Prototype Dragon from reaching the Tower or die trying."

All in all, I'd say that these are some solid additions to the Stadia library - and they likely won't cost $60 each. Let's be real here - no human on the planet has played through every single game that released on Stadia so far. A lot of the negativity surrounding the lack of game announcements is just rabble-rousing. But still, variety is nice, right?