The final days for the PS4 B.E.T.A. of Fallout 76 saw their end this weekend, and I could not be more confused. And just because I now have two more days to play it.

I mean, I know it's gone, and that's fine. I'm actually pretty okay with that, but what I'm confused about is just how useful my time with the game actually was. Ending my time with the game at an okay level 13, I explored some of the main towns (Flatwoods, the ski resorts to the east, and the coal mine to the southwest), racking up plenty of weapons, both level-appropriate and higher, along the way.

I'd been on an exploring run for the past few days of the beta, and I came across a giant mutli-link building called Palace of the Winding Path or something like it, and an event popped up, telling me to light a brazier for guided meditation. I was by myself, as the person who I'd originally run into wasn't online, so I went about completing the objective. And then the super mutants attacked.

If you've read the other  two posts in this little series, you'll know that it's important to have others to play with in the game world. I ran into Level 30 Cave Crickets on the first night of the beta for goodness' sake! And it took practically our entire arsenal of weapons to take them down! I didn't have any teammates to help me out when the level 10 super mutants attacked the yoga palace, and since there were a lot, I wasn't prepared to properly defend the objective.

Now, since Fallout 76 has brought back weapon degradation, and to my knowledge one can only repair a weapon at a workbench. So that makes things pretty hard if I want to take everyone with a high damage shotgun that degrades darn fast if I use it frequently.

So I ran, leaving the Palace of the Winding Path to its doom. The prompt telling me to go back appeared on the screen, stating that I'd miss out on a reward if I did't go back. But I didn't care. The game doesn't provide for me a way in which to complete the game like the old Fallout did. Truly, without NPCs, there is no way to interact with the wider game world without shooting something.

It especially sucks when the one shooting at you is another person. 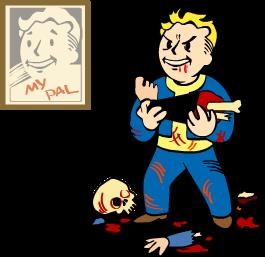 Near the ski resorts in the eastern portion of the map, before you get to the high-level zone, I encountered a player who, in response to me saying hello, started shooting at me. Nothing on voice chat, no emojis. He just started shooting at me. I wasn't taking a whole lot of damage, but I was getting annoyed. I had some good weapons in my arsenal, mostly .45 revolvers and a hunting rifle or two. So on one his shots, I said, verbatim "well, if that's what you want".

And then died. Because this particular player rushed me with a shotgun.

And did I mention that I was level 12, and this jerk was level 10? That was the thing that rubbed me the worst. But I fought back against some random player, and lost. And to pour salt in the wound, when I respawned, the jerk popped up in an area that I entered, and all of the high level ghouls and even a Yao Guai ran after me, rather than them. I know that this is just par for the course with this type of multiplayer, I've played GTA V, but it's annoying. That was Saturday.

On Sunday, things were quieter. I explored, got lots of loot, and generally had a good time. But I was tired of being alone in the game world. I had encountered a few people on my very first day, but a lot of them were loud and obnoxious, particularly draining when someone just wants to see what the game has to offer. So I fast-traveled for the measly cost of 26 caps (it's not measly, I shouldn't have to pay for fast travel) to the Morgantown Airport, where I saw some players coalescing. I encountered a couple who either didn't have mics, or were on a team and therefore in their own chat room. I assisted with killing some Scorched, as we were on the same questline. They gave me a thumbs up emote, and I jumped, because I forgot how that works.

Seeing potential in a rejuvenation of the loneliness of playing the game solo, I invited one of the people to my team. They declined. It sucked, but I moved on. There are all sorts of different people that you meet online. Some of them are social, like the ones I met the first time I played, others just want to do their thing. The title of this article is an exaggeration of this feeling, but hopefully you get the point.

Lastly, however, I wanted to talk about the leveling of this game. In hovering over player icons on the map, I noticed that many were progressing alongside similar tracks. First day you might reach level four, second day you might reach level 7, by the third and fourth you should reach at least 12. But there was one player I saw that attained level 25. Now hey, I understand that if you really grind in a Bethesda game, you can level pretty high. But 25? What could someone possibly be doing with all the time that the beta was available? Community events? Grinding quests? Killing enemies that really don't offer that much experience? I don't know, but it's a tad bit frustrating that the player seemingly must go the game's way instead of their own way to advance the best path.