Today is the day that the new Cargo Runs are being added to Sea of Thieves.  In fact, the servers just came back online and the release notes have been published, so its time to see what exactly we are getting within this 1.3.1 patch. 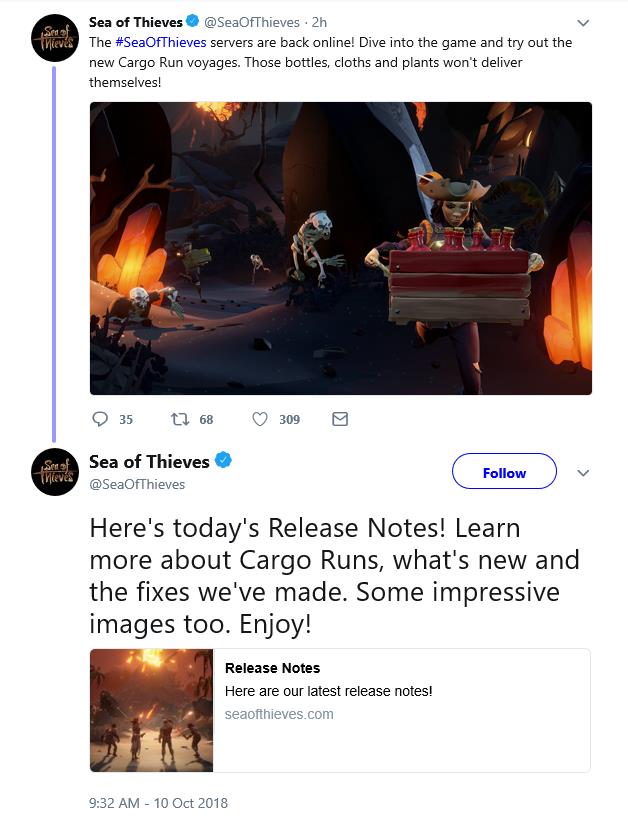 Running through the notes, in addition to the Cargo Runs, other updates in the release include Skeleton Ship Rewards, Rowboat Damage, Stuck Rowboats and Athena's Fortune Voyages.  In addition, there are 29 bug fixes listed, but there are still four known issue stat have not yet been addressed.  One item to note, you will need some space to update the game, here are the official patch sizes for download:

For full details on the Updates, Bug Fixes and known issues, check after the jump.

Rare also dropped a new Developer Update with Executive Director Joe Neate, discussing this update and the strategy moving forward on testing, releases, bugs and so forth.  really worth a listen to the 10+ minute video to understand where the game and Pioneer program is at moving forward, including the Festival of the Damned that will be the next update.

This week's update introduces Cargo Runs to the Sea of Thieves, alongside many fixes and quality of life improvements. Forsaken Shores will continue to run through to our next update, at which point the time-limited cosmetics will no longer be available to earn, but the rest is here to stay!