Pokémon fans speculate the return of a series classic

Earlier today, the official Pokémon YouTube channel released a new teaser video for Pokémon Ultra Sun / Ultra Moon. In case you missed it, give it a quick watch:

In the video, we're given some nice yet unsurprising updates. Among these are a reveal of new clothing options for our Pokémon trainers, as well as some new areas of Alola that weren't available in Pokémon Sun / Moon. Additionally, we see Dusk Form Lycanroc in action, along with a hint that only certain Rockruff will be able to claim this evolution as their own. On the surface, this isn't much of an update - but an update never the less.

However, what could be the most important detail of this video exists in a quick moment. Scrub your YouTube player to about 0:14, and you'll see a character dressed in what seems like red spandex, sporting a wild hair style. Remove your gaze from his flashy attire and take notice of the trash cans that surround him. For players who have been wrangling Pokémon since the original game, this will seem instantly reminiscent of Lt. Surge's gym. An electrical switch puzzle was all that protected Lt. Surge from pedestrian Trainers like ourselves. This area will surely ring a bell for those who have ventured through Kanto. Check out this forensic-level photography for reference: 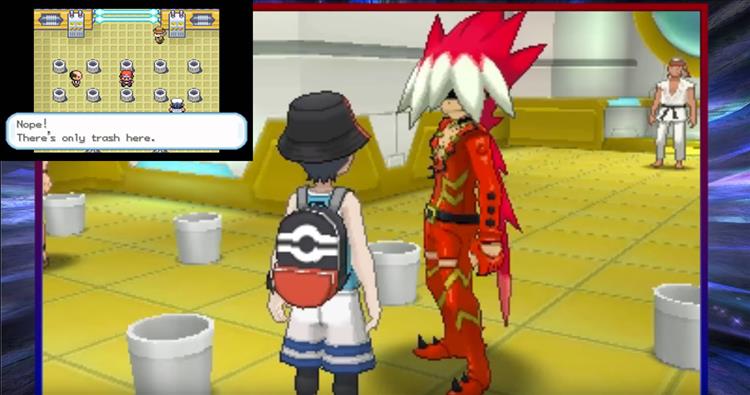 Of course, this could also just be a new area within Alola that simply references Lt. Surge's shocking systems - but it's worth noting that Kanto is heavily referenced at the end of Pokémon Sun / Moon. This can either be a blip on the radar, or a huge clue as to how big of an update Pokémon Ultra Sun / Ultra Moon is. Will we be heading back to Kanto?!
Stay tuned, Trainers! More details for Pokémon Ultra Sun / Ultra Moon are sure to make themselves known soon. In the meantime, what are your thoughts on this set of updates?