This week's Nintendo Download still doesn't see anything Virtual Console related for the Nintendo Switch outside of another NeoGeo game (let me dream) or even the Wii U this week, but that doesn't mean that this week's offerings aren't big. To start off with we have Wonder Boy: The Dragon's Trap for the Switch. This is a remake of the 1989 Sega Master System game Wonder Boy III: The Dragon's Trap but with hand-drawn animations and re-orchestrated music. However, fans of the original will be hit with a wave of nostalgia as not only can you switch between the new and original graphics and audio seamlessly on the fly whenever you want, but you can also use the passwords from the 1989 original to pick up where you left off, and you can get passwords in this version as well. I recently did a review of the game and I'm regretting not knowing what a Master System was as a kid because I really enjoyed the game and now I want to find the original cartridge for it.

The other eShop offering this week is URBAN TRIAL FREESTYLE 2 (that's seriously how it's written in the press release) for the 3DS. The sequel to the original game released a while back comes with a track editor and online sharing so you can create a stunt-bike racing course and share it with your friends. There are also twice as many levels as before as well as new bikes and customization options to unlock. While I'll also be reviewing this game in the near future, you can check out a demo fro the game if you're not sure about picking it up yet. 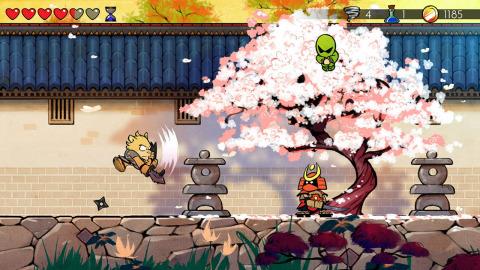