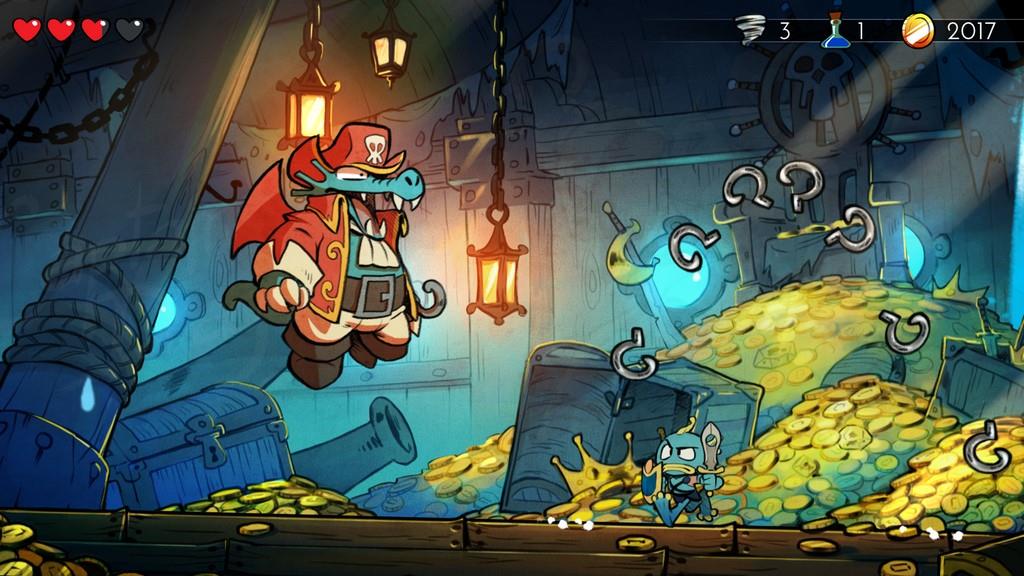 As someone who grew up with Nintendo systems, I had never even heard of the Sega Master System until sometime in high school.  I was familiar with the Genesis and the Sega Saturn, but had no knowledge of Sega’s 8-bit console.  That being said, I also had no experience with the Wonder Boy series of games until several years ago when I finally picked up a Master System and even then have only played one game in the series: Wonder Boy in Monster Land.  When I heard that LizardCube and DotEmu were planning a remake of Wonder Boy III: The Dragon’s Trap for modern systems, my interest was piqued.  With that said, let’s take a look at Wonder Boy: The Dragon’s Trap.

Wonder Boy: The Dragon’s Trap takes place where the previous game in the series, Wonder Boy in Monster Land, ends.  You go through a simplified version of the final stage from the previous game and fight the Mecha Dragon in his lair.  Upon defeating the Mecha Dragon however, Wonder Boy is cursed and transforms into Lizard-Man.  You then begin your adventure proper in Alsedo, a town in Monster Land.  The goal of the game is to defeat the Vampire Dragon and find the Salamander Cross which is the only way to remove your curse.  Also, this is where the game becomes non-linear to a point.

As you begin you can see that you have multiple options as to where to go, but will only have the ability to go to one area at first.  As you progress through each area you’ll defeat various enemies and open chests that usually contain money or keys, the latter needed to open a few doors you’ll come across.  At the end of these areas you’ll find a dragon boss you need to defeat.  Taking down the dragon will give you some gold to collect and a flame that at first you might think you need to avoid, but it actually continues the game by changing into another form.  This is the main gist of the game: transforming into new forms will allow you to progress to new areas. 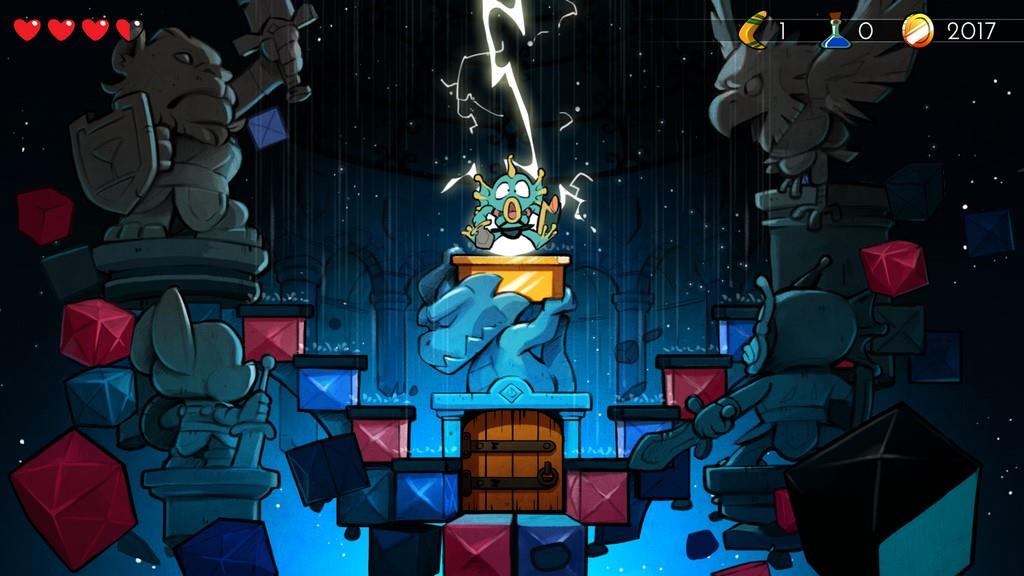 Honestly, the forms are fun to play with for the most part, but some are better than others.  While the mouse form has a sword and I’m particularly fond of swords as melee weapons, he’s rather small and doesn’t have much reach, so I’d rather use the Lizard-Man form since he has a bit of a range with his fireball.  Here’s the problem though.  Early on you can’t change your form once you gain a new one; you’re stuck in your current form until you obtain another one.  This is rectified partway into the game though before I knew this, I was a little disappointed when I had to trade in my ranged fireball for a small sword.  Once you get to where you can change forms to whatever you wish, you still can’t do it whenever you want as there’s a particular place you can do it and you can’t just change your form at any time, but it’s nice that you can at least change your form to whatever you wish.

You’ll notice that you start off with a single heart and, upon checking your inventory, not much in the way of attack or defense.  There are a lot of different power-ups you can find along your journey such as extra hearts, new weapons and armor, and special attacks.  The special attacks range from a fireball that travels in a wave pattern, a tornado that moves back and forth along the ground for a few moments, and arrows that fly straight upward.  You are limited on how many special attacks you have so it’s best to save them for when you really need them, such as these annoying clouds that drop fireballs on you and are usually out of range of your main weapon.  On that note, the weapons, armor, and shields you get will give you an attack or defense increase, but some may work better for certain transformations or situations.  Each armor or weapon will show you how much of an increase it’ll give whatever transformation you’re currently using and will list any extra abilities it may have, such as the ability to walk through lava unharmed. 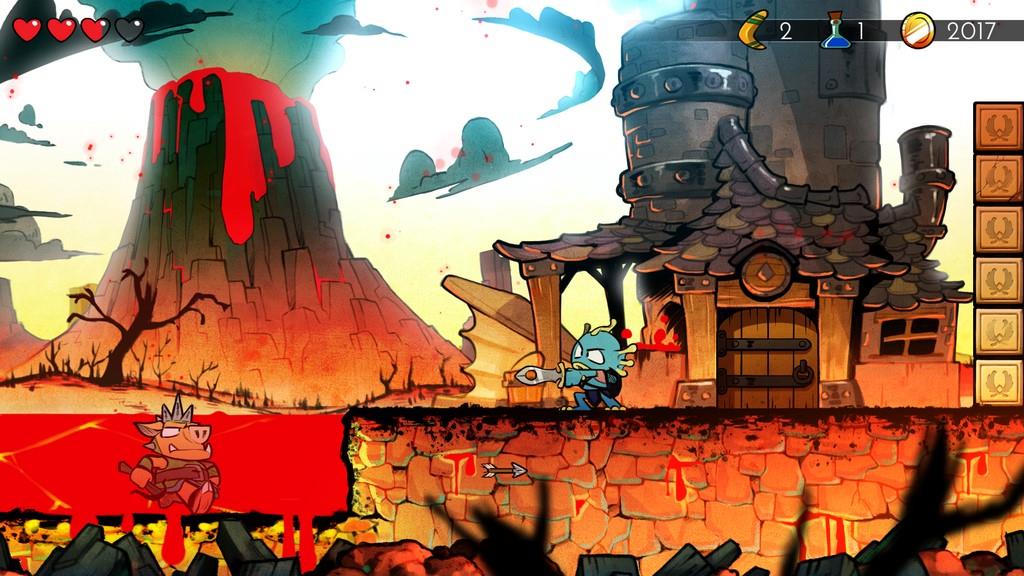 LizardCube and DotEmu added a bit of nostalgia in with this remake in two different ways, both of them rather big for players of the original Master System game.  First is the ability to seamlessly change the graphics and audio from the new style to the original Master System graphics and audio.  This lets you play the game as it was originally made back in 1989, but it gets better.  Do you still have your passwords from the original version?  You can actually use them here when you start up a new save file, but it gets better.  You can obtain passwords in this version and actually use them on the Master System version.  I don’t recall ever playing another remake that’s done this and it’s pretty awesome.

In terms of difficulty, it’s about what you would expect for a late 80s 8-bit game.  Early on it’s not too difficult as you get used to the controls and how the game plays.  You don’t have many options as to where to go so the enemies early on aren’t overly difficult to take out.  Later on though the difficulty starts to go up and if you’re not picking up every bit of gold you find and purchase everything you can from the shops to better arm yourself, you might end up dying quite a bit which does have a major drawback: you go back to the town you started from.  Granted you do keep everything you’ve picked up to that point so it’s not like you’re losing a lot of progress, but when some areas later on tend to go on for a while, it can be kind of frustrating when you get so far in, only to die and have to spend another ten minutes or so getting back to where you were. 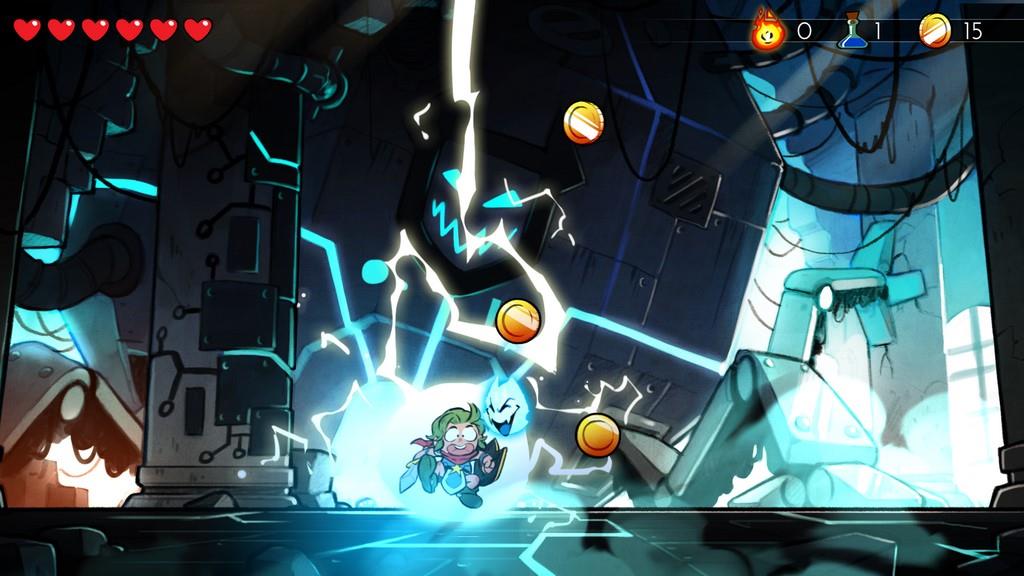 Beyond that though, Wonder Boy: The Dragon’s Trap is a fun and challenging game.  The transformations are fun to play with and each one feels different on top of being able to access different areas of the game.  I also really enjoyed switching back and forth between the new and retro graphics and did it quite a bit while playing.  While the difficulty can be a bit high at times, especially during the second half of the game, and dying does put you back at the town you started the bulk of your adventure in, you have options as to where to go if one direction proves to difficult, at least once you obtain a certain item that essentially lets you change your character in town.  If you were into the original game or the Wonder Boy series in general, you’ll likely enjoy this one.  Even if you’ve never played the series but want a decent challenge, Wonder Boy: The Dragon’s Trap will definitely give it to you without being too difficult.

Wonder Boy: The Dragon’s Trap is a fun and challenging game that I’m glad to see got a remake complete with optional retro assets.  For those who, like me, never had a Sega Master System back in the day, this is a great opportunity to check out the game as well as the series in general.  Plus if you have your old passwords from the SMS version and never finished the game, now’s your chance.