Blood and Wine is the second and final paid DLC for The Witcher 3. It's hard to believe that my adventures with Geralt are near their end given that I've lived with the game for over a year now. Sure the game had some issues when it launched but CD Projekt has gone above and beyond with their support for the game. It's hard to remember that that they released a metric ton of free DLC before the two paid expansion packs as well as a host of fixes and tweaks.

Blood and Wine follows the Hearts of Stone expansion pack which was released last year. Hearts of Stone set a high bar as it contained over 20 hours of new content for players to explore, making it a great value for the money.I'm only a few hours into Blood and Wine and so far it looks like this DLC pack is as good and possibly better than the first one.

The first thing you notice after installing the DLC is that all of the secondary screens where you manage inventory, stats, and quests has gotten a major overhaul. The inventory management screen retains the same tabbed design as before but the armor and weapons in your inventory now have their own sections. This makes it easier to see what enhancements you have for each type of equipment and frees up more space for the Geralt avatar which makes it easier to see what the items will look like when equipped. The other sub-menus have received similar updates and it adds another level of polish to the game. It's not exactly perfect but it is definitely a welcome change.

While the user interface changes are nice (and welcome) the real meat of the DLC is the content and so far the material is great. While out and about Geralt stumbles is summoned to meet a pair of nights from Toussaint. The duchess of Toussaint has requested Geralt's help to slay a monster that has recently started attacking her citizens. When Geralt arrives in Toussaint he find out there has been another murder for him to investigate.

This brings you to the CSI: Toussaint portion of the game where you'll investigate the murders and try to find out what kind of monster is taking out members of the local citizenry. As with all Witcher games the motivation behind the killings isn't as black and white as you thought and you dive deep to find out what is actually going on.

Early on you will get a side mission from an old friend that gives you a chance to unlock a new addition to the Witcher 3 mutation system. I haven't spent a lot of time with the system yet but it does look like a good way to expanding the existing system..

What has really impressed me with Blood and Wine is that Toussaint is a very vibrant and bright world compared to what we've seen in the main game. The world feels a bit more high fantasy with people who speak in colorful language and where everything is well maintained and clean. This is a huge departure with the low fantasy world we've seen in other games. It makes sense as this is a new world but it felt like a bit of culture shock.

Much like the first DLC you'll also face some tough battles early on in the game.  It too me some time to get back into fighting like a Witcher which resulted in seeing a lot more of the loading screen than I would like.  Death carries no real penalty other than having to face a long loading screen and in my case, the muffled chuckles of my wife.

I still have a ways to go before I finish the DLC but so far I have loved my time with Blood and Wine and if you are a fan of the series this is something you probably want to pick up. Expect a full review in the next week or two. 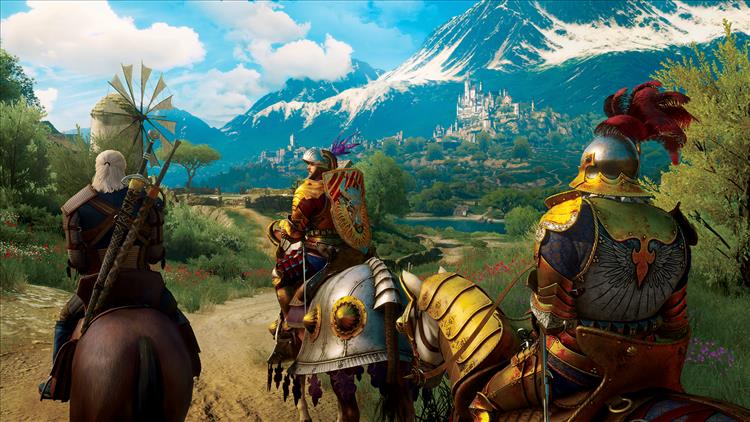