What We're Playing: Hardline of the Old Republic Edition

Russell Archey, staff writer, @NeoScyther
This weekend will see me wrapping up two projects. The first is a review of Broadside. It's not terrible, but there's a lot that just feels like it's lacking in certain aspects. The review is started, I'm just trying to figure out where to go with it. The other project is my Pokemon Blue Nuzlocke Challenge over on YouTube. For those keeping up, I've recently completed the final gym and am about to hit up Victory Road. I kind of had a plan to make the Elite 4 and final rival battle a lot easier, but then I noticed it might backfire a bit on me as I don't quite have the items needed to pull it off flawlessly. Still, for my first attempt at a Nuzlocke Challenge, it's going a lot better than I thought it would.

Sean Cahill, staff writer, @GN_Punk
The only game I'm playing this week is How Many Mojitos Can I Imbibe Before My Liver Implodes.

Sean Colleli, staff writer, @scolleli
With Moon Chronicles having released the rest of its episodes on Thursday, I'm tempted to jump right into that. Ideally, though, I should hold off until the New 3DS XL comes out on the 13th and play with the new C-stick for a true dual-analog FPS experience. Other than that, I picked up Jedi Knight and its expansion, Mysteries of the Sith, in wave 2 of the GOG.com Star Wars sale, which has made me a very happy, nostalgic nerd. To get Jedi Knight running on Windows 7 or 8 used to be a real chore, but the GOG version works like a charm. I don't know how the wizards at GOG pulled it off, but I thank the Force that they did.

Jeremy Duff, senior staff writer, @Duff3c
This weekend is shaping up to be an indie-PC weekend for me as I wrap up reviews for both Castle in the Darkness and Overture. Of course, my addiction will need feeding and I will have to make a few runs through some missions in Hyrule Warriors in search of more materials and weapons to level up my growing cast of characters.

Travis Huinker, staff writer, @travishuinker
This weekend I'll be playing more of the Battlefield Hardline beta, in particular the new hotwire mode as it's insanely addictive. I also have some early access titles that I'll be working on previews for, including Distant Star: Revenant Fleet and The Repopulation. Lastly, I discovered DayZ was recently updated via watching some Twitch streams and now want to check out the new content myself.

Charles Husemann, editor-in-chief, @chusemann
This weekend I'll be dying a lot in Darkest Dungeon. The game still has a lot of rough edges, but the art style of the game, coupled with a fantastic story and tone, are making this an early contender for sleeper hit of the year. This is coming from someone who is not a huge roguelike fan. I'm also going to be spending some time with the Battlefield Hardline beta and hoping the game immerses the player in enough of a fiction so that I don't have Ferguson flashbacks. I also started my first playthrough of Far Cry 4, but I'm not sure I'm going to be getting to it, given everything else that's going on.

Randy Kalista, staff writer, @RandyKalista
Thank you, Humble Bundle, for Knights of the Old Republic. I've never been to this part of BioWare town before. I guess in 2003 I was too busy playing SimCity 4, GTA: Vice City, and Enter the Matrix. Shut up—you played it, too. But hey, I'm here now, and since I've been bingeing on Dr. Muzyka and Dr. Zeschuk's life work, there’s no reason not to add KOTOR to the shelf.

Rob Larkin, staff writer, @Rob_GN
I lost a bet with the little lady and won't have any gaming this Saturday, so, no time to dive into anything new this weekend. On the corners I'll be getting in a few games of FIFA 15 and some Killzone Shadow Fall multiplayer. I'll also be playing BlackGuards 2 for an upcoming review.

Matt Mirkovich, staff writer, @Stillmywords
I'm tackling some of the harder puzzles that are unlocked after you finish the main campaign of Nihilumbra. Then there are runs of World of Darkness in Final Fantasy XIV to slog through while people learn how to deal with the first boss. I'm also playing some Resident Evil on PS4 in anticipation of Resident Evil Revelations 2 coming later this month.

Michael Passalacqua, staff writer, mpassalacqua@gamingnexus.com
I’ll be spending my weekend with Knights of the Old Republic, courtesy of Humble Bundle (seriously, such a great thing). I’ve already played a little bit and am loving it so far. I recently got done playing Dragon Age: Inquisition and can already sense some subtle similarities between the two games, even though one is 11 years older.

John Yan, senior hardware editor, @TheJohnYan
I'm not playing anything for at least a week or so.  I’ve got too much on my work plate with selling my software to another country and two other clients needing help. 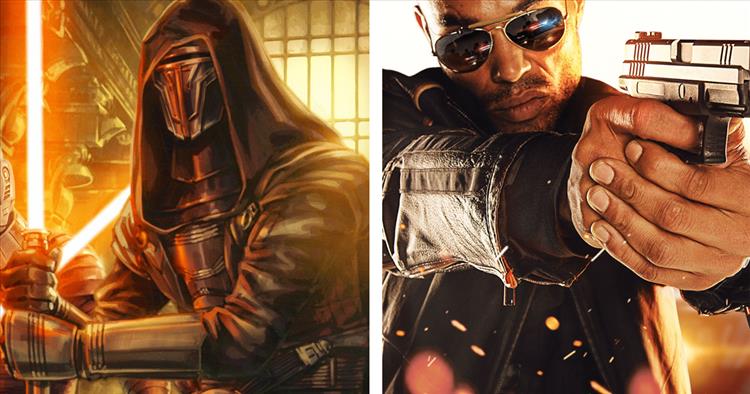