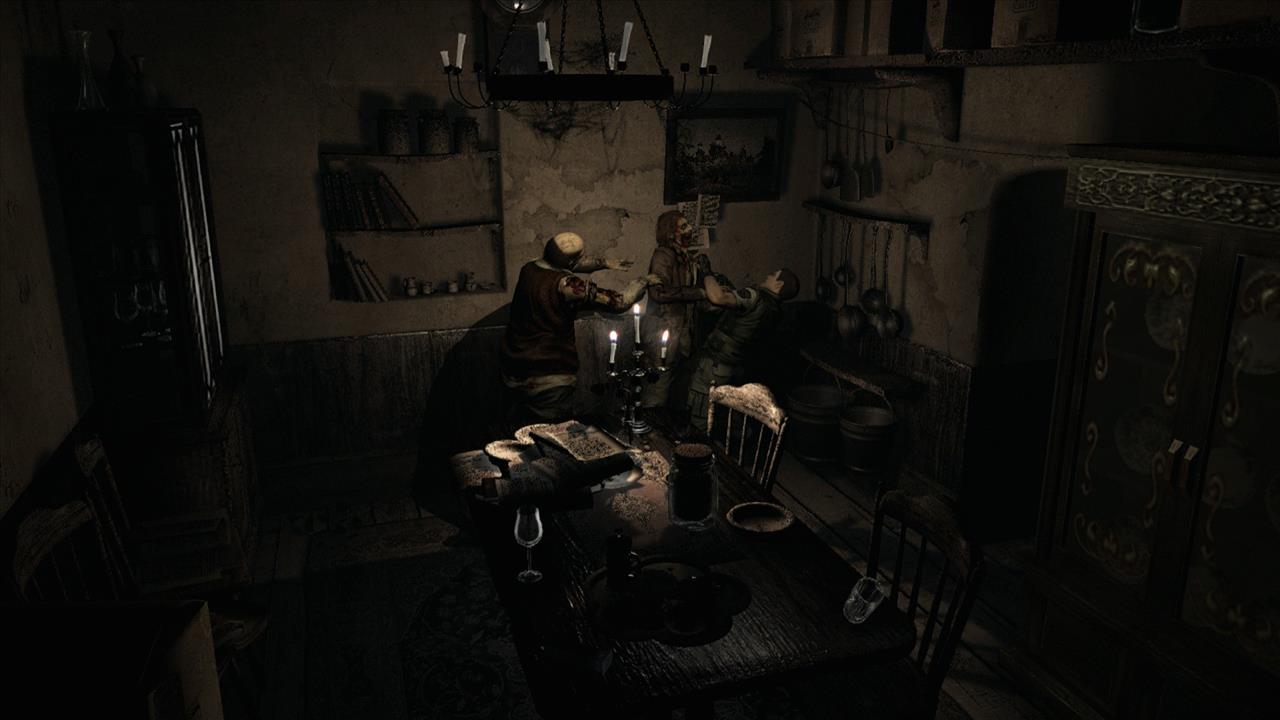 In our lifetimes we will undoubtedly play hundreds, if not thousands of video games. Most will be forgotten and simply fade away from our memories while a select few will forever hold special places in our (gaming) lives. The original Resident Evil (RE) is undoubtedly one of those games that left a lasting impact on players when it debuted back in 1996 on the original PlayStation. It was the birth of the modern survival horror style game and to this day, nearly 20 years later, it is still the best. After Capcom updated the game for release on Nintendo’s Gamecube, I didn’t think that it would ever get any better. I was wrong.

At its core, RE is the exact same game that it was all those years ago, it just happens to look and play A LOT better now. This includes all of the good and the bad. On the good side, the title still manages to create an unmatched ambiance that keeps you on the edge of your seat from beginning to end. The focus is on making you think under intense situations, be it the ever looming undead pounding at the door behind you or the clock ticking away before a spike-laden statue impales you in a dead-end hallway. This is when the series was good, and I mean really, REALLY good; it is a lot different game than the recent entries in the series.

Things move rather slowly and the gunplay leaves a lot to be desired, which may turn a lot of new players off; especially if they are expecting the action-fest that the series has become known as. Hopefully they’ll realize that it isn’t the focus in this experience and that the game is far deeper and more enjoyable than the modern iteration(s). The puzzle and the mystique of the mansion is what should be holding your focus and interest. Surviving should be your only concern. Ammo is scarce and your inventory space is incredibly limited. Your actions need to be thought out and executed with care. There aren’t a lot of room for mistakes and making one can often mean going back to an earlier save and having to retrace your steps.

For this updated version, the visuals have been given a massive update, running at a full 1080P. It isn’t nearly the jump that we saw from the PSX to the Gamecube, but there is a marginal improvement noticeable thanks to the new resolution. Don’t get me wrong, the Gamecube iteration looked amazing, and still does to this day, but the new version looks absolutely fantastic. Some of the models may leave a little to be desired, but all in all it looks incredible.

This new visual appeal goes a long way in drawing you into the game as the mansion is as interesting as ever. The lighting and reflections, in particular, really make the experience second to none. There is nothing like seeing that glimpse of doom in the reflection of a mirror or window and realizing that you are done for. I found myself getting sidetracked by just wondering around the mansion, even though I have been through it numerous times before. It is very easy to get lost in all of the meticulous details such as the painting and art in each room; it all just sucks you in like never before. 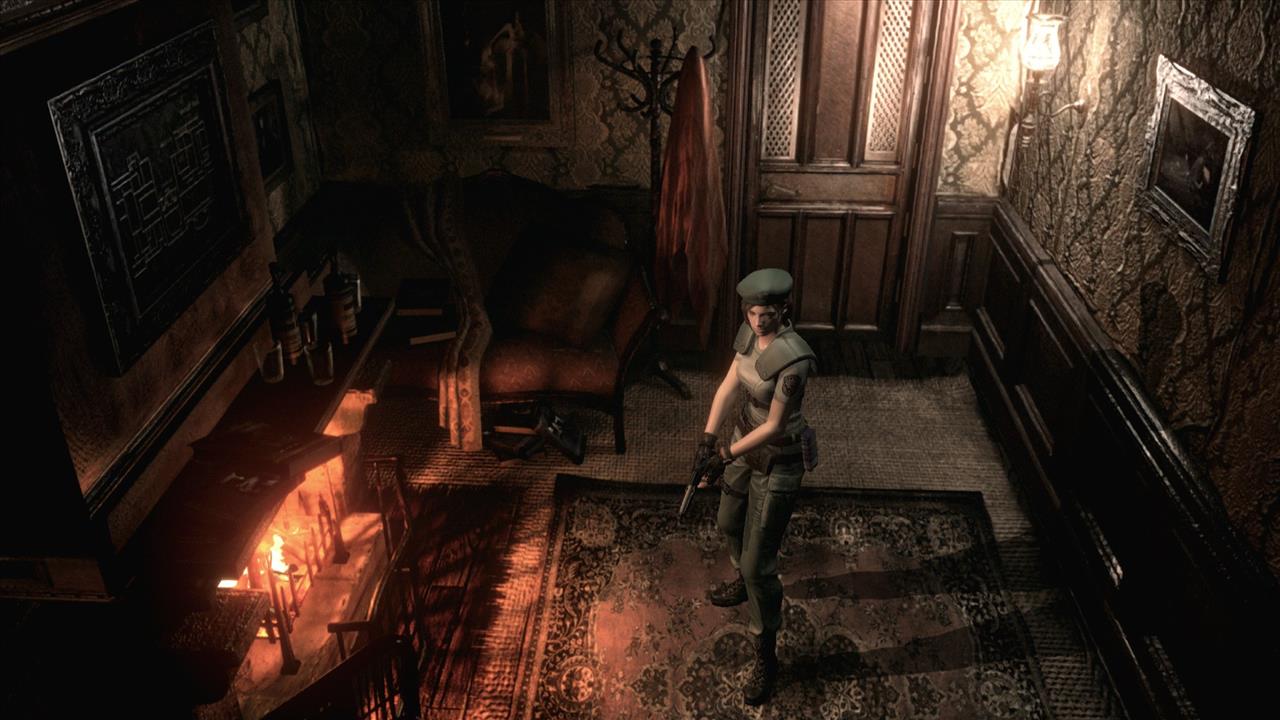 Capcom has left a lot of the visual and gameplay cliches from the game in tact which strengthens the experience in terms of its authenticity but revives some of the problems that haunted the game. You will still encounter the awkward “door” loading screens when moving from room to room and the old-school typewriter-save system. The door screens are sort of funny the first hour or so, but become more obnoxious than ever after that. Surely that much loading isn’t necessary in this installment. In terms of the save system, new players are going to be very upset when they realize that there is no such thing as auto-saving in this world. If you don’t pace your saves and manage your ink-ribbon inventory, it is very easy to put yourself in a very difficult spot progress-wise.

In addition the visual improvement(s), the development team has finally addressed the antiquated control scheme that the original game used. While the tank controls are still an option for those seeking a “pure” RE experience, there is also an updated option that makes the game feel a bit more like the modern titles. The updated control scheme really does wonders in making the game more accessible to new players, but at the same time it can often cause issues with the flow of the game. 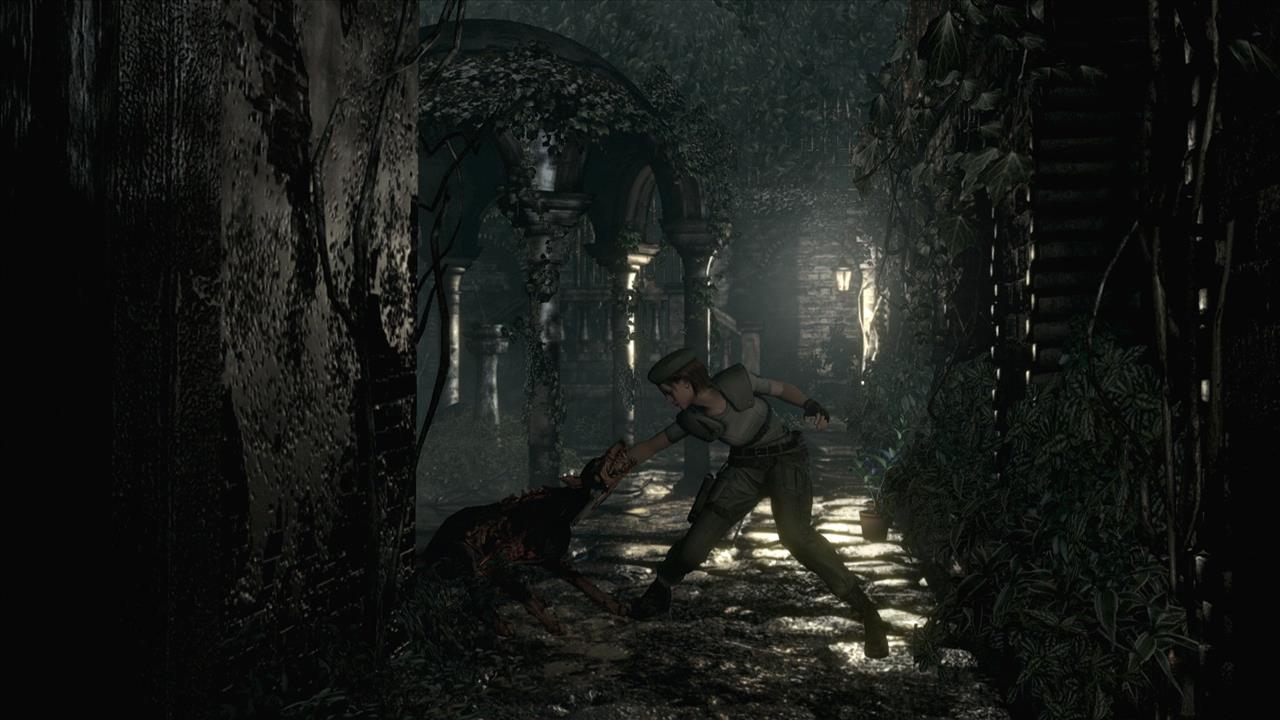 With the old controls, pressing up meant that your character would move forward, regardless of which direction you were facing (hence the label of “tank controls”). Now, the control stick moves the character in reference to the camera’s position, much like modern 3D platformers and action games. The problem is that RE doesn’t have a set camera throughout the game, it is always changing. The game utilizes a bunch of different camera angles to achieve the distinct feel; this means that you aren’t always looking at the game from a position behind your character. This takes quite a bit of getting used to because there is a constant need to re-orientate yourself with each new room. This is a particularly nagging problem when you are being chased, as it is easy to turn yourself around and head back towards danger if you continue to hold the same direction when changing rooms or scenes.

There is no doubt in my mind that this is the ultimate version of the original RE. Unless they completely rebuild the game from the ground up, which I feel would be a disservice, it will never be better than it is now. There are some technical issues and gripes to be had, such as clipping and awkward loading times, but those are things that have always been a part of the experience; it doesn’t really surprise me that they still exist in this version. The total package however, remains one of the most memorable and enjoyable gaming experiences that I have experienced in the past three decades. RE is and will always be a classic, and hopefully someday we will see the franchise go back to these incredibly strong roots. Everyone should pick this one up and see exactly what a survival horror game is supposed to be like.

An absolutely gorgeous update to a timeless classic, Resident Evil is every bit as thrilling and enjoyable now as it was when it was originally released in 1996. The controls still feel rough at times, even with the updated options, but the atmosphere and experience is second to none when it comes to the survival horror genre.