by: Jeremy - posted: 10/19/2010 2:02:00 PM
More On: Call of Duty: Black Ops Headbanger Headset
Call of Duty: Black Ops hits in only a couple of weeks; this time around, Nintendo Wii owners won’t be left out and Treyarch / Activision will be releasing the title for that system as well... with full online multiplayer. What fun is multiplayer without the ability to chat with the competition? None... and PDP wants to make sure that Wii gamer’s aren’t left out. The head set was originally revealed earlier this year for the Wii in general; now it has a more direct marketing approach

PDP has revealed the Call of Duty: Black Ops Headbanger Headset, officially licensed by both Nintendo and Activision. This updated version of the previously shown headset sports a slick black color, matching other Black Ops branded peripherals. The USB headset / microphone combination will give WIi-gamers the first chat options ever on the console outside of Nintendo’s official Wii-spoeak peripheral. The wired headset, which retails for $24.99, is being released in stores towards the end of October.

According to Chad's previous posting on the announcement of PDP's headset, before the Black Ops branding, it was also stated that the headset would also be supported by the upcoming Conduit 2. You can read the full press release detailing the Headbanger Headset after the jump. 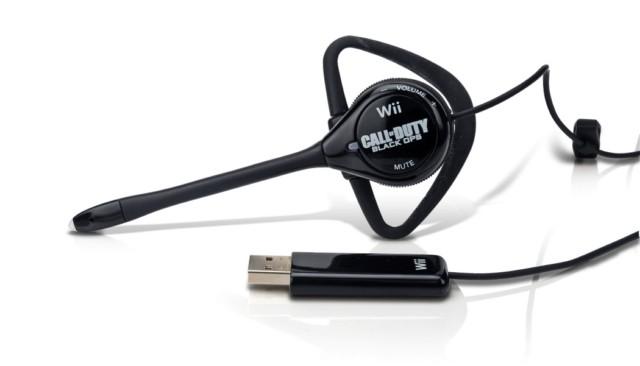 LOS ANGELES, Oct. 11, 2010 – Performance Designed Products LLC (“PDP”), a worldwide leader in the videogame accessory market, will be adding to its line of peripherals with an exclusive limited edition Call of Duty®: Black Ops Headbanger® Chat Headset for Wii™. Officially licensed by both Activision and Nintendo, the Headbanger Headset brings multiplayer online chat to the Wii version of the year’s most anticipated title. This limited edition black headset will hit stores in October, prior to Call of Duty: Black Ops’ worldwide launch on November 9th, along with the standard white Headbanger® Chat Headset for Wii™, each with a suggested retail price of $24.99.

“The Headbanger Headset is the first and only headset to bring online multiplayer chat to the Wii, and what better game to introduce it to the world than Call of Duty: Black Ops?” said Tom Roberts, Senior Executive VP & CTO from PDP. “Serious Call of Duty players require voice chat for team-based online games and we’re making sure that they can be heard loud and clear.”

The exclusive limited edition Call of Duty: Black Ops Headbanger® Headset allows gamers to experience epic Call of Duty multiplayer the way it’s meant to be, with full voice communication for the first time in franchise history on the Wii, and features a noise-cancelling microphone for crystal-clear voice input, high-quality sound via its oversized speaker, an extra large mute button and volume control dial and a 10-foot cord.

PDP’s Headbanger® Headset for Wii™ is anticipated to be at retailers across North America and Europe in October 2010.

About Patriarch
Patriarch is a vertically-integrated private equity firm with robust in-house operational turn-around expertise. Founded in 2000, Patriarch was built upon a patented financial model designed to manage and monetize the distressed portfolios of financial institutions. Patriarch has since evolved into a global investment firm that concentrates on direct investments in and the transformation of complex businesses, building integrated industry platforms. Patriarch manages funds with over $7 billion of equity and secured loan assets, with equity investments in more than 70 companies and controlling interests in approximately two-thirds of these. For more information, please visit www.patriarchpartners.com.