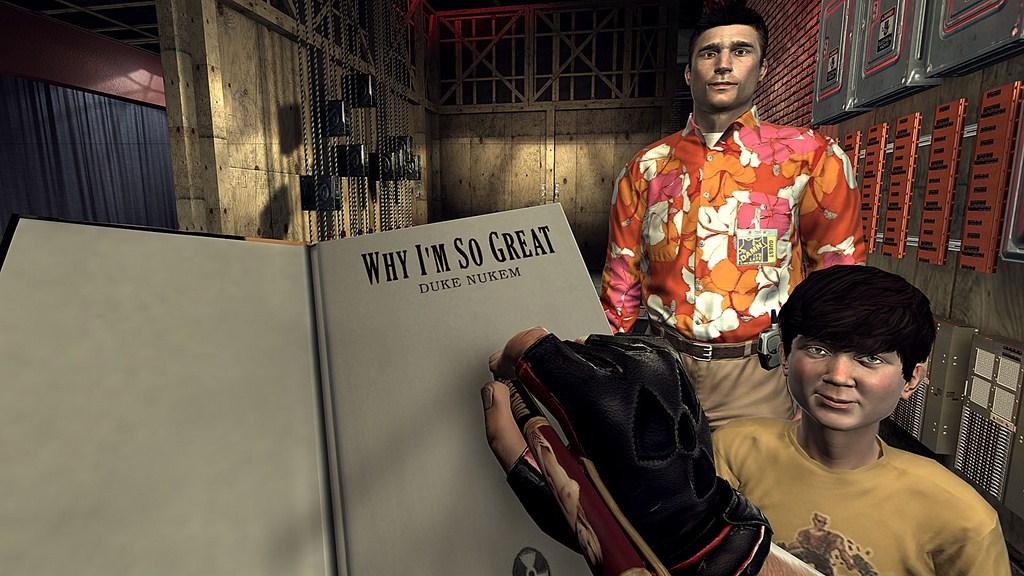 Written by Tina Amini on 2/10/2011 for 360   PC   PS3
More On: Duke Nukem Forever
Spending roughly 90 minutes playing a game that many gamers have been waiting for over a decade to play is a bit of a surreal experience. Even with a May 3rd release date already announced, and a short demonstration that was available at PAX in Seattle fairly recently, many are still unconvinced that Duke Nukem Forever is indeed finally on its way out to the public.

Our Duke Nukem Forever experience in Las Vegas starts off at the very beginning of the game. PAX-goers will remember the opening scenes where Duke plays Duke Nukem 3D as a pair of twins (known as the Holsom twins) are seen fairly blatantly pleasuring him. Just 10 minutes in and Duke is showing off his unabashed character that we can all identify as synonymous with the Duke Nukem name.

The action components of Duke Nukem Forever start off slow. This part of the game is mainly about representing how idolized Duke has become, as well as showing off some of the more playful aspects of the game as an indicator of more to come. Poop-smearing and white-board drawing are just several of the items you can interact with in Duke Nukem Forever, amongst many of which have the dual purpose of not just entertaining you, but also to boost Duke’s Ego which functions as his health. Oftentimes the game becomes more about finding out what interesting items you can play around with, and what that interaction could potentially result in. 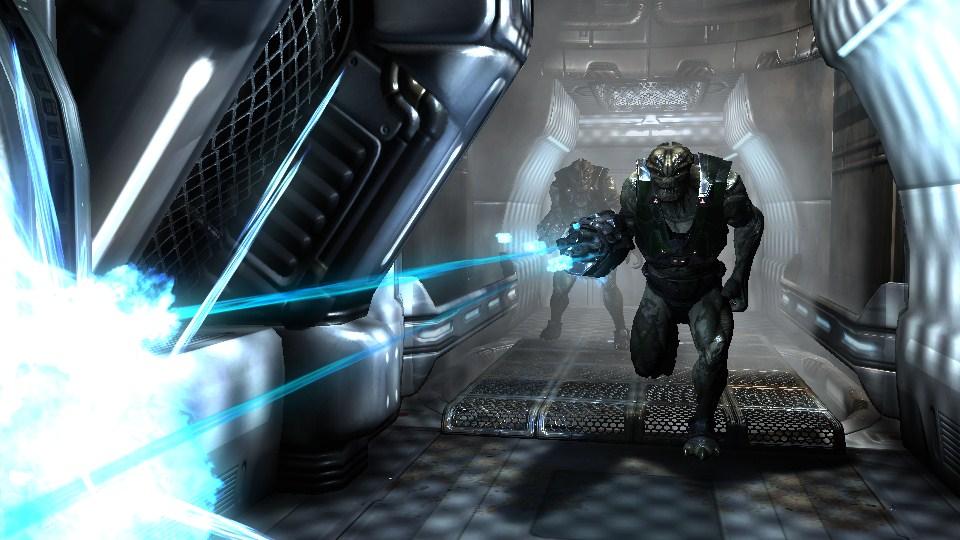 After we’ve sufficiently gotten the idea that Duke Nukem is indeed a bad ass - what with his portraits hung all over his very own casino, fans bursting at doors attempting to get a look at Duke as he passes and AI characters swooning as you enter the room - Duke will finally come face to face with the re-emerging alien threat. Nothing comes between Duke and his women, and the action will quickly pick up pace from here on out.

With aliens infiltrating his territory, I direct Duke to pick up trash cans to use as inventive weaponry against the better-equipped alien enemies. Duke makes his way through the ventilation shaft, and makes use of his Duke Vision when the power goes out so that he can see in the dark. His final confrontation with the onslaught of invading aliens in this level has Duke battling against the enemy ship from the seat of a turret. As ships come in to drop off jet-pack-clad aliens, and other ships fly overhead to shoot laser beams at Duke, Duke must fight them off while simultaneously attacking the mothership.

As the levels continue from here, Duke confronts progressively aggressive enemies as they charge at him or teleport to more opportune points of combat (namely, behind him for a surprise attack). Even playing on medium difficulty, it can occasionally feel overwhelming when a monster’s attack only takes two hits to get you to the red-screened game over.The combination of their strength as well as their numbers makes for a challenge that practically demands you kill the enemy well before they can reach you.

Part of the 90 minutes played has Duke driving in a remote-controlled car after being shrunk down to miniature size. Duke can still attack his enemies if he chooses to jump off the vehicle, but running into their toes and watching them hop up and down in pain is much more entertaining. Boosting across ramps made by paintings and posters, Duke avoids death at all corners. Eventually, Duke will even come across a puzzle to solve in-game that he needs to complete to move on in the level. It didn’t help that I accidentally hit down on the directional pad and chugged a beer pre-puzzle solving, but it did make it that much more impressive after I solved it bleary-eyed and all.

The overall impression 2K was insisting on promoting was that the game is “fun.” Of course, gamers would expect a video game they are in the market for to be fun. Duke Nukem Forever, however, entails an entirely different kind of fun. The fun that 2K is referencing is that of a game that does not hide its nature. At its core, Duke Nukem Forever is relatively juvenile. There are no notions of deeper contributions to the player’s experience save for sources of entertainment that involve comedy and a base enjoyment of violence. 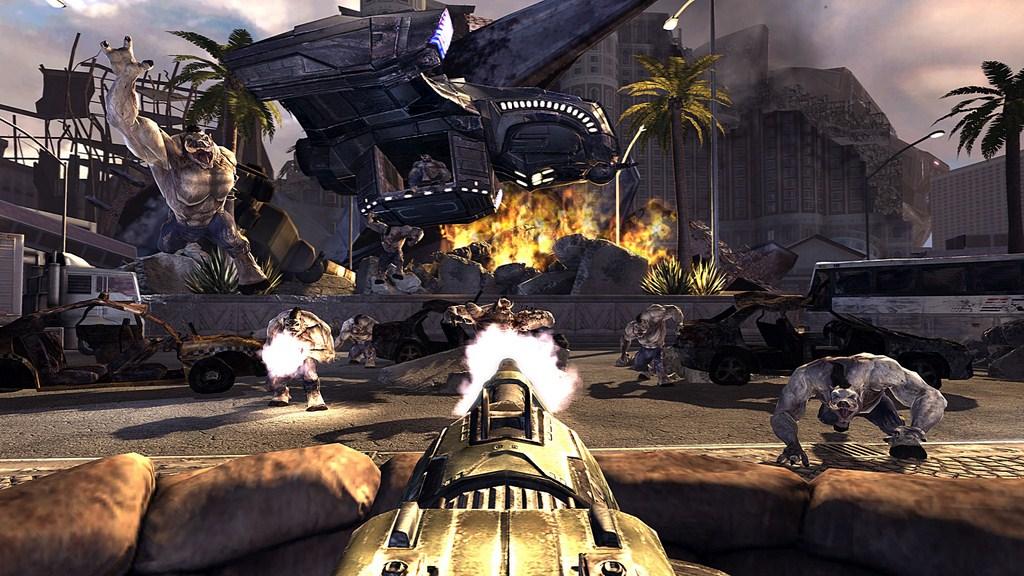 Ultimately, the game is a result of its history in development. Coverage on Duke Nukem Forever grew to become quite investigative. It’s no question that the game’s potential release received particularly intrusive attention. In effect, the game has become predominantly about Duke. He is constantly being acclaimed as a hero, and females pour over him in desperation going so far as to quiver at even the thought of disappointing him. Fans have pondered over Duke Nukem for so long that it seems like the developers took the opportunity to monopolize on that intrigue.

Allowing the game’s focus to be centered on Duke will not be an issue for many fans. Hearing his one-liners voiced by the famous Jon St. John as Duke kills alien after alien with memorable weapons from the franchise will be enough to sell the game for some. For others, however, the impression might come off as a vapid first person shooter whose development did not stand the test of time. Growing anticipation for Duke Nukem Forever over its many years of development hell - after multiple engine changes, layoffs, lawsuits, and the transition from 3D Realms to current developers at Gearbox - might ultimately see expectations unmet. You could even very well accuse the current game of being dated from a graphical standpoint - something that would have been more impressive during the franchise’s heyday. Somewhere between 1997 and the present day, Duke Nukem Forever has transitioned into a tribute title, glamorizing not just Duke Nukem himself, but the preceding games he was a part of.