by: Tina - posted: 11/2/2010 1:41:00 PM
More On: Duke Nukem Forever
After over a decade of waiting (somewhat) patiently for its release, it seemed Duke Nukem Forever was doomed to lay in development hell. Fortunately, however, at an incredibly populated section of PAX Prime this year, 2K Games and Gearbox Software showed fans that Duke Nukem Forever will finally be coming out. For real this time.

If you weren’t able to attend PAX, as yours truly is sad to admit, then my recent tour with the game in my home city of NYC might provide some insight into the game.

The demonstration begins with the very first level of the game. You start the level by relieving yourself in one of the urinals. If you stick around in the bathroom, you’ll find a “turd” in one of the stalls. Should you command Duke to pick it up, he will respond with a slew of self-loathing comments that can only be interpreted as directed towards you, the player. Tossing it around as you please while making a mess, Duke continues in his string of hilarious commentary calling the act sickening amongst other terms.

Finally moving forward from the restroom, you see some squad mates preparing to initiate an attack on the invading aliens beside a whiteboard outlining their plans. Yet another small piece of joy, you can draw whatever your heart desires directly on the whiteboard with a selection of colored markers. It is these small intricacies in the game that are delightfully fun and a quick break from the otherwise incessant violence (which will see no complaints from me).

After picking up an alien Devastator, Duke proceeds to confront a cyclops boss from the Duke Nukem 3D era. In fact, the entire level will be reminiscent of the final level of said previous iteration. When the over-sized cyclops is finally defeated, Duke puts the controller down to reveal that he has been playing Duke Nukem 3D in what can only be described as a scene indicative of the meta-reference. Gearbox throws in some humor about how after 12 years, the game better be worthwhile.

After fully appreciating the meta reference, Duke embarks on a road trip in level 15: Highway Battle. Running over aliens, he comes to a gorge that can be boosted past, but at the expense of your gasoline. Here, some of the weapons to be found in Duke Nukem Forever can be toyed with. Fans of the Duke franchise will be familiar with some of the weaponry, from the shrink ray to the pipe bombs that are detonated with a remote. There’s a good range for any playing style, from the sniper to the in-your-face shotgun.

Level 15 is also where both a beer can and Duke hologram can be found. The beer can, though dizzying your view from drunkenness, will make Duke’s melee fighting even tougher. The hologram functions as the perfect distraction, and it both moves and pretends to shoot at enemies.

The final stand Duke takes against his foes before the demonstration ends has him seated at a turret as a small wave of aliens attempt to attack him. Finally, an alien ship attacks from above, and leaves Duke on his back as he quite characteristically sticks his middle finger up at them before passing out.

The Duke Nukem character has definitely been retained: namely, the familiar brawny personality and attitude against alien scum, with a penchant for guns and women. Hilarious oddities like the “turd” and the whiteboard you can physically draw on not only add to your ego, but they are also fun distractions from the rest of the violence in the game. Most importantly, however, there is plenty of first person shooter action to be had, with the memorable armory from the franchise.

The game’s brute nature is endearing and brings the game down to a baser kind of fun. You won’t find particularly academy award winning script writing, but rather comments that are witty in a Duke kind of way. The character everyone knows, loves and misses will certainly (and finally) be making its return in Duke Nukem Forever.

Hit the jump for our interview with 2K about Duke Nukem Forever. 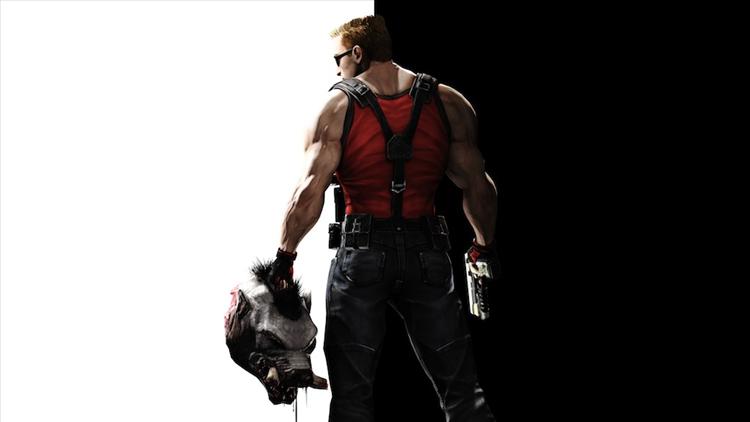 Any concerns with the ESRB?
Charlie: We are producing a game that is geared towards adults and it will most likely be getting an M rating but we support and fully adhere to the guidelines. We have a really good relationship with the ESRB.

What’s left to work on? Is it just polishing or are there still levels and other things to work on?
Melissa: We are definitely in the polishing phase. As you can see we’ve got some pretty solid levels even now. Now we are doing everything to make the game the best that it can be.

Did you have to rehash everything that was worked on originally?
Melissa: No, we really did get a solid foundation from 3D Realms. Part of the development is being done by Triptych and they’re actually a fairly large group of ex-3D Realms employees so they’ve just continued their work. There’s definitely a continuous vision for this.

Was it difficult to transition with the different engine changes?
Melissa: There was an engine change, and I can’t speak for anything that happened at 3D Realms, but the tech of where it was is the same as where it is now. Again, having those guys from Triptych smooths things over because they have an expertise in all the stuff that’s happening on the engine as well as the brand.

Charlie: Triptych’s involvement in the game helps retain the heart and soul of the project. For instance, Allen Blum created the Duke Nukem. He is what started Duke Nukem all the way through development until now with Gearbox to complete the project. The President and CEO of Gearbox, Randy Pitchford, actually got started in the game business working on Duke Nukem 3D. Now he’s gone full circle and owns the IP with Gearbox. His co-owner, Brian Martel, also worked on Duke Nukem 3D. Now he’s the Art Director at Gearbox. The soul forms the foundation as to what Duke Nukem Forever is.

And Jon St. John is still the voice actor for Duke Nukem.
Charlie: Yes. He has been really great. He even made an appearance for us at PAX. He’s a very valuable partner with Gearbox. He’s been involved in a lot of their projects; he did a lot of the voices in Half-Life: Opposing Force, for example.

Did you have to continue work with him for this title?
Melissa: Since we are in polishing there are still things we are finding where we say: “Hmm, actually if we had another line here it would work better.” So for things like that.

How do you think the fans who have lost the dream of the idea of the game coming out will be won back?
Melissa: We know that there have been a lot of disappointments. There’s also the sense that fans have been anticipating this for 13 years, and are asking if the game can live up to expectations. So what we’ve been trying to do is give them the opportunity wherever possible to get their hands on the game and see that it’s real, to rebuild the trust that this game will come out seriously this time.

Also, we allow them to get a sense that their expectations are going to be met. When you play the game, you have fun. It’s consistent across the board with everybody who touches it. We’re really excited for them to have that sense of discovery when they get a chance to play and give them the opportunities like at PAX to get a first look at the game. Also, our First Access Club that we did with our GOTY Borderlands edition is meant to reach out to them and give them opportunities and reward them for their patience and their support.

Special thanks to both Melissa Miller and Charlie Sinhaseni at 2K for inviting us out for the demonstration and answering our questions.