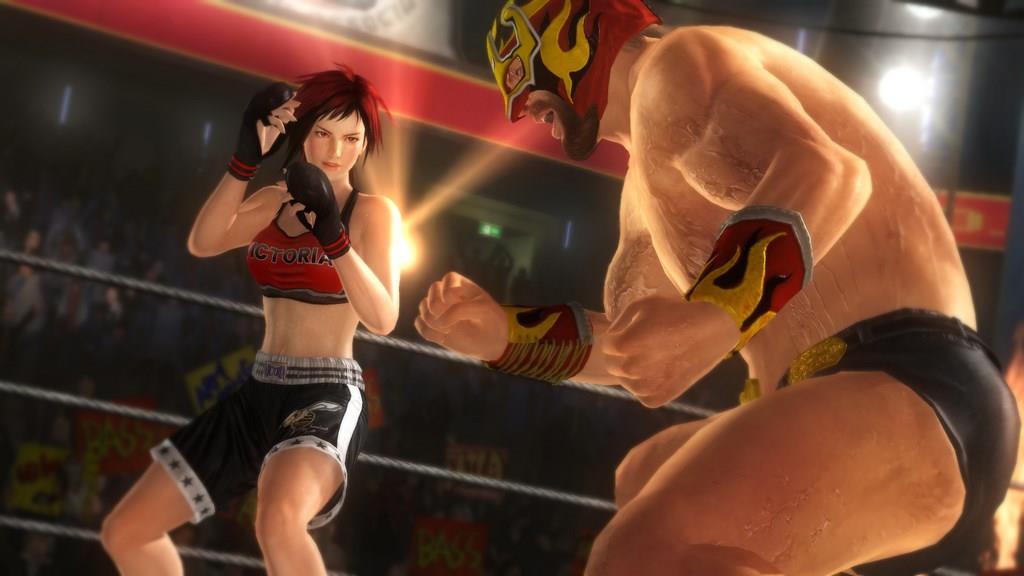 Written by Jeremy Duff on 5/8/2013 for Vita
More On: Dead or Alive 5+
The Dead or Alive (DOA) series has always held a soft place in my heart. Not only have I always preferred its fluid control system and combat over the likes of Tekken and Virtua Fighter, but it, for some strange reason, is one of those games that I can remember the exact first time that I ever played. My freshman year of college I discovered the arcade original tucked away in the corner of an arcade on the Ohio State campus; I was hooked from the start.

The control scheme of DOA was just so much simpler than the other games in the genre. You could punch, kick, counter, and throw; it was as straight forward and it looked great (animation-wise) even in it's first iteration. That is the one thing that I absolutely love and respect in the series. Here we are, nearly two decades later, and the game still feels the same. Not only does it feel the same, but it feels as good as any fighter on the market.

As Cyril discussed at length in his review of the console release, the crew at Team Ninja have really taken a minimalist approach to the latest sequel in the series. The core gameplay has barely been changed and there are only 2 new faces on the roster plus four special guests from Virtua Fighter. Long time fans will feel right at home both in terms of the familiar faces gracing the roster and the action that takes place on screen. That hasn’t changed a bit for the worse in the game’s move to Sony’s portable platform; in fact, I would even argue that it has gotten better.

First off, while the game does take a very slight graphical hit in the port, it still looks absolutely phenomenal. This may be the best looking game we have seen on the Vita yet (sorry Uncharted). The game just looks and runs great on the bright OLED screen. The textures don’t look quite as polished and there are some noticeable jagged edges apparent on the characters, but you won’t be thinking of those in the heat of battle.

The mode variety has received some tweaking on the Vita. There is still a nonsensical story mode that will introduce you to the characters and give you your first taste of the world. I won’t repeat what Cyril already stated, because I agree with him wholeheartedly: this story makes zero sense. Any and all entertainment taking from the mode will come purely from its visuals because its content (writing) leaves a lot to be desired. The tutorial features have been moved out of the story and into their own dedicated mode.

There are complete, detailed modes that will explain to players the ins and outs of every single aspect of the game: striking, countering, throwing, interacting with the environment, and even learning how to read the movements and frame information of your opponents. Not only are these modes present for the game as a whole, but there are also lengthy tutorials for each individual character, as well as combo challenges for them all. This will consume a lot of your time if you are like me and have that incessant need to complete them all. On top of adding replay to the game in that sense, they also make you a better player,which is what they should be doing more than anything else.

The mode truly does its job in making you a better player.If you can make it through the entire tutorial, meaning both the individual lessons and the “tests" that require you to show off your newly acquired skills in battle, you will be able to really hang with the competition online. That doesn’t mean that the game isn’t accessible to casual fans however; that is the joy of DOA’s gameplay. There is still fun to be had and amazing feats to be accomplished even if you haven’t mastered the ins and outs of the system. Casual players can get by just fine in their own ranks, but those who take the time to master the system will easily rise to the top.

While Team Ninja has taken the opportunity to implement a touch-control scheme into the game, it works surprisingly well. The game’s “touch fight" mode really feels a lot better than I expected. The variation input combinations have been assigned to different gestures with one- or two-finger touches on the screen. It is also worth noting that this mode also introduces a new perspective for the game as it moves fights into a first-person point of view. It’s an entertaining addition that really should have been given a little more. The only option to experience this in is under a skirmish-style mode where you simply select two characters and battle it out. You can’t use it in any other mode of the game: story, online, time attack, survival... nothing. This seems like a waste considering how well done it actually is; on the other hand, I am also glad that they didn’t shoe-horn it in as a required method of input like other games tend to do.

There is just a ton to see and do in the game and the fact that it can be done in short spurts and on the go only enhances the experience. In addition to tons of modes and leaderboards, there are a ton of costume unlocks and a highly competitive online community that bridges together both the PS3 and Vita platforms. The inclusion of cross-platform play (and saves for that matter) only strengthens the game and ensures that the support will live on as long as interest remains in the game, not just this particular port. It is worth noting that in addition to being compatible with the PS3 version for online play, players can also share their DLC purchases between the two versions; while cross-buy isn’t in place for the game itself, it is therefor the DLC.

There really isn’t much room for complaining when it comes to DOA5+. The game is incredible in every aspect with the exception of the story. Seriously, the storyline presented in the game seems like it was written by an elementary school class. It is nothing more than a “how can we squeeze this person in”cut-scene fest,albeit a very pretty one. Hell, they don’t even include all of the characters from the roster in the story! The joy is in the experience and the gameplay though, and in that sense the game truly delivers. The original DOA5 release was an awesome one. Now that Team Ninja has taken all of that and shrunken it down into a more convenient package, and then some, I can’t help but appreciate it even more. Fighting game fans will definitely want to add this one to their libraries!
Dead or Alive 5 Plus is another stellar fighting option for the Vita. This little handheld is quickly becoming the king of fighting games in my book! While the visuals have taken a slight hit in the transition to mobile, the options and performance more than live up to the console original. This may be the best version of the game you can get.