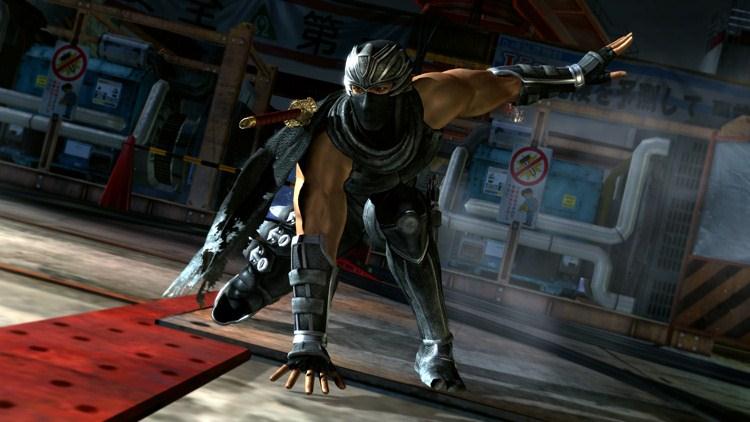 Written by Cyril Lachel on 10/11/2012 for 360
More On: Dead or Alive 5
With the skimpy clothing and annoying characters, I wouldn't blame you for wanting to dismiss the Dead or Alive franchise. This is a series that looks like it's specifically designed to appeal to teenage boys and nothing else. And yet, after five iterations, I'm constantly impressed with how much I enjoy the core fundamentals of Dead or Alive. Sure it's full of busty beauties brawling in skimpy clothing, but it's also one of the most accessible fighting games currently available on any platform. As goofy as it is, this is one series that shouldn't be dismissed.

This fourth sequel keeps things simple, refusing to radically change the core mechanics or add too many new characters. In fact, all of the characters you've grown to know and love return for another go at the DOA tournament. We get Bayman the soldier, Bass the motorcycle-riding pro wrestler, stoic Hayate, a very drunk Brad Wong and, of course, Ninja Gaiden's own Ryu Hayabusa. But wait, you can't forget the women that ultimately dominate this roster. We're given fan favorites like Kasumi, Helena, Tina, Christie, Ayane, Leifang and Hitomi, all with plenty of outfits to try on.

New to the roster are Mila (a spunky young MMA fighter) and Rig (a dark man who wears a hoodie). Sadly, neither of these characters are as colorful as Zack or Kasumi. Rig's bad temper left me cold and I could only handle so much of Mila's chirpiness. Also new to Dead or Alive are Akira Yuki, Sarah Bryant, and Pai Chan, all from Sega's Virtua Fighter series. This addition isn't as jarring as you might think and helps round out the game's familiar faces. 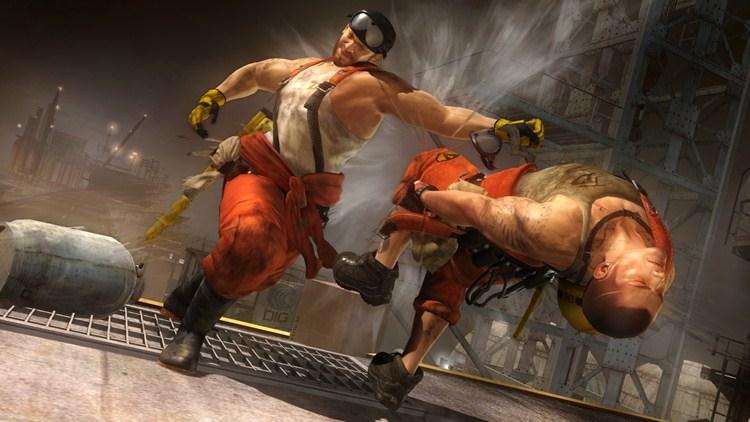 In crafting Dead or Alive 5, Tecmo decided to take a page from last year's wildly successful Mortal Kombat reboot and include a lengthy story mode. In short, the plot revolves around Helena trying to rebuild the shattered DOATEC by funding (surprise!) a brand new fighting tournament. Oh, and she might be building an army full of cloned super fighters to help her take over the world.

I imagine that at some point the game's plot was written out just like that. However, somewhere between creating the story and fitting it into the game, the script shattered into a million little pieces when it was accidentally dropped on the floor. Unfortunately, nobody at Tecmo could figure out how to put it back together, leaving us with a scatterbrained narrative that makes no sense. Dead or Alive 5 suffers from a severe case of ADHD.

We're fed pieces of the story a little at a time, cutting between characters and events in the most jarring way possible. Characters will seemingly teleport from country to country for no reason.  Early on, Ayane travels from the United States to China to Antarctica without a single word of explanation (or wardrobe change). Even when the game eventually wraps back around to show the same events from a different point of view, it doesn't explain how everybody is able to travel great distances without concerns about money. 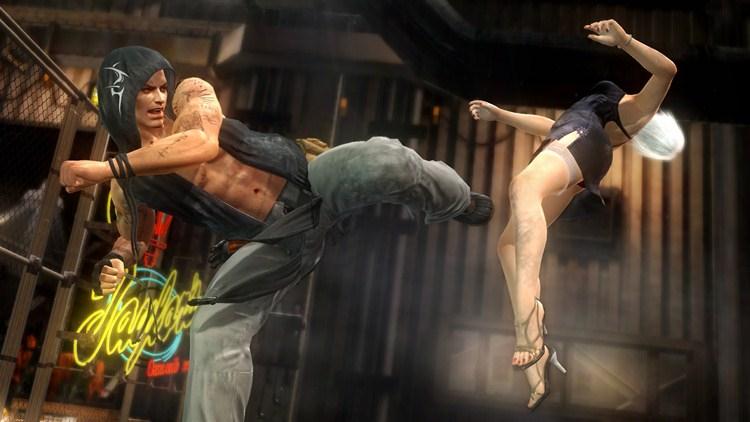 Also confusing is the tone of the story. At times it's deadly serious and full of personal drama. And yet, other times, it's so laughably goofy that I almost expect Porky Pig to jump out and do his best to say, "That's all, folks!" This is a soap opera full of good-looking people with devious plots. Unlike One Life to Live or General Hospital, here the characters don't have mad passionate sex. Instead they fight.

The reasons why characters fight is comical at best. Half the time it's for something so petty that it wouldn't even provoke an argument, let alone fisticuffs. Granted, a bit of that is to be expected in this kind of story, but it's hard to take any of Dead or Alive's story seriously until it's too late. The real tragedy is that the schizophrenic editing actually undermines what should have been an emotional ending. It all just left me scratching my head in utter bafflement.

On top of the convoluted story line, the single-player campaign acts as a training tool for teaching new players the basics. Each stage offers a bonus task for the player to complete. Here you'll learn about performing holds, pulling off charge attacks and throws. Eventually you'll be asked to juggle ten hit combos and use the background to inflict even more damage. Thankfully you won't have to complete these goals in order to progress through the story. 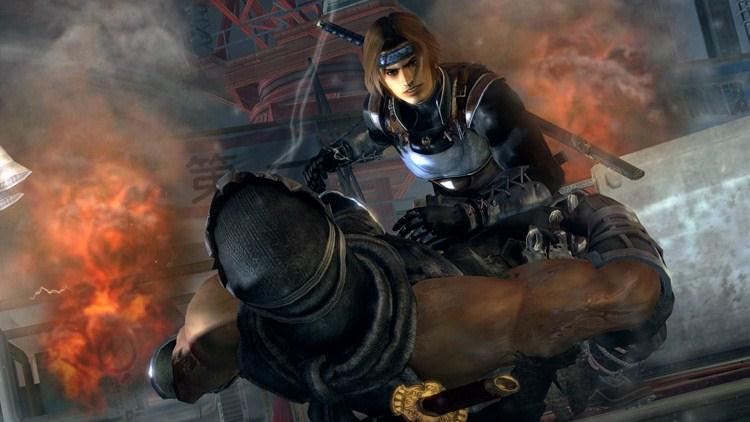 With only one punch and kick button, Dead or Alive is one of the most accessible fighting games on the market. It's easy to pull off really impressive moves by doing nothing more than button mashing. But don't think you can take the lazy way out, because any experienced player will be able to disarm the button masher in short order. The mechanics are deep, yet fluid and easy to control.

This time around, Tecmo has tweaked the reversal system. Here we're given a hold button, which is the first step to turning a series of devastating attacks around on your opponent. The idea is to judge what kind of attack is coming and then hit the hold button and the appropriate direction. This takes a little getting used to, but is easy once you know what you're looking for. However, it's not so easy that you can exploit it through the entire round. Finally the Dead or Alive reversal feels balanced.

What has always set Dead or Alive apart from the other fighting games is the way the various stages will change and expand. Most of the backgrounds are interactive in ways you might not even expect. You are often able to hit the enemy over railings and through walls. One stage has the floor under your feet twisting and turning as the background explodes around you. Even when you can't knock somebody through a window or down a set of stairs, there's a lot of detail in the background to keep things interesting. With so much to interact with, the average Dead or Alive fight is captivating ... even if you're not the person playing. 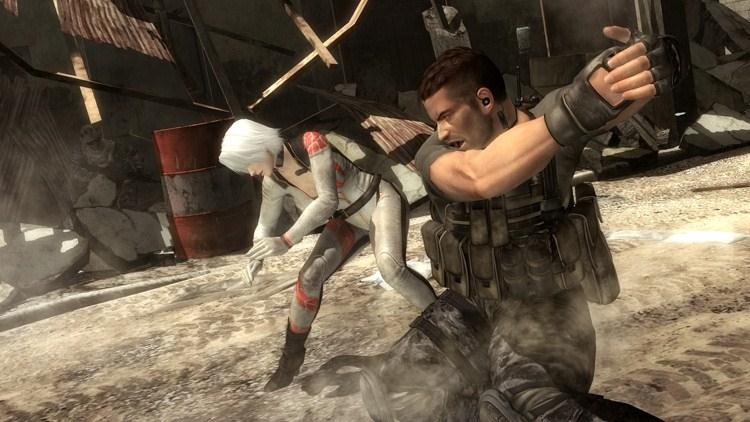 Beyond the lengthy story mode, solo players will have a chance to try their luck at any number of generic fighting game modes. Up first is the arcade mode, where you fight a few characters and the credits roll. There's also a time attack mode, which wants to know how quickly you can beat DOA5's story. Survival mode pits you up against a long line of bad guys, and the training mode is there to let test out lengthy combos and special moves.

Dead or Alive 5 also offers the standard selection of multiplayer modes. I found the online rounds were smooth and it was always easy to locate a challenger. Regardless of whether you're playing online or off, there's an option for both one-on-one and tag team matches. Throw in a solid collection of characters (each with an impressive amount of outfit choices) and you have one of the best fighting games of the year.

Dead or Alive 5 is also one of the best-looking fighting games of the year. The character models really shine, even if they're not going out of their way to be impressive. None of the outfits feel overdesigned, as is the case with so many recent fighters (I'm looking at you Konami). Tecmo keeps it simple, allowing for the incredible backgrounds and stunning animation to do the work. Just one caveat: Team Ninja continues to design certain body parts as if they were filled with helium. Even if it doesn't offend me, I still find it distracting.

While I wouldn't call Dead or Alive 5's story good, it is always entertaining (and baffling). Thankfully the rest of the game is even stronger, full of tight fighting mechanics that are easy to pick up and learn. It's also full of colorful backgrounds and memorable characters. In a year full of strong fighting games, Dead or Alive 5 should not be dismissed.

You might not know it from the box, but Dead or Alive 5 is one of the most baffling games of the year. It's full of weird editing, ninja clones and large breasted women. And that doesn't even begin to scratch the surface of what makes this game so incomprehensible. Thankfully the solid gameplay and gorgeous graphics make up for the often disjointed story telling!