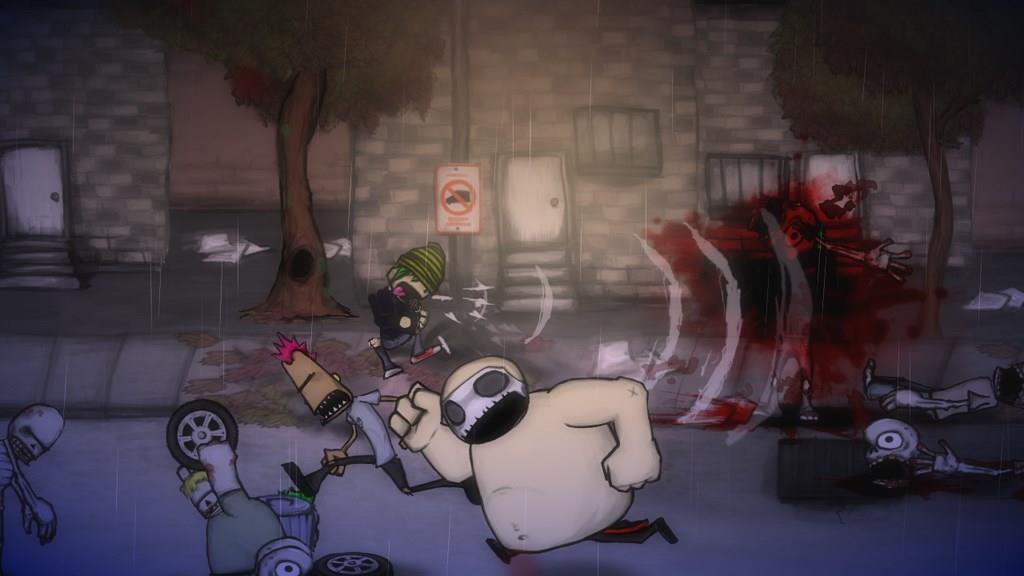 Written by Cyril Lachel on 8/15/2013 for 360
More On: Charlie Murder
Charlie Murder is the best game I have ever played about a group of resurrected punk rockers on a mission to stop the apocalypse. Unfortunately, as a side-scrolling 2D brawler, Ska Studios' newest game is merely pretty good.

Thanks to games like Dungeons & Dragons: Chronicles of Mystara, Dragon's Crown, Minotaur and the just-released Charlie Murder, I think we can officially call 2013 the year of the beat-em-up. After years in hibernation, the retro 2D brawler is suddenly all the rage. No matter if you're into high fantasy or rebellious music, this has been the best summer ever for fans of the niche genre.

Charlie Murder trades dungeons and dragons for tattoos and three chord melodies. You play one of five musicians, including Lester Deth on guitar, The Rexecutioner on drums, Tommy Homicide on bass, Kelly "Skelekitten" Skitten on back-up and Charlie Murder on vocals. Together they band together to fight off zombies, vampires, mutant spiders, mummies, cult leaders and a giant human/hamburger hybrid. It's going to be one of those days.

The game starts out with the band dying and going to hell. Thankfully an emergency worker was able to resuscitate everyone in the band, but not before the town gets ransacked by demons. Charlie Murder knows what needs to happen, and of course it involves the Battle of the Bands. This sends our punk rock heroes on an epic journey from one side of the city to the other.

The backstory is slowly uncovered as the band fights their way through the graveyard, a construction site, the mall, a mysterious castle and even a pirate ship. We learn about one of Charlie's friends, a fellow musician who watches those around him become rich and famous. He seethes with jealousy, and ultimately takes his revenge to a very unhealthy level.

Despite their simplicity, the cut-scenes prove to be surprisingly moving. It's easy to relate to the emotional story, regardless of which side you come down on. Instead of everything being black and white like in so many other games in this genre, the villain turns out to be sympathetic. That's not to excuse his actions, but you can understand where he's coming from for much of the game. We see Charlie Murder the band in the worst possible light, something that was truly refreshing. 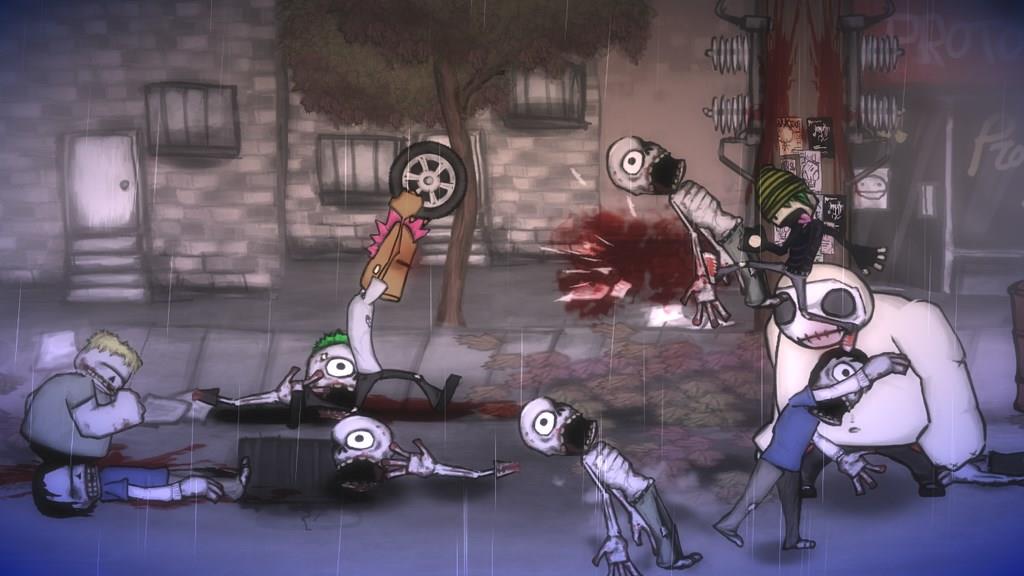 Strip away the punk rock clothing and you're left with a traditional 2D brawler. Much like Castle Crashers and many other recent beat-em-ups, Ska Studio has added much-needed role-playing game mechanics, such as leveling up characters and collecting rare loot.  These RPG elements help to mask the game's repetitive action, but it can only take you so far. Thankfully the rest of the game is so outlandishly crazy that you'll desperately want to know what happens next.

The developers did a good job of breaking up the action with a series of simplistic mini-games. Just when you're sick of fighting, the entire game will morph into a 2D horizontal shoot-em-up. There's also a Rock Band-inspired rhythm game, as well something that can best be described as an on-rails shooter. None of these modes are very deep, but they are a welcome respite from the non-stop punching and kicking.

The punk theme is admittedly fun. All of your armor and equipment comes in the form of T-shirts, funky hats and tattoos. You drink beer and coffee to regain health and add temporary perks. Even your so-called magic spells have the punk vibe. My character, Kelly Skitten, used deadly clothespins for protection. Players can also tag-team with their fellow band mates, leading to an all-out assault of guitars wailing and drums pounding the foes to death. 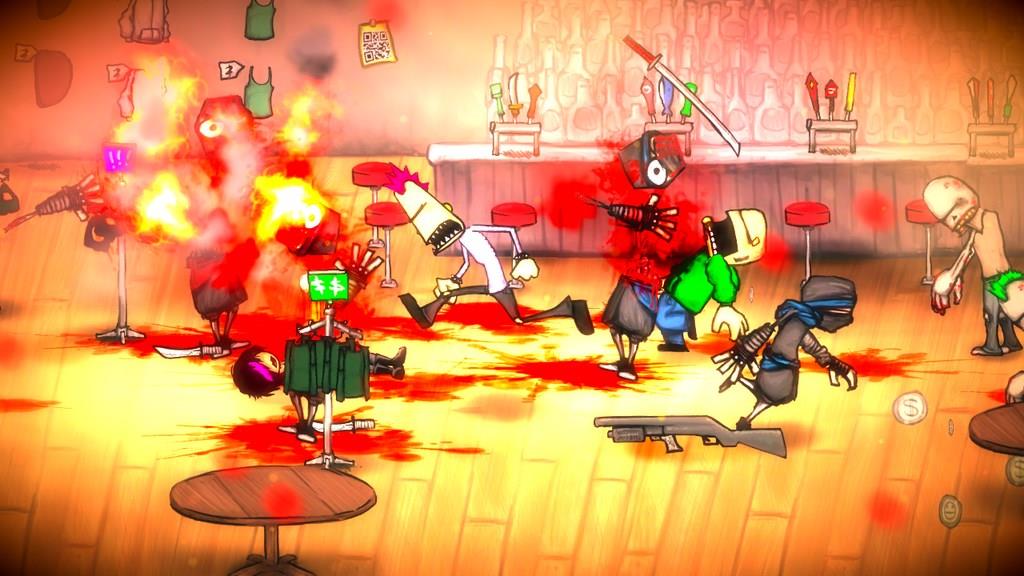 With such an emphasis on punk rock, it shouldn't come as a surprise that Charlie Murder has one of the best soundtracks of the year. The music not only fits the atmosphere perfectly, but it also lends credibility to the band. Their songs are genuinely catchy, sometimes overshadowing the simple gameplay. And as great as the punk songs are, the game is quick to show you its range. Some of my favorite songs include a 1980s synth riff during the flashbacks and a well-placed folk ballad in the final act.

Despite the great music and hand-drawn graphics, I ended up losing focus towards the end. Thanks to a sharp spike in difficult in the final act and the repetitive gameplay finally taking its toll, I found that Charlie Murder runs out of steam before the credits roll. This likely won't be the case when playing with friends, but this brawler went a few levels too long for this solo-player.

It also doesn't help that Charlie Murder came out mere days after Dragon's Crown, a beat-em-up that manages to evolve the genre in many significant ways. Even with the random loot and the leveling-up, Charlie Murder feels like a step backwards. Thankfully the game's story was engaging enough to keep me interested through most of the lengthy adventure.

And while we're on the subject of complaints, there are a couple gameplay decisions I can't endorse. For one thing, I found picking up weapons to be fidgety. The icon would pop up, but if you're moving or not directly over the gun, knife, sword or ax, your character will throw a punch and completely ignore what's lying on the ground. This is especially annoying in tough boss fights, such as a frustrating mummy encounter late in the game.

Despite a few hang-ups, I had a lot of fun with Charlie Murder. I loved the punk rock theme and enjoyed all of the wackiness they threw at me. It's a shame this game didn't come out a few months ago and not directly after Dragon's Crown. As retro-inspired brawlers go, this is one of the best. And at $10, Charlie Murder proves to be a lot cheaper than going to a real punk rock concert.
Charlie Murder is full of amazing moments you'll want to tell your friends about. Unfortunately, the repetitive gameplay and overlong story works against the otherwise fun package. The good news is that the amazing music and presentation makes up for a lot of its shortcomings. With Charlie Murder, you have a real killer on your hands.