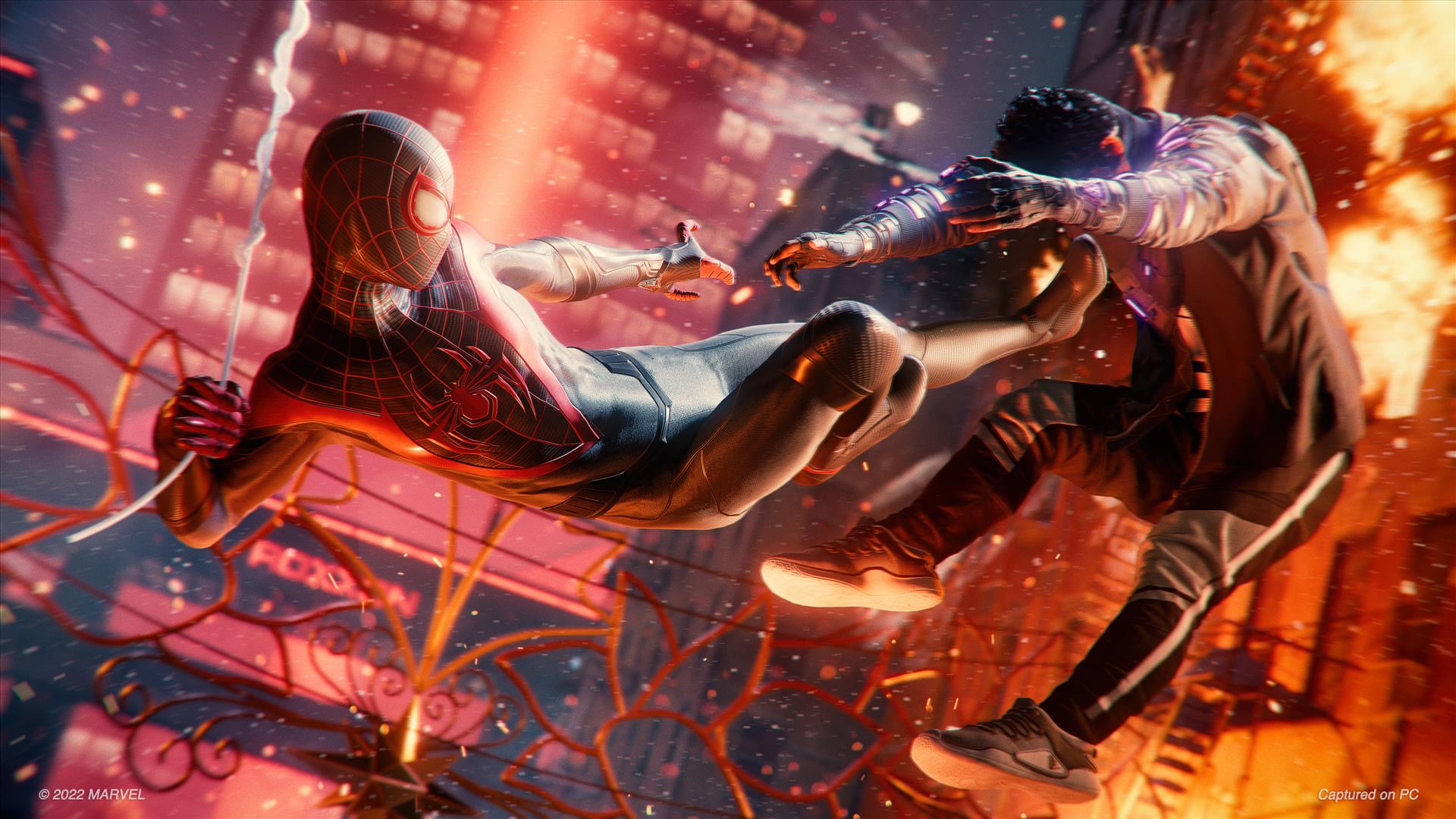 I can’t believe it’s been two years since I reviewed Miles Morales on the PlayStation 5 as one of the launch titles for that console. It was an amazing follow up to one of the best PlayStation 4 titles and we’re finally getting it on the PC.

I won’t go into the details of the game. If you want the specifics, you can read my review on the PlayStation 5 version. What I will go over is how it is on the PC, how it runs, and if I ran into any issues.

A quick summary of the game; you’re playing as the titular character who is tasked to protect New York City while Peter Parker is away in Europe with Mary Jane. The game takes place in the winter, so you get a different look into the city with holiday decorations and snow fall that blankets the city at times. Some classic villains show up, as well as some newer ones appear throughout the seven and and a half hour campaign. Yeah, it’s a lot shorter than Marvel’s Spider-Man, but you get to play around with the different powers that Miles exhibits and it’s a nice setup for the next Spider-Man game that’s coming from Insomniac.

There aren’t as many side activities as Marvel’s Spider-Man, but Miles Morales is a more compact and tightly knit story and adding all those other things that Spider-Man had would have artificially lengthened the game. There’s still plenty to do though and crime never stops in the city, and at least I’m not chasing pigeons around the town. Again, if you want to know more about the details of the game, check out my review on the PlayStation 5. It’s the exact same thing except, of course, all the nice PC centric features that have been implemented. 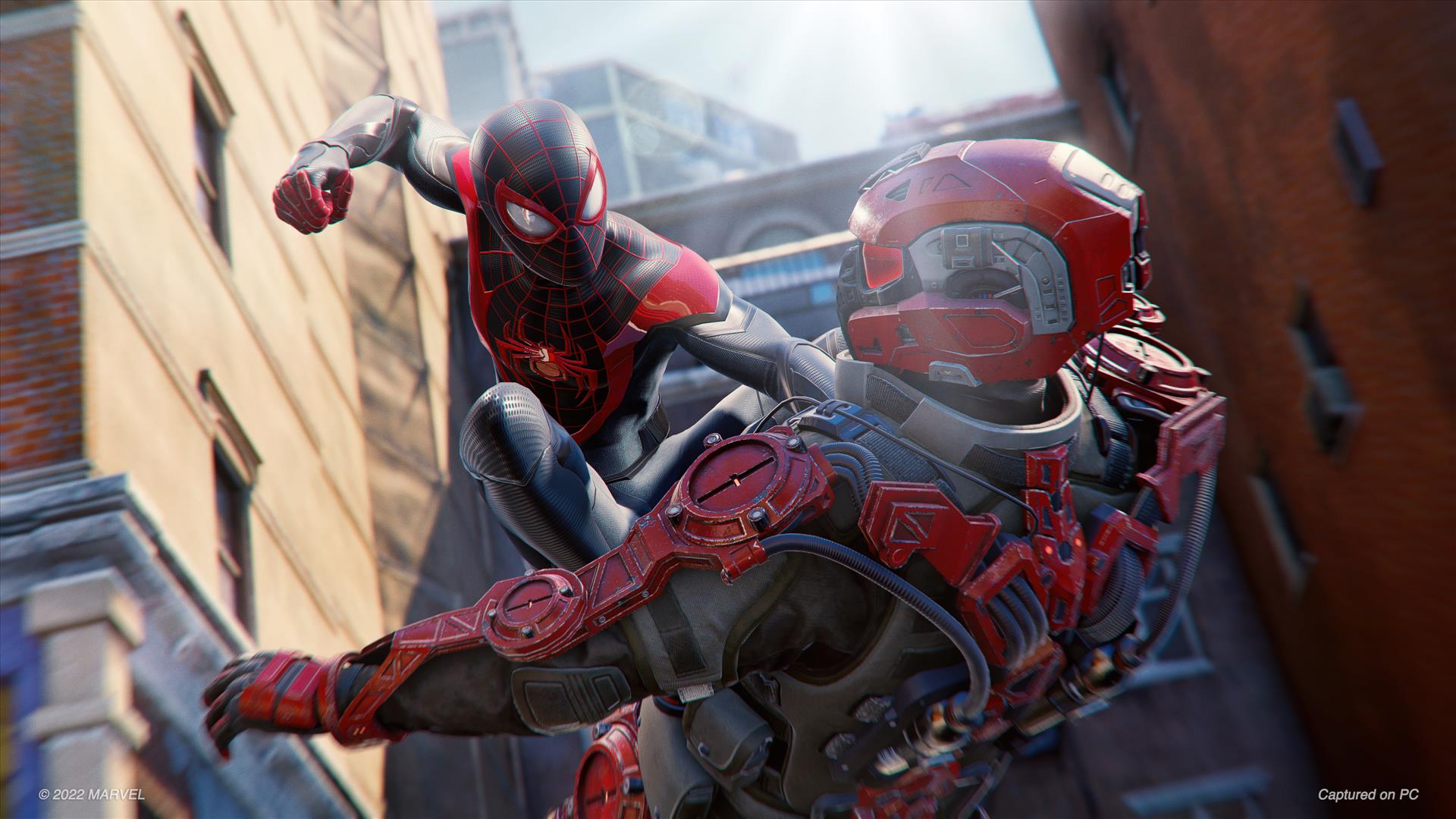 My system consisted of an AMD 5900X with 32GB of ram and a NVIDIA RTX 4090 playing on a 4K OLED TV, which basically lets me run the game at max settings with ray tracing. The game looks really good for a two-year-old game and with some new features such as more granular ray tracing toggles, DLSS 3, and ultra screen support, you’re getting the best looking Miles Morales game on any platform. Whereas the PlayStation 5 had settings to make it more visually appealing at a cost of frame rate, the PC version runs as fast as your PC will allow it unlocking a plethora of visual adjustments to allow you to fine tune your experience at a much more granular level. 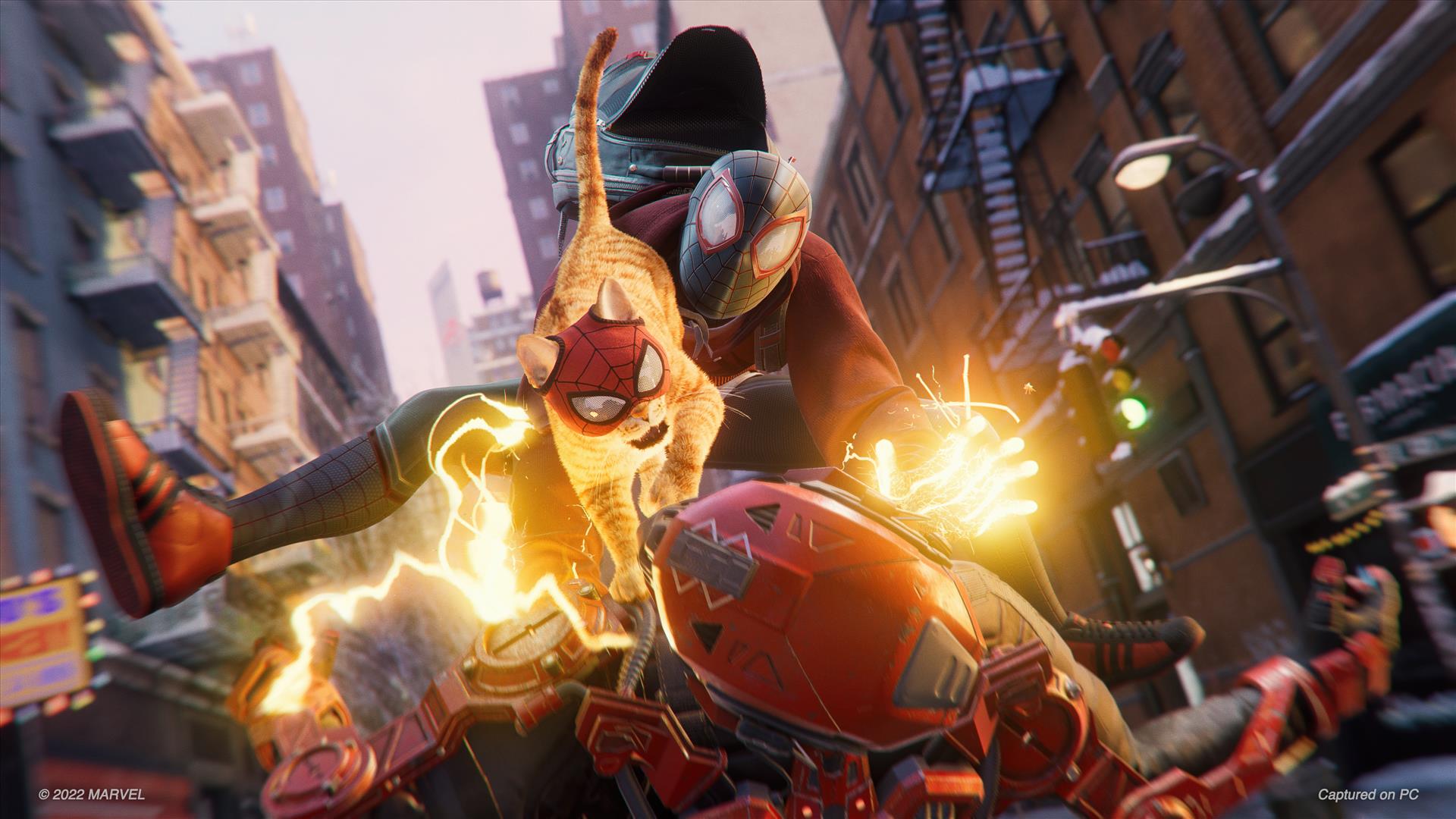 With 4K max settings and HDR on, the game just pops off the screen. Swinging through the city at over 90 frames per second in my setup, the game runs smooth as butter and doesn't have any of the weird bugs that showed up in Marvel’s Spider-Man. The winter setting really makes for a different look at the city as you swing around. The game has a ton of color-popping scenes. The Tinkerer’s henchmen really show well on an OLED HDR setup where the purple shines bright amongst their metallic armor. Some of Miles’ costumes look really great too, like the way the eyes glow bright white and have that smoke-like effect on his 2099 costume.

Miles Morales, like Spider-Man, is a CPU heavy game so even with a beast like the RTX 4090, you’re going to get around 60-70 FPS with DLSS offering a minute amount of improvement. This is with ray tracing on and as I said, high to very high on all settings. Miles actually takes more resources than Marvel’s Spider-Man, it seems. Don’t get me wrong, that’s still fast especially with all the features enabled and running at 4K. NVIDIA recently introduced DLSS 3 with Frame Generation to increase performance in games like Miles Morales which are more CPU bound and it works great. Turning it on, I saw my performance jump up to the 150 FPS range and even though the technology introduces some latency increase and minor visual artifacting in certain situations, I didn’t notice it at all and spent most of my time with the features turned on. This is with Quality DLSS settings along with Frame Generation. Keeping above 150FPS is pretty impressive and without Frame Generation, it wouldn’t have happened without some changes to how Miles runs on a PC. 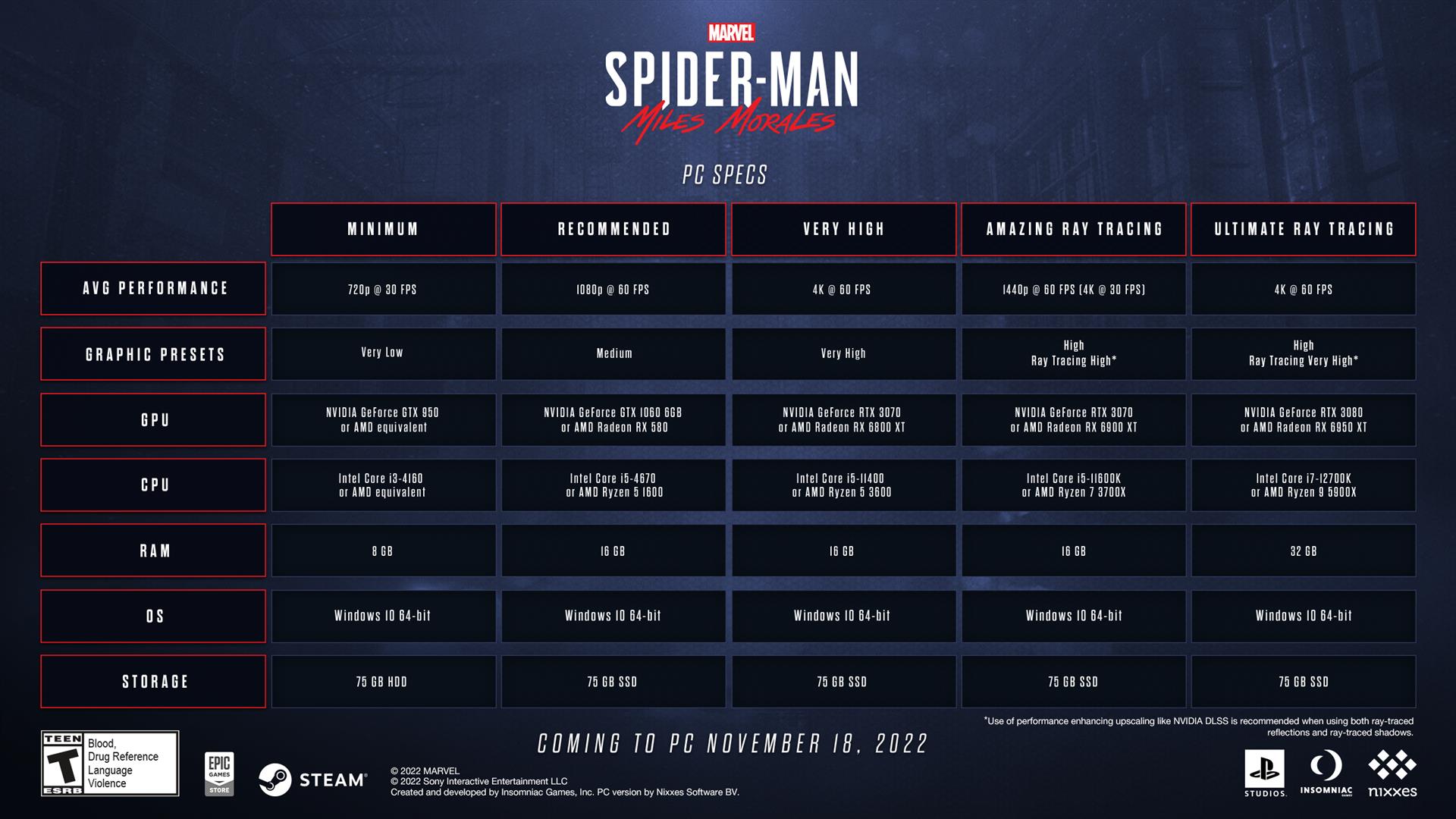 Miles Morales is also Steam Deck verified and like Marvel’s Spider-Man, it runs OK on the handheld. I do see it stutter more on Steam Deck when I was swinging around, but it’s not consistent. I did have some issues bringing up the map with the menu button. I would have to press the Steam Deck’s menu button a few times before it would pop up and just like the stuttering, there was little consistency around when it would or would not happen. Other than those two things, I didn’t notice any other issues playing on the Steam Deck and it is pretty awesome to have both Spider-Man and Miles Morales playable on the go.

As far as PC bugs or issues, I am happy to say I didn’t run into anything. I had a list of things like texture issues, crashes, and audio syncing problems with Spider-Man, but Miles Morales seems pretty devoid of bugs from my end. I didn’t have one time it crashed nor did I see anything out of the ordinary. Nixxes probably had a head start correcting issues with the Spider-Man port earlier on and were able to use that experience when bringing Miles Morales to the PC. It was a relatively painless experience playing Miles Morales on the PC and an enjoyable one at that.

The only knock on the game that I can think of is it is pretty short. But, if you want some more Spider-Man action and want to experience a character with some different powers, the Miles Morales is a good pickup at a $49.99 price. There’s still plenty of side quests to do after the seven and a half hour campaign wraps up which should keep you busy. Unfortunately, there’s no DLC for Miles Morales if you want more stories so this is all that you get until Marvel’s Spider-Man 2 comes out.

With the release of Miles Morales, PC gamers will be able to enjoy both great Spider-Man games if they don't own a PlayStation 4 or 5. The game does need a solid machine, and if you have a NVIDIA Ada Lovelace card, you can unlock some great extra performance. It's a continuation of Marvel's Spider-Man with some new powers and some slightly different enemies, but it's solid and will give fans of the first game more of what was good to begin with.