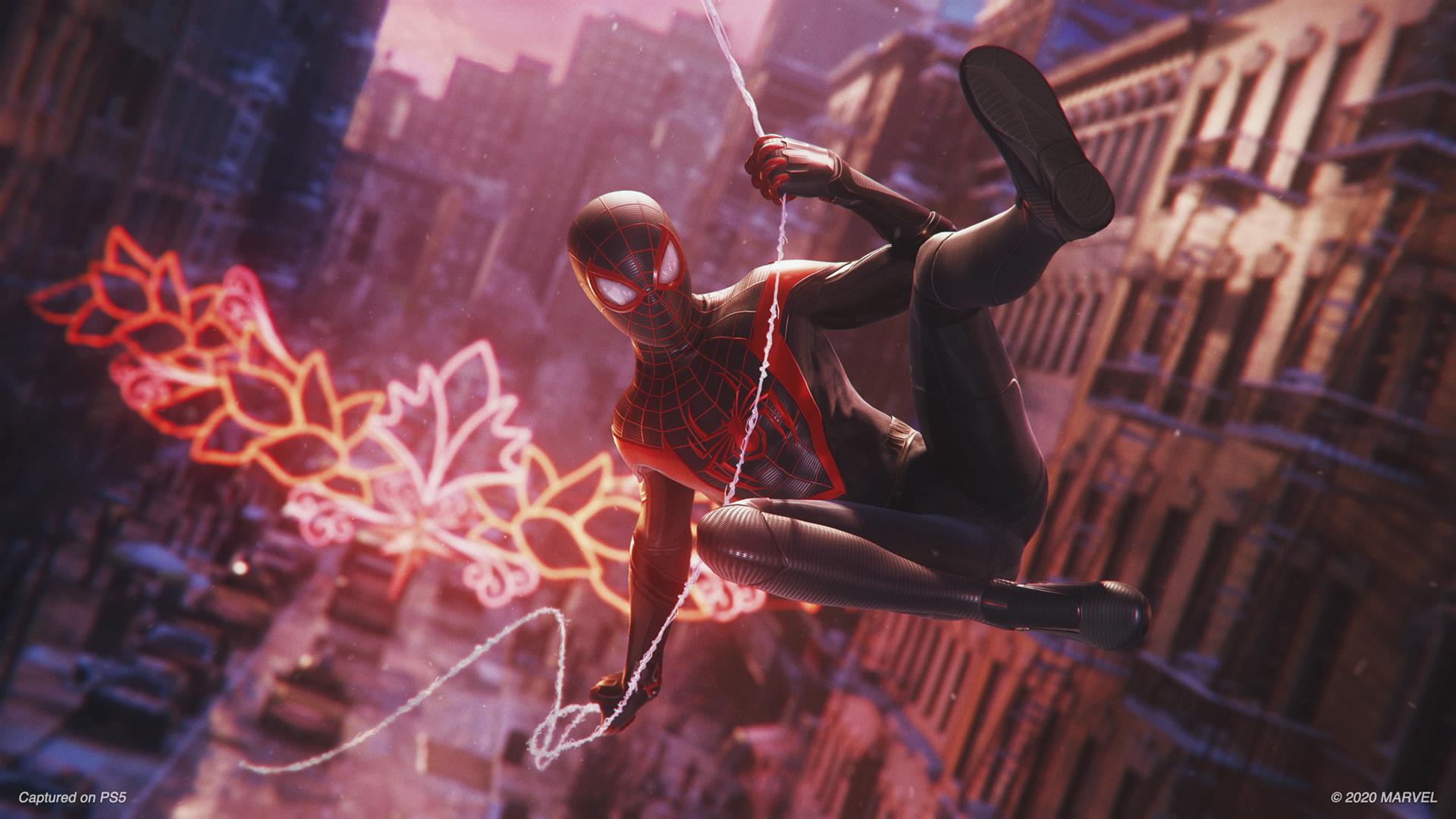 Alright, people, let's do this one last time. My name is John Yan. I helped start a gaming website. And for 26 years, I reviewed plenty of consoles. I'm pretty sure you know the rest. You see, I got sent a PlayStation 5 with Miles Morales, played through the game, saved the city some more, enjoyed the haptics on the controller, maybe too much. The graphics were really tight. I went through the story, blah, blah, blah. I had some rough spots, but I handled it like a champion. Because, you know what, no matter how many times I got hit, I always got back up.

Marvel’s Spider-Man: Miles Morales is the launch title for the PlayStation 5 and it’s a wonderful follow up to the great Spider-Man game from Insomniac Games. Following the ever popular titular character, you experience Miles’ story as he first develops his powers and comes to grips with the responsibility of being a superhero.

When I first experienced Spider-Man, I compared it to the likes of the Batman Arkham series, because that’s one of my favorites and a lot of the things in Miles Morales's gameplay is similar to that game as well. The quick-action combat that Miles can perform gives a ballet-like quality in gracefully moving from one enemy to the next as you dole out punches, kicks and webbing.

Miles has more powers than Peter Parker as he can channel electrical attacks—dubbed Venom Strikes—and can also turn invisible. Both are very prominent in the gameplay and you’d be wise to take advantage of them to make your life easier. As you fight, your venom meter increases and when full, you can unleash an electrically charged punch to stun a person where you can continue your attack on a helpless victim. They are very effective against those with weapons that can block Miles’s punches and kicks, so you’re really encouraged to use the Venom Strikes in the game.

The meter will also facilitate the ability to heal yourself during the fight. When you get into situations where your health is running low, a quick press down on the D-Pad will heal you slightly, provided you have some of your Venom meter filled. It’s this balancing act of healing or dishing out punishing electrical blows that puts a little bit more of a strategic element into the combat. Should I risk taking this enemy out quickly and hope I can continue dodging the other attacks long enough to heal myself, or do I be more conservative and keep my health higher and risking getting hit more from the number of bad guys left?

So the extra powers add a new wrinkle to the gameplay. I found myself doing a lot more stealth playthrough, especially once Miles gets the ability to turn himself invisible. Like the previous game, though, you’ll increase your abilities, gadgets, and suit to add some more toys and options during a fight. You’ll get tech parts and activity points to spend on these upgrades as you finish main missions and side missions.

Manhattan is a busy city, so there are lots of NPCs walking around and plenty of traffic in the streets. It feels alive. You’ll see a lot of activity happening as you’re moving around. Swinging around, you might be notified of a crime near you. You can do your friendly neighborhood Spider-Man duty and stop those crimes. There are some training missions and even side missions to record sounds throughout the city. Miles also has an app where citizens can request help. All told, you’ll have a ton to do during and after the end of the main storyline to keep you busy for hours. 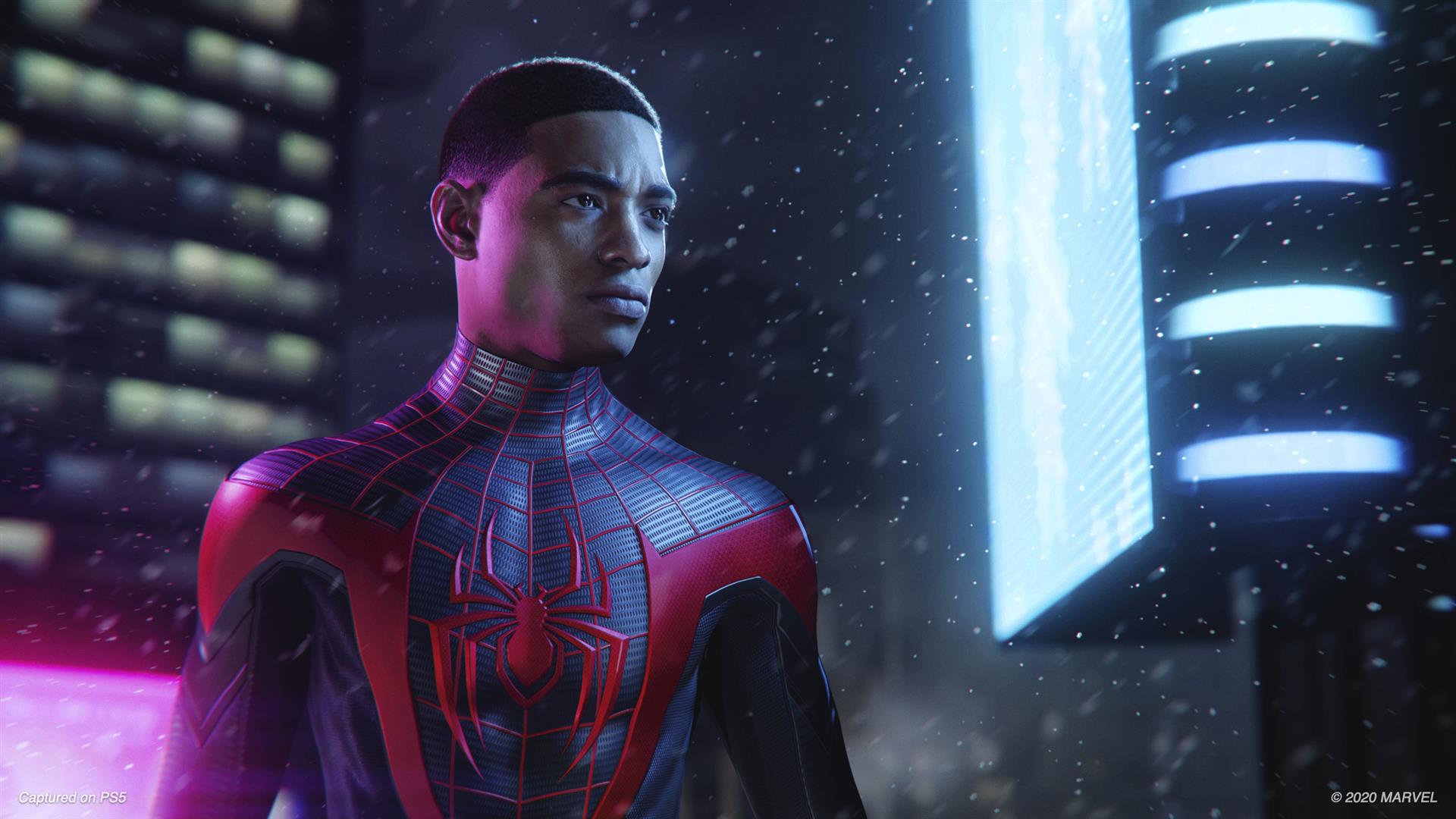 Speaking of the main storyline, it took me around eight hours to complete. It’s definitely a tighter, shorter story but it’s fun nevertheless. If you’re a comic fan, you’ll recognize a lot of the characters. The Tinkerer is somewhat different from the comics, but it works for the game. Miles's Uncle Aaron has a prominent role in the game and Peter Parker’s is more of an overseer in this one, like Tony Stark in Spider-Man: Homecoming. Again, the story isn’t that long, but it’s got a satisfying beginning, middle and end.

There were only a few times I got frustrated with the game, and for once it wasn't the end game. Fights can get a little tough if you don’t take advantage of your Venom Strikes and invisibility, but for the most part, I didn’t have too much trouble getting through it on the default difficulty level.

We knew the next generation of consoles would have a big emphasis on improved graphics and Miles Morales really shines here. Now, we know the graphics will be improved in future games as developers take advantage of the hardware in the system—but for a launch title, Miles Morales looks gorgeous in 4K HDR. I have the console hooked up to an LG OLED TV and everything just pops off the screen. 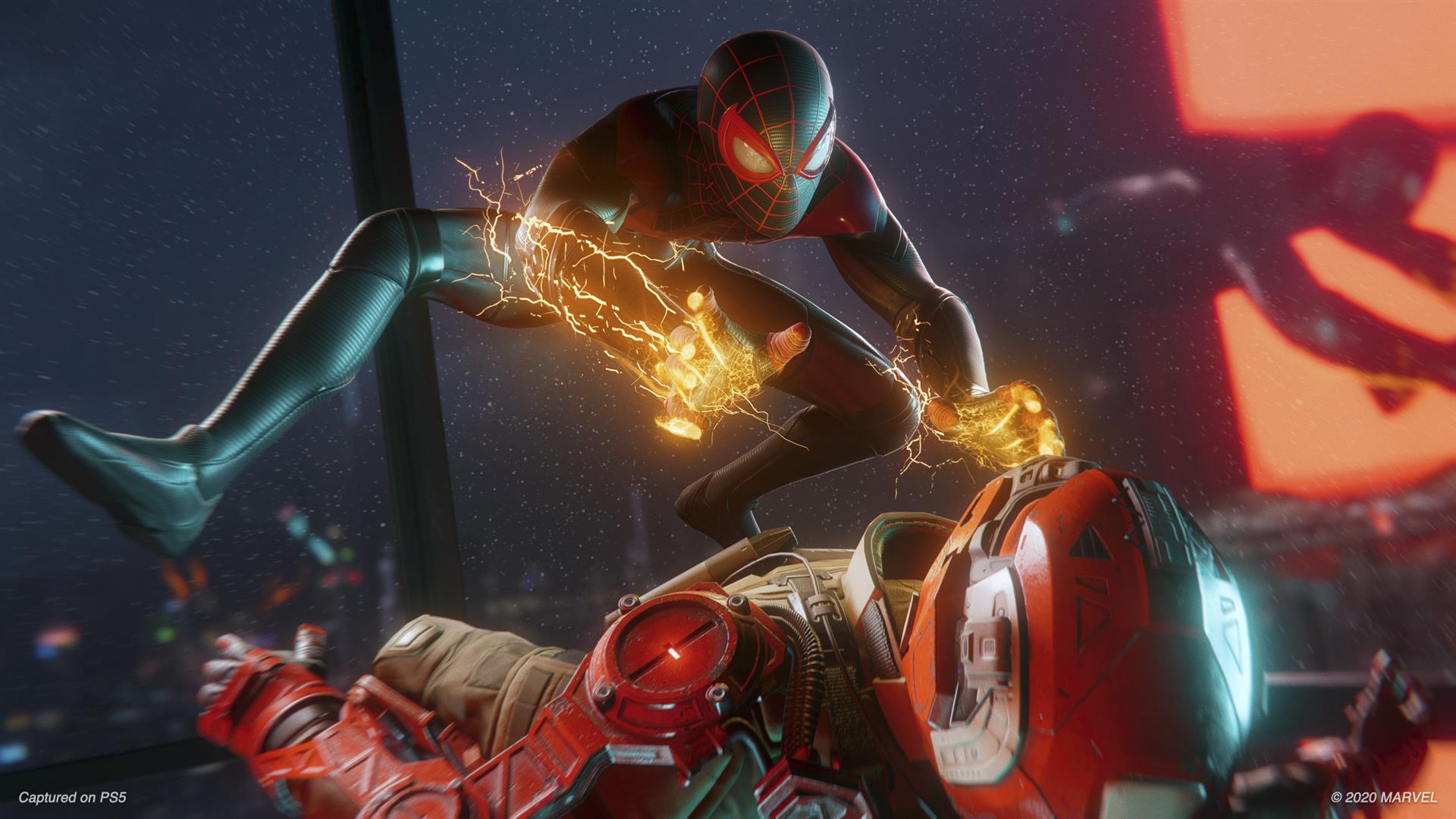 I decided to play the game in fidelity mode, which runs at 4K 30FPS with ray tracing, enhanced lighting, and other visual effects turned on. There’s also a performance mode which turns off those extra features, but lets you run the game at 60fps. For me, the performance mode does look smoother and you can tell when Miles is swinging around the city. With fidelity, it isn’t as smooth, but man, the game looks so nice with the extra features that I stayed on fidelity mode the entire time and didn’t feel like I missed anything with the halved FPS performance versus the other mode.

Textures are super high quality and you can see the detail of the suits that Miles wears. There were many times I just stared at all the intricate patterns in the suits and marveled at how detailed they were. There’s a vast amount of detail in the city where the increased polygons and textures the PlayStation 5 make everything look great.

With the game taking place in the Winter season in Manhattan, you’ll get some immaculate winter scenes with nice-looking snow falling down at times. Blizzards can impede your vision with heavy snowfall. And yes, as you walk through snow, you’ll leave tracks behind.

HDR will make the game shine on some levels, especially where there are dark areas lit up by neon. I love the contrast of colors in some scenes, and during the daytime the city really pops in HDR. Add in enhanced lighting and ray tracing when fidelity mode is on, the Miles Morales really takes off with vibrant colors. 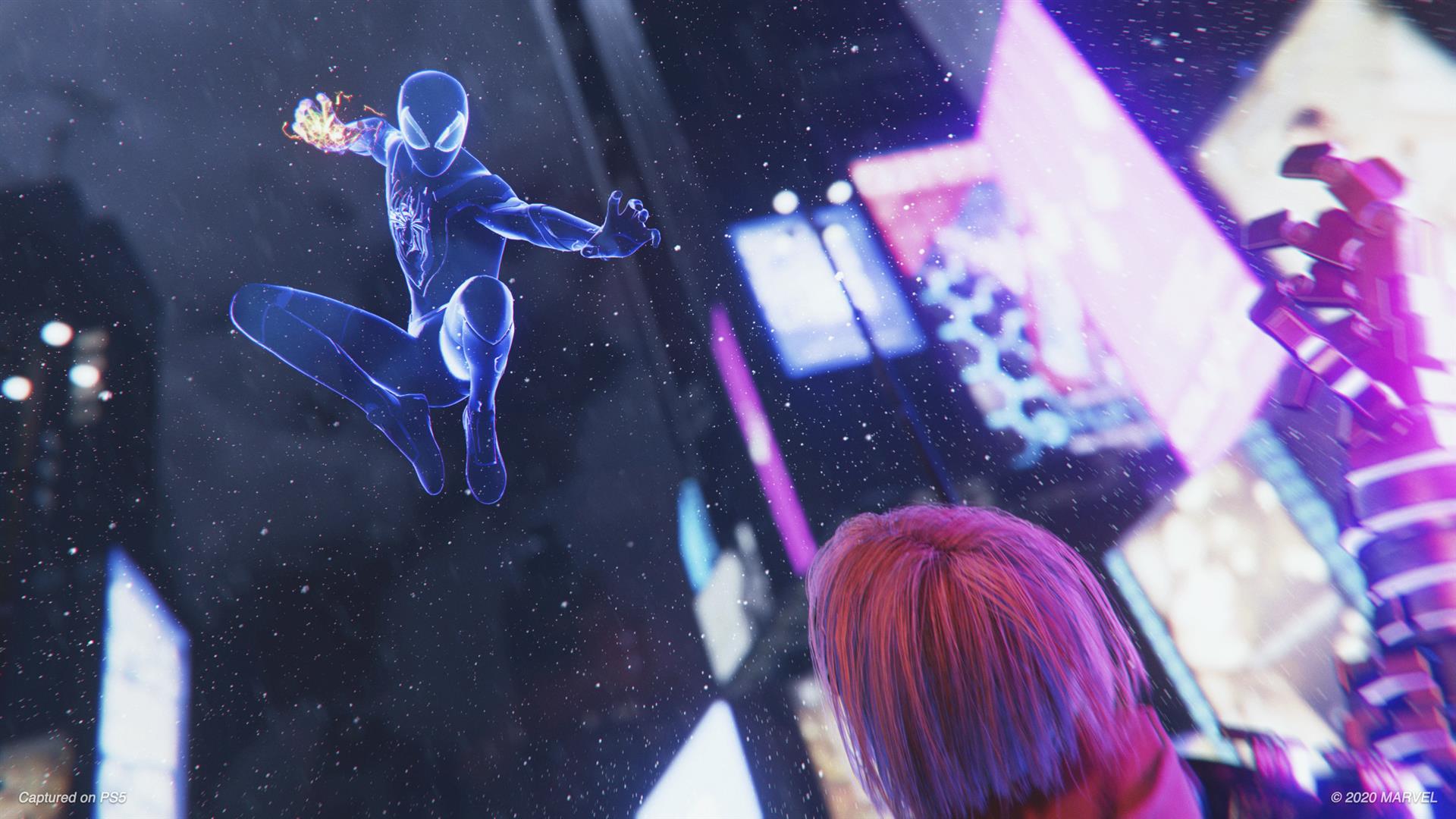 While the previous consoles weren’t that bad in having good quality textures, the extra power afforded to you by the AMD RDNA architecture in the PlayStation 5 delivers graphical fidelity only seen on PCs of recent years.

As with my review of the console, the DualSense controller really enhances the gameplay of Miles Morales. Besides the usual rumble and shaking when doing punches are charging up a Venom Strike, the subtle haptic effects really come together to offer you a deeper connection to the world.

In the beginning when Miles rides the subway, the DualSense controller will rhythmically vibrate to simulate the bounce of a train rolling on the tracks. When Miles helps someone put a sofa into the back of a truck, the game simulates the feeling of the sofa legs dragging on the floor of the truck as they slide it in. There are times the controller will rumble a little as cars drive by him. Zip around and you’ll feel a slight rumble as your spiderweb flies out of the wrist guards. These little things add up to the experience and show Insomniac Games attention to detail in providing not only top notch gameplay and visuals, but on the physical level as well.

I did have a few hiccups while playing. During an early scene with Rhino, my game just locked up in a cutscene. Later on, a phone call with Uncle Aaron wouldn’t end so I was stuck without the use of my spider-sense to see where certain activity icons were in the world. Hopefully, a patch comes out on release day to address some of the random issues, but those were the only two I found in my 15+ hours or so of playing.

Marvel’s Spider-Man: Miles Morales is a great standalone game that continues the story that Insomniac has crafted. While the main story is a little short, there’s still plenty of things to do around the city. The graphics, especially for a launch title, shows off the power of this next generation console. The DualSense controller adds to the immersion in the game, giving you a tactile connection to the world. Spider-Man: Miles Morales is a solid entry in the series and a great launch title for the PlayStation 5.

Marvel's Spider-Man: Miles Morales shines on the PlayStation 5 with great graphics, solid gameplay, and excellent use of the new DualSense controller for a seriously fun game to play on the brand new console.