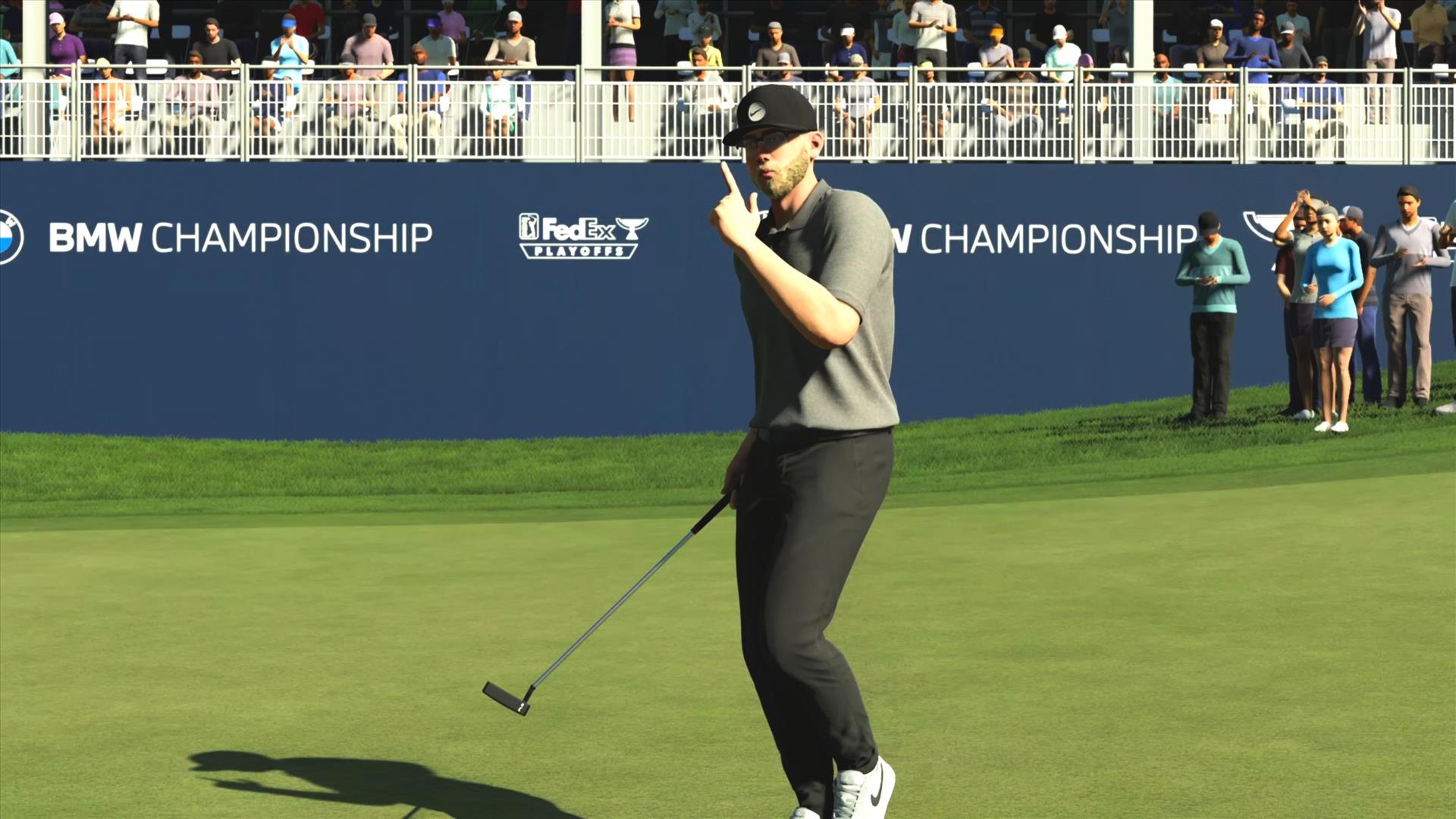 The last time I took up my digital clubs and hit the course in a golf simulation was in Tiger Woods PGA Tour 12: The Masters, and somehow, after playing PGA Tour 2K23 I don’t feel that I’ve missed anything during my decade-long hiatus. To be fair, that is an indictment on the sports genre as a whole, rather than this one game alone, but I certainly expected more out of my first golf sim experience since my last time out on the PlayStation 3. Ultimately, PGA Tour 2K23 sits on a solid foundation of gameplay, but there's not enough between the walls of this clubhouse to make it feel like a home.

Proceedings get underway with a solid tutorial on the basics of golf and how to play, which strangely also includes the best voice over commentary in the entire game. You’ll then create and customize an avatar to your liking, which you can change at any point after the fact. I spent some time creating myself (or at least tried to) but I don’t think anyone that knows me would see any resemblance. There are several player archetypes to choose from which determine your base ratings for attributes, such as swing path, swing power, and shot shaping. You can also change your archetype at any point, so if you decide to be a big-hitting power golfer at the start, only to discover that you can’t sink a putt to save your life, it’s a quick fix. On the standard difficulty, however, your archetype doesn’t seem to matter all that much.

The golf itself is solid, and even for a casual like myself it is incredibly easy to pick-up and play. Although, admittedly, I struggled in my very first career mode qualifying event and had to play it a second time. Discovering the putt preview feature was a revelation (hold square on PlayStation, or your console equivalent) and it took me from six-over par in that first event, to winning the second attempt with ease. Miraculously, I also sank an 84-foot putt during my second try. Putt preview at times feels like cheating, but the greatest satisfaction during my time with the game came from sinking an incredibly long or difficult putt. Conversely, the majority of my angst was the result of a near-miss putt for birdie or eagle. 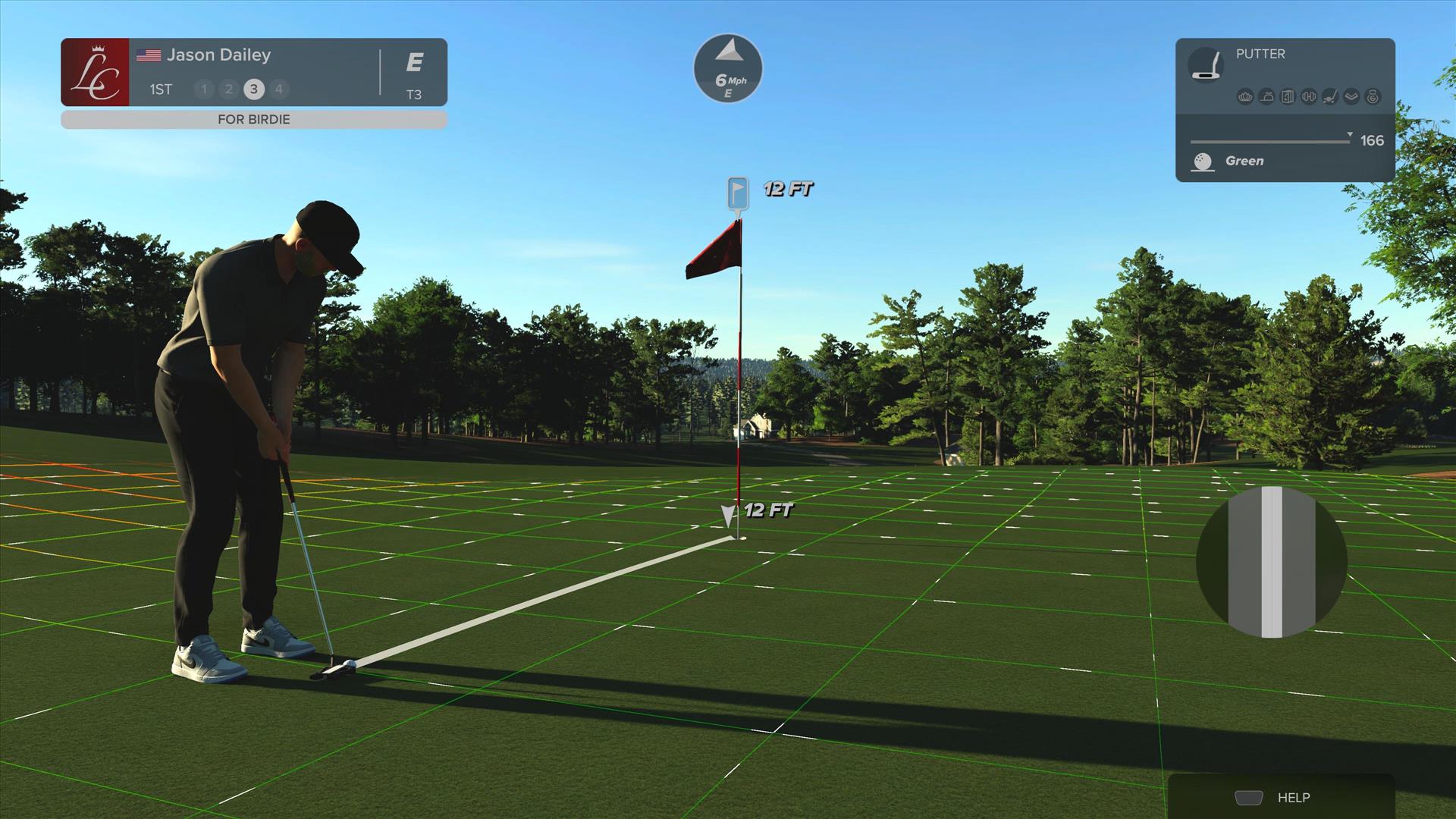 The MyCareer mode is the marquee mode in PGA Tour 2K23 and each player begins in the real-life Korn Ferry Tour developmental league. It’s a feeder for the PGA Tour in the same way that the minor leagues are for Major League Baseball. Winning three events on the Korn Ferry Tour awards automatic promotion to the PGA Tour, where you will compete against real-life professionals for the season championship – known as the FedEx Cup.

Finishing an event will net you XP and, depending on how well you performed, could also catch the eye of sponsors. Gaining XP will level up your golfer and grant skill points, which are used to unlock skills in various categories. Skills apply to each club type – from driver to putter – and apply buffs such as a boost to swing path when driving off the tee, or a putt path boost on the green. Skills are only activated under certain parameters, however. To activate a putt path boost, you might need to hit two putts within five feet of the cup, for instance. Like archetypes, skills have a mostly negligible effect on the standard difficulty. As you progress, sponsorship opportunities present themselves early and often, and they cover three categories: apparel, clubs, and balls. Accept or decline sponsorship deals at your leisure, but beware that changing them constantly can hurt your reputation. Performing well during events boosts your reputation with sponsors and unlocks new equipment.

Completing tournaments and leveling up also unlocks club parts, which allow you to further tune your attributes by modifying your golf clubs to gain stat boosts to the various categories like swing path and lie range. It’s an interesting way to tweak your playstyle and to compliment the strengths and weaknesses of your game. 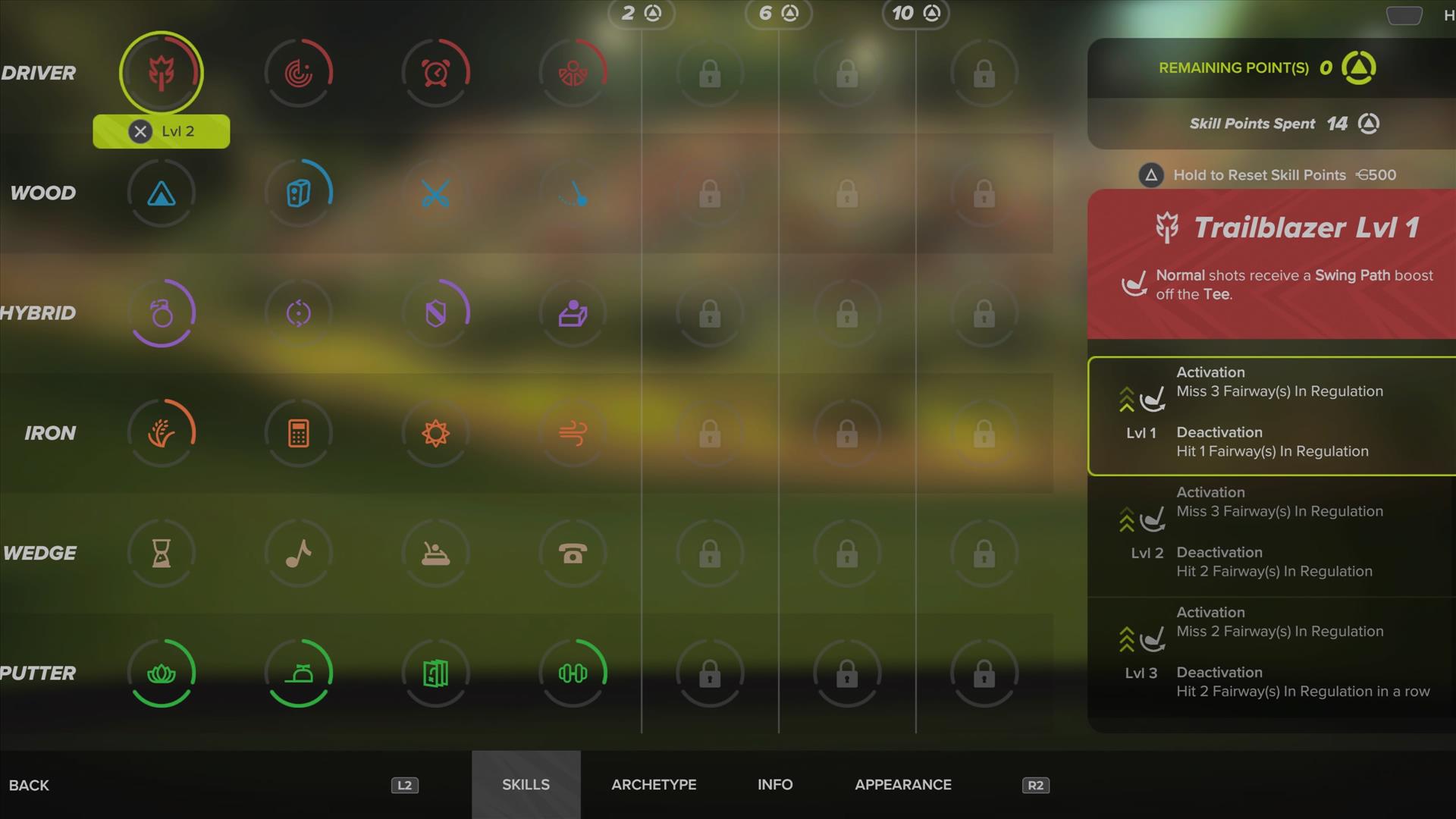 The game also presents you with a slew of rivals to compete against while on the PGA Tour, as a sort of game within the game. Rivals are categorized by tier, and they range from low-level nobodies to Tiger Woods. During tournaments, you’ll get live look-ins at their performance so that you can keep tabs, but on the standard difficulty these rivalries are inconsequential and the live look-ins are more of an annoyance than anything else.

If career modes aren’t your thing, or if you crushed the competition and won the championship in your first season (cough), there is a variety of multiplayer modes as well. Casual mode lets you take part in offline or online matches across several playlist types: divot derby, stroke play, skins, match play, alternate shot, rollers, head to head, teams, and wagers. There is sure to be something that will resonate with you. For me it was divot derby, a battle royale-style mode that offers fun, quick rounds of golf. Once the first shot is made by any player on a hole, it starts a countdown and becomes a golf version of musical chairs, where players rush to put their ball in the cup to seal a spot in the next round. It’s a lot of fun and a real standout amongst the competitive modes. 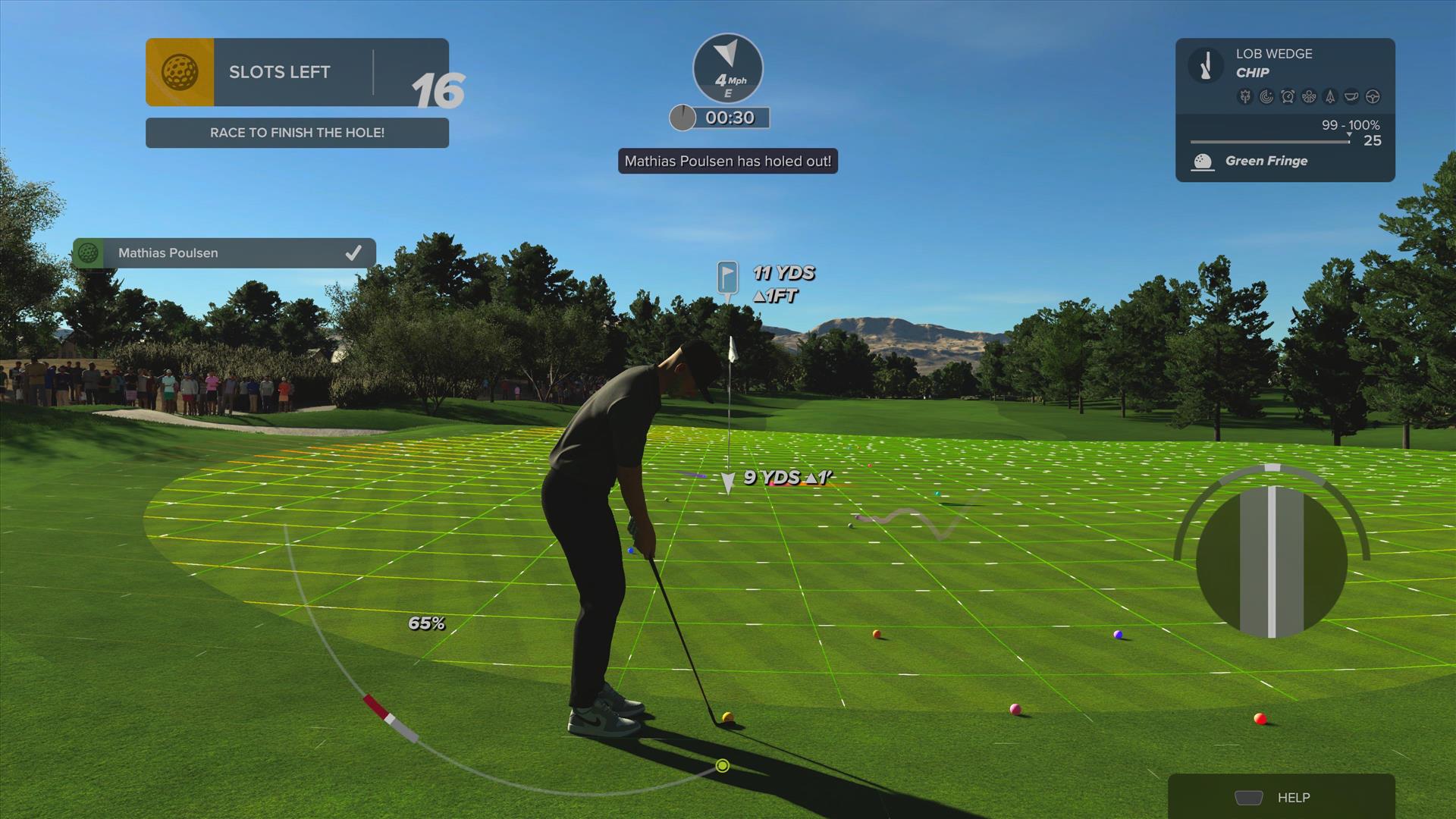 Societies are online leagues that allow you to compete with other players across multiple events. As you play rounds, a live online leaderboard updates you on how other human players are doing in real-time. This mode has promise, but unfortunately is riddled with glitches. On multiple occasions, my score on a hole was not accurately recorded. I shot a three on a par four, only to be given credit for par, for example. Glitches like this make it impossible to compete with players who are shooting a ridiculous 17-under par, and therefore zaps the fun out of Societies. There’s also a Topgolf mode which can be played either online or off, but I had a hard time getting matched with other players, and when I did, matches weren’t always full.

The final mode on offer is a full-blown course designer – emphasis on “full-blown”. The course designer is very robust, allowing you to customize even the finest minutia, from how many par 3s are on your course to where the ball washers are located. You can even edit the terrain of the course itself. Place a sinkhole in the middle of the fairway that no ball is escaping from, or make every putting green an insurmountable plateau. Once designed, you can publish your courses online for others to play. 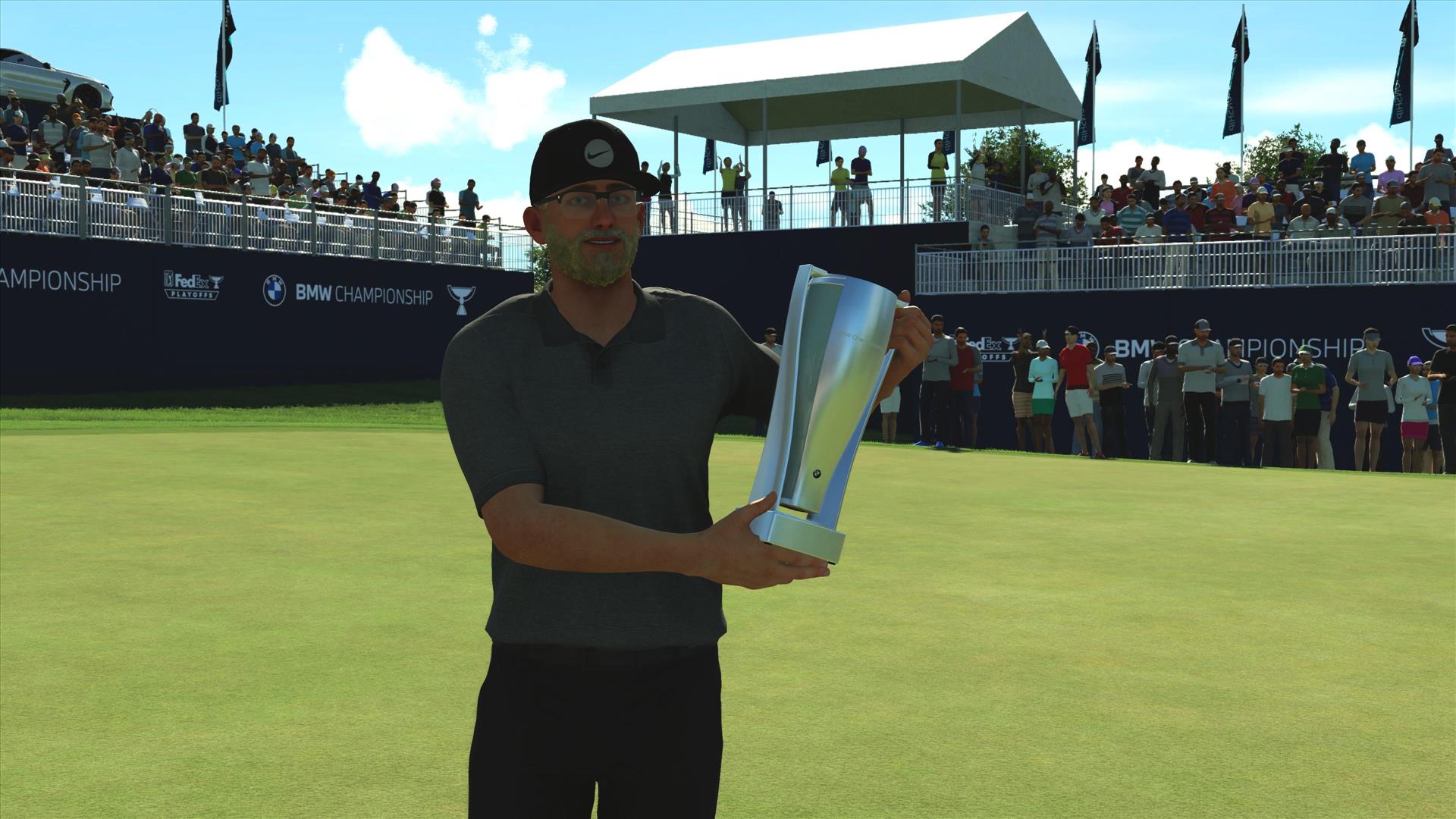 It feels as if we are approaching an inflection point for sports games, as the conversation around annualized franchises in general has begun changing tenor over the last few years. While many people are more than happy with their yearly installment of Madden or FIFA, there is a vocal minority growing larger and louder each time a sports title releases and fails to move the genre forward. Although it’s been two years since the last entry in the series, PGA Tour 2K23 doesn’t do enough to set itself apart from its predecessors. I skipped an entire console generation and still feel like I haven’t missed a beat. It’s a solid golf sim, and will scratch an itch if you’re a fan of the sport, but if you’ve played one since the PS4/Xbox One generation, then you’ve likely played this one too.

PGA Tour 2K23 is a perfectly fine golf sim that manages to neither impress nor disappoint. It’s unlikely that you’ll hate it, but it’s likely that you’ll be left wanting more out of it. If you’ve played a golf sim in the last decade this one will feel very familiar to you, for better or worse. 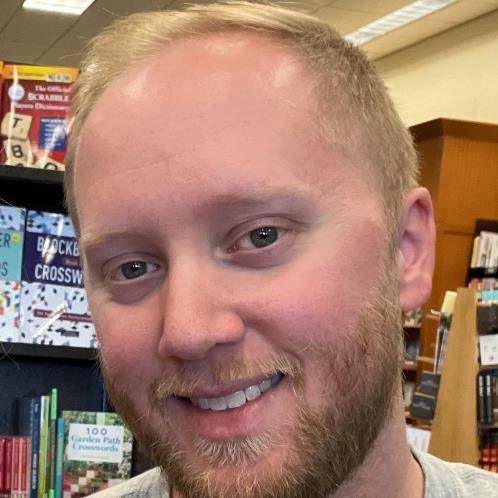