God of War with NVIDIA DLSS and Reflex

God of War may be four years old, but it’s out now on the PC and becomes the first God of War game available on the platform. Our reviewer loved it back when it released on PlayStation 4, and even though it’s old in terms of game years, the game still looks absolutely amazing.

On the PC, there have been improvements that help make the game look and perform better. For starters, there’s ultrawide monitor support. It’s what I’m using currently to play games and a feature I’m really glad Sony has implemented.

DLSS is just pure black magic to me. Even as a developer myself, I’m astounded how machine learning allows for games to run at lower resolutions, be upscaled, and look as good and sometimes better than native resolutions. For God of War, there are four DLSS options available to you: Quality, Balanced, Performance, and Ultra Performance.

As you go from Quality to Ultra-Performance, the game runs at an increasingly lower resolution. DLSS then upscales it to whatever your current resolution is and you’ll get a performance uplift. That means if you’ve got the headroom, you can turn on more features and still get great performance with DLSS on.

NVIDIA was kind enough to send God of War over for us to test. I played the first few minutes of the game on Ultra settings as it was easy to do a consistent run of the beginning before the fighting begins. I ran it without DLSS, then on each setting a few times and here are the average scores. 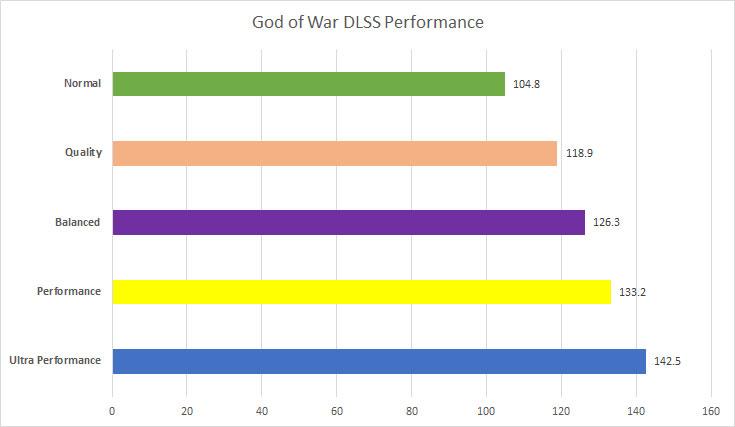 Balanced seemed to work really well and I honestly couldn’t tell it was running with DLSS on without having to do some screenshot comparisons. You’re basically getting a free performance uplift if you have a compatible NVIDIA card by turning on DLSS. Unless you’ve set the PC to run at a constant 60 FPS, there’s no reason not to turn it on and even then it doesn’t hurt to have it on even the Quality setting if you are already using a performant PC.

NVIDIA Reflex is a technology that helps minimize the lag between pressing a button and seeing the action happen on screen. Most of the games touting this feature are first person shooters and all the demos I’ve seen pertain to using a keyboard and mouse.
I emailed NVIDIA asking if this works with a controller because that was my personal preference when playing God of War. He got confirmation back to me that yes, Reflex will work for that and all peripherals.

So with that I plugged my PlayStation 5 controller in and tried to do some testing. I don’t have the equipment to really test if Reflex worked so the best I could do was use my Samsung Galaxy Z Fold 3’s super slo-mo feature and record the screen and my finger tapping on the attack button to see which one reacted faster.

I did this a few times with both no Reflex enabled and then Reflex+Boost and while I couldn’t feel any improvement myself, the slow-mo did show that having Reflex+Boost on was a very slight improvement in response times. It wasn’t significant, but there was an oh-so-slight improvement that I could see visually in the video. Even very small latency improvements would translate to better reactions in a game so I definitely suggest turning this on if you have a NVIDIA RTX card.

While there is no ray tracing, the two RTX features in DLSS and Reflex do have some tangible improvements when running God of War on the PC. As I said, it still looks incredible for a four-year-old game, and having the option to increase video performance without much if any video quality degradation is a nice option. Getting better response on controllers or mouse and keyboard is also something that’s really nice to have as perhaps that small amount of latency improvement might be the difference between life and starting over at a checkpoint.