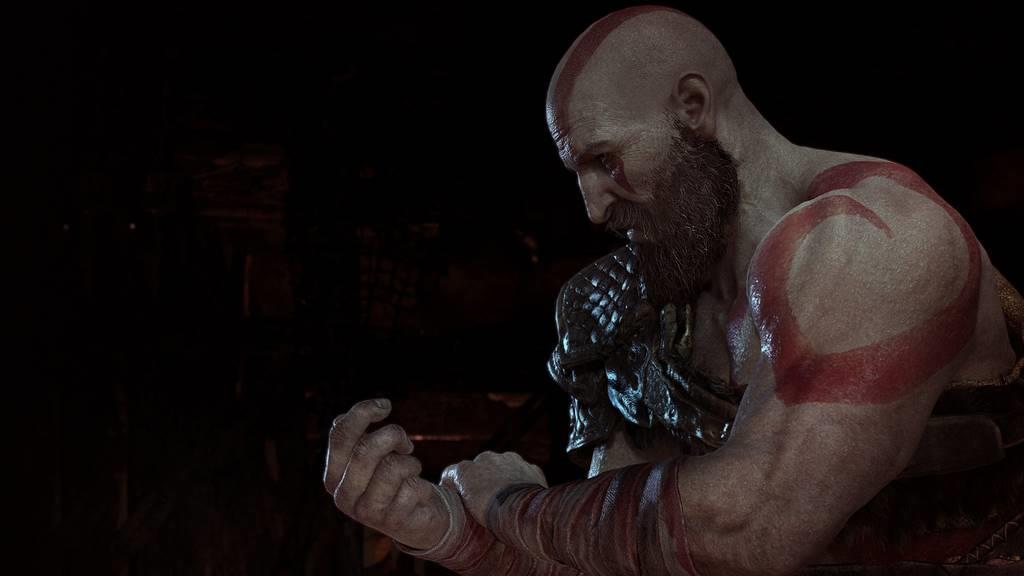 Kratos has been doing a little growing up since we saw him last. He’s grown in ability, he’s grown as a father, and he’s grown a beard. No, he hasn’t been saddled with a dad bod. But there’s certainly more wisdom in his eyes, more furrow in his brow, and less strain on his vocal chords. He’s toned down the yelling, but he hasn’t toned down the brutality when it comes to a good old fashioned fist fight.

The third-person beat ‘em up stuff is all here. The action-adventure puzzle solving is, too. So, even though God of War (2018) is a reboot of sorts, you’ll recognize the series’ DNA. Solve environmental puzzles with your smarts, solve problems with hacking and slashing, and open lots of treasure chests along the way. The balance between these core gameplay tenets is in near-perfect proportion. Just when you’re getting tired of putting two and two together, then you’re given a chance to bash some heads together instead. Just when you’re getting tired of cracking skulls, you’re given a head scratcher to solve.

Kratos is the God of War. He’s got an axe now, though he’s got less of an axe to grind (har har). He’s got a kid now, too, who’s doing a lot of growing up himself. Kratos has left Greece for a new place in the Nordic realms. Even though he’s trying to keep a low profile, trouble literally comes knocking on his door. Suddenly, Kratos and his boy, Atreus, have a personal endeavor that's now become a much more dangerous undertaking. Even though they’re not ready to take on this quest, they no longer have any choice. It’s time to go. 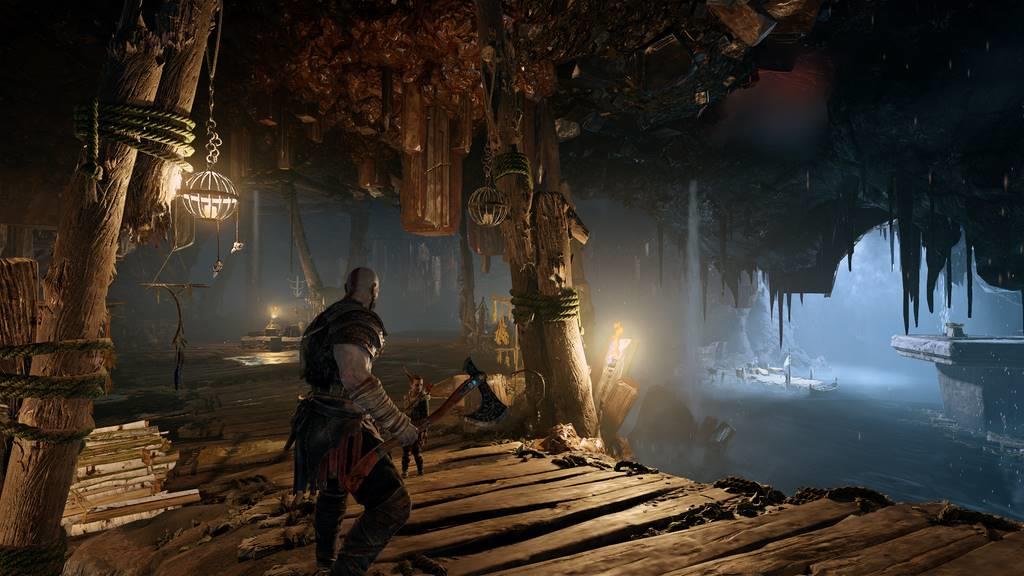 So they embark. It’s a quest that will scale mountains and cross realms. It will span a mythological lake while tackling what it means to be human. Well, “human.” The entire adventure has got a width and breadth that kind of left me breathless. Having a boy along, however, takes the quest inward at times. In the face of countless external threats, it’s the introspection that propels the boy’s relationship with his father. It’s the inner deep dives that form strong paternal bonds between Kratos and Atreus. Raising a boy is not the same as raising a warrior and Kratos must do both.

That’s his greatest challenge. Knowing when to invoke positive reinforcement or to denounce negative behaviors. Knowing when the boy needs a pat on the back or a shove in the right direction. As a dad myself, I can attest that God of War’s writers put some very real parenting issues into play here. It's been fun hearing how many ways Kratos can say the word “boy.” He can say it as encouragement or discouragement. Commandingly or questioningly. As a gentle reward or a harsh rebuke. Kratos is a man of few words. He says more through inflection than through exposition. Is his logic sound? Usually. Is he doing more harm that good with his grumpy demeanor? Sometimes. Am I secretly taking notes on how to handle my own eight-year-old? Maybe. Kratos isn’t a perfect dad. And while Atreus is a solid kid, he’s still got a lot to learn, too. They both do. 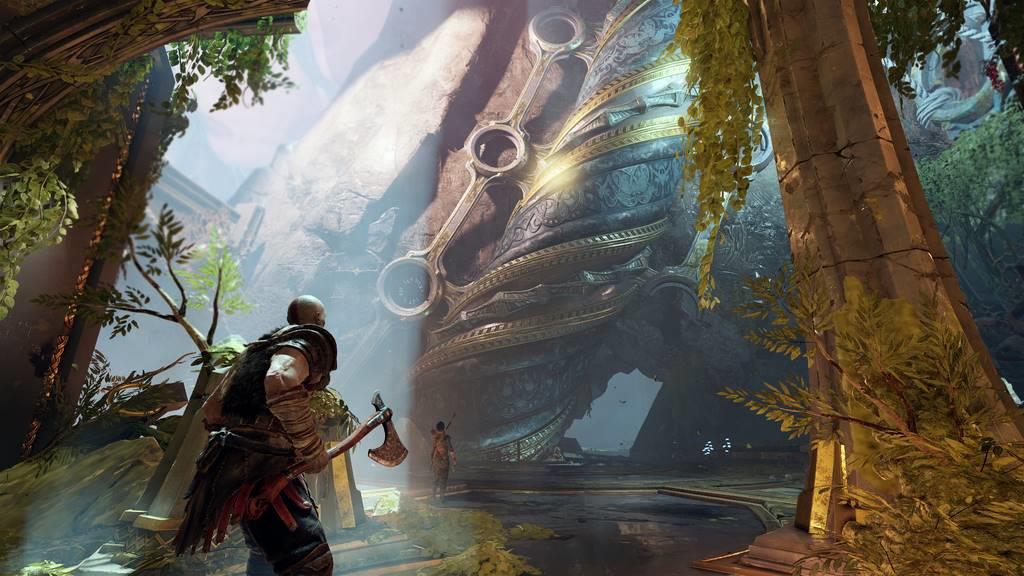 There are genuinely funny, caring, and crude characters along the way—and they're not just funny/caring/crude “for a video game.” But laugh-out-loud funny, heartwarmingly caring, and grimacingly crude. Including Dad of War and Son of War themselves, this is the most memorable cast of characters I’ve met this side of a Naughty Dog adventure. I wasn't expecting to do this, but Kratos and Atreus can add their name to now-famous adventure game duos like Joel and Ellie from The Last of Us, Chloe and Max from Life is Strange, or, heck, even combat-ready partnerships like Jak and Daxter.

Kratos’s boy doesn’t turn God of War into one long escort mission. Far from it. Atreus is an extension of Kratos. The boy, armed with a bow and arrow, can distract enemies bearing down on Kratos. He can call out Kratos’s physical condition, if the red color infringing on your game screen isn’t enough to clue you in on your imminent death. And, because he’s a boy that kind of does what boys do, he’s always running a little ways ahead—which can be handy in knowing which way to go next. Atreus is a steady archer, a voracious reader, and an accomplished artist and writer. He maintains a skillfully written and illustrated journal of the monsters, goals, and collector’s items along the way. He can read Nordic runes, which is a valuable skill when traversing a new land and your father happens to be an illiterate immigrant. 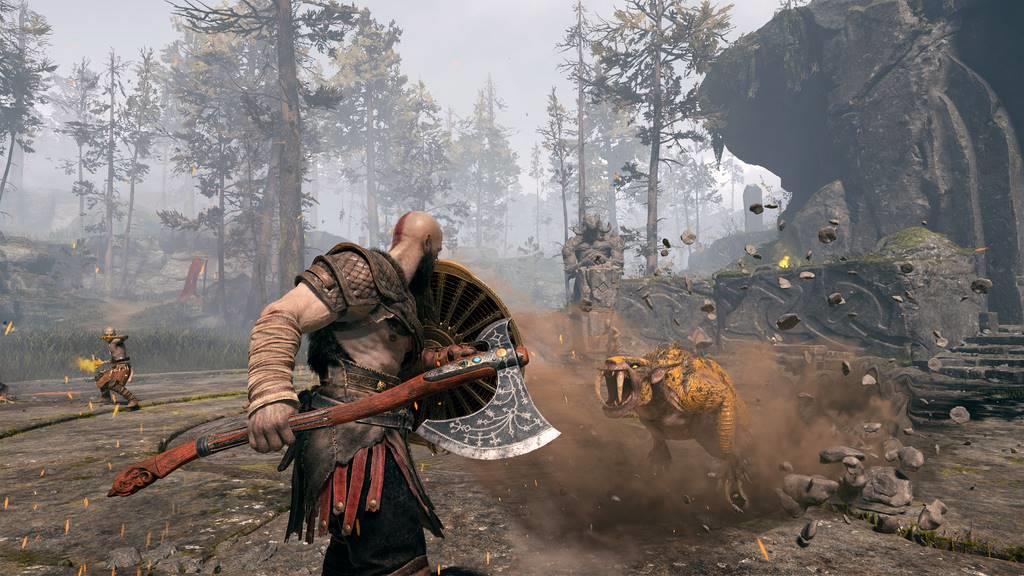 Most importantly, Atreus balances Kratos. Kratos isn’t just full of spit and vinegar, but he’s still an aspirational role model for alpha males everywhere. Atreus brings a thoughtful curiosity to Kratos’s blinders-on focus. The boy possesses imagination where the dad has a narrower vision. Atreus wears his heart on his sleeve. Kratos put plate armor over his.

Along with the zoomed-in character introspection, the camera is much closer now, too. It sometimes has to catch up in a cutscene, like an embedded war journalist running hard to take cover in a firefight. No longer does the viewpoint draw back to take in an entire battle. This makes crowd control more challenging, and makes line-of-sight a more important aspect of battle. You’ll also thank Atreus later when he yells, “Dad, look out!” or, “Incoming fire!” from offscreen threats that are about to land on you.

The fights are hard hitting, though. It’s so good. Kratos’s old chain blades are gone, but his new battle axe takes out enemies like he’s chopping down trees. Every swing hits hard. Every block bounces hard. And every time you throw the axe, it buries itself hard into the enemy—even the big ones that are still walking after taking an axe to the chest. First-person shooters often talk about “gun feel.” Well, the axe feel on God of War is fantastic. 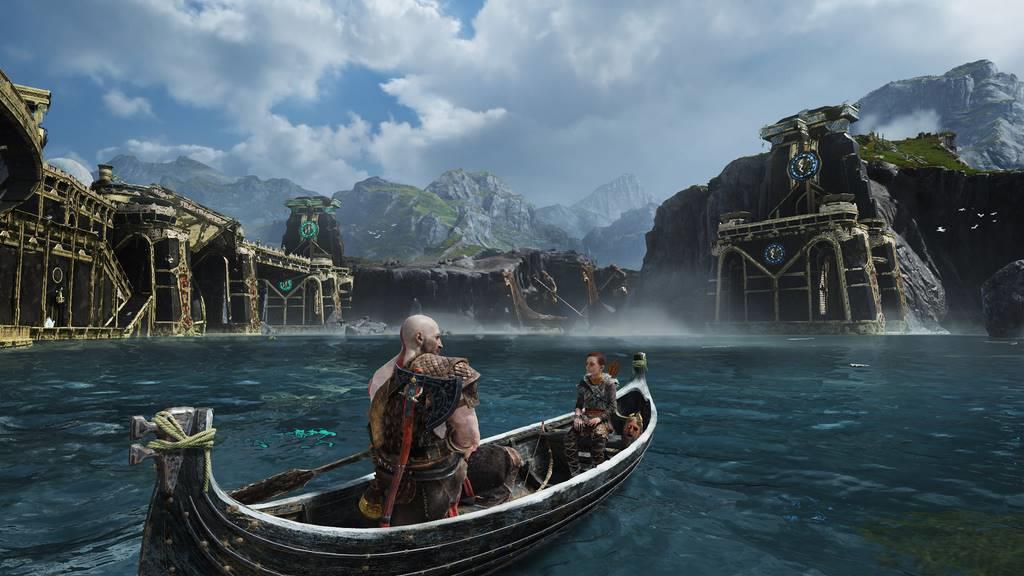 Even in the most complicated of puzzles—which don’t require a Mensa membership to complete, don’t worry—Kratos is always able to solve things with his hands. Well, by smashing things with his hands. Whether he’s roll-dodging gouts of flame or hitting gong-like bells in a particular order with his axe, even the puzzles stay very kinetic, very hard hitting. There are lots of puzzles, but they feel better than ever because solving them can still feel like a fight; just a more surgically implemented fight.

One thing I love most about God of War is how thoughtfully integrated everything is. Whether it’s a puzzle-laden island whose paths twist around themselves like a Bavarian pretzel, or it’s a boat ride across a lake that has father and son discussing whether there are any good gods. But even fast travel is given time and consideration when it comes to integrating it into God of War’s game world. (Hint: there’s a Tree of Life whose roots span both time and space in a lore-building implementation).

God of War is infused with more magic than I’ve seen in a hundred RPGs. One realm is all pink ginko biloba trees, chirruping frogs, and light fighting its way through the darkness. Another realm is rocks and snow and ice that is at once poetic yet altogether daunting. Kratos is a god killer among gods, yet even he can be made small by the immensity of these environments. 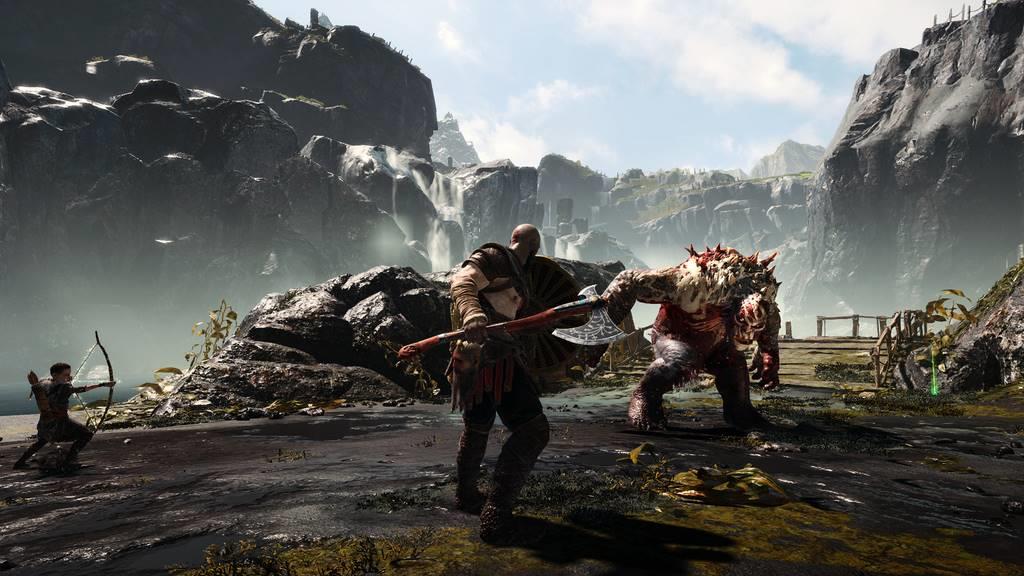 With specific armors and upgrades, Kratos can cultivate a classic Kratos approach to handling things, like wearing boar hide armor to boost strength and defense. Or, with arcane shoulder wraps, he can boost his runic attack cooldowns. Then again, there are items that favor health or even luck (with luck increasing XP and monetary gains). I did a little mixing and matching, sometimes satisfying a functional need, other times satisfying a “this looks too cool to pass up” need.

It’s a painfully sobering moment in Kratos’s work week when it dawns on him how wrong he can be, and how often he can be wrong. Kratos calling out his boy for being impatient. Atreus calling out his dad for being callous. It's often Kratos’s unwavering determination versus Atreus’s stirring curiosity. To bring closure to their quest, they’ll need both perspectives.

There was a real danger, when it came to the art and aesthetic, to have made this look like The Elder God of War Scrolls: Kratos in Skyrim Edition. But Santa Monica Studio did the opposite and to stunning effect. They’ve created a sufficiently advanced magic that is indistinguishable from technology (to bastardize a saying). Plus, God of War never shies from spectacle. In the case of “go big or go home,” Kratos can never go home again.

This God of War game stands on its own. It’s beautiful. It’s savage. And it even gets real as I re-examine my own parenting tactics. You might not have a kid. But don’t let that scare you. You’ve definitely been a kid. And seeing how this father-son dynamic plays out with a Norse mythology backdrop—you know, like in real life—is a thoughtful conversation punctuated with axe and arrow wounds.

This is a skull-smashing story about making mistakes and taking responsibility. While hacking and slashing their enemies, a father and son build bonds of love and loyalty. God of War is a minor masterpiece.