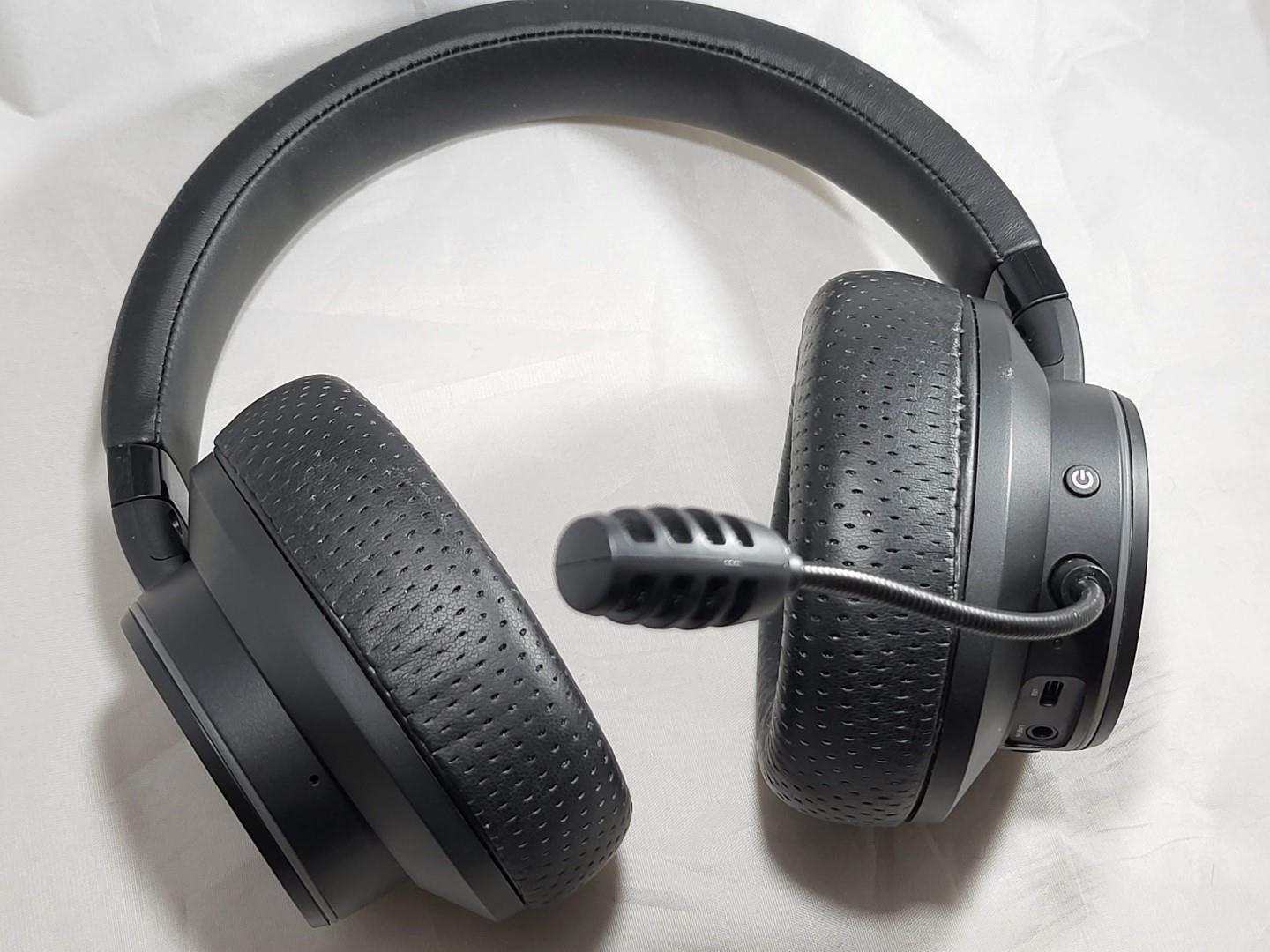 Creative has been producing a good deal of SFXI audio products for a few years now, and they’ve implemented the feature in a few of their gamer products. Today, we’re going to look at their latest gamer centric headset, the SFXI Air Gamer, which is a hybrid type headset. What do I mean by hybrid? Well, let’s dig a little deeper.

The Creative SFXI Air Gamer’s physical design is pretty much the same as the SFXI Gamer, which I've used for quite some time. With RGB rings on the outer shell, removable Commander mic, plush leatherette ear cups and a wide headband, the SFXI Air Gamer is quite similar to the SFXI Gamer with some new additions. 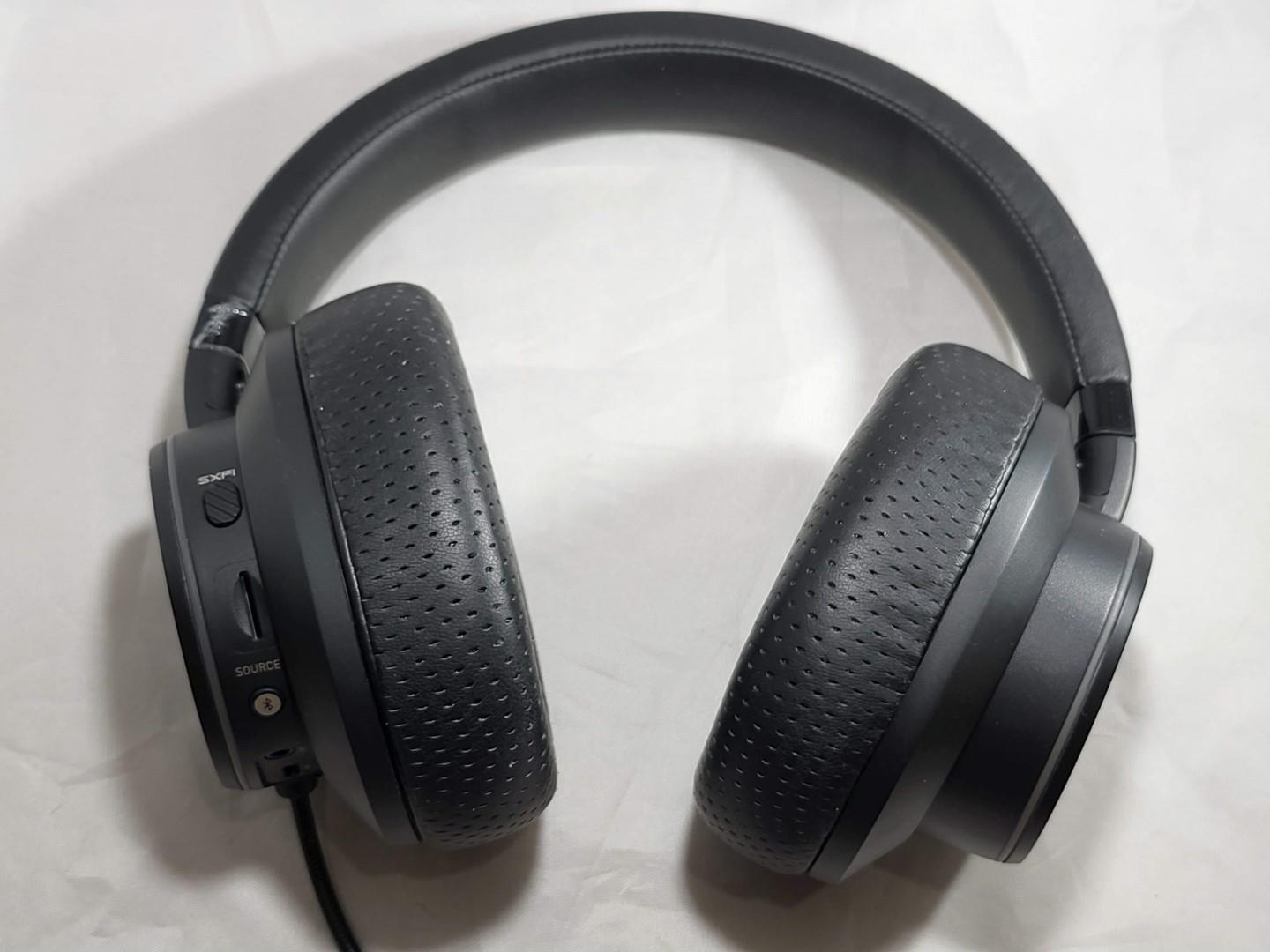 Let’s start with the changes. First up, we have touch controls on the left ear cup. You can do the usual media controls by various touch and sliding motions such as volume control, pausing, and skipping tracks. Not only can you control your music should you be paired up with a phone, but you can control some media websites like YouTube on the computer. Swiping and using the touch sensitive controls was actually easily done, although I wish there was some prompt to let me know when I am doing something like increasing the volume. I had to look at the volume slider on my computer to see that it was actually doing something. Some audio cue would have been nice for this one.

The volume touch control replaces the dial that’s in the SFXI Gamer that I used a ton. With that, I did like the tactile feel of adjusting the volume on the headset as you can have some fine control with it. With the touch controls, they increase or decrease in set amounts which I found to not less precise than the dial. 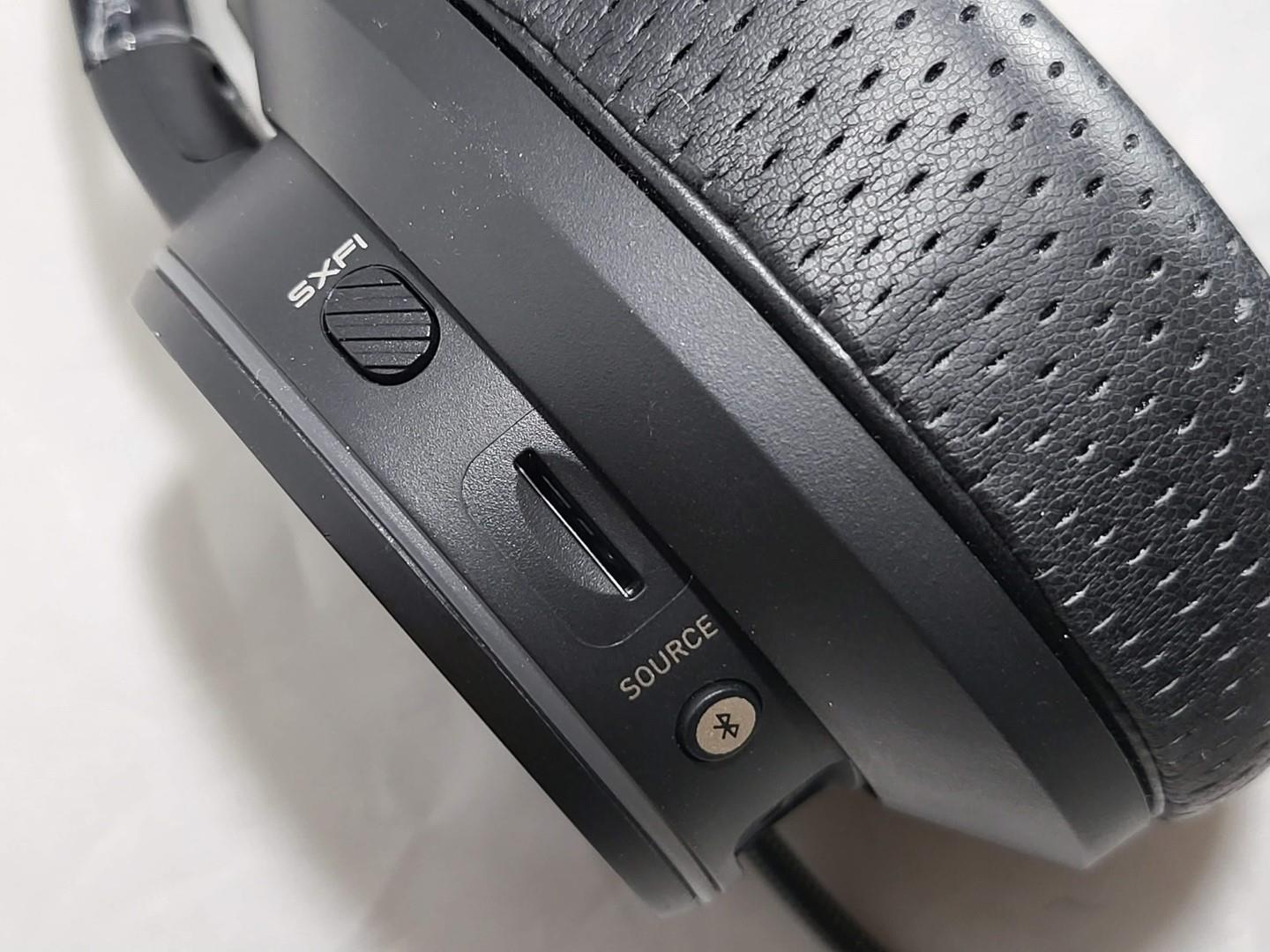 On the back of the left ear cup is a microSD slot that will let you go completely connectionless if you want to listen to music. Just save all the songs you want on the card and you can unplug the SFXI Air Gamer and enjoy the music playing from the removable storage option. It’s not a bad little feature, but I feel like most people these days would stream off their phone since this headset has Bluetooth capability. Also, I ran into a minor problem with the microSD card slot when switching sources as when it would cycle to the microSD slot, it would sometimes just repeat saying it can’t skip tracks. It didn’t happen all the time, and it only took me a few presses of the source button to get by it, but it happened frequently enough to be a little bit annoying.

The SFXI Air Gamer has Bluetooth connectivity, allowing you to pair with a phone or even a PC. Pairing with a phone allows you to take a call on it even if you are using it with your computer in USB mode. It’s actually convenient for those who don’t want to take their headphones off to talk on the phone. Just press a button to answer and it’ll automatically switch. Easy-peazy. Unfortunately, this headset doesn’t support aptX low latency so if you wanted to use it with your PC to game via Bluetooth, you’ll get a slight (but noticeable) lag. Using Creative’s BT-W3 to test, the indicator cycled through the basic codecs that most Bluetooth headsets support, but no low latency mode. It’s too bad as they do have some headsets with aptX Low Latency in their lineup and I was hoping they’d include it in something like this which is branded for gamers, but I think Creative wanted the audience to focus on wired mode for that since you can’t use a microphone when in aptX Low Latency. 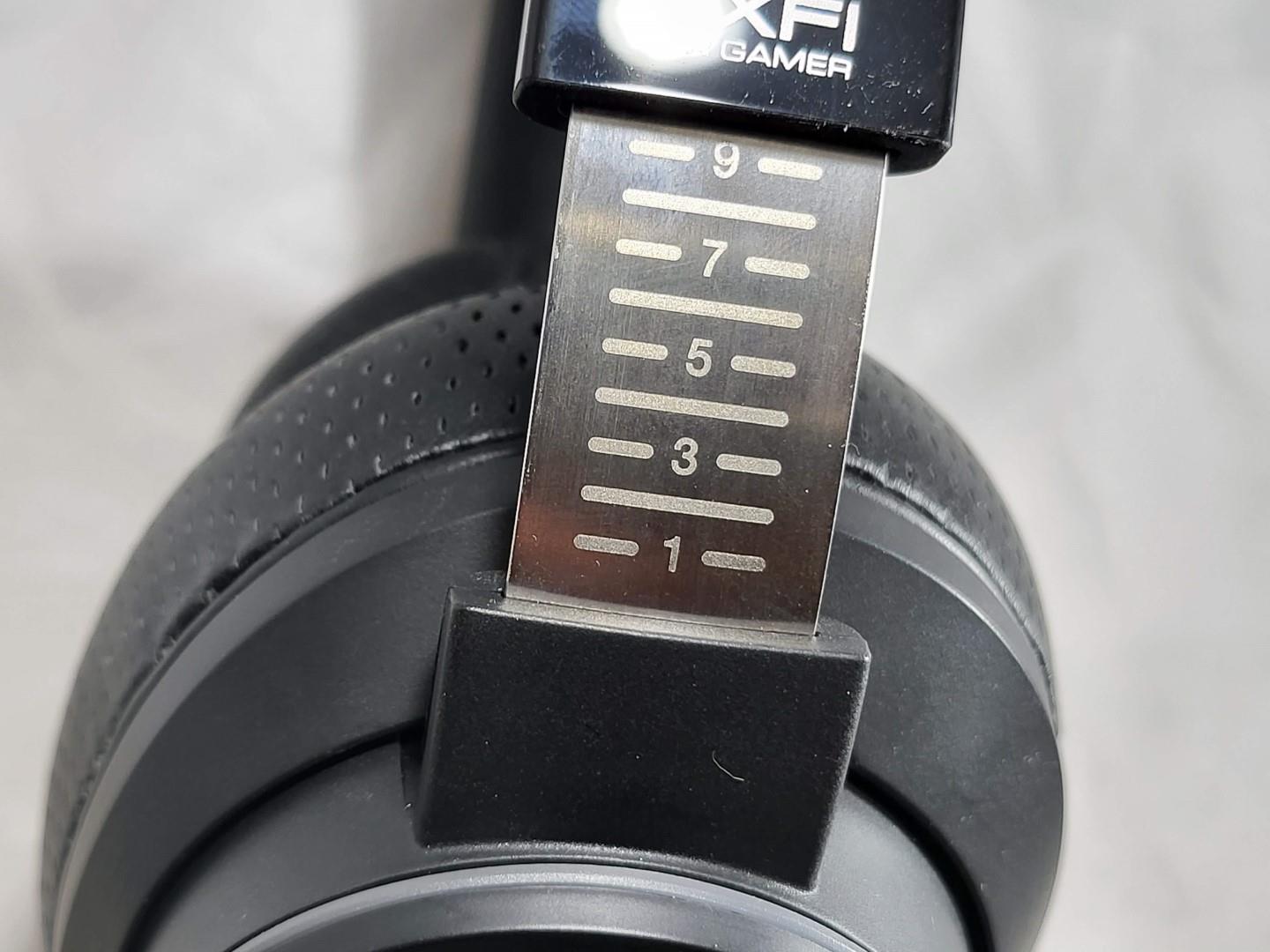 Bluetooth mode also allows you to take the Creative SFXI Air Gamer on the go and use them to listen to audio from music or video on your phone. The battery lasts about 8 hours or so giving you a work day’s worth of sound. If you’re wanting to consolidate the headphones you have, the SFXI AIr Gamer’s ability to operate as a normal set of headphones with the ability to let you answer calls does an OK job of this. You can easily come home, plug them into your PC, and continue using them on the computer after using them on the go.

The Creative SFXI Air Gamer actually comes with two microphones. Installed out of the box is a smaller nub-like mic and the CommanderMic, which is really great for talking with others as it delivers a solid voice and has an embedded pop filter, If you read my review of the SFXI Gamer, you’ll see that I really dug the CommanderMic’s quality. The smaller mic isn’t something to scoff at either. While it doesn’t sound nearly as good as the CommanderMic, it does do a solid job for situations such as a Zoom meeting. It does pick up more of the environment so if you are in a place where that’s a lot of background noise, it’s best if you use the CommanderMic.  If you don’t want a long mic extended out and still want to talk to your friends or coworkers, the smaller mic will do. And yes, there’s a slight side tone with the SFXI Air Gamer, just like the SFXI Gamer, so you can hear your own voice and it’s not something you can adjust or turn off. I’m hoping Creative comes out with a software solution to adjust this, but seeing as the SFXI Gamer doesn’t have that and that’s been out a while, I don’t foresee something coming for the SFXI Air Gamer to adjust the side tone. 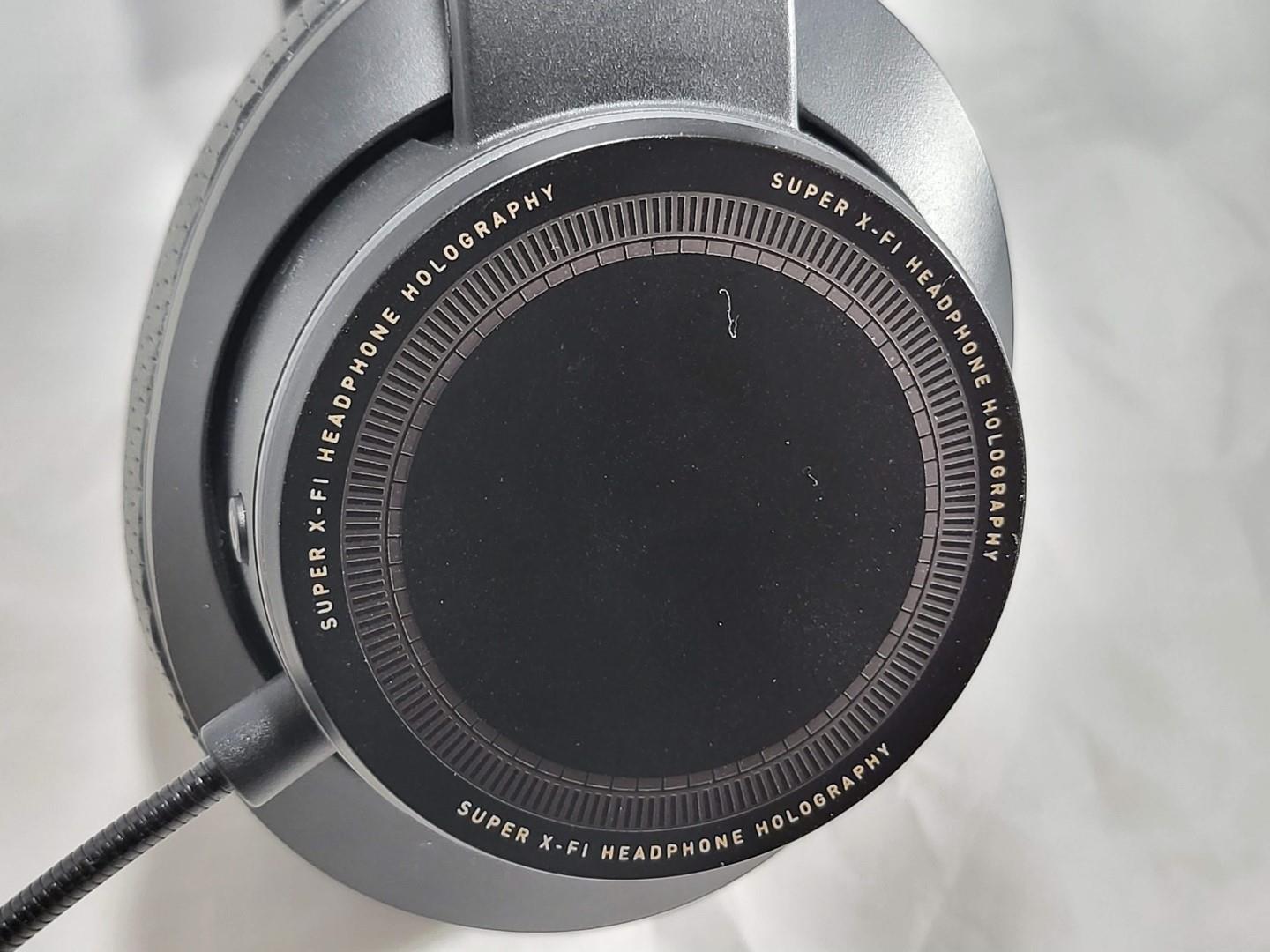 Super X-Fi in the SFXI Air Gamer works a lot better than Creative’s Outlier Air V2’s as you don’t have to use their app to listen to media in order to experience Super X-Fi. All the settings are saved and activated on the headset so you can pull up a YouTube video or watch a movie on Disney+ or Amazon Prime and experience the glorious expansive audio that Super X-Fi can deliver. Depending on the type of media, Super X-Fi can really enhance what you’re listening to but it can also make something sound a little too artificial. It really does depend on the media, but when it works well, it works damn well. We’ve covered a ton of Super X-Fi products here when I visited Creative at CES so I won’t go too much into it, but there’s a reason Creative’s really pushing this tech on a lot of their devices as it can be that damn good.

The pleather cups, unlike the SFXI Gamer, have small holes in them to help with breathing. Even during long sessions, I didn’t find them to be uncomfortable nor did I get too hot in them. The sizes of each ear cup just about cover my ear but I can see people with slightly larger ears might find it a little annoying. You can easily replace the ear cups should they get worn out as a slight twist and pull will detach them from the headset. 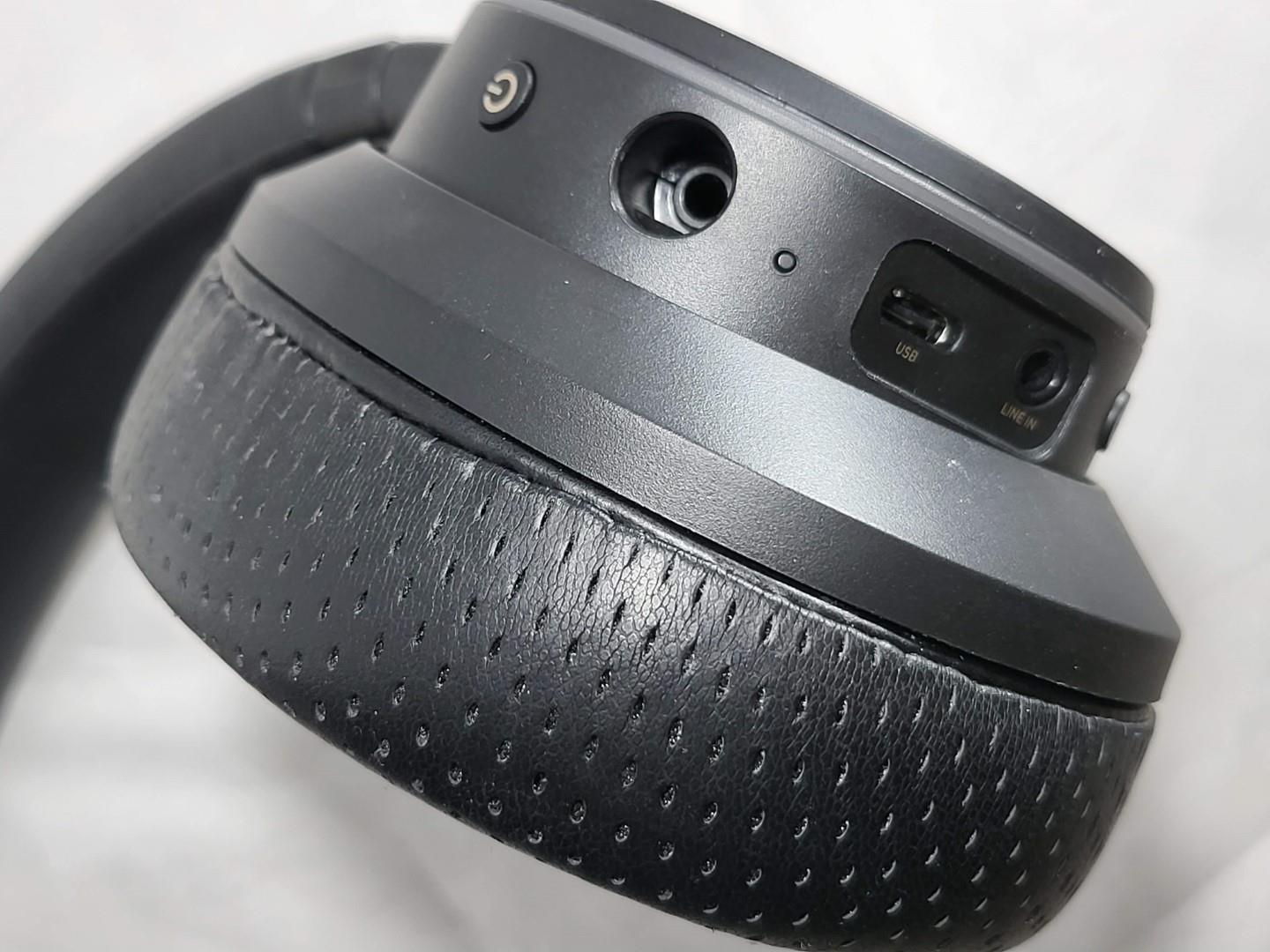 The headband is wide and has some nice number etchings on the side for those who want to know where their band is adjusted to. It’s not as padded as some other headsets but I didn’t find it uncomfortable when wearing. It feels strong and while I could twist it and bend it out with a good amount of strength, it doesn’t seem like it would break.

Like the SFXI Gamer, you connect the SFXI Air Gamer to your PC via a USB-C connection. If you don’t have one on your computer, Creative supplies a USB-C to USB-A dongle. The cable feels like it has a strong rubber wrapping on it and it doesn’t seem to be prone to tangling as much as the cable in the SFXI Game, which is braided. The SFXI Air Gamer also works with consoles whether it’s using the USB connection with the PlayStation or Nintendo Switch as well as Xbox consoles using the 3.5mm cable. You’re not stuck with using this on the computer or phone so it does add some versatility to the headset.

There’s an app for the PC that will let you adjust things such as EQ and the RGB on the SFXI Air Gamer. There are limited RGB settings, so don’t expect to go all fancy with lighting effects. You’ll need to use the phone app to take a picture of your ear for Super X-Fi and it helps to have someone else do it for you rather than trying to do it yourself. The phone app lets you also adjust the EQ, but not the RGB so for some operations, you’ll need to use the PC app.

Sound-wise, the SFXI Air Gamer seems to be on par with the SFXI Gamer meaning that they are good in all areas, but don’t excel in one. The mids and highs are good with bass that’s not overpowering. Thankfully, you have the EQ to really dial this into your liking and there are a few things I did to make it sound more pleasing to me in both games and music. I’ve been using the SFXI Air Gamer for a month now as my main headset and I can say I’ve been pretty happy with the audio quality and haven’t had the urge to switch to anything else. Gaming audio is good and music is solid as well. 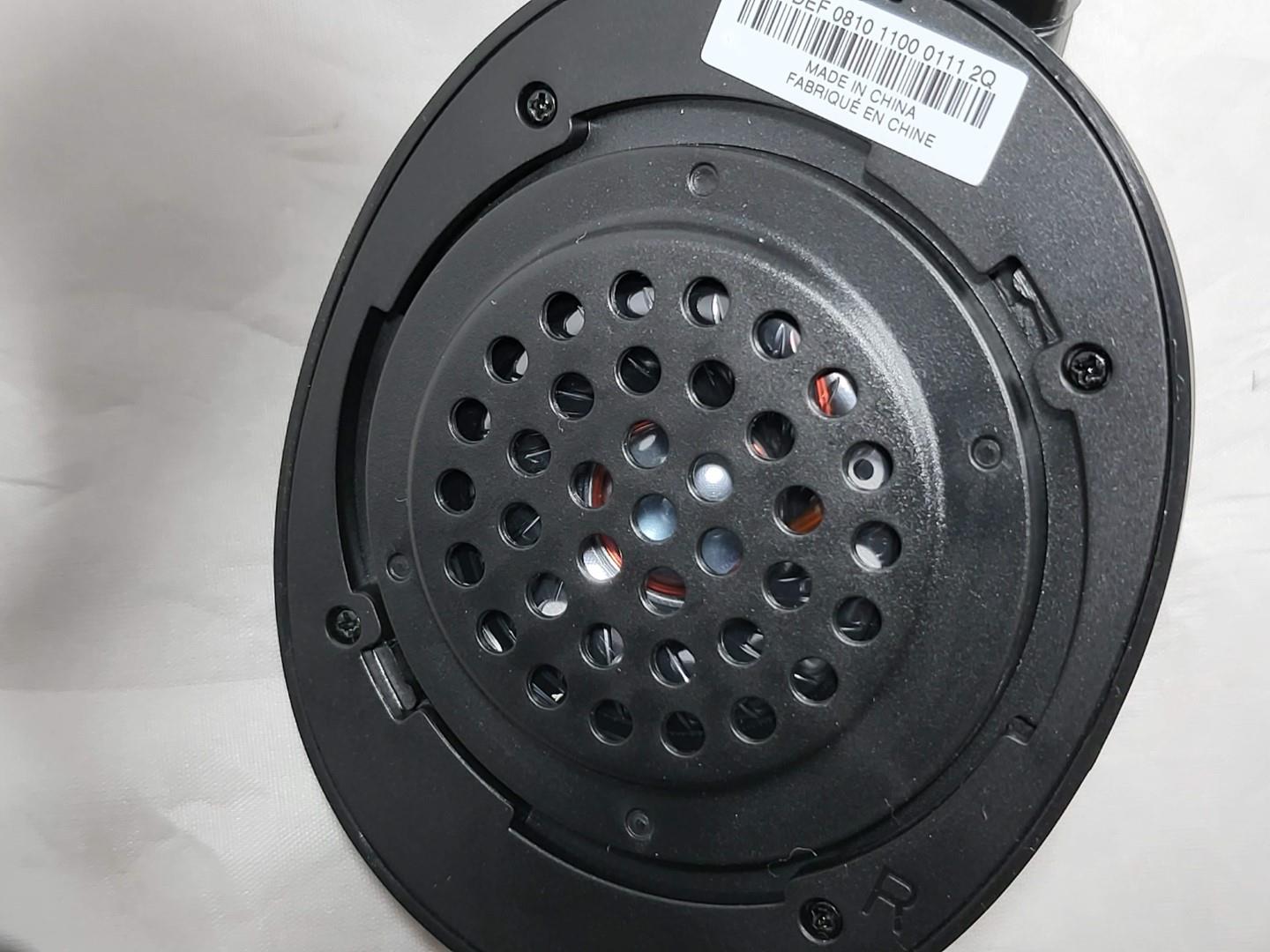 And for gamers, there’s Battlemode which utilizes the Super X-Fi technology to boost certain game sounds such as gun fire and footsteps. In previous reviews, I tested this on games such as Call of Duty and 7 Days to Die. I really liked it in 7 Days to Die as it enhanced the sound of zombies sneaking up on me or around me. It’s not a mode that I use on all games, but you might find it useful for some to enhance the sounds of certain games.

$149.99 is the price of the SFXI Air Gamer, which is only $20 more than what the SFXI Gamer was at launch. Given the added ability to use it wirelessly with your mobile device and inclusion of a microSD card slot, that’s a pretty good price when compared to the SFXI Gamer.

As a gamer headset, the SFXI Air Gamer does a good job and having the ability to use it via Bluetooth with your phone is a nice plus. Good sound and good features, the SFXI AIr Game is a nice upgrade over the SFXI Gamer.