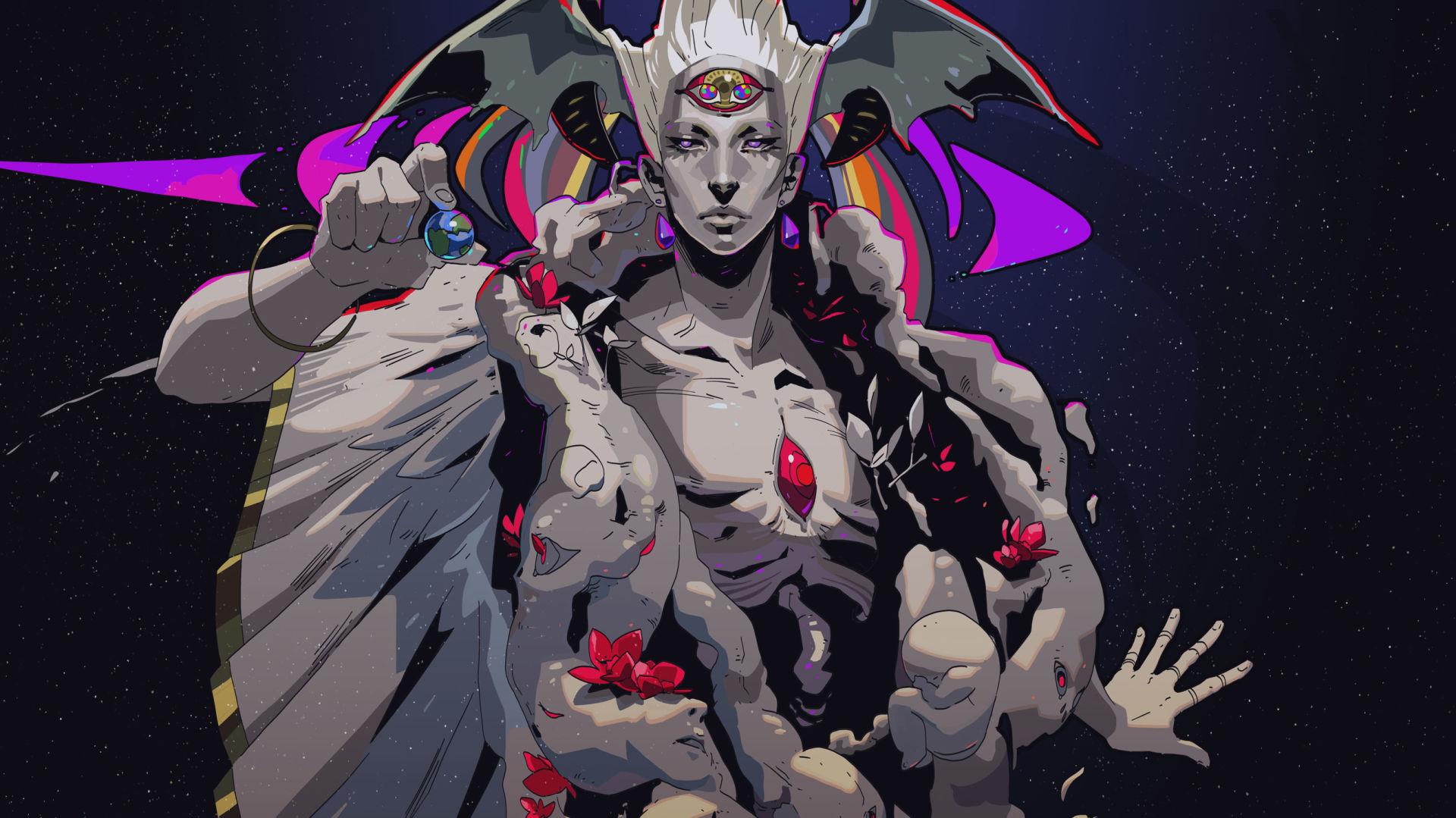 So a funny thing happened on my way to playing Hades. Ignorant of Hades' very existence (despite it already being well-established as a PC game), I had Curse of the Dead Gods land on my review plate, and loved it. But after submitting my review, my score of 9 landed it a step above the MetaCritic average of 78. Digging into why, one refrain kept popping up: "It wasn't as good as Hades."

Desperate to experience this allegedly superior product for myself, I jumped at the chance to dive in once last year's PC release finally made this present jump to consoles. So what was it about this action roguelike that made it so much better? What lightning did it catch in a bottle to garner so many game of the year awards? Apparently, that lightning was a gift from Zeus himself—because damn, this game is so, so good. 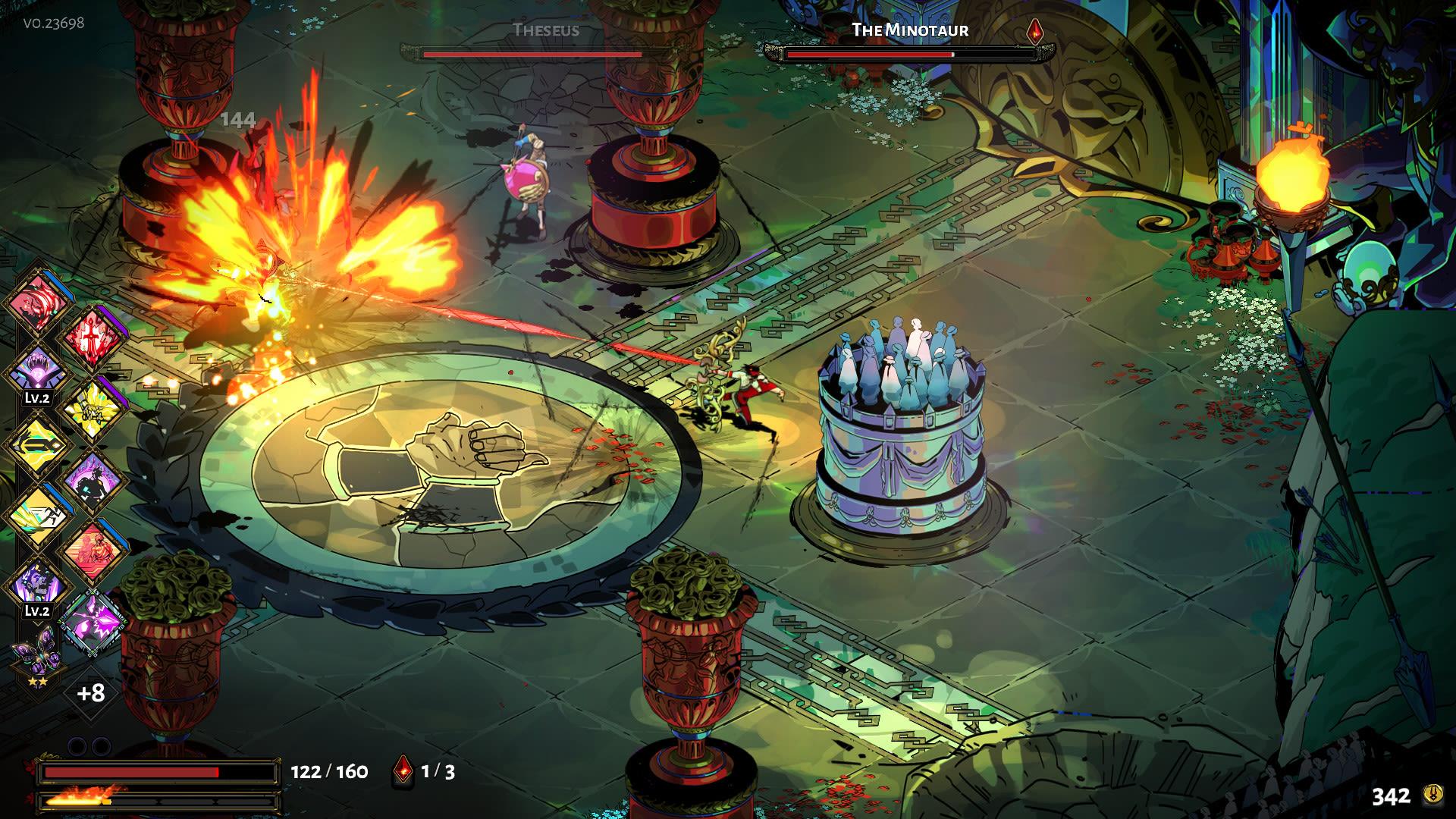 Let's start with the comparison, if only briefly. Each is an action roguelike. Each has the typical gameplay loop of making runs through gauntlets of randomly generated maps. It rewards your attempts to reach the end boss. And, continuing the run, you slowly gain strength and powers to tackle future challenges. Curse of the Dead Gods is a little deeper with its in-run power-ups (or curses in the case of Dead Gods vs. Hades' boons of gifts from Greek deities). Curse of the Dead Gods has some extremely clever elements, like the use of the torch and balancing light and dark. It's significantly more challenging in its combat, both with the seemingly greater arsenal of weapons at your disposal to master. And the straight-up harder minions on the way to the end bosses.

Most Hades runs end at a boss level, while most Dead Gods runs end, well, anywhere that your life meter eventually whittles down. On the other side, Hades is better at...literally everything else. And not just better than Dead Gods. When it comes to world building, storytelling, humor, presentation, polish, and full-on gameplay addiction, it's better than most every other game in your library. Hades is masterfully crafted and an incredible overall experience. 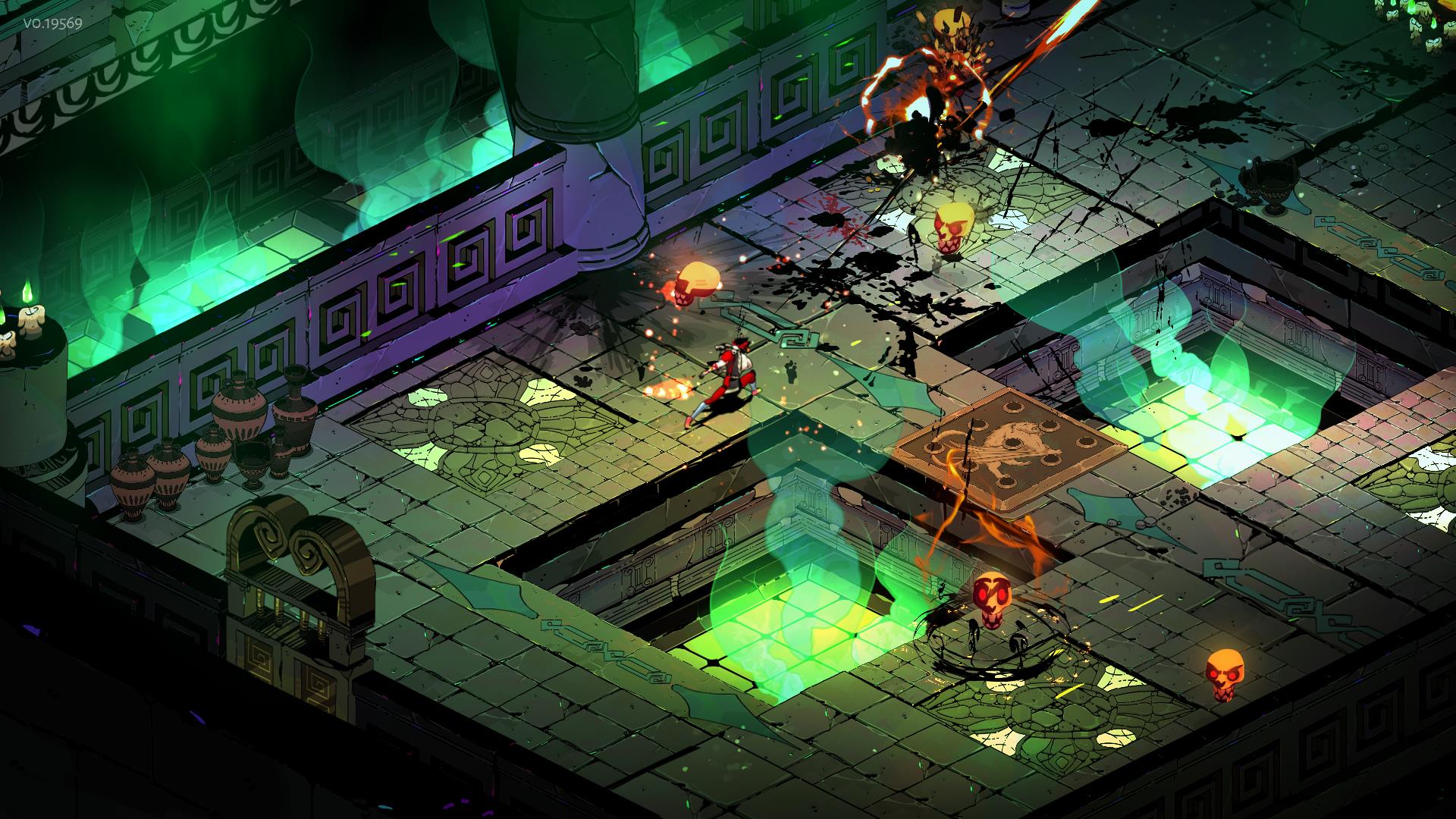 Because you see, even those points I would want to give Dead Gods for depth and challenge, I'm not even sure Hades is worse off without them. Hades does such a good job of not only weaving the endless retry mechanic into the very lore of the story itself, but also rewards you for each failure by eking out that much more of the story—told primarily in the lens of managing your relationships with the many mythical NPCs that grace the underworld.

It slowly reveals more and more of the interpersonal dynamics amongst gods and their children. Fail a run, get some more enjoyable dialogue and a chance to spend some currency earned in your last one on some new starting powers before your next attempt. It's a fabulous cycle, and the end result is pure pleasure. I'm not bogged down on any given run by steep difficulty curves, and not annoyed when one ends. I'm eager to jump into the next after fishing out another reward moving the narrative forward that little bit more. 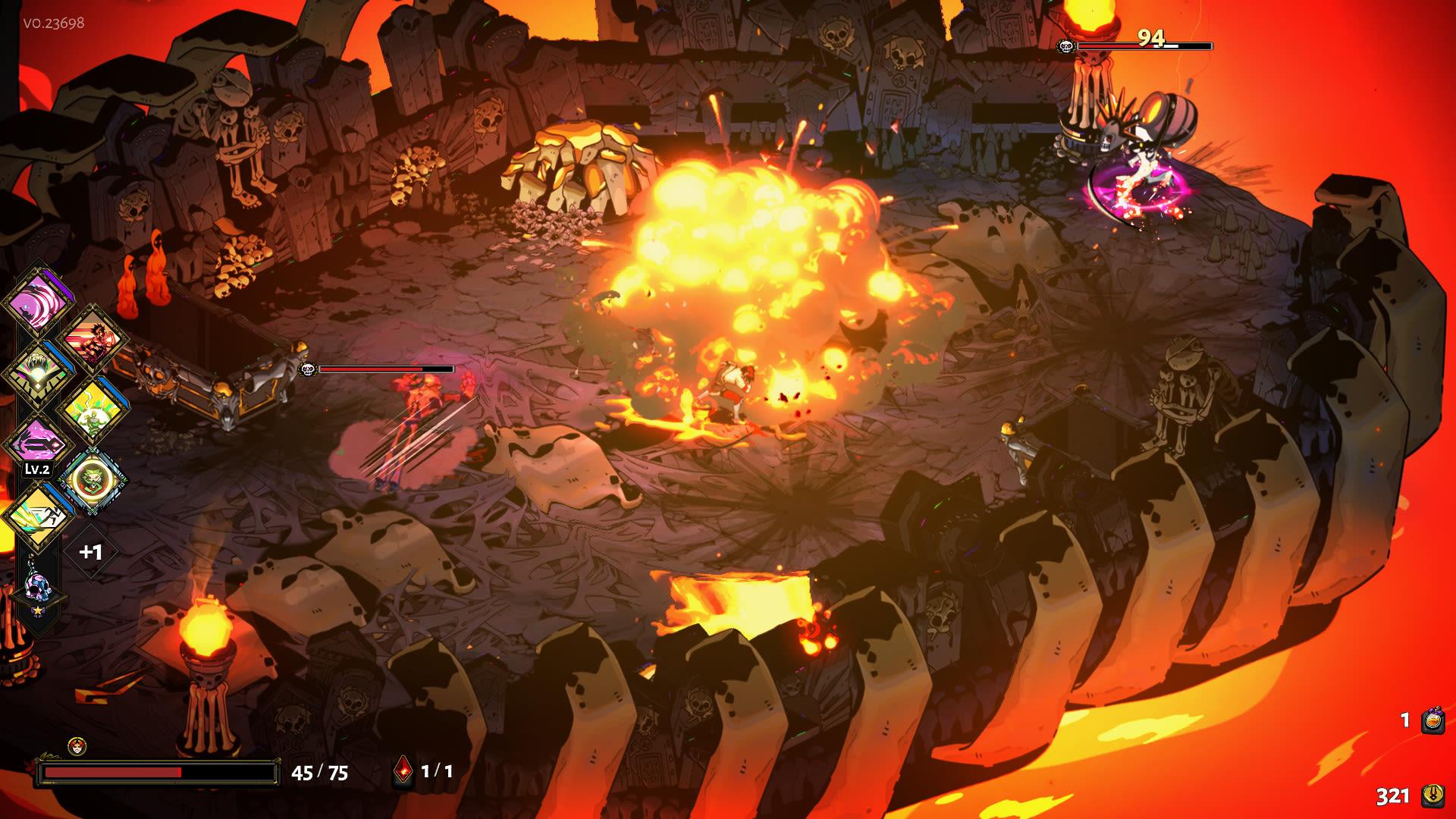 And the presentation of it all is spot on. Some of the non-gameplay trailers and animations just don't do the gameplay justice. This world of Hades is what would happen if Studio Ghibli started making games and transported them from Japan to the Greek underworld. The voice acting is on point, following well-written scripts, and embedded with humor and style. The storytelling as a whole somehow manages to pull off a wonderful little chronicle with just a dialogue snippet at a time in a genre where narrative is almost always overlooked, if not entirely absent.

Even if the combat isn't the most artful to master, the storytelling more than makes up for that by shifting much of that weight onto the shoulders of the way the epic is measured out an interaction at a time, as if unfolded by a raconteur. Even if the bosses represent a difficulty spike the minions never match on the way to their lair, the mechanics to best both remain consistent and fair. It shifts the focus squarely onto that path of loot and building your character for this run to overcome that fearsome obstacle that you know is looming. 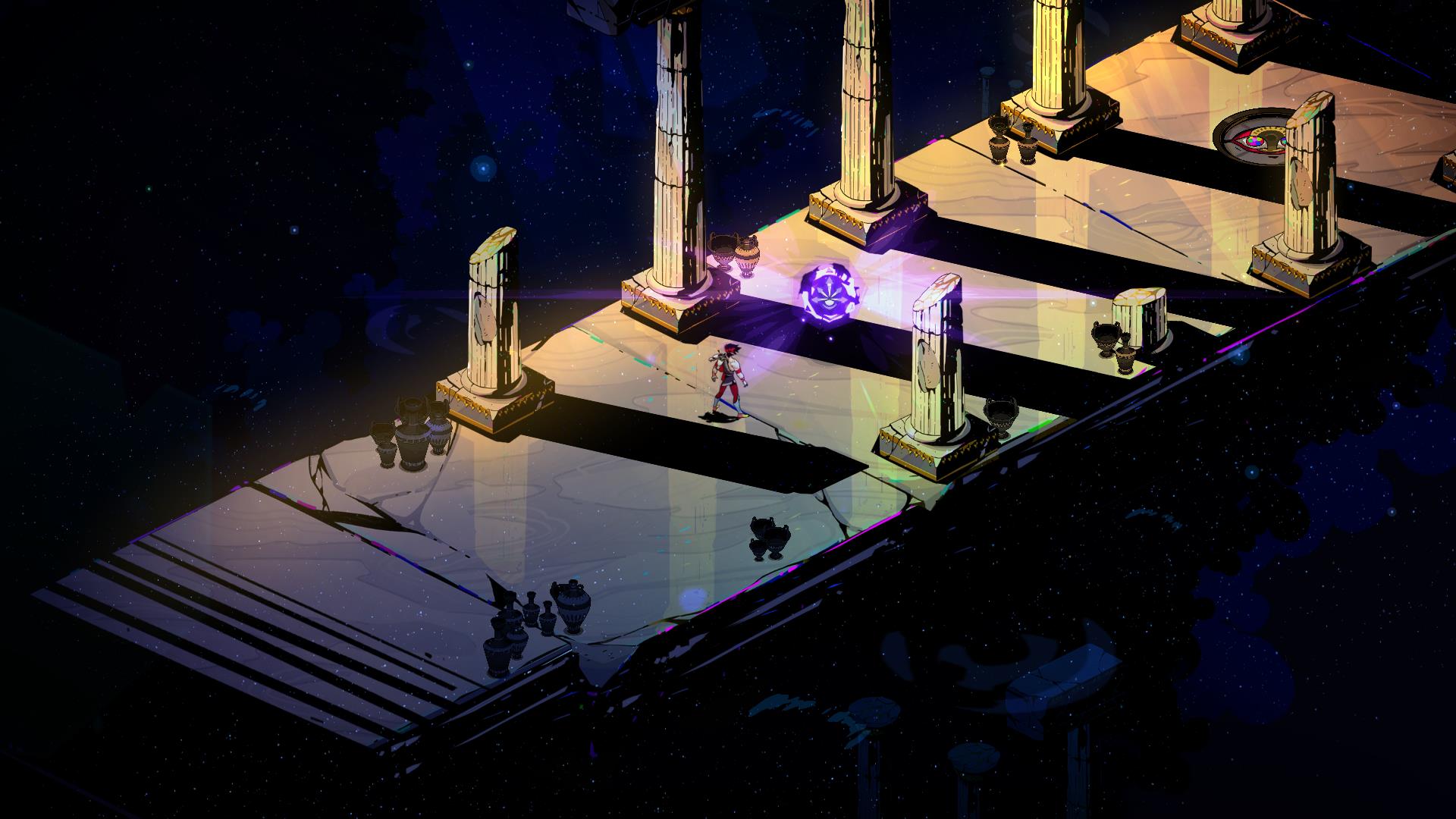 There is no overarching map of the total path to the end like most games of this ilk employ, instead just giving you a choice of doors upon completing each room. Again, this seeming lack of detail that seems to becoming the norm of other games and their presentation, in the hands of Hades is less a detriment and more just another proof point to pin the game loop away from the grand strategy and into the here and now of following the flow of the run.

Embrace the carefree nonchalance of your hero, Zagreus, and just enjoy the ride. And if Megaera happen to slay you and cut short your progress again, embrace Zagreus' very words, "Damn you, Meg," and step out together with your hero to try anew. The game excels at the rare feat of turning its own weakness into strength. And there is depth there, don't get me wrong. Hades might not be as deep in one area or another as some others in the field, but it's no slouch. There are a handful of currencies to collect to build out your starting upgrades, a pantheon of Gods to offer more in each run, a host of NPCs to interact with and be entertained by, scores of enemies, and a half dozen primary weapons that are each so unique in their primary and special attacks that they represent six distinct play styles, not just six shades of a singular combat mechanic. 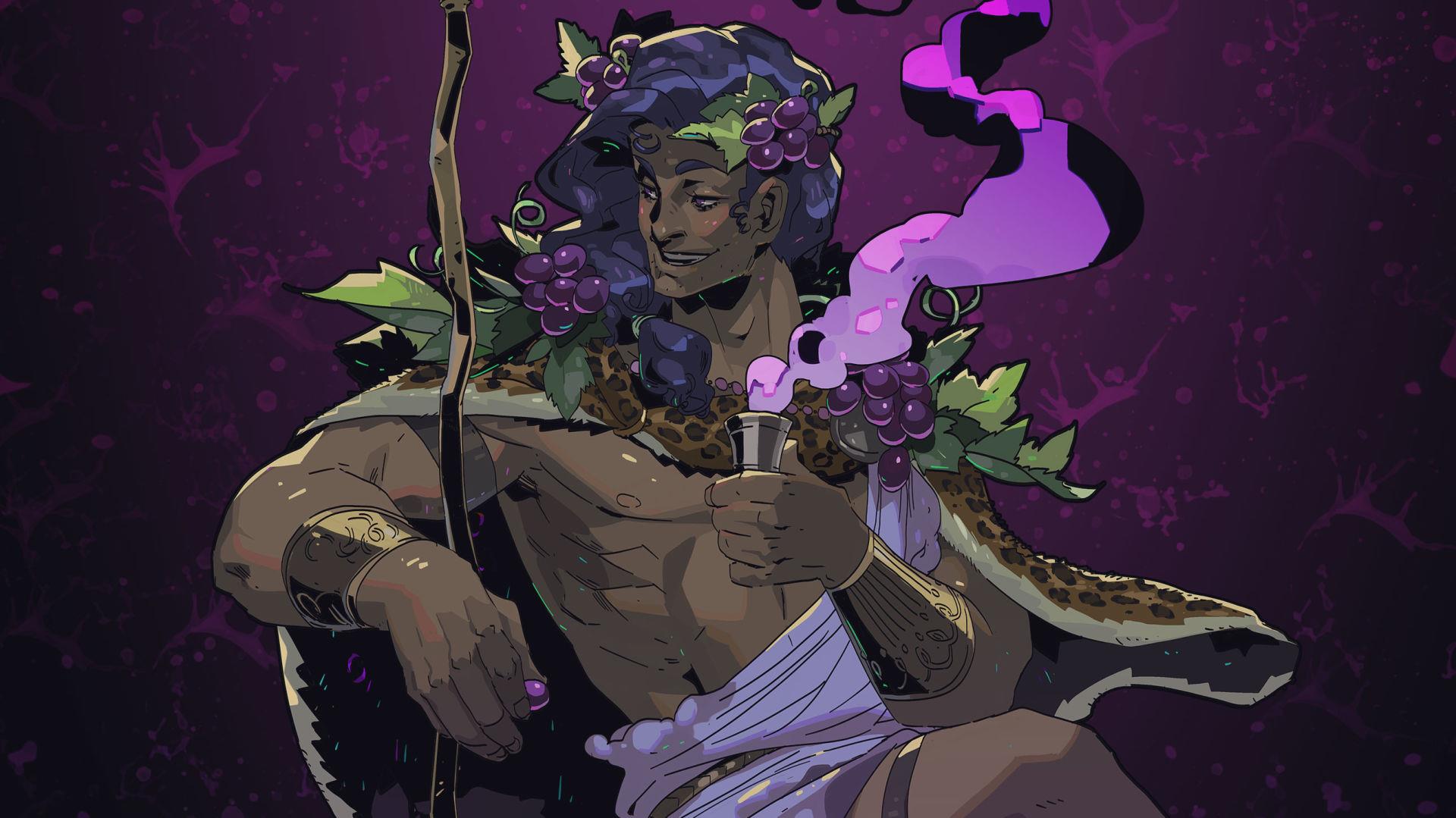 It's a beautiful game. And although I played primarily on PS5 I did open up my PS4 for a singular run and couldn't say the experience was any bit inferior, even if it wasn't in 4K at 60 FPS like on the next-gen system. It's a game for any system: PC, Switch, Xboxes, or PlayStations. It's deep enough to give you so many ways to rerun the randomly generated maps of rooms, easy enough to pick up and enjoy straightaway, and so well-crafted as to entice you to keep aspiring run after run despite your failures.

I stand by my review of Curse of the Dead Gods. It's an excellent game well deserving of a 9. But if that's true, then yeah, Hades is even that little bit better. Even my one criticism, that Hades maybe isn't quite as deep in combat, I can't be sure if changing that would actually improve the overall experience. When the playing experience is such a joy, when the storytelling grabs center stage, who's to even say that more depth or more difficulty would actually enhance that? Hades is a game that will deservingly be listed in every "best of" list for the action roguelike genre. It's a seminal entry into the field. It's a 10.

Action roguelikes is a genre seeing a bit of a surge of new entires lately, and Hades is as good or better as anything you will find in that field. It offers an overall experience in storytelling and gameplay that is top-notch regardless of genre. It's this incredibly unique type of game and play loop that turns your every failure and death into a reward of unlocking more story, injecting more humor, and inviting you to take a stab at one more run. It's won numerous game of the year awards on PC, and there is no reason for those accolades to stop with the port to consoles. Just don't forget to give Cerebus a pet on your way to the next run.