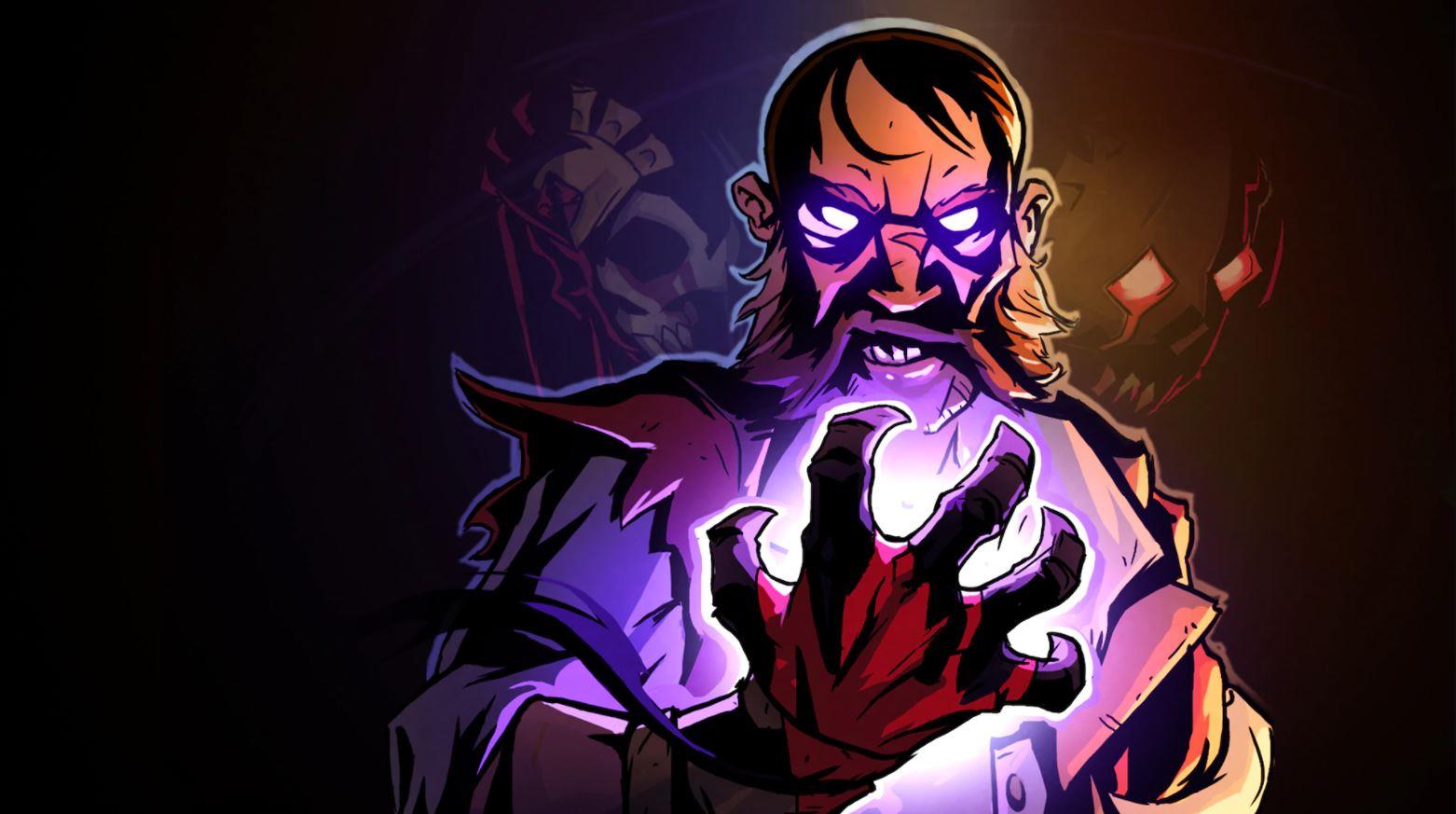 Curse of the Dead Gods

The roguelike is a genre of video games based on the 1980 Unix-based dungeon crawler Rogue, boasting random map generation, permadeath, and the replayability of unique paths on every run. The genre has evolved somewhat, but the core remains fairly consistent with that original formula. The primary appeal tends to drive from that idea that every run is different. The best games in the field also understand that every death, while permanent, need not be soul-crushing. You can always hop back in for one more run before you're ready to quit. 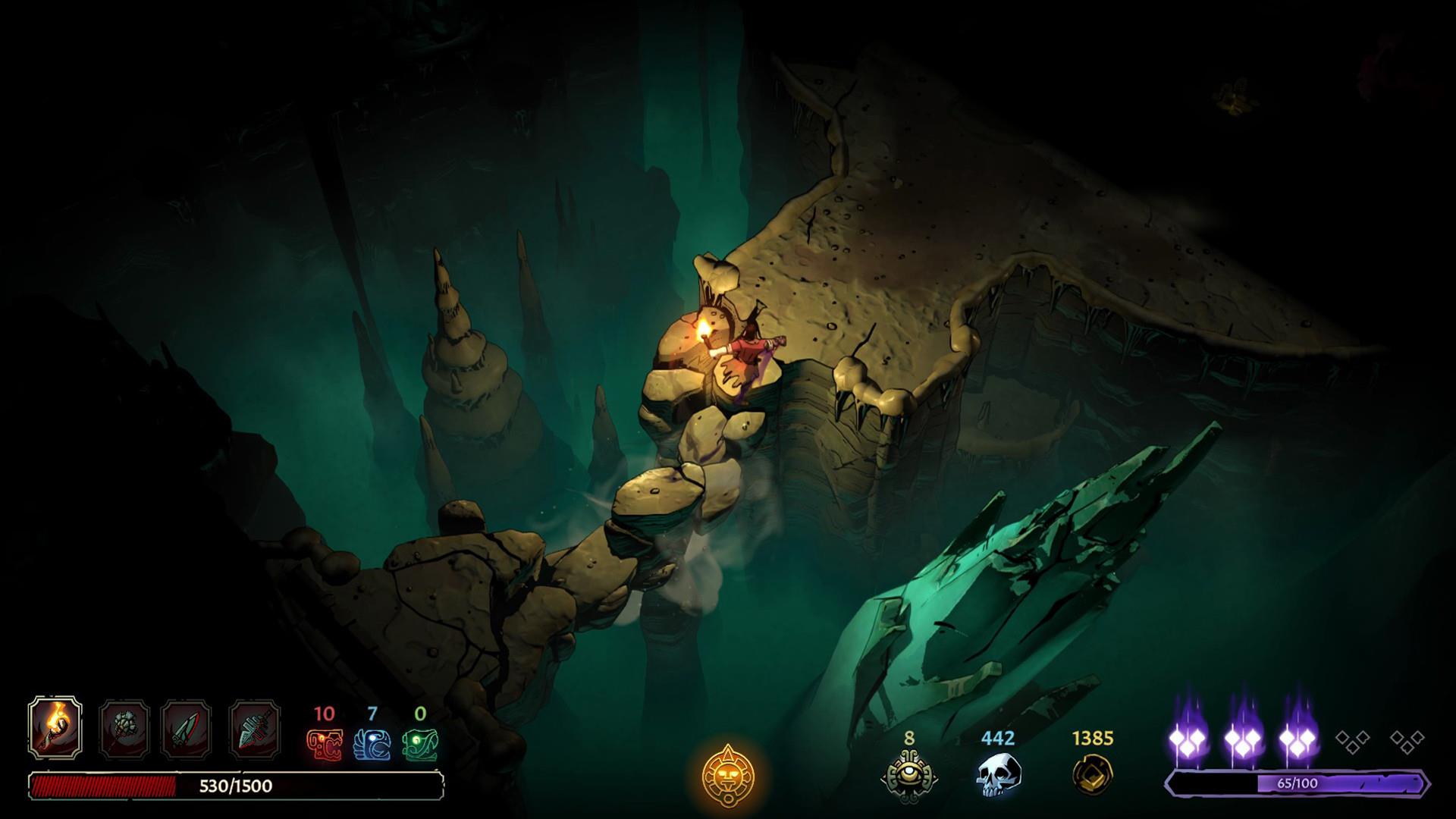 Curse of the Dead Gods embraces the best parts of the roguelike and delivers a fantastic gameplay experience. The core gameplay loop is the temple run. The temple is a cursed place, but each run feels like anything but a curse. My runs typically lasted under 20 minutes, because a lot of them ended before the final boss anyway. So the game can be played in well-paced chunks of progression. And progression was on hand, because even those failures meted out a reward. Roguelike purists might scoff at the notion, but I found this mechanic only to be to the game's credit.

There are a few types of currency to be gained from runs, successful or not. Unsuccessful runs typically only give the least valuable reward: the blue skulls you collect on the way. However, successful runs where you meet the boss in the final room and best them yield more valuable currencies. These currencies can be spent on upgrades, blessings, and favors. Upgrades give you a chance at better starting gear, still doled out by random number generation, but more opportunities for a good set of weapons. Blessings give you starting bonus like increased health or gold. Favors allow you to re-roll weapon shrines on your run to improve your chances of getting beefier tools or just items that synergies better with what you've already collected. This is one of the better aspects of the game in my opinion, because it not only respects your skill in actually completing the run, but also respects the time you put in even when you fall short of the final boss. 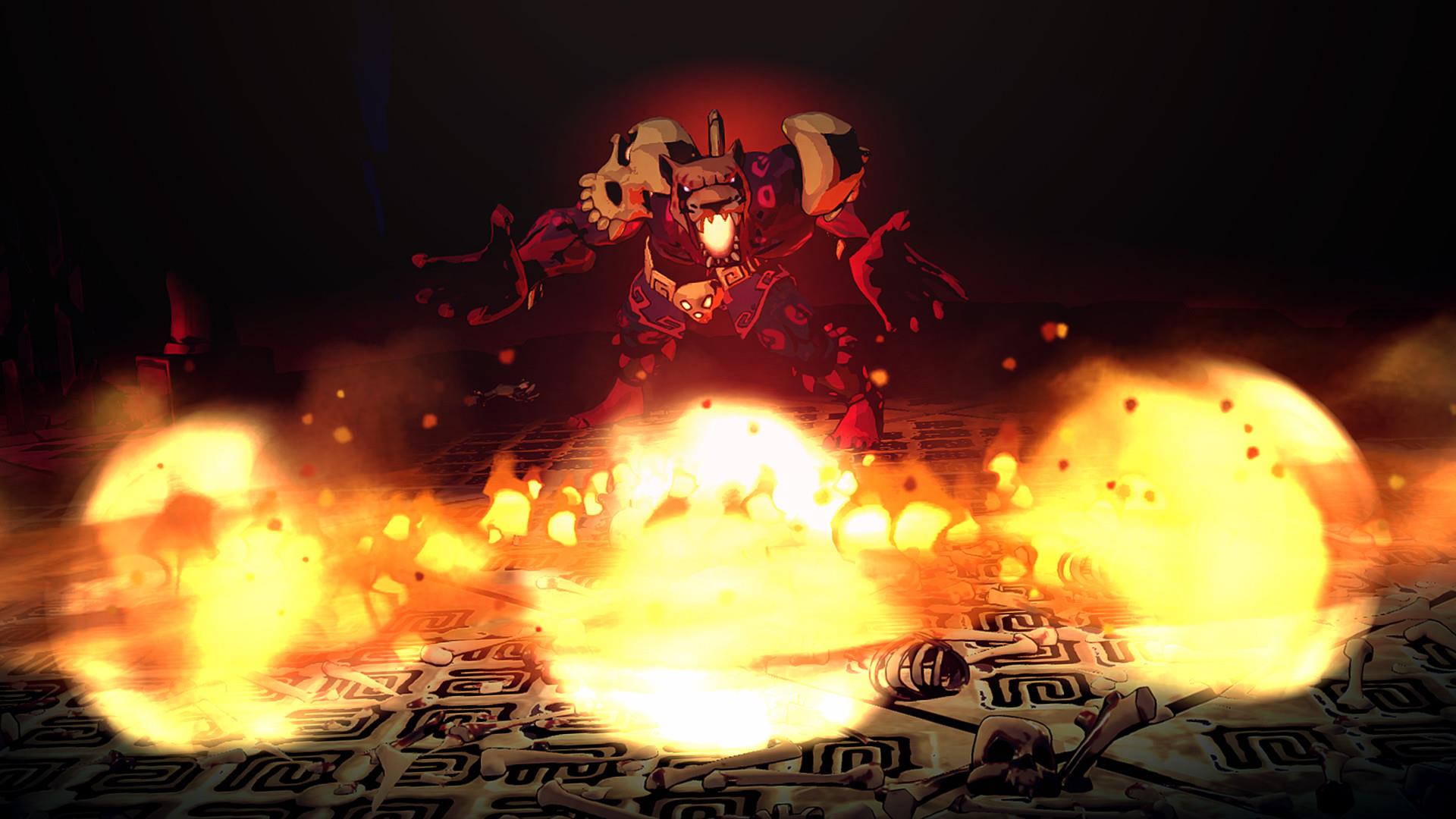 Ultimately, though, in-game skills still levy the greatest rewards. Combat is not overly complex but requires patience and timing to master (I never did). However, the moments I did execute more carefully timed attacks the benefits were obvious. You start with a melee and secondary weapon, often ranged. Along the way you can pick up a two-handed one as well. You also have dodges and parries at your disposal, but it is all limited by a type of stamina meter represented by a few white dots under your character. Exhaust the dots with special attacks and dodges and you exhaust your ability to perform them, often just when the enemy is ready to deliver a crushing blow. Pacing is key.

Enemies can gang up on you, but fights always seemed fair enough, and even rooms that housed many foes typically only measured them out against you in waves that felt fair enough. Controls are also easy to get a handle on and include constant onscreen prompt reminders. The weapon icons also include the button needed to execute them right there in your HUD. The UI makes it easy to learn and, more importantly, remember what to press when you want to swing which tool in your arsenal. The opening stage is also a tutorial you can replay as long as you like to try and get the basics and concepts down. 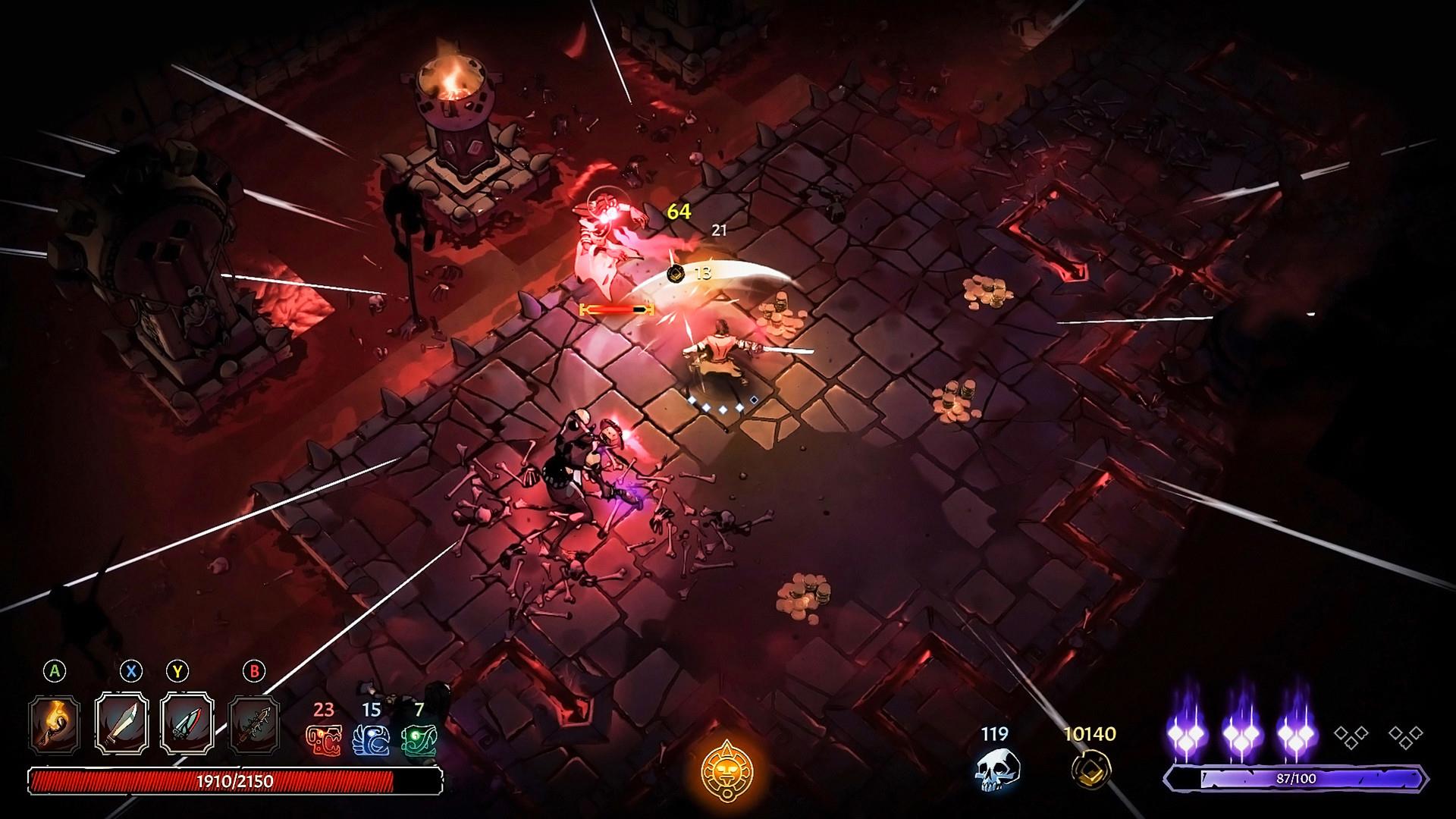 As for the runs themselves, the premise is simple: enter the cursed temple and battle and dodge your way to the boss. Each run is a series of rooms, each room randomly generated. So even if the end boss is the same, the path you take to get there is always different. You map your run based on each room's reward: a new weapon or upgrade, new blessing or item, a treasure room for gold, a health station to recharge. You can follow branching trees based on what you need in each run, no predefined paths.

But what really makes the runs unique are the blessings—and especially curses—along the way. You fight, you overcome, you score rewards and grow stronger with every few rooms. Counterbalancing that, however, is the curse meter, always ticking up in the lower right hand corner. Fill it up and you earn a curse before your next room. The curses always add at least a small gameplay modifier to make the path forward that little bit more difficult. After four curses you face the fifth and final curse, always meant to greatly reduce your chances of success. Doors aren't the only thing that fill the meter either. Certain damage can also add curse, but more importantly the rewards themselves you battle through each room to obtain. For each reward there are two prices: the gold price and the blood price. Paying in gold depletes your reserves quickly. Paying in blood leaps the curse meter forward. Just because you can't afford the reward doesn't mean you can't have it, but is the cost worth the benefit? A question you will find yourself eventually asking on every run. 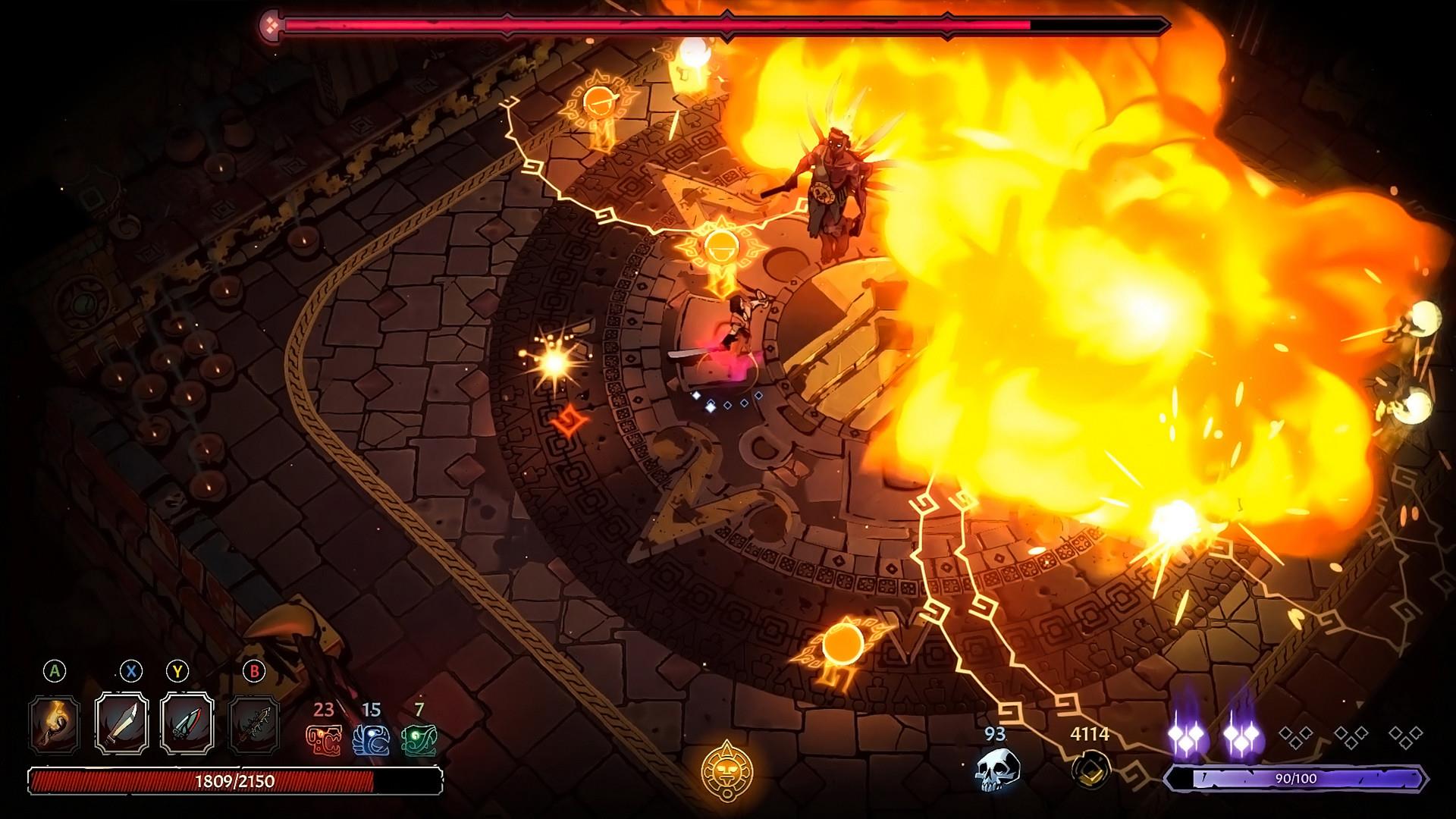 Runs also gain a variety between the many gods you must face. At the start you have three paths to three bosses, each environment unique with its own traps, enemies, barriers, and boss. While the maps themselves are generated randomly, they are done well, always feeling unique enough even with the familiar objects that comprise them. In the end, though, a run can be doomed before it starts with some unlucky RNG. But having a good load out and more options to reroll for better chances at gear are key to getting over the crux of the level's boss. It all harkens right back to benefits of allowing some small measure of progress to carry over with the upgrades and unlocks. Even when RNG was against you and you couldn't chance upon a good load out, you will earn something for your troubles, but more importantly what you earn will improve your chance of not running into that rotten luck in the future.

Visually, I love the style and execution of Curse of the Dead Gods and the audio matches well too. The cell shaded characters makes for a pleasant display and enemies and traps clearly display their actions and intentions. it's up to you to be quick enough to react the right way, not to get tricked by what you can't see - even though lighting itself takes center stage in the visuals. You alternate through light and dark in each room by swapping between your weapons and your torch. There are also numerous penalties and bonus associated with being in light or darkness. And braziers along the way give you an opportunity to light the area and fight with sword in hand but clear eyes on the enemy. Even just traversing the dark sections with torch in hand is well done with the movement of the shadows as they dance along the walls. It's a very pretty game in motion. 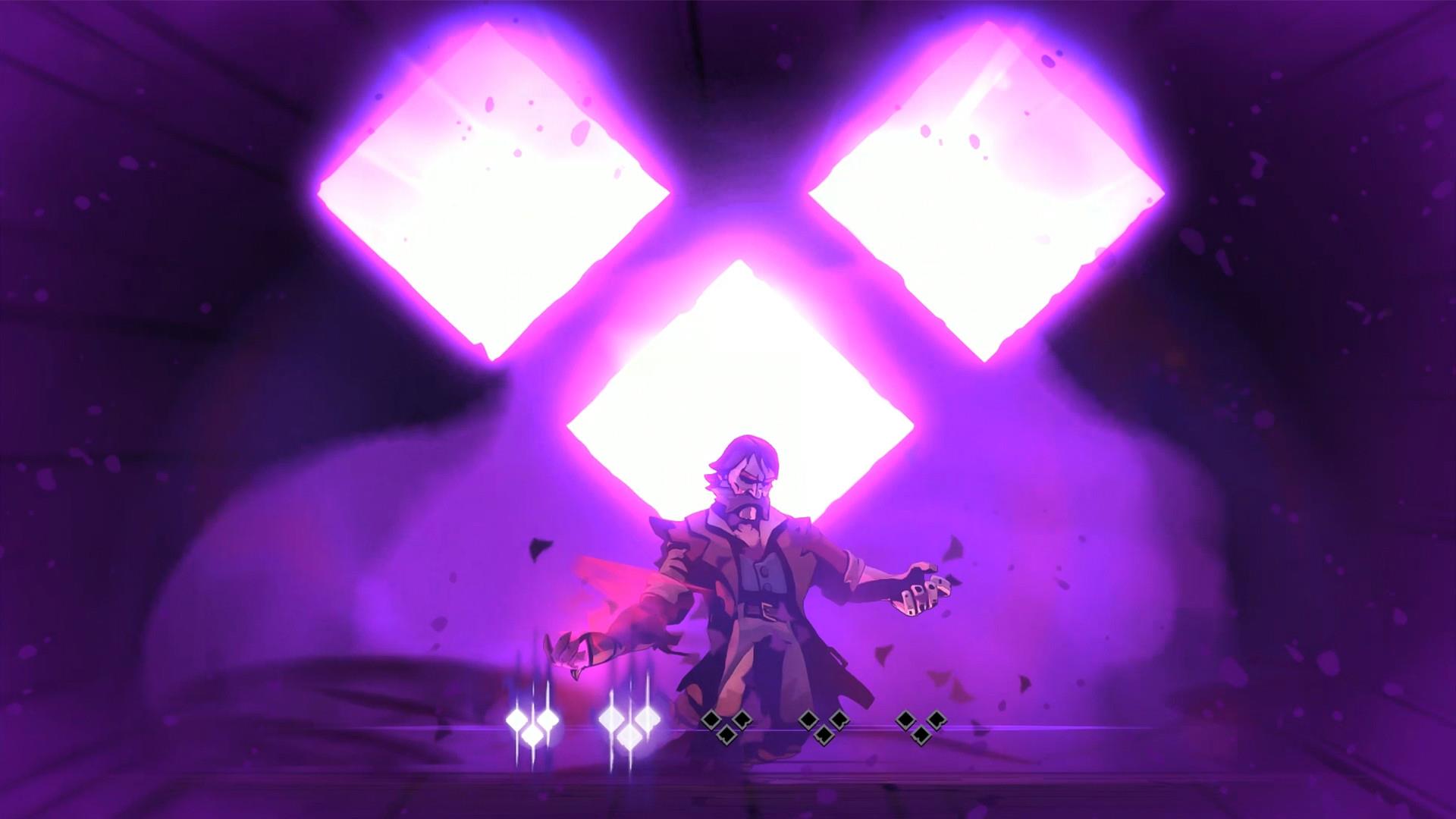 Text is just too small for the switch LCD, but controls are excellent and the eyestrain ends up being minimal because once you squint your way through the tiny text to understand whether to take or leave your latest finding of loot, you spend the vast majority of the game humming along exploring or fighting and not needing to read. This is a pretty common complaint for games ported onto the Switch, and everything looks clear and well-sized when docked and projected onto a full-sized television, but it deserves a small demerit nevertheless. The end result isn't really bounded by that one criticism.

Curse of the Dead Gods is an excellent game, offers unique runs, progression even in failure, but still levels the playing field after each run to make the next one a new challenge. The curses do an excellent job to balance rewards, there is a good combat system that rewards mastery and patience, and enemies that offer a fight but never feel cheap in their difficulty. The game itself is well paced, and can be played in chunks that don't require the blood price, even if you do find yourself paying forcing your character to pay it at the various altars along the way. There are probably even more good things I could say about the game, but I think I'd rather spend that time jumping back in for one more run.

Curse of the Dead Gods is a finely polished roguelike that embodies the best elements of the genre. It has a battle scheme that is simple to grasp but requires skill to master. It balances the progression of each run with penalties to maintain a steady, yet shifting, challenge. It brings a few elements over that a roguelike purist might scoff at, but does so purely to the benefit of the game, and aids a progression system that feels meaningful while not demeaning the overall challenge. It nails that hallmark of the roguelike where you always feel like maybe dipping in for one more run.