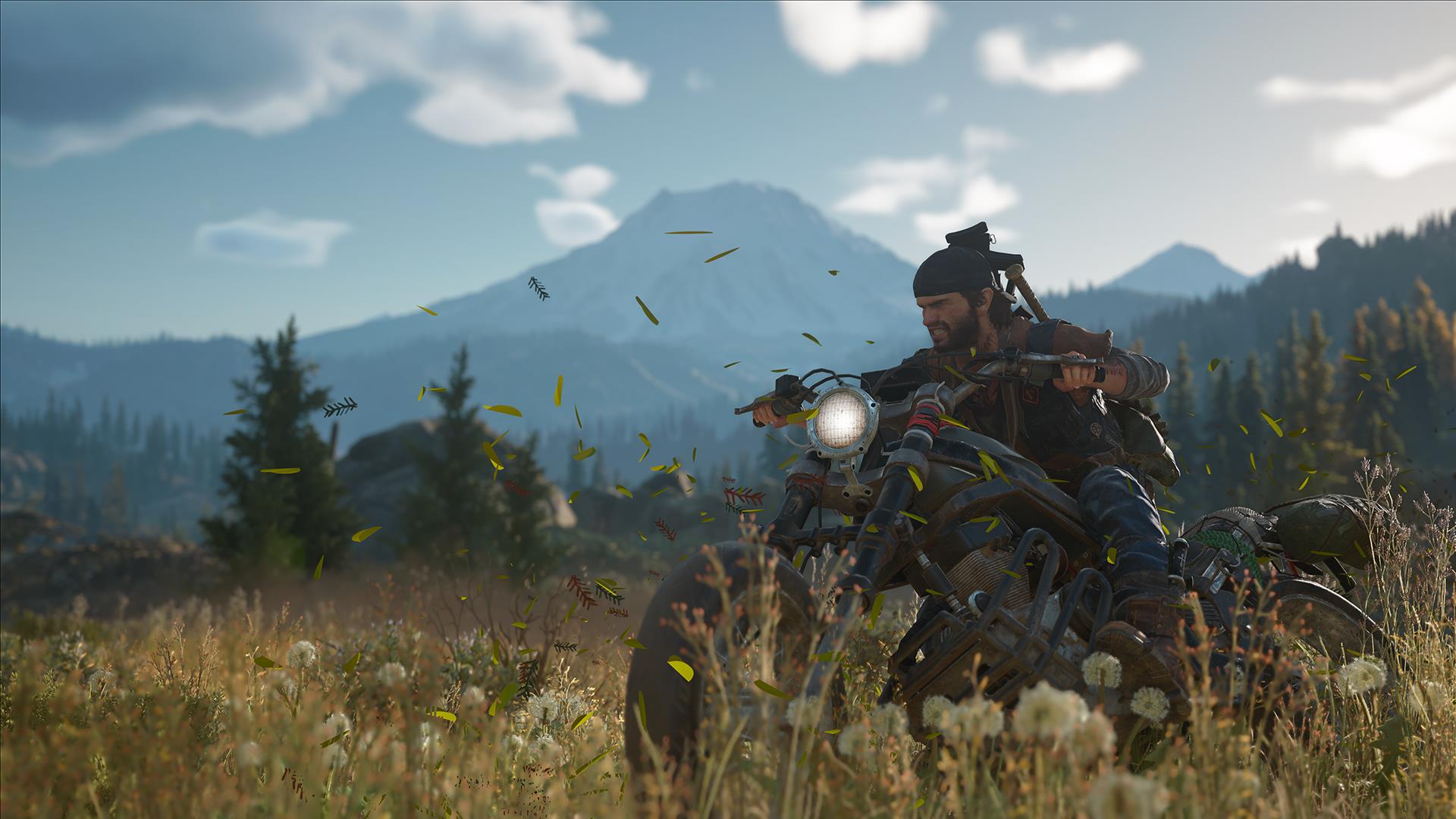 Hey, Deek. Been a couple years, you and me. I’ve gained a few pounds, but you: look at you. Maybe you didn’t trim anything off your load screens. But you got that 4K glow up everyone was waiting for. Not to mention a field-of-view slider and ultrawide support. No Ray-Tracing, though? Seems like that would’ve been a big deal nowadays. Not saying you don’t already have pretty lighting, Days Gone—you do. Seems like the move from PlayStation exclusive to PC has been good overall. Even if I already thought you were pretty hot back in 2019.

Days Gone, the post-pandemic open-world zombie survival-action game by Sony’s Bend Studio, can now run at 60 frames per second. That’s first and foremost, right? If we’re talking particulars, you can push it to double that or more with some tweaking: lower your resolution, turn off VSync, narrow your field of view down to 50. Or you can test your system’s limits by doing the opposite. Get every pixel on the screen you can, turn on VSync if the screen tearing is getting to you, and widen your field of view past the default 70 and on up to 100. 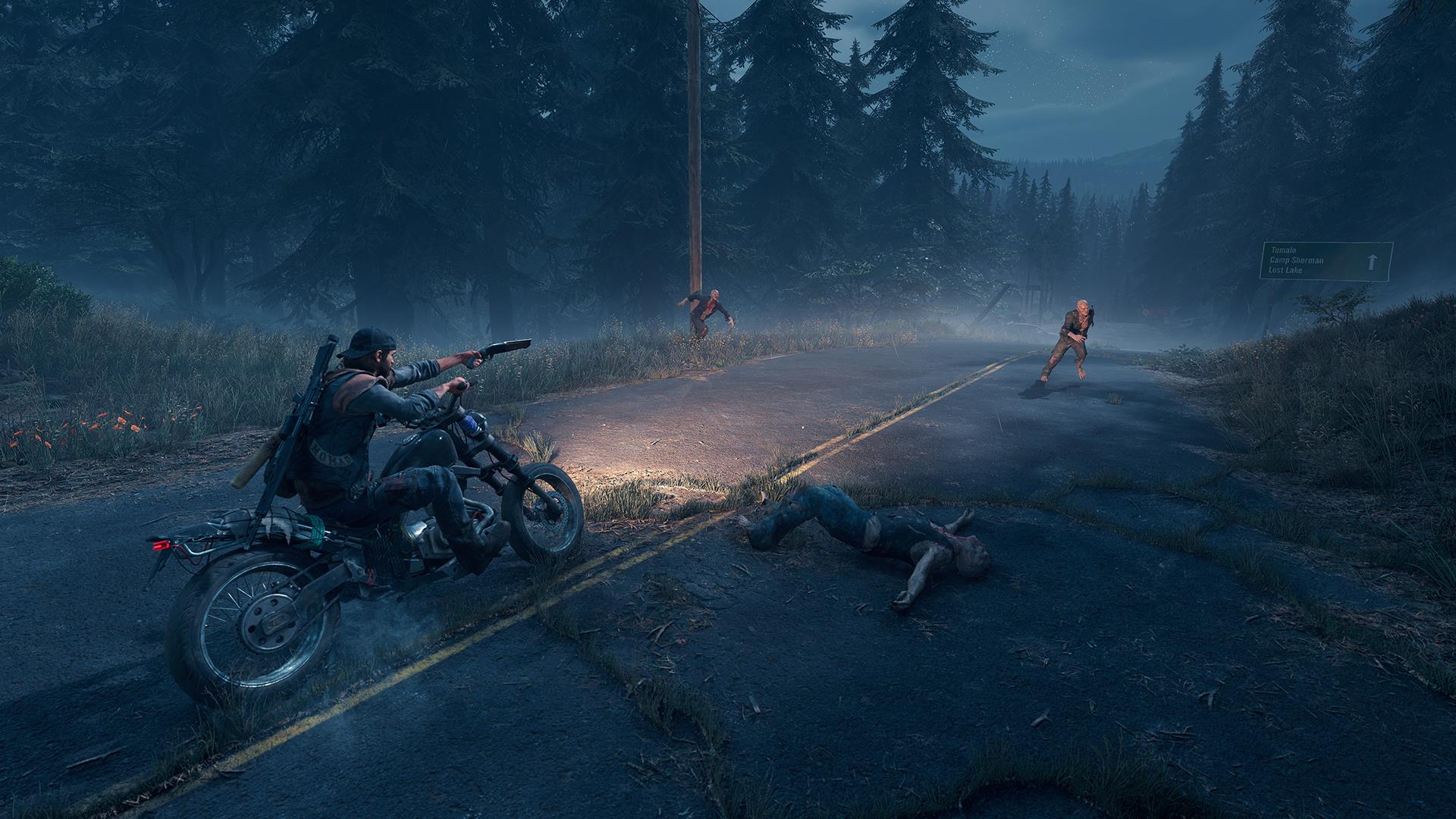 Every make and model of monitor is different, but I have three settings to look at for refresh rates. There's 50 Hz, 60 Hz, and 59.94 Hz. That last one is apparently some setting that’s grandfathered in as some sort of historical relic. I’ve read the explanations. It doesn’t mean I understand them. All I know is, 60 Hz--60 fps--keeps the action moving wonderfully, even if I’m secretly one of the folks that was satisfied with 30 fps on my launch PS4. Debate all you want. Sixty frames per second is there for the choosing or more if your monitor supports it.

On that same note, there’s a frame limiter, if you aren’t the unlimited-frames type. Knock it back down to 30, if you want. Go up 30 frames at a time from there, all the way up to 300, if you’re a zillionaire with a posh enough rig to push those kinds of numbers. 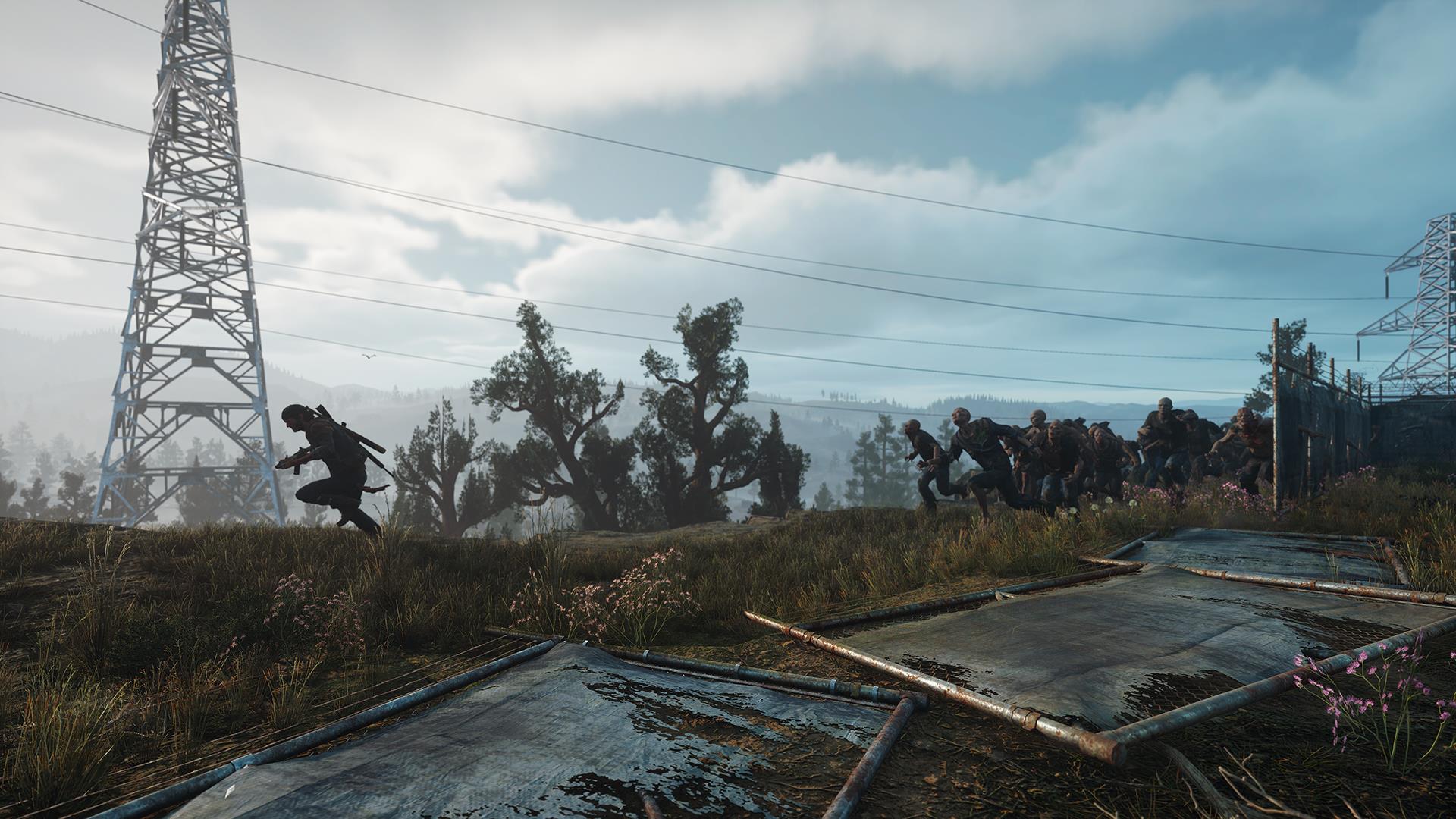 Also, I don’t have a monitor that supports HDR, but if you do, when the menu asks, “Should High Dynamic Range be enabled?” you say yes. Eastern Oregon, where Days Gone takes place--and where Bend Studio calls home--is a beautiful place. It’s a beautiful place in a state that’s got a lot of beautiful places. Oregon can’t claim light and shadow, but it certainly can claim those godrays streaking through the tall pines, or having the sun poke out from behind Mt. Bachelor or Three Finger Jack, or just how much of the Milky Way you can take in with so little light pollution in the Oregon wilderness.

For the most part, it’s a solid port. I’ve read that Horizon Zero Dawn, another Sony-brand game that made the leap from PlayStation to personal computer, didn’t fare as well at first. But Days Gone has done well. That opening cutscene, though, woof. It didn’t matter if I got my frames to a rocksolid 60 fps, the cutscenes had their own struggles. I played it and restarted multiple times. Same muddy textures plague the thing no matter how many times I try. It clears up. Takes only a few seconds. But things were choppy during camera transitions. That's too bad, as far as putting your best foot forward is concerned. 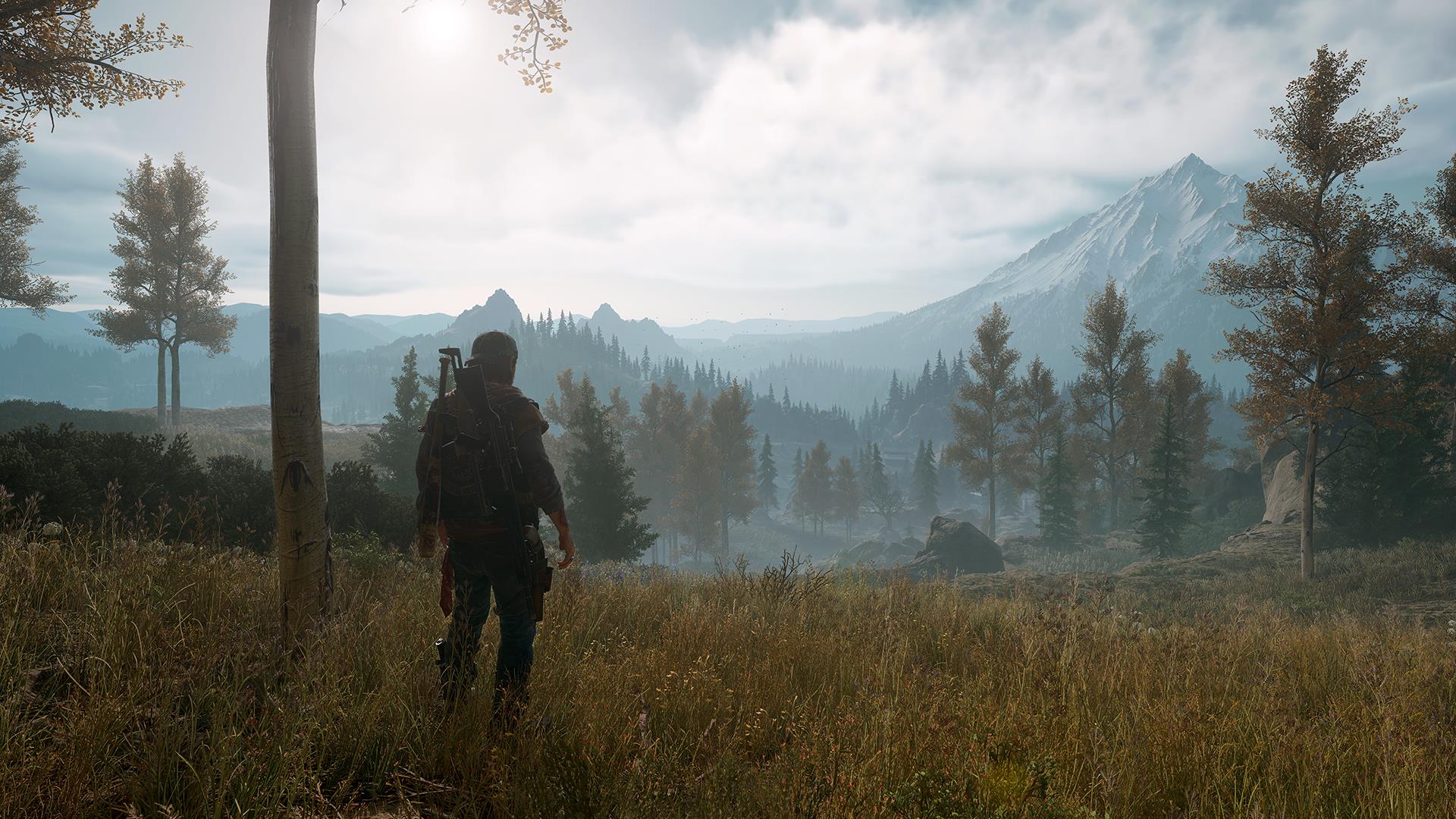 All these display options are in service to Deacon St. John. That’s your boy Deek I was referring to earlier. Part of a motorcycle club riding out of Farewell, Oregon, he’s a tough guy with a code of honor. Must be a real pain in the neck the rest of the time, though, if the excellent facial mocap is to be believed. He wakes up in a high state of readiness, owing to his limited but close personal friendships and his long-gone military background. He can think things through as well as let his emotions get the best of him. His sincerity would be too much, if it weren’t impossible to not root for the guy. If Deacon St. John ever told me he was going to hunt me down and take me out, I would believe every single word he said. If he told me he was my brother and had my back for life, I would rest assured that was the gospel truth, too.

Days Gone is still a ton of fun zombie action, and also some meaningful moments that don’t come off as too cringey. The scares are never scarier than jump-scares, and the blood and gore never gets too personal, which leaves the open world playable for dozens of hours. Low to medium tension is the sweet spot for a post-pandemic apocalypse like this one. Side note, saying “post-pandemic” nowadays sounds like I’m talking about COVID-19. I’m not. Coronavirus just robbed everyone of this perfectly suitable phrase for a zombie shooter that doesn’t exactly equate to an apocalypse, but also hints at a complete societal breakdown. 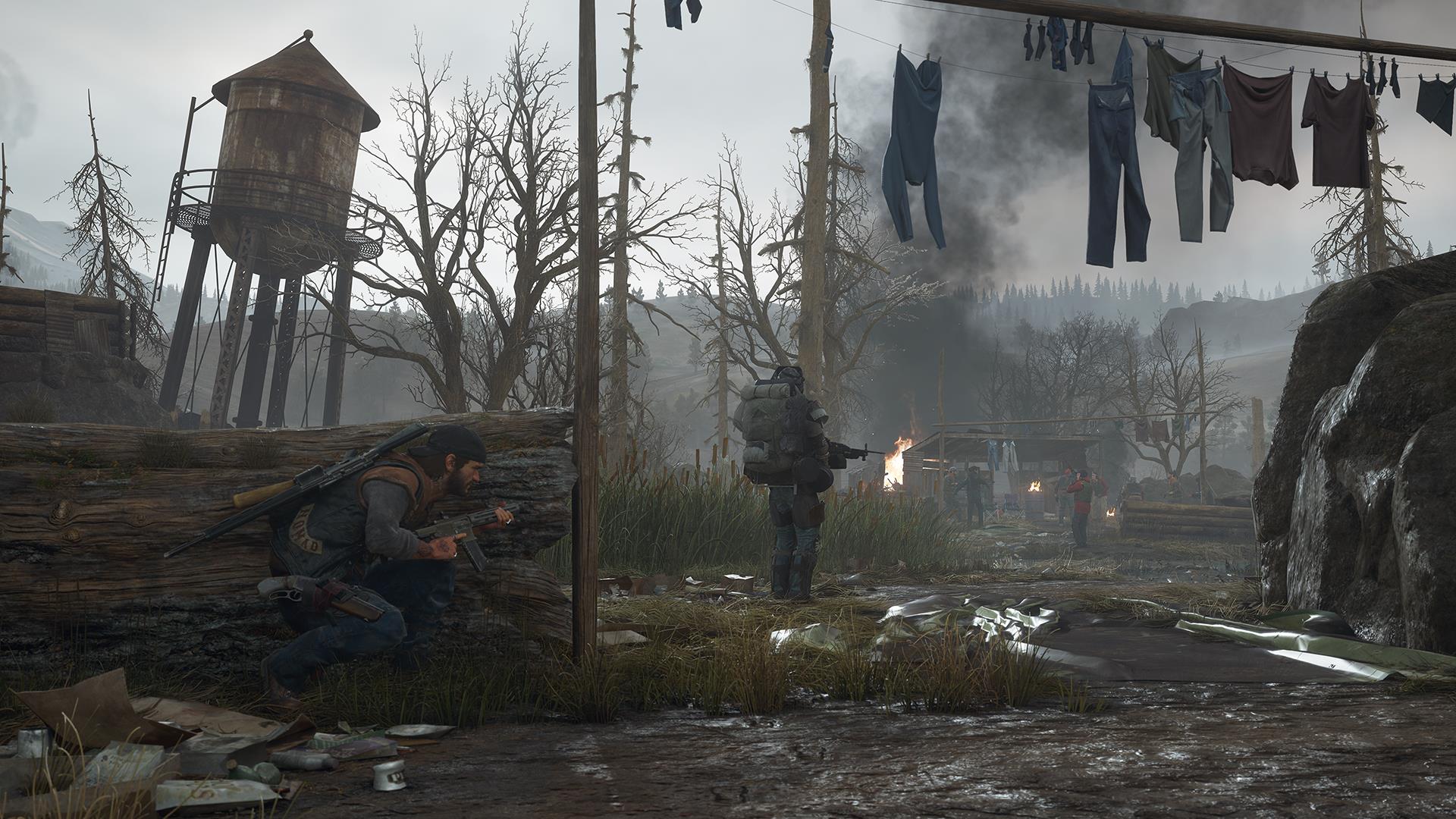 Aside from the PC’s display options, not a ton changed in the porting process from PS4 to PC. And that’s fine. The game is barely two years old. It’s not overdue for any kind of remake for another decade. It’s just a solidly composed work that broadens Days Gone’s audience from the console space to the desktop space. I would ask for shortened load times. But I didn’t get those. Every grueling minute--actually two to three minutes, starting from Steam until your butt hits the motorcycle seat in-game--is largely intact for the PC audience to enjoy as much as the PS4 audience. Slash sarcasm. And if I had ray-tracing capabilities, I’d really be looking forward to going RTX On for anything and everything that had the developer support to do it. But I’m not part of that one percent of gamers with that kind of hardware yet, so I can’t complain.

Days Gone’s post-pandemic body now runs at greater than 30 frames per second. It’s got HDR lighting, if you can swing it, and ultrawide monitor support, if you can swing that, too. Aside from the opening cutscene, the game runs [insert “buttery smooth” or other suitable food-related analogy here] after you make a sandwich while the game initially loads, limps through the first few seconds of cutscenes, and makes you do one of those choppy 360-degree camera spins whenever you first load up. Days Gone, though, has been carefully ported, and gives PC gamers just enough display options to lord their bragging rights over the console space.

Minus ray-tracing support, Days Gone on PC brings a lot of goodies that PC gamers look for. There's 60 Hz refresh rates, unlimited frames per second, ultrawide resolutions, HDR, and even an increased field of view. The technical aspects of this port are solid, even if I have to do a framey 360 spin with the camera whenever I first load up.