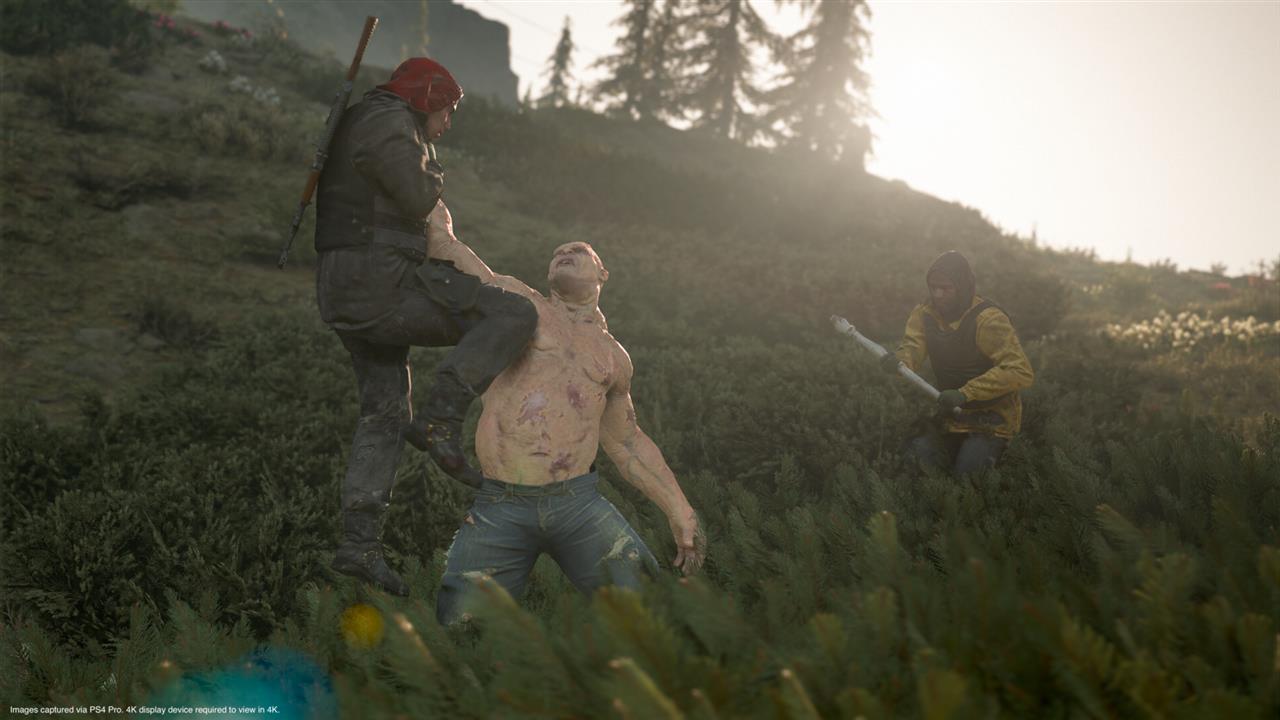 Oregon. It’s lovely here. It’s high desert scrub mixed with evergreen forests. It’s big lakes and little lakes carved out by volcanoes and glaciers. The Cascade Mountains are the constant backdrop to this Oregonian wilderness. The mountains seem to climax around Central Oregon by bringing Mount Bachelor, The Three Sisters, and Three Fingered Jack in real close for a family portrait.

Oh, and there are “Freakers,” too. That’s what Days Gone calls its brand of zooming zombies. Freakers are fast, dumb, prone to stabbings in the back of the skull, and you’ve got an entire open world action adventure to give them the business end of your boot knife.

You, Mr. Boot Knife, are actually Deacon St. John. “Deek” to those that know you. You’re a member of the Mongrels outlaw motorcycle club and you’ve got the patches to prove it. People that trigger your anger mismanagement have a tendency to get a gun pointed at their face. People that love you know, deep down, that you’re just a big old teddy bear. Those people are rare, though. 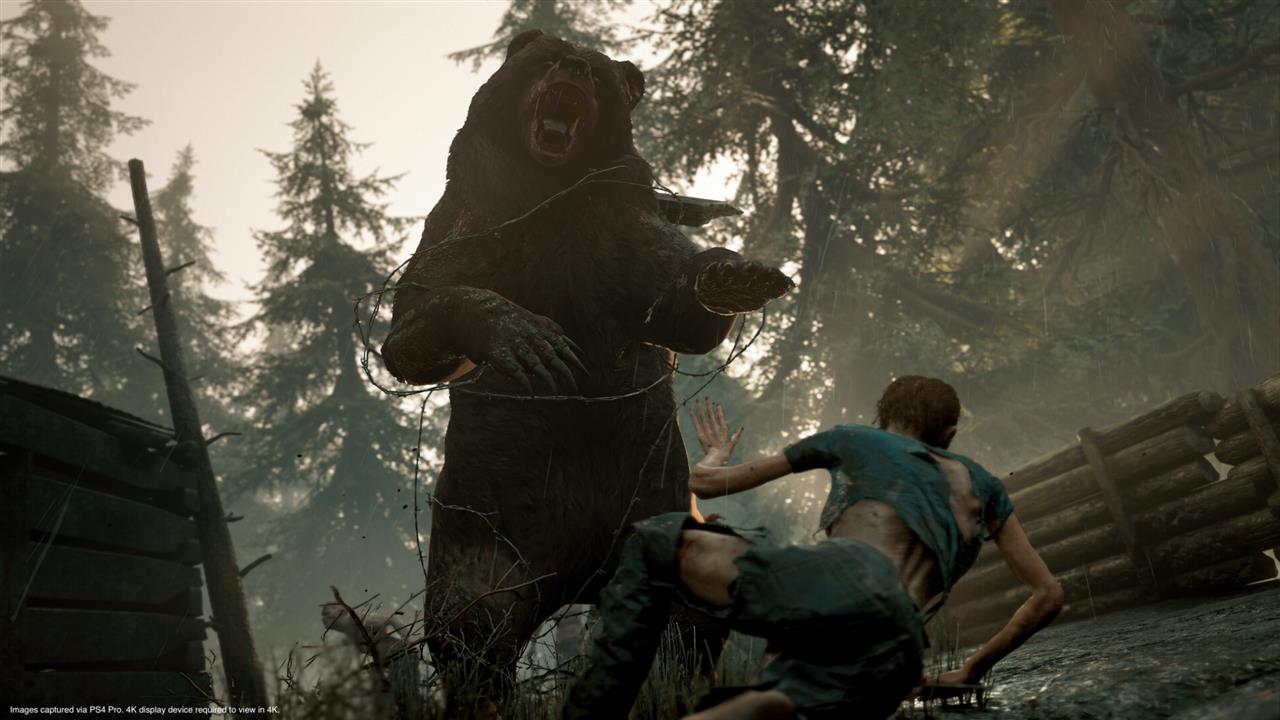 So, what are we doing here? It’s the post-apocalypse, for one. Those Freakers I told you about? Finding out why regular folks started turning into zombies is the whole mystery in Days Gone. After losing your wife (sorry, it’s in the opening cinematic) you and your buddy, Boozer, are trying to replace your bike that was unceremoniously chop shopped, so you can eventually leave this place and head north. But Boozer isn’t doing so well. He had a run in with some Rippers. They basically didn’t like his tattoos and tried to cleanse Boozer’s skin with a blowtorch.

But you’ve got your work cut out for you. You’re not unknown around these parts, but you’ve been missing in action for a while. You might’ve burnt a bridge or two on your way out. Meaning, you’ve got to build up trust with different camps of survivors once again. This brings the open world into play. Camp managers have needs. You’re basically a freelancer, at this point, having to run some dangerous errands to get you back up to a level where you can get Boozer healthy again and move on down the road. Got to work if you want to eat, though. 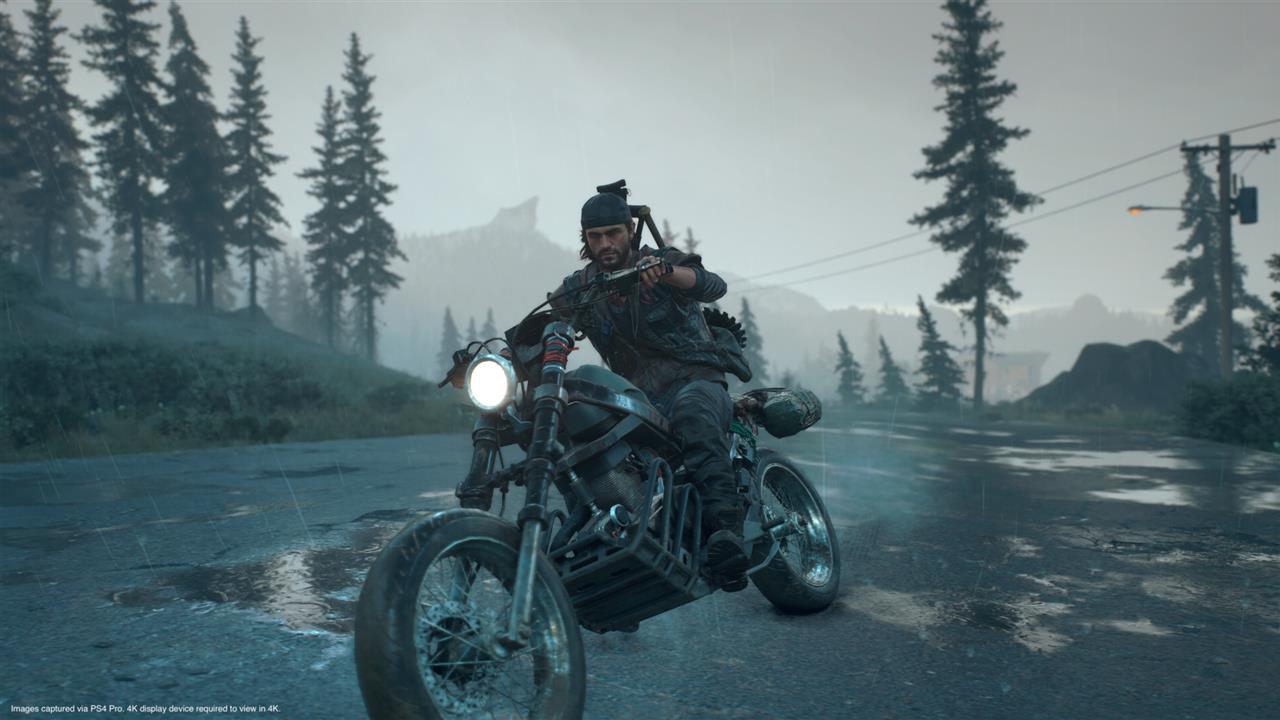 Boozer is your bro, but your most valuable traveling companion is, of course, your motorcycle. I’d say you won’t get far without it, but that’s not necessarily true. You could hoof it if you want. You could run these story missions, side missions, and random encounters on foot. But that would add a lot of time to the 30-plus hours you’re already going to spend on the critical mission path alone. So, do yourself a favor. Take care of your bike. Learn what it can do. Do donuts in a parking lot. Ride it right off a rain-slick highway. Jump it off a collapsed bridge, then repair it with salvaged scrap when you land wrong on the other side. Make it your own. Paint it and slap some decals on there. When you’re done fooling around, though, swap out that weak engine, get a bigger gas tank (boy oh boy, get a bigger gas tank), put some fatter wheels on it, and throw some saddlebags on there to hold more ammo. To my untrained eye, a lot of upgrades from level one to level two, and from level two to level three, didn’t wow me with major appearance changes. But you can feel your bike getting better, all while your bike handling skills mature as you play through.

You’re not going to customize Deacon St. John. He’s got his look down pat, and you don’t have the intestinal fortitude to tell him to change his clothes. You’re going to wear oily jeans, your motorcycle club vest, a broken-zippered hoodie, and big clodhopper boots. The weapons on your back can be swapped out to accommodate your playstyle, but everybody gets to wear the same backwards ball cap to his low-profile wedding. 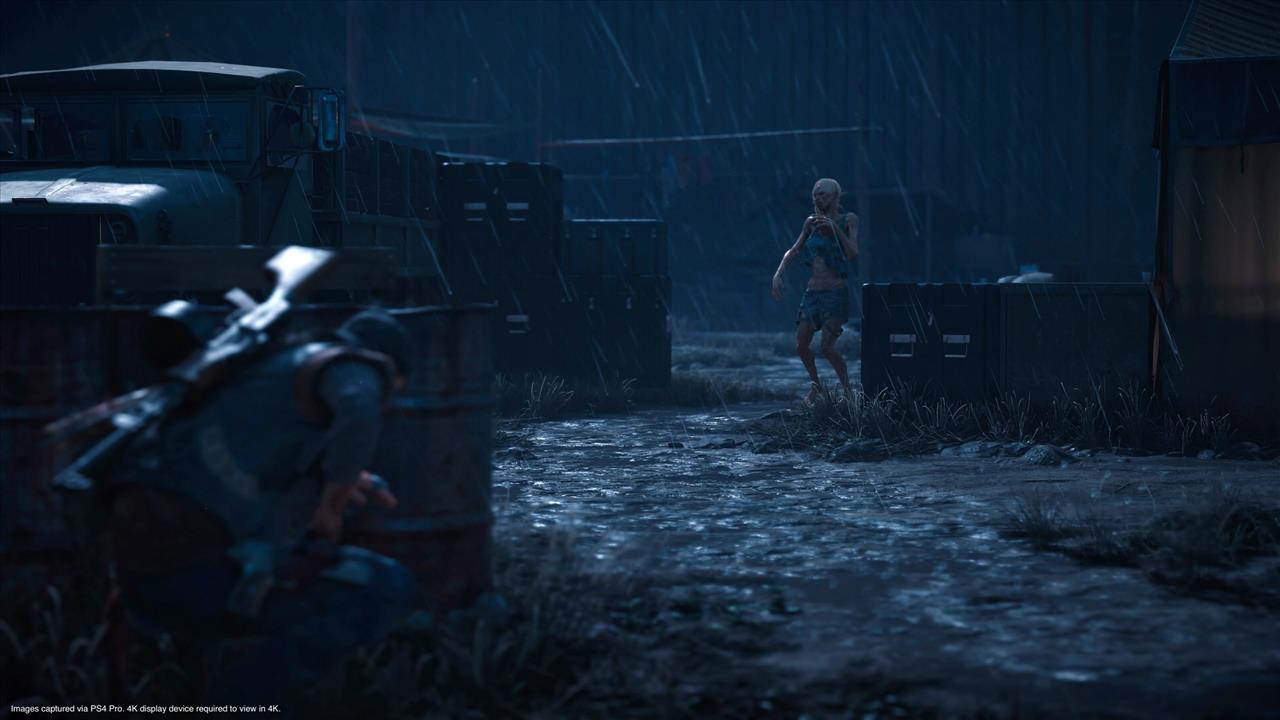 The open world is available day and night, rain or shine, sleet or snow. You’ll get all of those conditions, too. During the day, more Freakers are out, but they’re weaker. At night, fewer Freakers wander the woods and ruined towns, but they’re tougher. Everyone’s hearing is worse in the middle of a rainstorm, and snow accumulates on the slushy ground, complicating your patented donuts-in-the-parking-lot maneuver. All of this makes a huge difference in the beginning, when your skills and abilities are zero and zilch, and ammo feels like the rarified commodity you’d expect in a survival-horror game.

Let me clear something up real quick. This isn’t anything like World War Z, the other zombie game that came out only one week prior to Days Gone. One wrong move in Days Gone can put you in a bad situation against one or two Freakers, let alone five hundred of them. You don’t have enough bullets to take on those huge zombie hordes we all saw in the early release footage. You can eventually work up to the notion of taking out an entire horde. But it’s going to take hours of game time and upgrades, not to mention planning and actionable strategies to do so. The trophies you collect from Freakers—that you turn in for trust and camp credit, essentially—are going to be sparse in comparison to the comedic body counts you’d otherwise rack up in World War Z. Days Gone is more like 28 Days Later meets Sons of Anarchy. 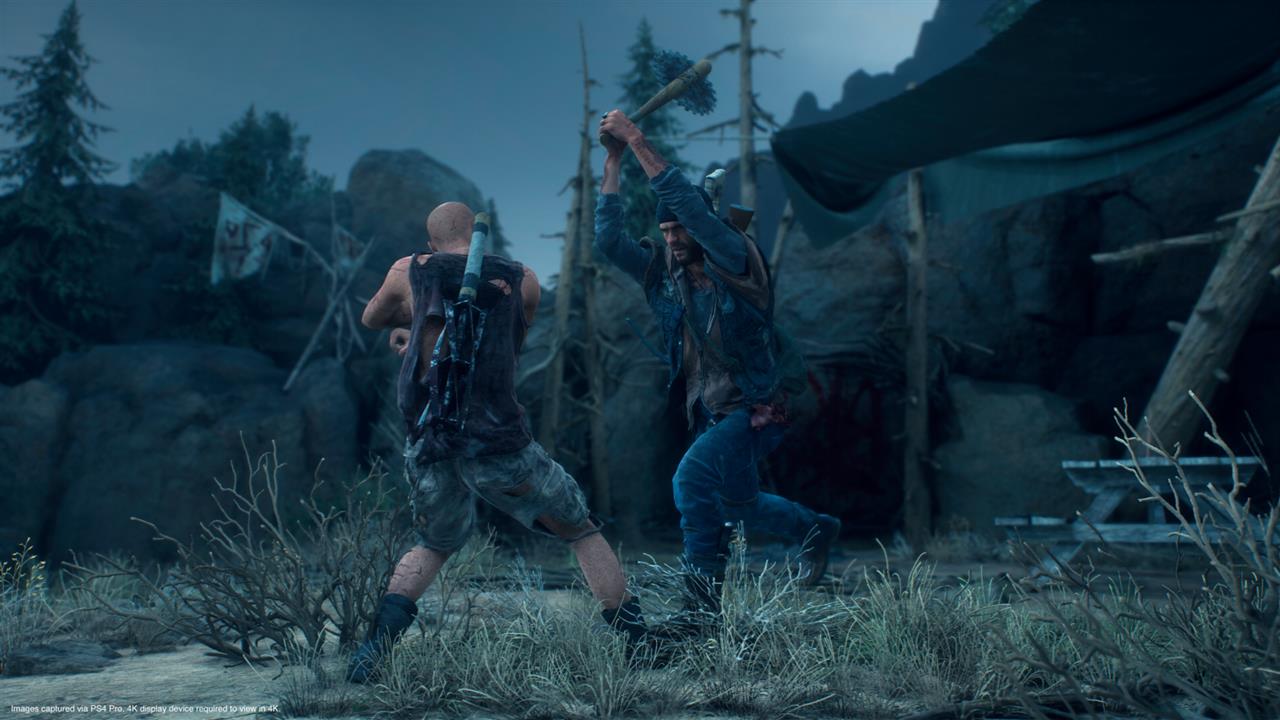 Moment to moment gameplay choices are pretty cool. Like finding a red fuel canister, running it back to your bike, filling up the gas tank, tossing the canister onto a Freaker nest, shooting it, blowing it up, and setting the whole Freaker nest on fire. Whoops, that alerted a nearby horde, so now you’re running for your life back to your bike and burning rubber out of the scene. You stop, regain your wits, strip a tree sapling of its branches, craft some crossbow bolts, and wrap a bandage on that wound. You jimmy open a car hood, fetch the oil filter from it, plug it onto the end of your 9mm handgun, and now you’ve got a silencer to shush things up a bit. Deep breath. Get on your bike. Roll downhill, hand off the throttle. Then stick to the tall grass, or at least throwing yourself behind low walls for some mushy-feeling cover shooting.

Other moments can tie in more specifically with catchy locations. Like when I was chased in a circle around Hungry Jim’s pancake house, where a two story tall lumberjack leaned on a stack of pancakes that came up to his chest, an axe over his shoulder, and me stringing a dozen Freakers in a line behind me, me shooting at propane tanks along the way, sending Freakers tumbling across the street from the explosions. 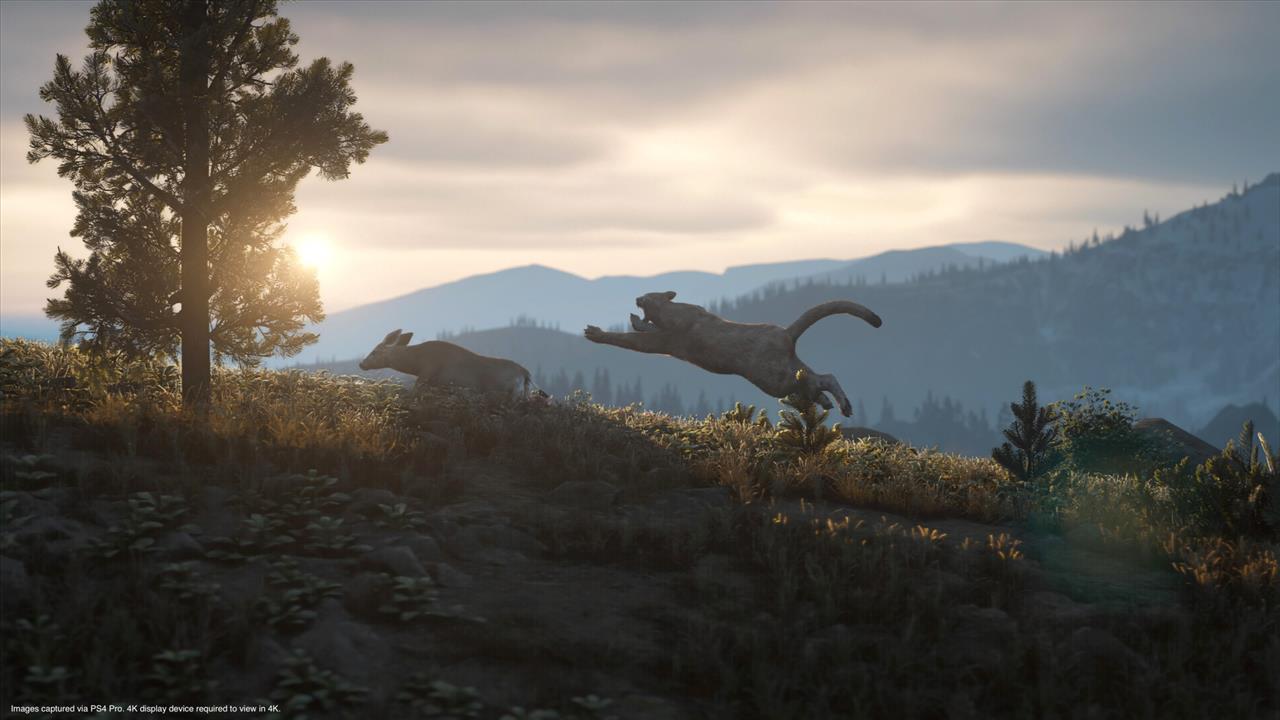 The environmental storytelling doesn’t extend much beyond someone writing “They’re coming!” on a yellow school bus, or someone else painting “Go away!” on an enemy camp’s tarped-over entrance. But the cinematic storytelling—the cutscenes—are excellent, combined with Deacon’s propensity to talk out loud to himself. Yes, he’s got a tender spot for his fellow survivors. But his take-no-prisoners attitude gets grizzly when he’s yelling at a sniper he just took out, or he’s sent a cultist Ripper up in flames with a Molotov cocktail. Deacon is thoughtful but rather talkative, even if his verbosity is punctuated with a lot of stern looks and jaw clenching.

For a game about being in a motorcycle club, I sure would’ve liked to spend more time on my motorcycle in the beginning. Right off the bat, I had to stare at the mini map in the corner far too much in order to navigate the landscape. Then there's the getting tackled off my bike by Freakers, getting thrown off my bike by tripwire strung across the road, getting shot off my bike by snipers, and spending a scary amount of time on foot away from my bike. Days Gone is a slow burn. Not that there aren’t enough enemies running around, and not that there aren’t rival camps keeping the AM radio airwaves tense. There plenty to do. But it took me hours to acclimate to the choppy gameplay pacing. I hated hopping off my bike every 30 yards because it’s a game about salvaging supplies and there were more supplies to salvage. At least at first. Again, with experience comes improved gameplay. You become more selective in your sidelong activities, and then you realize don’t have to stop and pop every single hood, every single trunk. 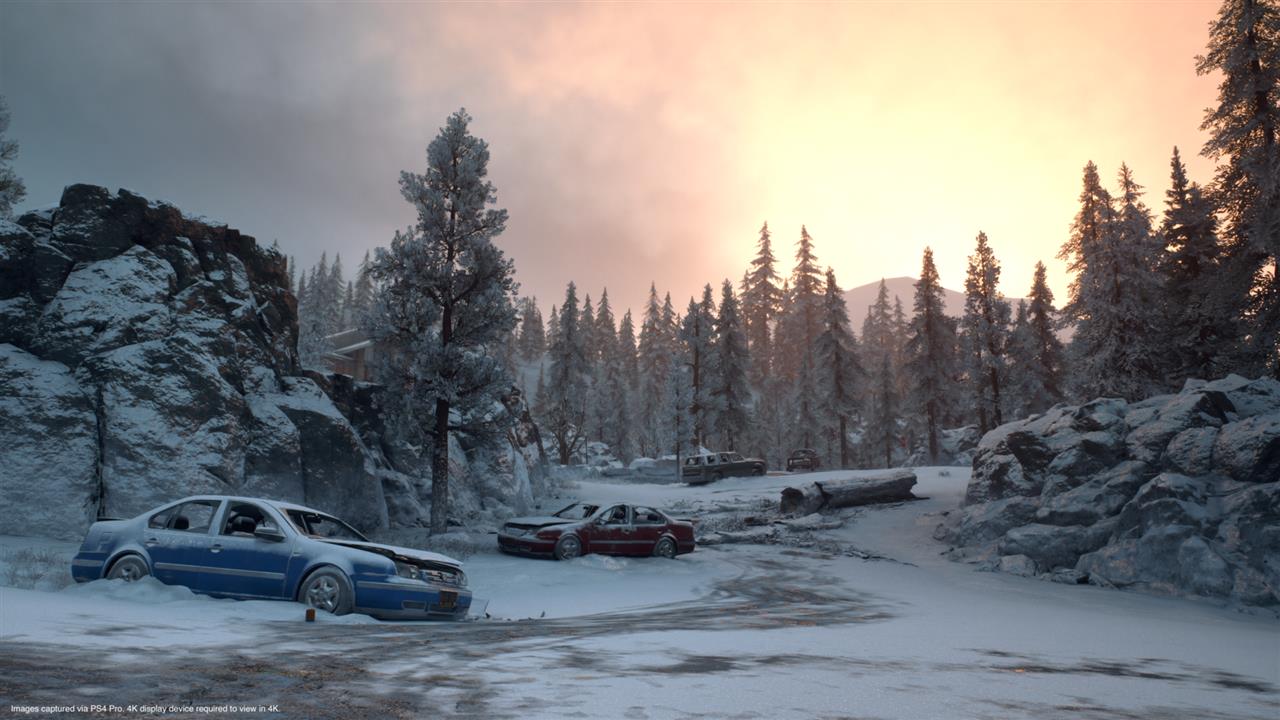 Most importantly, as the map opens up more and more—after, frankly, too much back and forth in the beginning—then you start to get those “hit the open road” moments. Those are what keep me coming back. I’ve become quite attached to my bike and the road. If I had to go on foot to accomplish some objective 100 yards off, I'd start to get separation anxiety.

Getting chased by a swarm of Freakers can be exciting. Getting caught by a swarm of Freakers, however, is strangely anti-climactic. You just get blocked in, you see the “push left on the D-pad to heal” prompt pop up, and then you’re back at the reload screen before you know it. On a vanilla PlayStation 4, the load screens are long, I’m not going to lie. I bet the loading is much snappier on a PS4 Pro. But these loading screens, regardless, are the trade off for having access to a large and ever-growing open world map with no loading between point A and point B. Despite that, it’s hard to complain about much on a technical level. Deacon’s hands and feet touch every rung of the ladder perfectly. Freaker hordes place a lot of bodies on the screen at once. Only a couple times did I completely fool the graphics renderer and leap off a cliff or ride up a hill it wasn’t expecting me to, landing me in a zone with temporarily blunt textures and poorly rendered graphics. And the frame rate slowdown during a good rainstorm is almost worth it to enjoy the heavy precipitation. Even as I grew increasingly familiar with the Central Oregon terrain (it’s lovely here), the dynamic weather patterns kept me actively thinking about how I’d take this corner this time, or how I’d take that jump next time.

Once you get into a rhythm with Days Gone, it feels good, man. Going all Excitebike up into the lumpy hill trails. Whipping a U-turn before parking for a quick getaway. Sliding between shooting zombies, stabbing zombies, and setting zombies on fire makes for some interesting choices on a minute by minute basis. Refueling, bandaging, reloading, and picking flowers for the kitchen back at camp fills in the downtime, if I already happen to be off my bike anyway. There are definitely worse open worlds out there. Deacon St. John just also happens to be one of the better acted characters I've ever seen inhabit a post-apocalyptic open world. When it comes to Days Gone, come for the zombie hordes, stay for the Pacific Northwest eye candy. It’s lovely here.

It took a few hours to get under my skin. But now that I've gotten into a rhythm with its post-apocalyptic horror-survivalist aspects, Days Gone puts on a good little self-serious road drama.