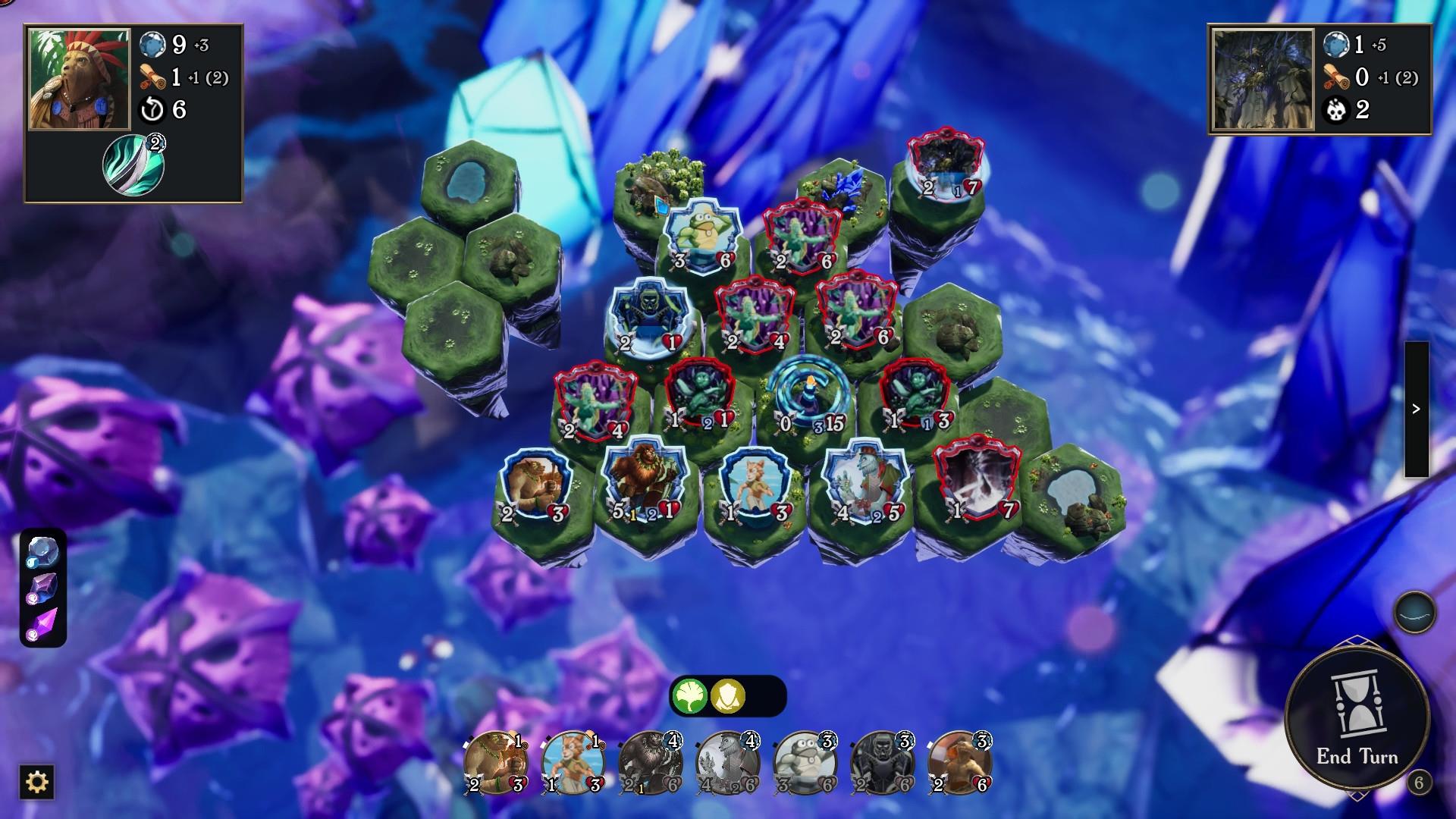 There is a lot to like about what Sidereal Studio is doing with Quinterra. It seems to straddle a few genres like Collectible Card Games, roguelites, and turn-based tactics games, while incorporating clever ideas of its own. The first comparison I feel forced to make is to Faeria. I love Faeria but the comparison only needs go so far as both games incorporate turn-based strategy on a changing hex map. To go any farther risks missing what I think Quinterra is meant to be, the truth of it being right in the game's own description: a "roguelite turn-based tactics game." 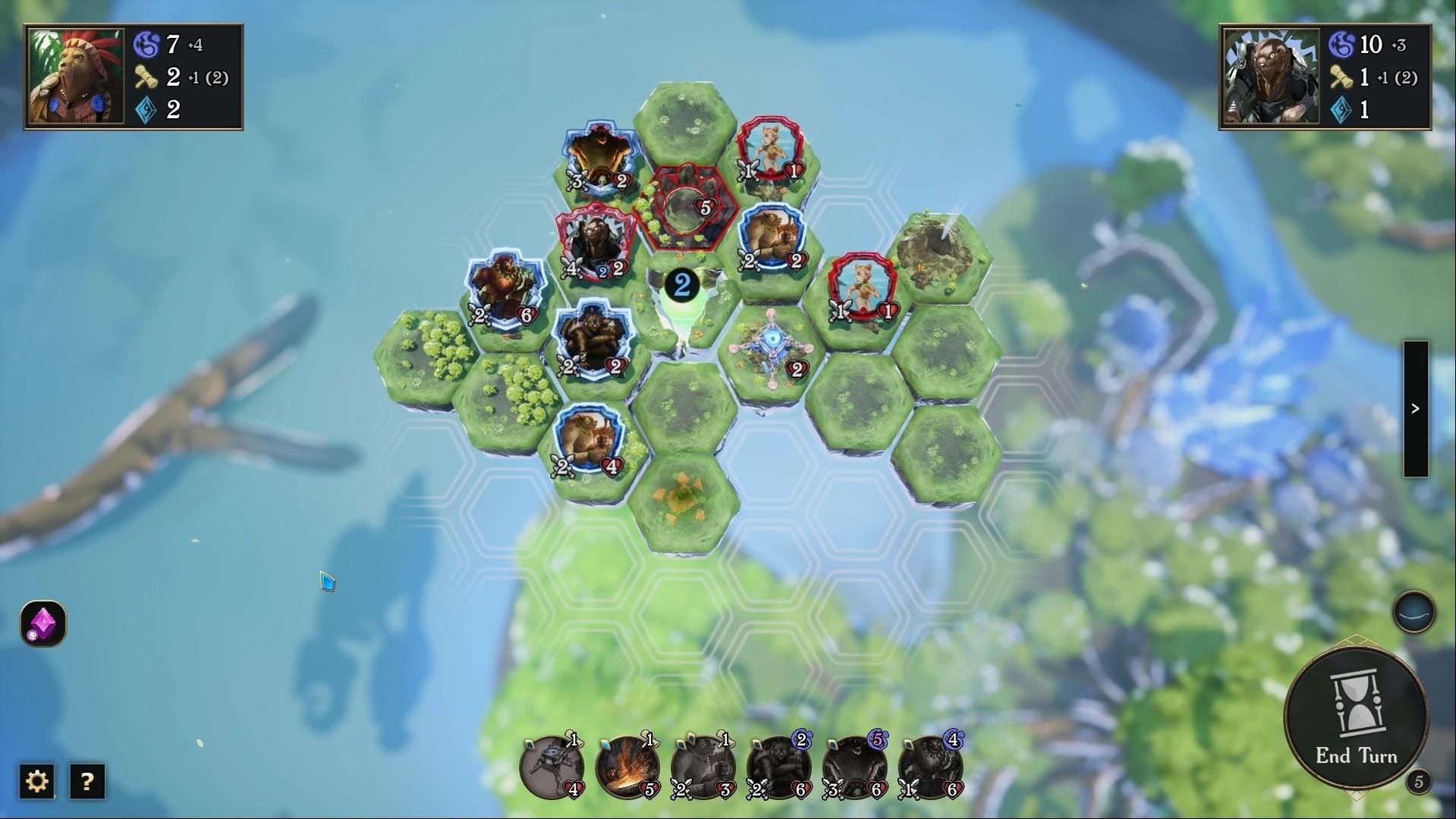 Sidereal isn't trying to post it as something it's not. This is "roguelite" not roguelike. Yes there is a randomly generated map and set of trials, but it really is more of a reshuffle of existing battles and loot options than something being scripted entirely new. And that's cool. Better to have well-thought-out and crafted challenges presented in a random order than half-baked challenges at the mercy of the RNG seed that populates them.

Also, this is not a collectible card game. Army building has elements of deck construction, but deck based games revolve around a central loop of running the RNG of the deck shuffle that re-orders your card output. In Quinterra there is very little RNG to quibble about once the board is laid down. Every unit you draft, every piece you lay down, every tile you take off the board are all by intention, not luck. That's the fundamental difference with this army drafting game vs. a collectible card game: you are in much more control of every move you make. 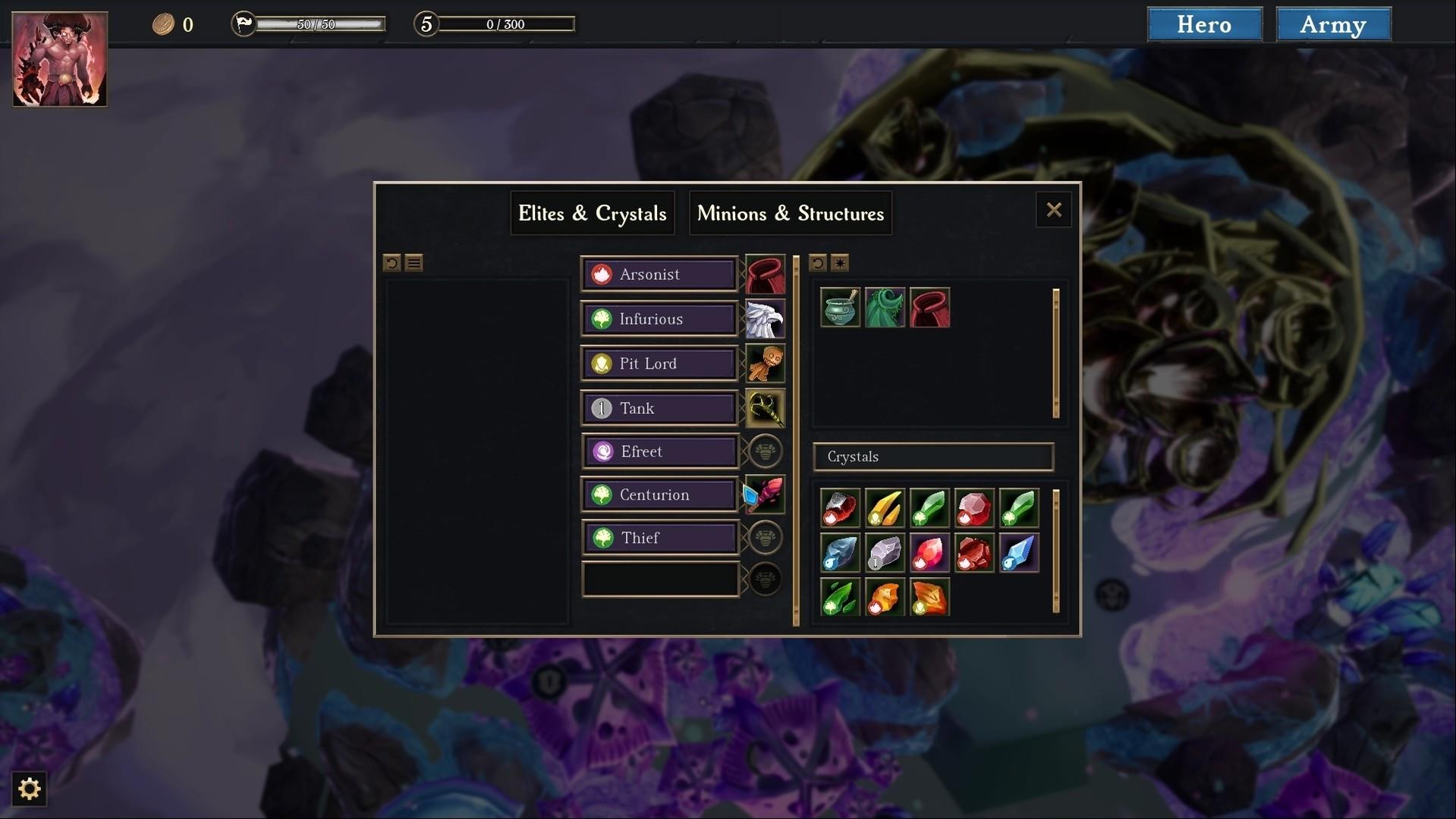 And that's where we must be careful with those comparisons. Faeria feels similar because it looks similar. It's played on a hex grid you control and you take turns laying down tactical attacks. But in Faeria you build the grid as you rotate through you and your opponent's turns. With Quinterra the board is laid out before you from the start, and you remove a piece per round as more tiles drop in. With Faeria you construct a deck before ever setting off on a challenge combining a limited number of elemental choices into your arsenal. With Quinterra you can develop your army around any elemental colors you choose as you go.

There is great opportunity in that army as well. Most of the time, anyway. You have a core set of elites and minions to start. Minions are available from the start, can be played every turn, pull from a completely different mana meter to drop in, and can often have multiple units on a map at a time. Elites are stronger, have better special abilities, can not have more than one on a map at a time, and have to be drafted by choosing corresponding color tiles to their element. 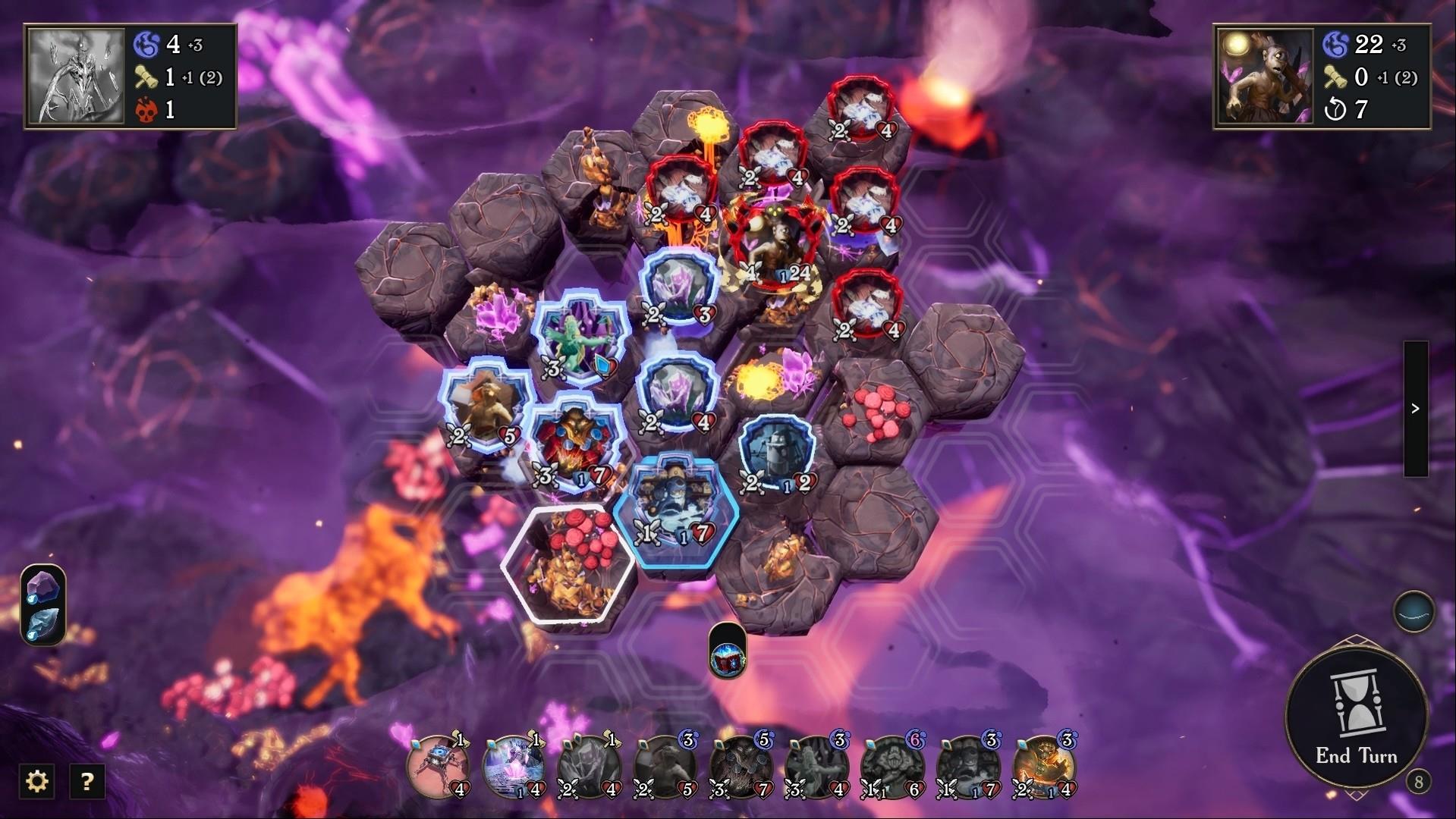 At every node in the map are a few options: usually two battles, one reward for winning at least one of those battles, and maybe a market or something to spend gold won in previous encounters. Your army grows not only in the conscription of new minions and elites, but also by winning or buying armors and jewels to add bonuses or special abilities to the troops. Armors are permanent boosts on a single character, jewels provide boosts for that match when you have the right elements selected to be able place them on to an Elite at draft time. All of these options start adding up to create some very interesting compilations and very fun units to draw down onto the board, most of the time.

Because sometimes it doesn't all come together. Either your starting race just steers you towards a playstyle you're not comfortable with, or the rare interjection of RNG of what troops are available at guilds and markets just end up being more dross than gems. And that's where the game shows its warts. Some runs just end in failure because the synergies between minions and Elites, or armors available for the Elites, or even the board just isn't lending itself to the elemental colors you need to draft your better units or add those interesting jeweled combos to them. 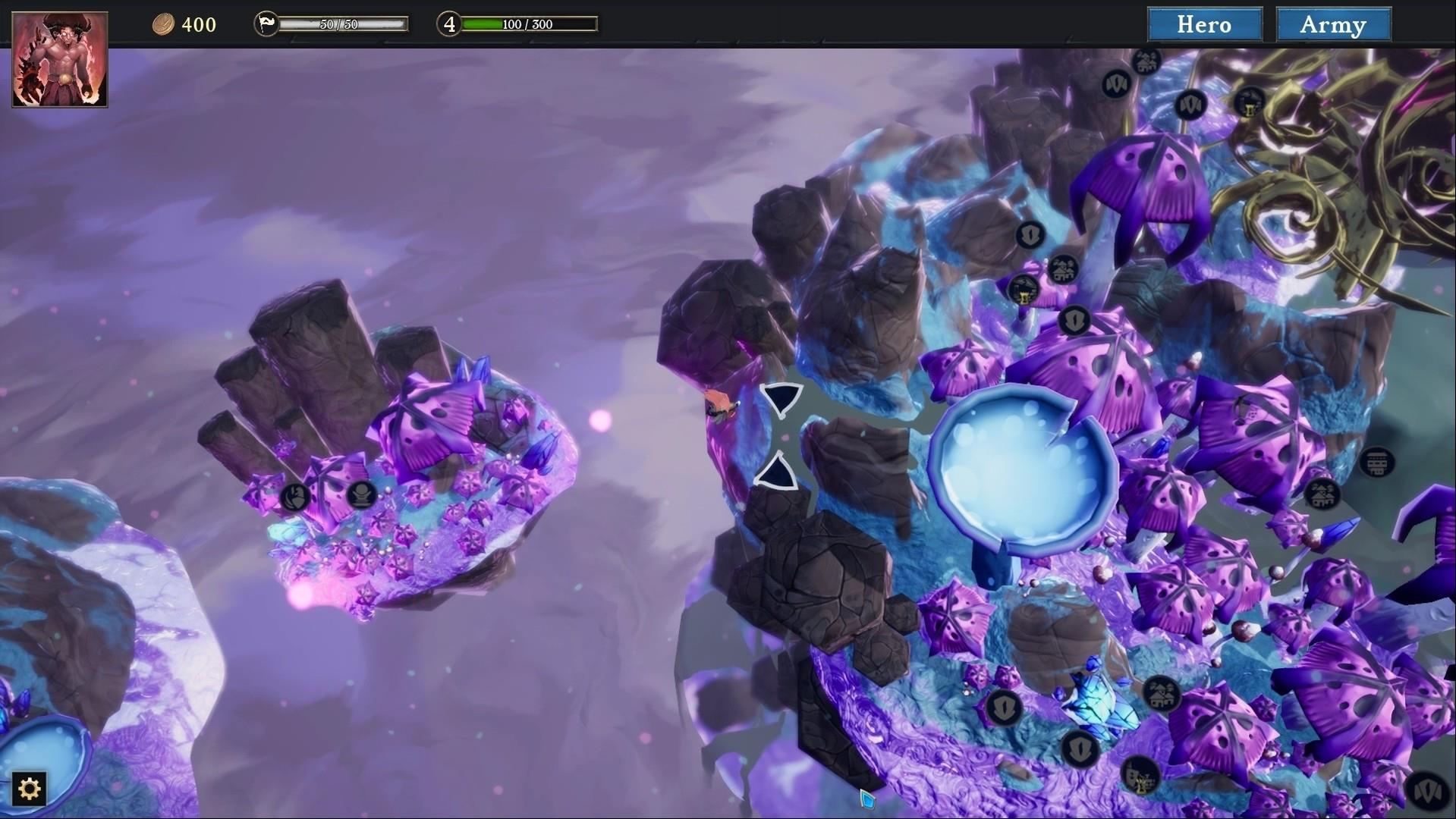 This is still an Early Access game, and for all it is doing right there does seem to be some further balance tweaks needed to the classes in general. Out of the gate you will be gifted with the Lycans, and the very opening elites for that race have some awesome abilities, with other interesting ones popping up often along the way, and synergies abound to be able to build troops strong enough to tackle the toughest endgame challenges. The Imps you unlock as your second race fail to impress entirely, in my opinion. Sometimes the Elites you draft early don't have the right synergies to play with what's on offer later on, or combine properly with the armor and gems you unlock; and then on some runs it all comes together like a well-rehearsed ballet.

You can cover for early choices that don't quite workout. Unlike deck builders, with the army builder you can send your minions and elite to be unused on the sidelines. And unlike deck builders, that does not offer an unfair advantage by stacking the deck because there was no shuffle you're trying to cheat and you're only potentially handicapping yourself by running out of Elites to place. 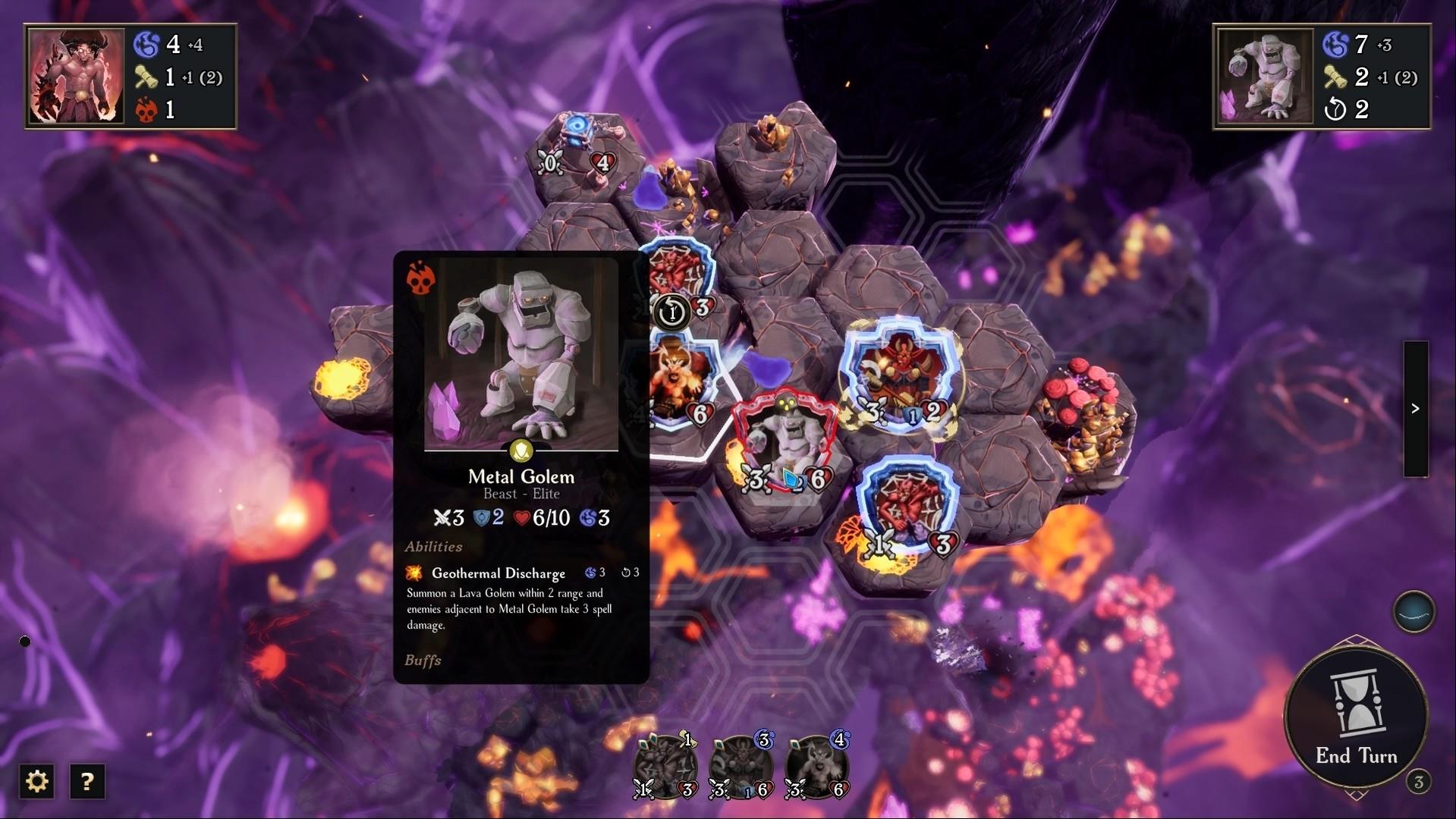 All in all, most runs work really well, and maybe I just lacked the patience to unlock the Imps true power. Not sure. What I am sure of, is the morale meter needs a real rethink. I believe I get what the developers are trying to do here, but the implementation is just a bit...off. See, morale is basically what ends your run when you the meter runs dry. It's not necessarily losing a battle, although that will be a big drain on morale. It's when you lose enough battles, or even simply take too long to complete them. Each failure, or long running challenge, whittles away the final few morale points until the meter drops to zero and the run is truly over.

So, while I think the goal here is to provide players with some mulligans, a way to offer some wiggle room between perfection and something as uninspiring as having three lives represented by hearts along the top menu bar, my problem with the implementation of the morale meter is how it punishes you building a strategy and taking a more cautioned or patient approach to the entire game. It also promotes skipping battles entirely, making mice of men because of an artificial governor attached to the combat mechanic. There are opportunities to refill the Morale meter, but those are too few and far between, and too costly in that you have to trade the excitement of getting a new Elite for that replenishment of willpower. 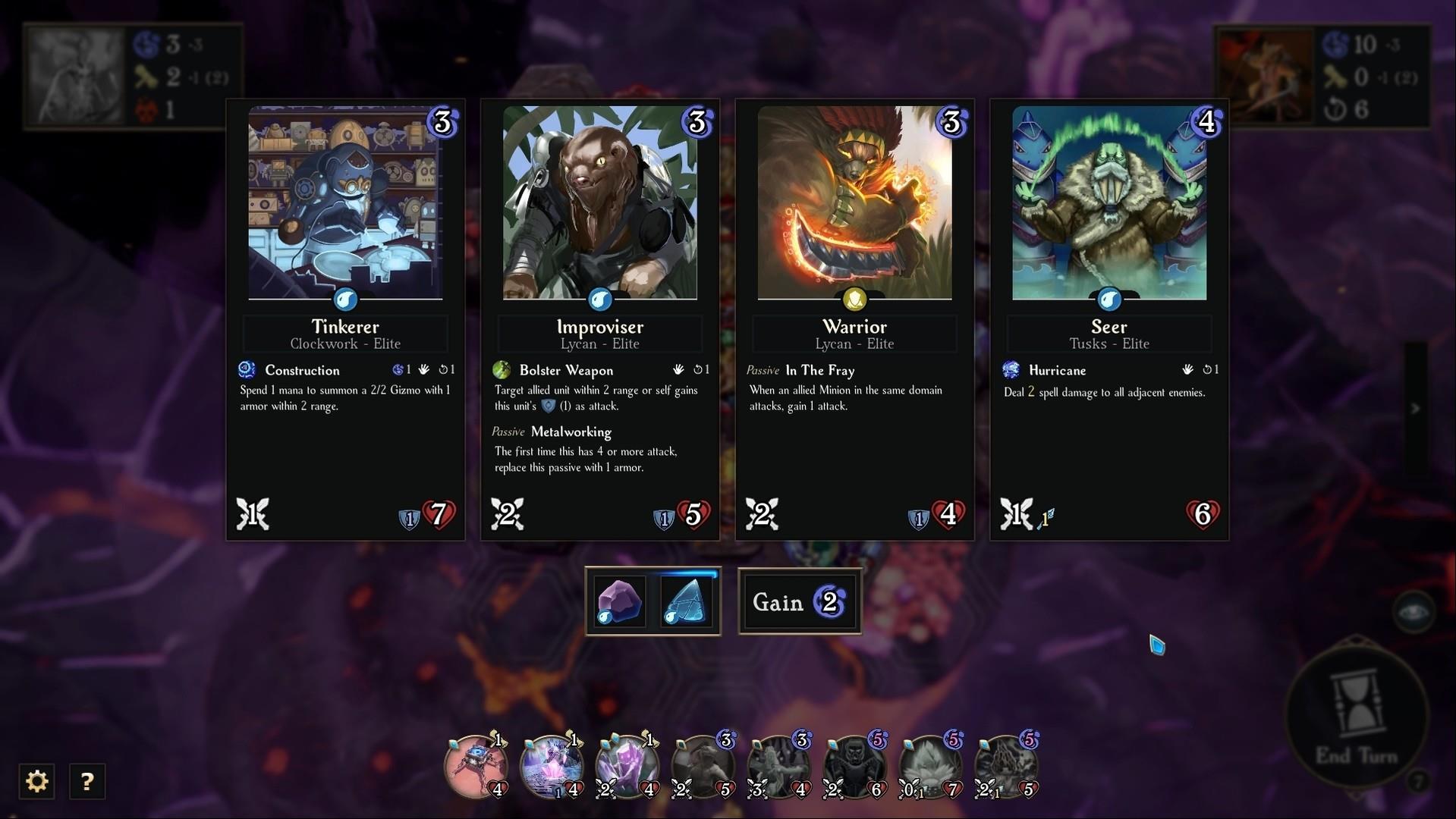 Most runs are fine. The meter will tick down, but death the boss and it will be refilled again to start the next expedition in the following map. Sometimes you hit a defeat in the middle of a map, but can eke out a path to the boss and start anew. However, there was one run that pretty much sums up what's wrong with morale: I recovered from an enemy I didn't quite understand on the first battle and lost, rematched and overcame the challenge, cruised all the way to the boss. I was docked a few more points here and there for battles I won but took too much time to do so, and even had to skip the last node of battle fearing I wouldn't make it to the boss. Felt safe entering the boss battle with a few points left in the old morale bank, only for the match, and my entire run, to drop mid-battle as the meter ran dry.

What the actual flip?! My army was probably two rounds from taking down this bruiser and victory was assured at that point with total map dominance. But my game came to an end because what? The army had a sad all of the sudden?! It was as cheap a death as I could imagine. It just didn't feel good man, or rewarding of my time and really made me struggle to jump back in for another run after that. It also fosters a gameplay that only half rewards strategy and board dominance, preferring instead to cater to rush tactics. It's forced and, at times, very cheap and not very fun. 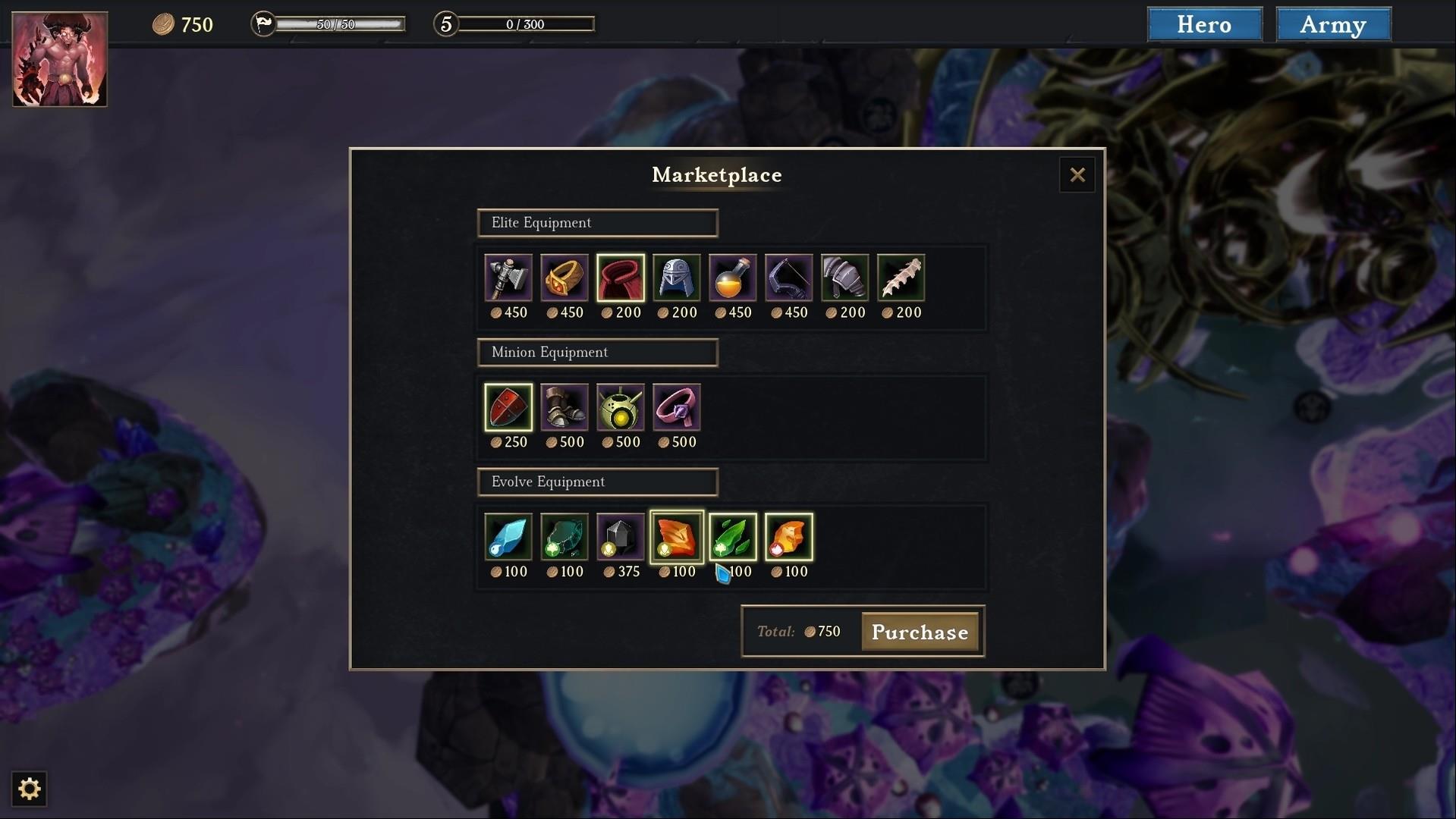 I literally just reviewed Trials of Fire, so I have seen morale (or in their case, willpower) done right. It serves the effect of not letting players get too strong wandering around and breaking the difficulty curve, but is not overly punishing and gives the player opportunities to bump the meter back up regularly. It's another tool in the journey, not the main loss-condition of the entire game. And in no reality should a player be booted mid-fight from a boss battle because the imaginary meter hit zero.

Quinterra is not a collectible card game, and freed from those bonds it lets loose as a strategic army builder. You aren't ruled by the RNG of a deck shuffle, and have much more agency over your choices and strategies, so long as you are lucky enough to construct an army that has the synergies to tackle increasingly difficult challenges. Quinterra brings these really interesting concepts to Early Access, but suffers from some disappointing balancing issues. But isn't that exactly what Early Access is for? Iron out these wrinkles and Quinterra should have a bright future ahead of itself. When the battles were humming I enjoyed it immensely, and it hummed much more often than anything else.