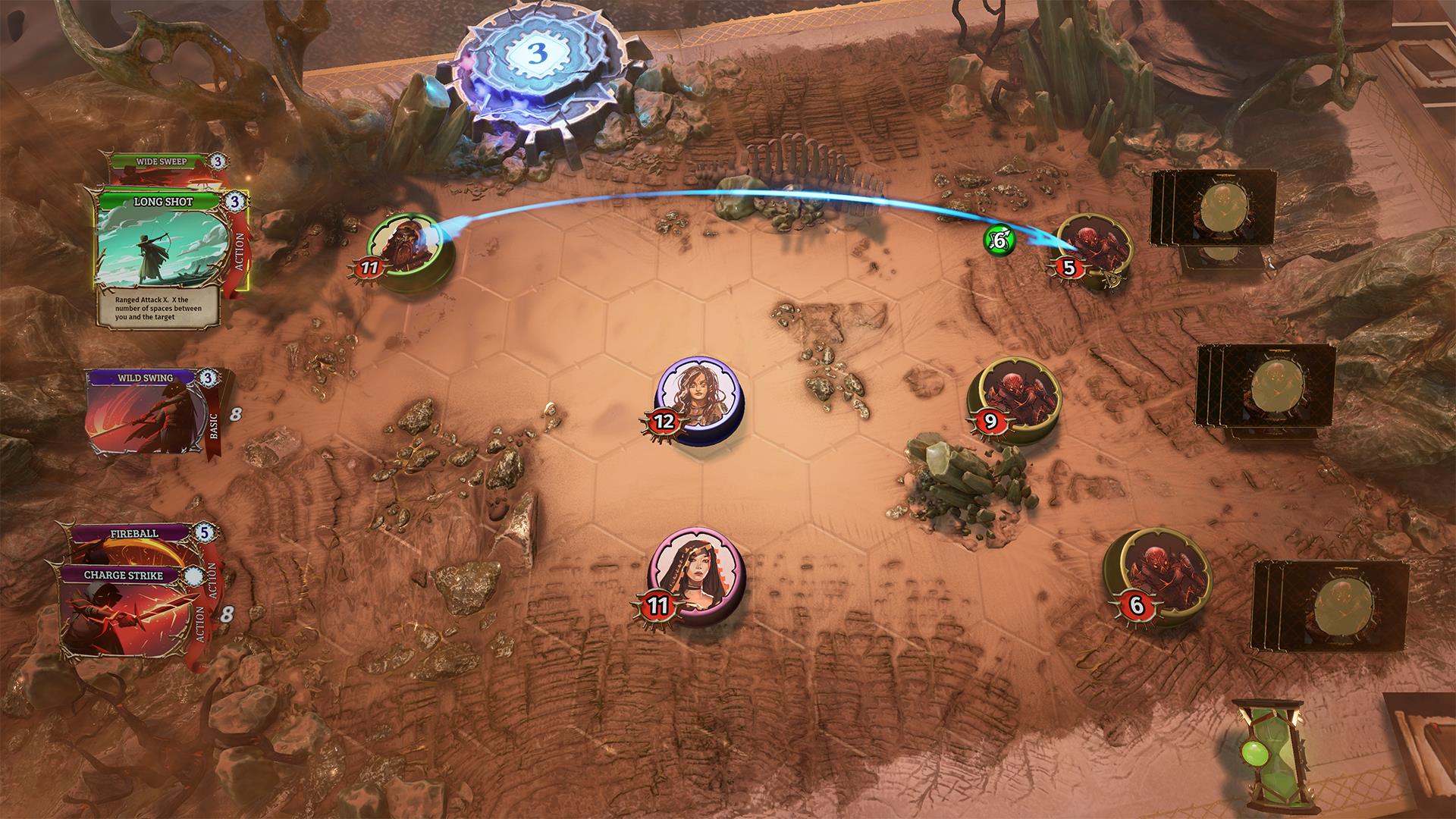 Always up for a good deck-building game, what initially piqued my interest with Trials of Fire was this idea of a quest, a tale unfolding against the backdrop of a harsh world ravaged by "the Cataclysm." It's all right there in the Launch Trailer.

Diving in, I was rewarded on this interest with an incredible deck-building roguelike with layers of depth and strategy. Rather ironically, I also got a story that basically cut off at what felt like the end of only the first chapter in a novel. As far as bait-and-switches go, it's a welcome trade, but an odd one nonetheless.

Let's start with the good. The gameplay and deck building in Trials of Fire is top notch. Even before you kick off your a foray through the land of Ashe you have a stable of heroes to select for your party. Armored warriors to tank damage, ranged archers, sorcerers, support classes, and various hybrids make up the nine classes in the party roster. Each has strengths, weakness, and combinations that can be paired from their various skills. Use the Warrior's ability to absorb another character's damage for a round and then drop a shield on them from the Elementalist's spell deck and you've got two characters free from damage for an entire round. 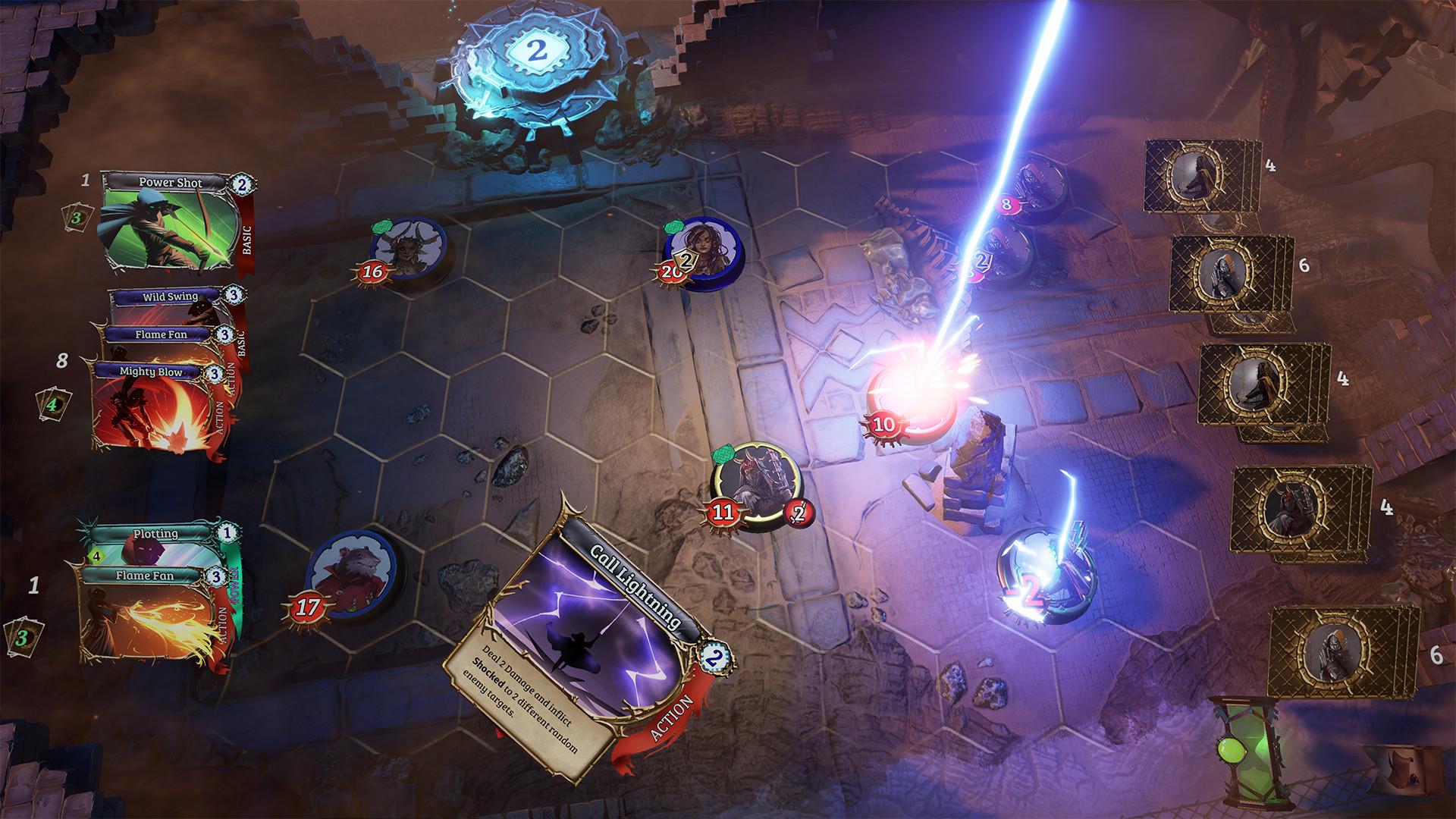 The roster overall is very good and presents a wide variety. While there were a few characters I rarely used, it was not because they were uninteresting, it was more because I was afraid that my playstyle would lack the patience to build up to the payoff they promised. I tend to be a cautious player with deck building games. But simply constructing your party is that first layer of depth, and with three characters to choose on every run and those combinations they can form, it ended up on the deep end of the depth spectrum with respects to those choices.

Then, once you actually set out, you have essentially an open world to explore. The world is scarred and somewhat barren, but is pocketed by icons along the journey. These icons might be towns to shop, rest, and recover in; ruins to explore for loot and possible battles; terrain to mine for resources; or could be part of your main objectives or side quests you pick up along the way. Each step slowly drains your Stamina meter, each rest restores a chunk back. Choose to rest in a town for maximum reward, rest anywhere in the wasteland to push at least a little stamina back; but watch those food reserves. When you run out, so will your ability to rest. 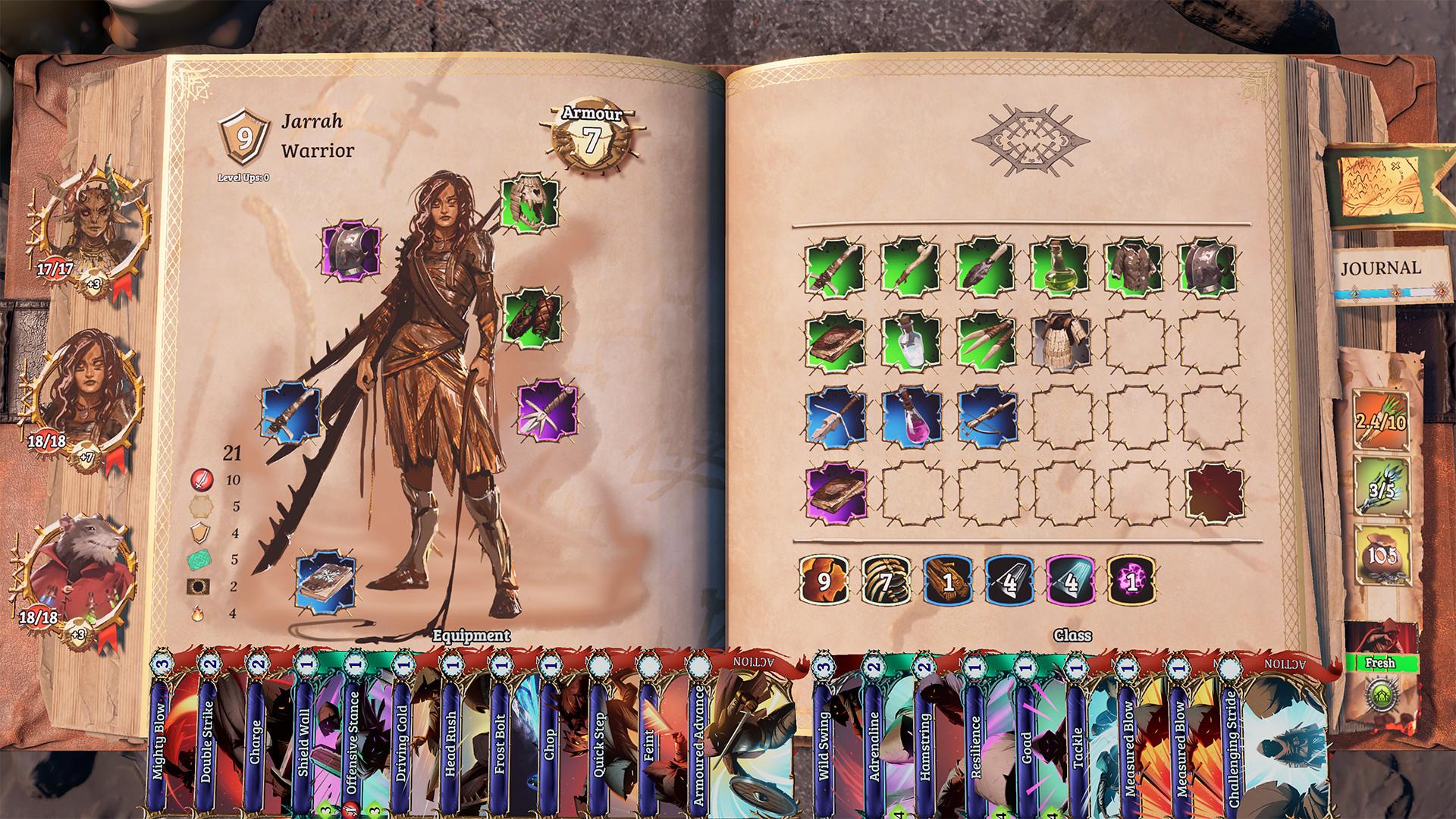 And rest is important because losing too much Stamina will stack your deck with fatigue cards—wasteful, unplayable dross that can really derail an entire round of combat. You also have a morale meter to maintain that leads to better rewards and even the will of your party to press on when completely drained. The idea being: you've got an open world to explore but also a stated goal to accomplish. You could just abandon the quest and wander from loot to loot growing stronger and stronger until the difficulty curve was shattered, but the morale meter curbs that and keeps you on task.

Once on the quest, you will frequently be rewarded from both combat victories and decision trees in other interactions with loot. Sometimes that loot is the food that keeps the quest from stalling out; other times it is upgrade materials; but often it is armor, items, and weapons that are used to build out your heroes' decks. Each hero has a base deck of common abilities: some movement cards, some attack, and a few support-type. But the most powerful cards are directly attached to either the weapons and armor you pick up along the way, or through leveling up after hitting certain play milestones like boss battles and other progression. Each class has only certain archetypes of weapons and armor they can equip, but many of these classes are spread across many character types. The Warrior uses swords and clubs, the Hunter, bows and knives, the Witch bows and clubs, etc. So even within a hero-type you can still build their abilities around a playstyle or even just opportunity depending on what you've unearthed through the loot and level ups. Basically, more depth. 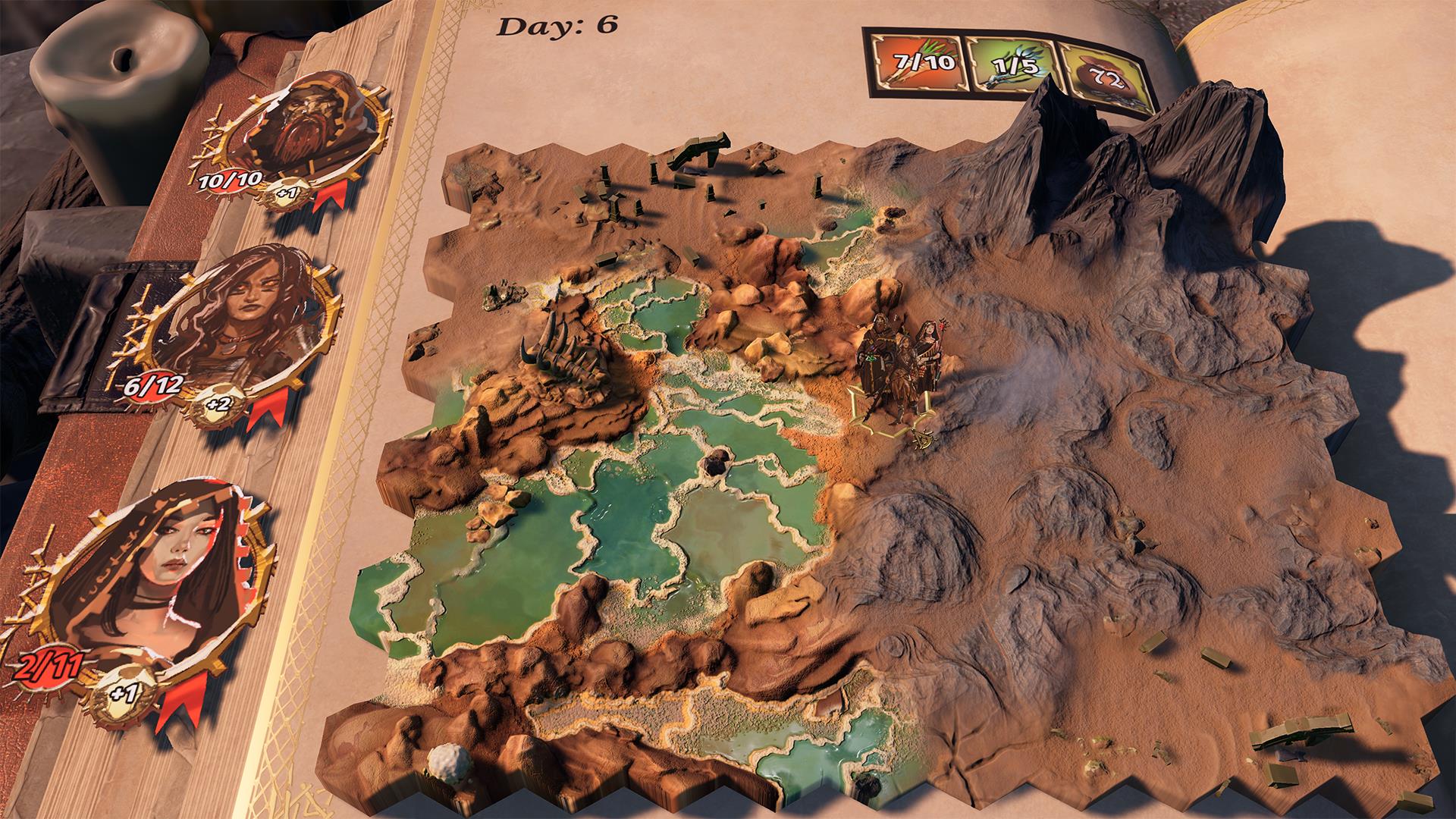 Also along the way there are a few ways to whittle down the less valuable cards and power up the cards themselves. Level-ups of the heroes provide not only an opportunity to swap out an existing one from the base deck with a more powerful card, but you can also upgrade cards to make them cost less or hit harder. Crafting materials can remove a card from a weapon or armor piece. Say the bow comes with three attack cards with it but one is only really useful when paired with a summoning Hunter. You can upgrade the bow to remove the card from the item, and subsequently your deck entirely. So now you have meaningful ways to continue to mold the deck to whatever synergy you're aiming for in that run. Basically, even more depth.

And we haven't even begun to actually start talking about the combat itself. It plays out on a hexagonal map with slightly random placement of barriers and maybe even an elemental modifier like lighting strikes that might crash down on indicated titles at round's end. The crux of the fight really is in managing Willpower, or perhaps more accurately, managing the scarcity of it. Willpower is the ability to actually play a card. Some cards cost nothing to play, some even give you Willpower to play, but most cost one or two Willpower to be able to lay them down on the board with the most powerful ones drafting even higher. Unlike many deck building games, you start each round with zero Willpower. You can't even move around the hex grid of the map without expending Willpower—one Willpower for every two tiles of movement. You can, however, discard cards for Willpower. And that ends up being the key to managing your combat rounds. Well, that and deciding which single card for each hero you would like to hold onto until the next round. Each round sees you draw three and holding one from the last round gives you four to start in hand on the next one. This can absolutely swing a battle one way or the other. 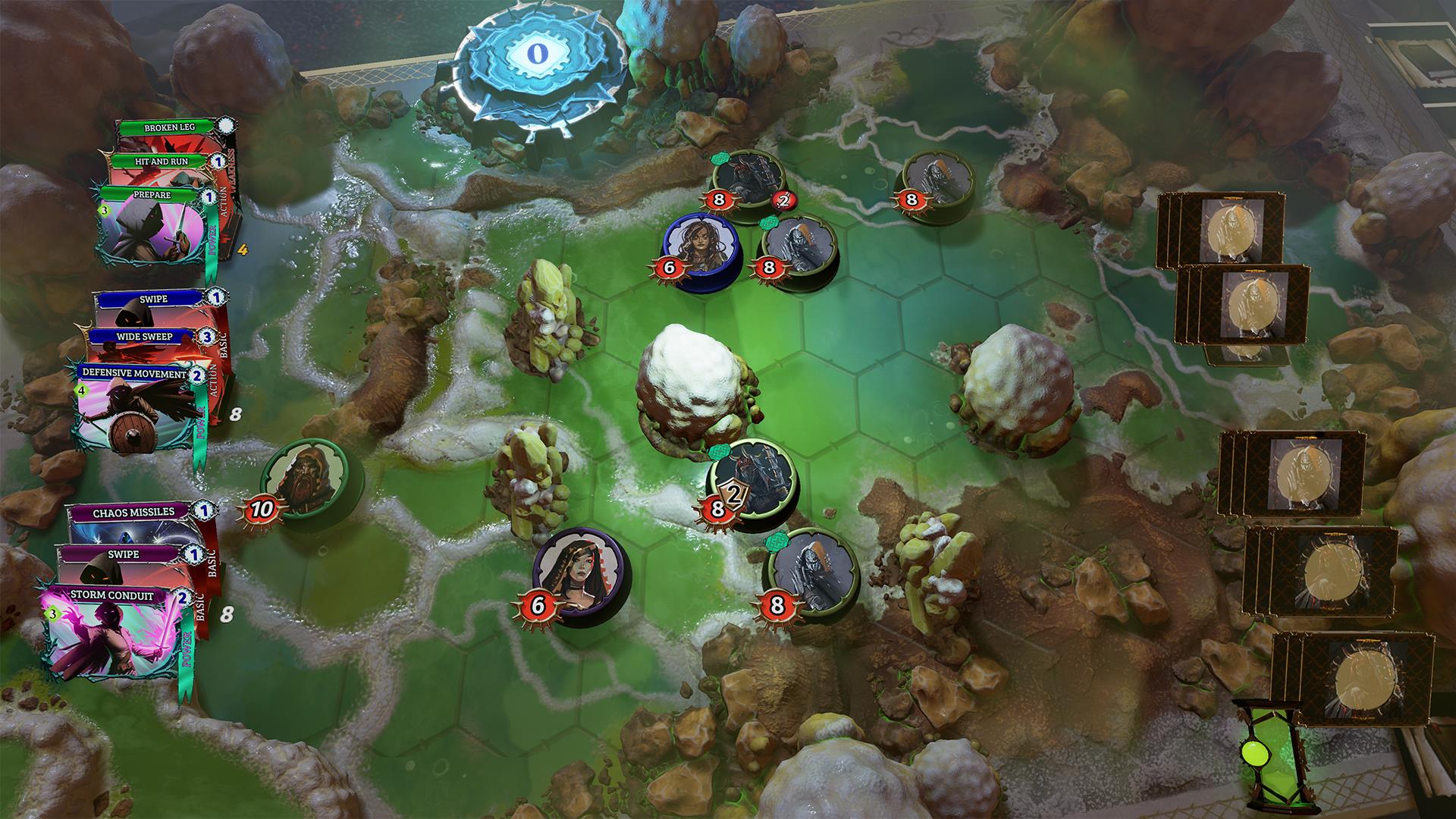 What I found myself utilizing to the best effect was a Hero combination of one tank to absorb damage from foes, one ranged attacker to either volley arrows or magic from a safe distance, and one character usually in support who spend as much time just tossing cards to feed Willpower to the other two as they did actually supporting them meaningfully from their deck itself. There is so much you can do in a round of Trails of Fire, but do you have the Willpower points to actually pull it off? Typically not. So managing round to round, saving that card to use the next one, whittling away at enemy health from afar as they cross the map, preparing for your attack round before the enemy has even arrived to engage yet are all key. The combat presents yet again more depth as all of these factors and strategies come into play, all the while managing re-draws, dropping perks on heroes, working your positioning not to get sucked in or maintain a line of sight to actually sling arrows, it all comes into play.

Combat is immensely satisfying as well despite the board being represented by a bunch of pogs on a grid. Hit Points are low, so, devastating blows are few and far between. But working positioning and combos can greatly pay off. When you do defeat an enemy their game piece shatters like dropped porcelain. The arrows sling through the air and land with a visible thwump. Bosses all have unique mechanics which amps up the challenge. There is a simplicity to the style of the presentation, but that only belies the complexity of actually pulling off a successful series of combat wins. 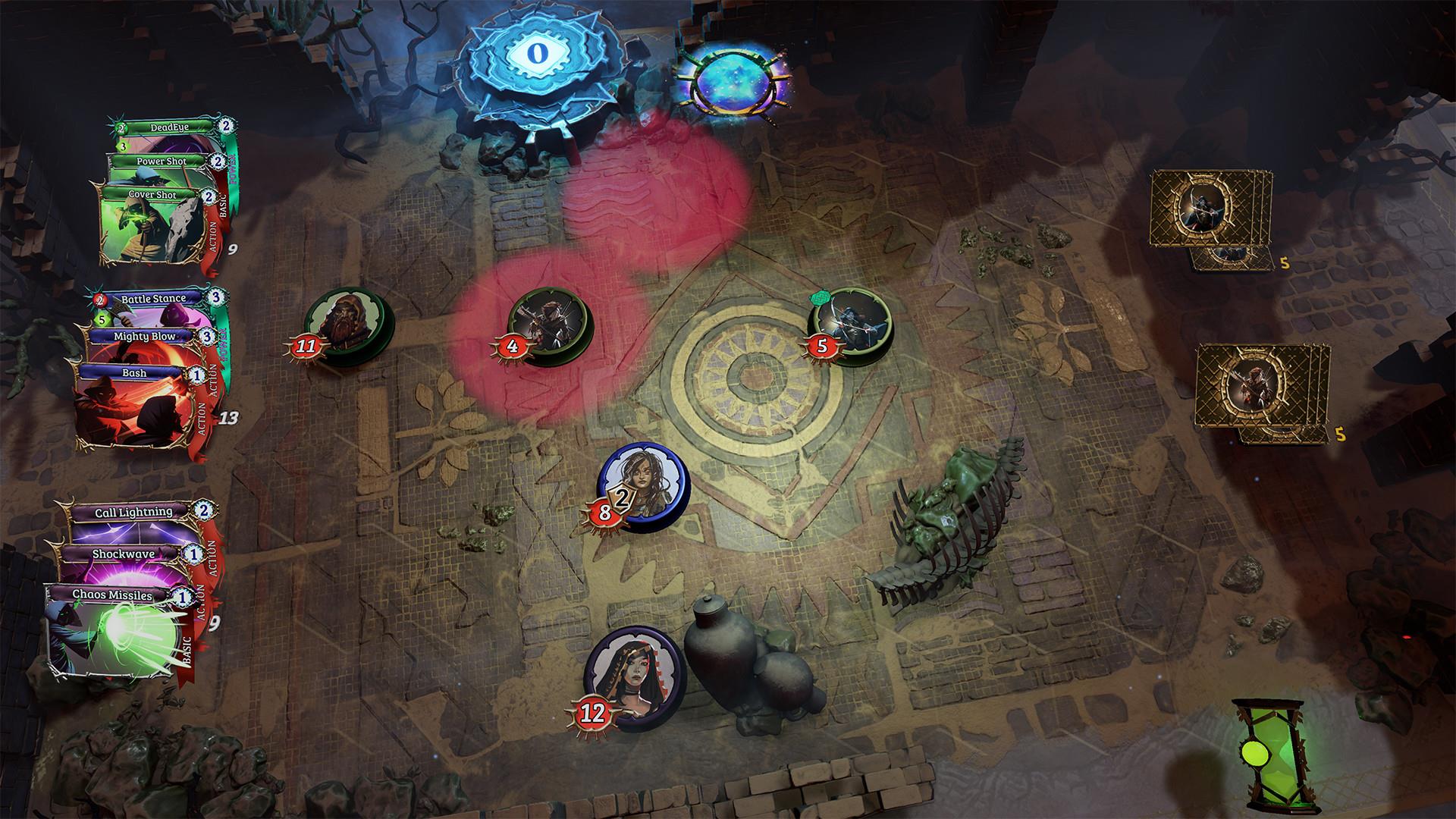 My only gripe is that I was hoping for that epic tale of a long quest for a more hopeful future, the one promised in the teaser. And then three boss battles into the campaign it all screeches to an abrupt and unresolved end. I was hoping at launch, as the game moved from Early Access to full release, there would be more to it. And while there were over three dozen card updates based on Early Access feedback for balancing, and there was a new hero introduced to the pool, there was sadly no new chapter added to the quest, which might run you an hour and a half or two hours total to complete. There are yet loads of side story quests, and challenge runs, and other game modes to engage in. So plenty of other ways to play, but the story does not unfold.

Trials of Fire gets everything about deck building right. It presents a great depth of play with layers of strategy. The one place it misses the mark is that it only tells the first chapter of an obviously broader tale, and left me feeling like there should be more to it. There are lots of ways to play and other runs to launch from he title screen—so there is replayability; but I really long for them to deliver on the world-building they expertly lay out. Considering the budget price tag, it is still incredible value for money. I just hope they can deliver the rest of the episodes in what I imagine must be future DLC or something. What's disappointing is that whatever that expansion plan must be, it is in no way clear about what those next steps actually are. We are left with simply great depth and gameplay betrayed by a story that only reveals its preamble. 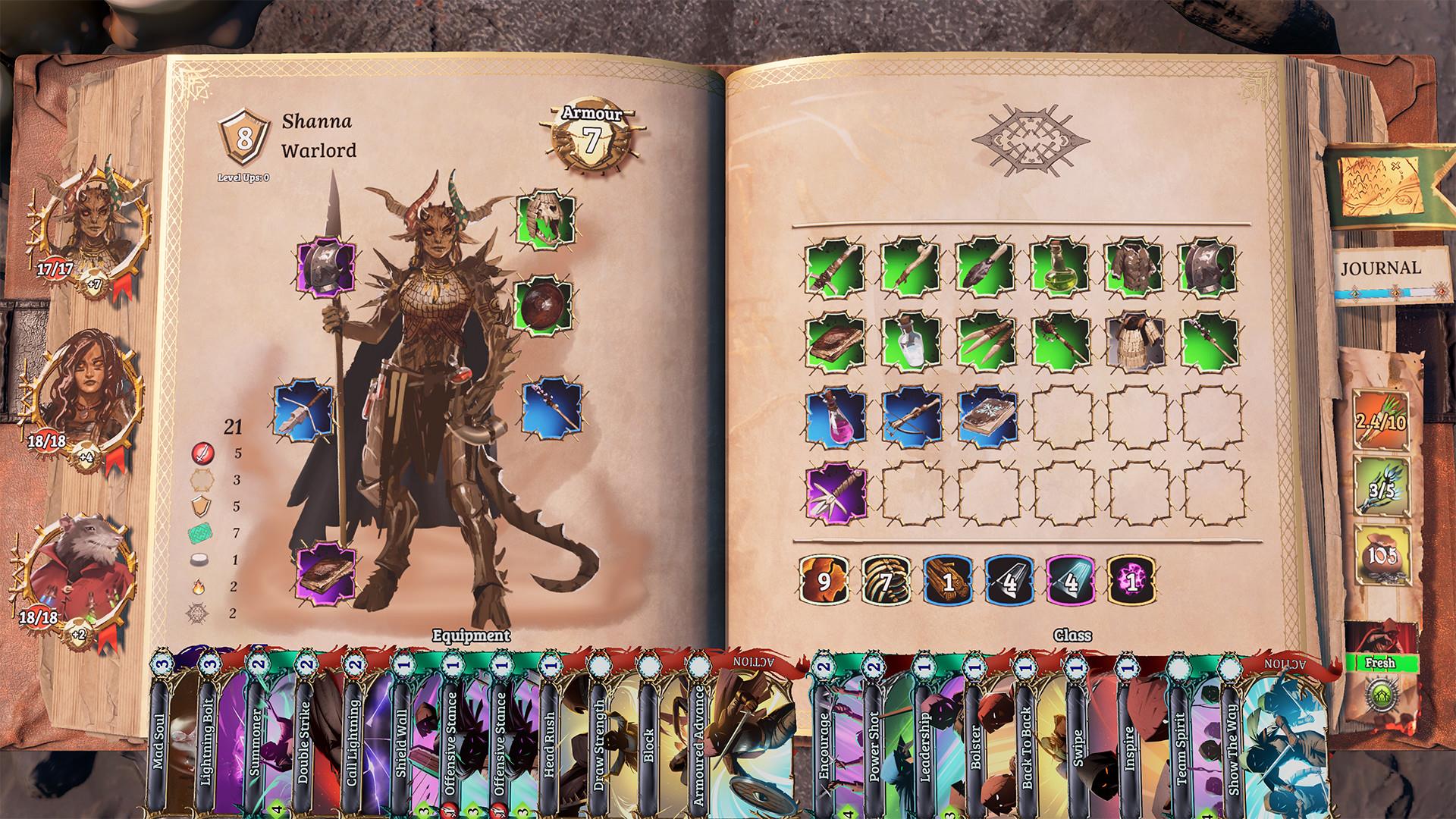 Trials of Fire is a fantastic deck-building game. It is enhanced by also acting like a rouguelike for endless replayability, and it crafts a rich world around its characters. Trials of Fire only disappoints on one front: that the story it actually tells seems more like a teaser than an epic. While I can't complain in that it is priced like a single episode in a longer saga, I am left wanting for the rest of the saga. Maybe that's altogether not the worst thing...