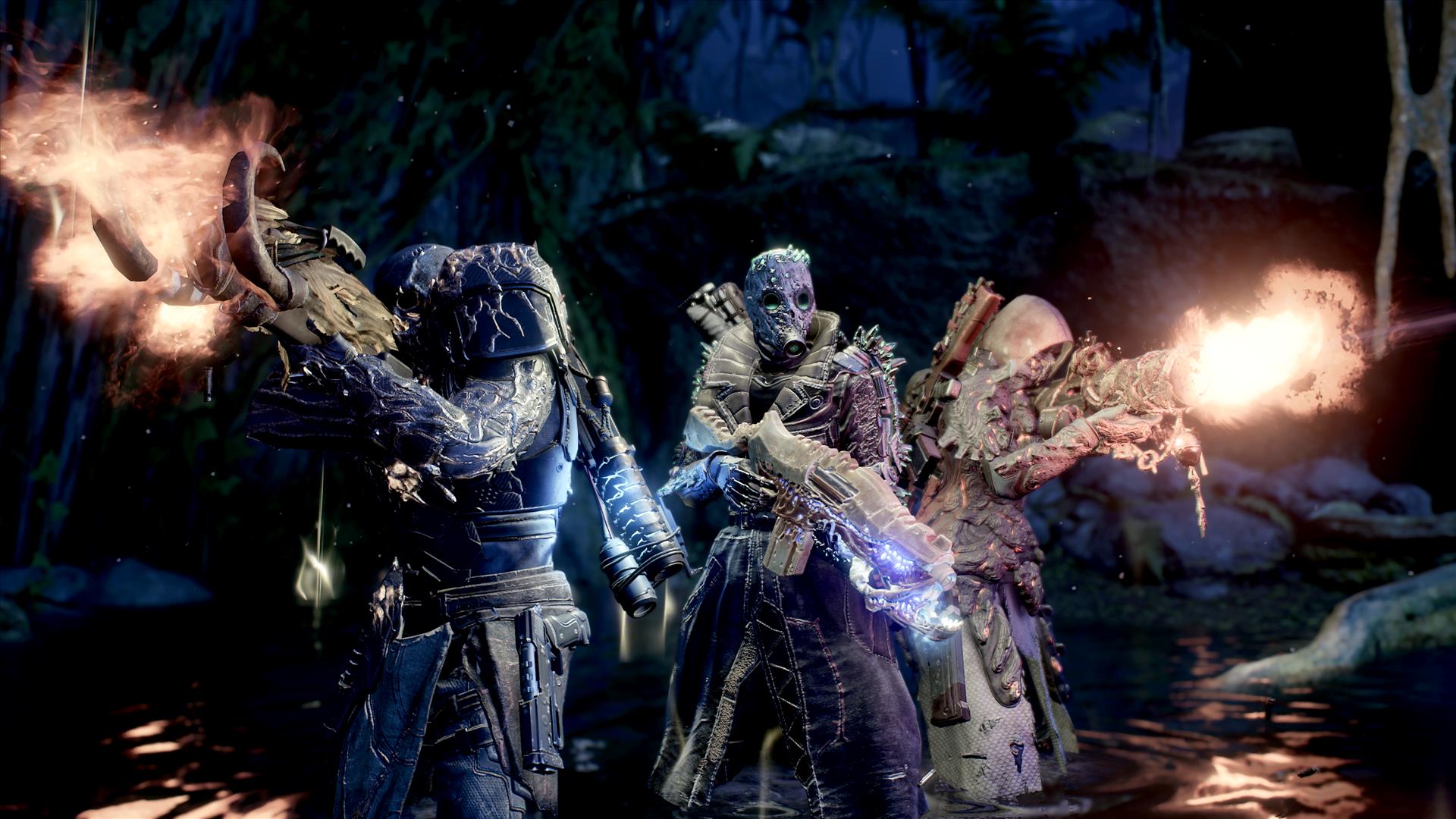 If you asked me to sum up my impressions of the Outriders demo, I’d summarise as follows: Outriders lacks the technical quality of other looter shooters à la The Division, Destiny, and so on. But, I’m undeniably having fun playing it. What it lacks in technical quality, Outriders makes up for in fun, high-octane gameplay. In Outriders, unlike other games of its kind, healing isn’t something done behind the safety of cover. Instead, healing is achieved through aggressive play and tactical use of an Outrider’s devastating abilities.

Herein lies the secret to Outrider’s enticing recipe. It’s fun. More so when you’re playing with friends and synergizing abilities to devastating effect. But, even playing solo, Outriders keeps making you feel like a complete badass while you chain together abilities that pack quite the punch. Between the Pyromancer, Devastator, Trickster, and Technomancer, there’s a class to fit every playstyle. Personally, the Pyromancer was my favorite of the bunch. They’re able to incinerate enemies and chain together abilities thanks to short cooldowns. 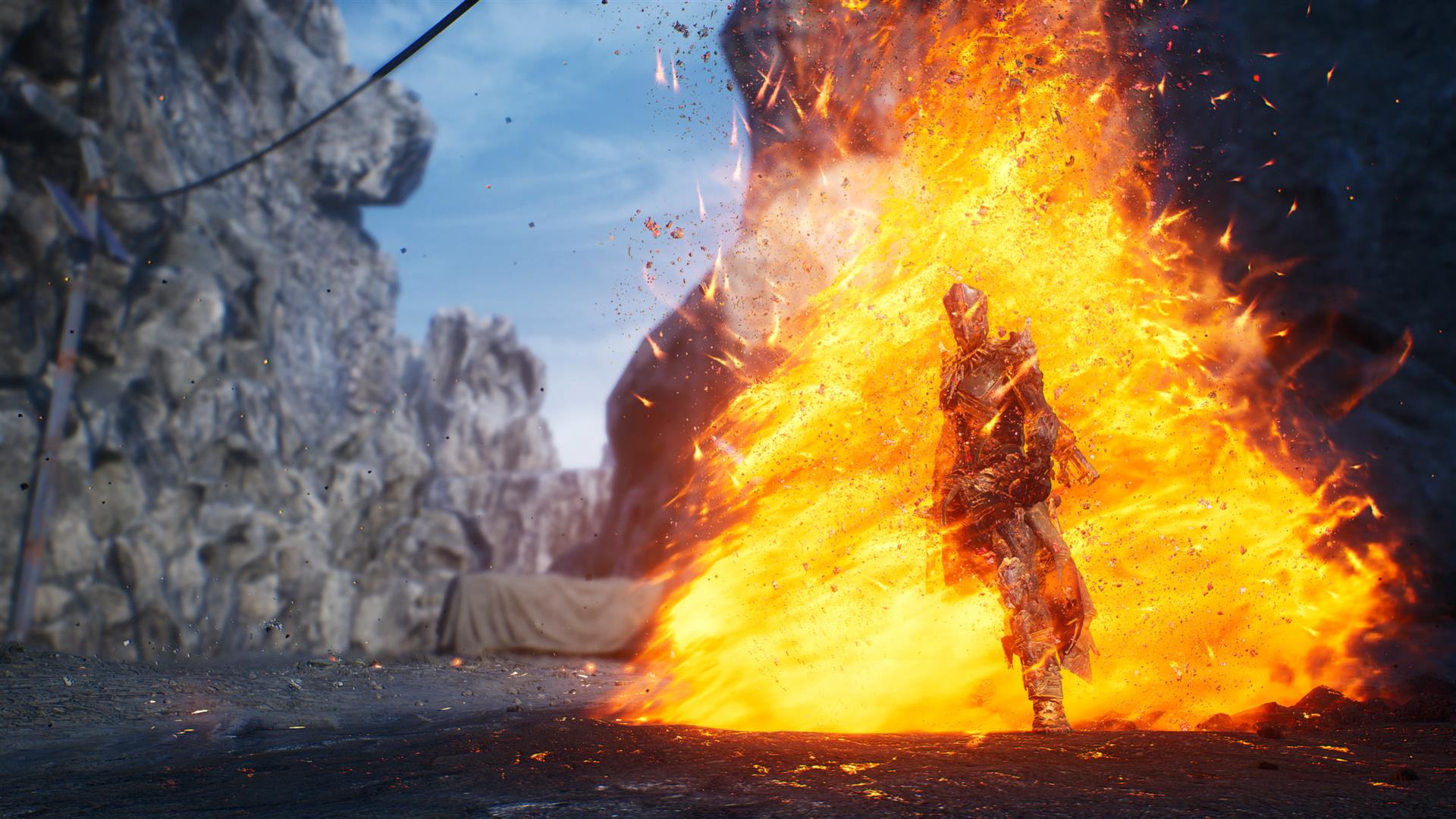 I played through the entirety of the demo with all four classes and they’re all pretty well-rounded. The Pyromancer is a medium-range class that can conjure fire. They recover health whenever enemies marked by your skills are killed. The Devastator is a close-range tank class that manipulates the earth beneath their feet. They recover health from slain enemies that stood too close. The Trickster is another close-range class but with a focus on damage-per-second by bending time and space. The Trickster has less health than the other classes and heals by killing enemies in close proximity. It’s also the only class with a shield. Lastly, the Technomancer is a long-range support class using deadly gadgets. They heal through a percentage of damage they deal.

It’s a good thing that the classes are so much fun to play because a lot of other aspects aren’t as accomplished. For instance, from the limited missions in the demo, level design has been far too simplistic and linear. Games like The Division fill arenas with such a high level of detail and complexity that each one feels fresh, despite them following similar patterns. Outriders, on the other hand, simply doesn’t do enough environmentally, vertically, or aesthetically to freshen up one level from the next. Of course, there’ll be plenty more levels to explore in the full game, so this is subject to change.

On that note, however, I did like how Outriders delivered its side quests. Instead of just collecting a bunch of side quests from the main hub (there are a few of those) Outriders also presents you with side quests while following the main quest. This makes these smaller quests feel a lot more integrated in a similar vein to RPG games than other looter shooters. The side quests I played sometimes featured mini bosses and, as well as being enjoyable, also presented players with some tasty loot, so they’re well worth venturing off the beaten path to do. On the topic of loot, there’s a decent variety of weapons and clothing in the demo, with blue rarity gear providing special bonuses that must be carefully considered to equip items that synergize with your equipped abilities.

Outriders falls short when it comes to certain technical aspects. Right off the bat, I’ve dealt with up to a dozen disconnects in one session, ultimately forcing me to give up trying that day. Of course, as a free demo with no preorder requirement, there’s probably a lot of people playing right now, so perhaps that can be excused. It is, however, something I hope isn’t encountered nearly as often in the full game next month.

There’s also a multitude of technical shortcomings that will be glaringly obvious to anyone that’s played higher-quality looter shooters like The Division or Destiny. First of all, what’s immediately noticeable even in the opening cinematic is the jarring camera shake. Boy oh boy that camera shake, combined with the overbearing motion blur, made me feel nauseous after a while. There’s also a lack of camera and controller settings, with aim acceleration in particular feeling off. Not being able to customize these settings is an oversight in this day and age. You’ll get used to it somewhat, sure, but it’ll never feel as right as if you were able to tweak it to your specifications. 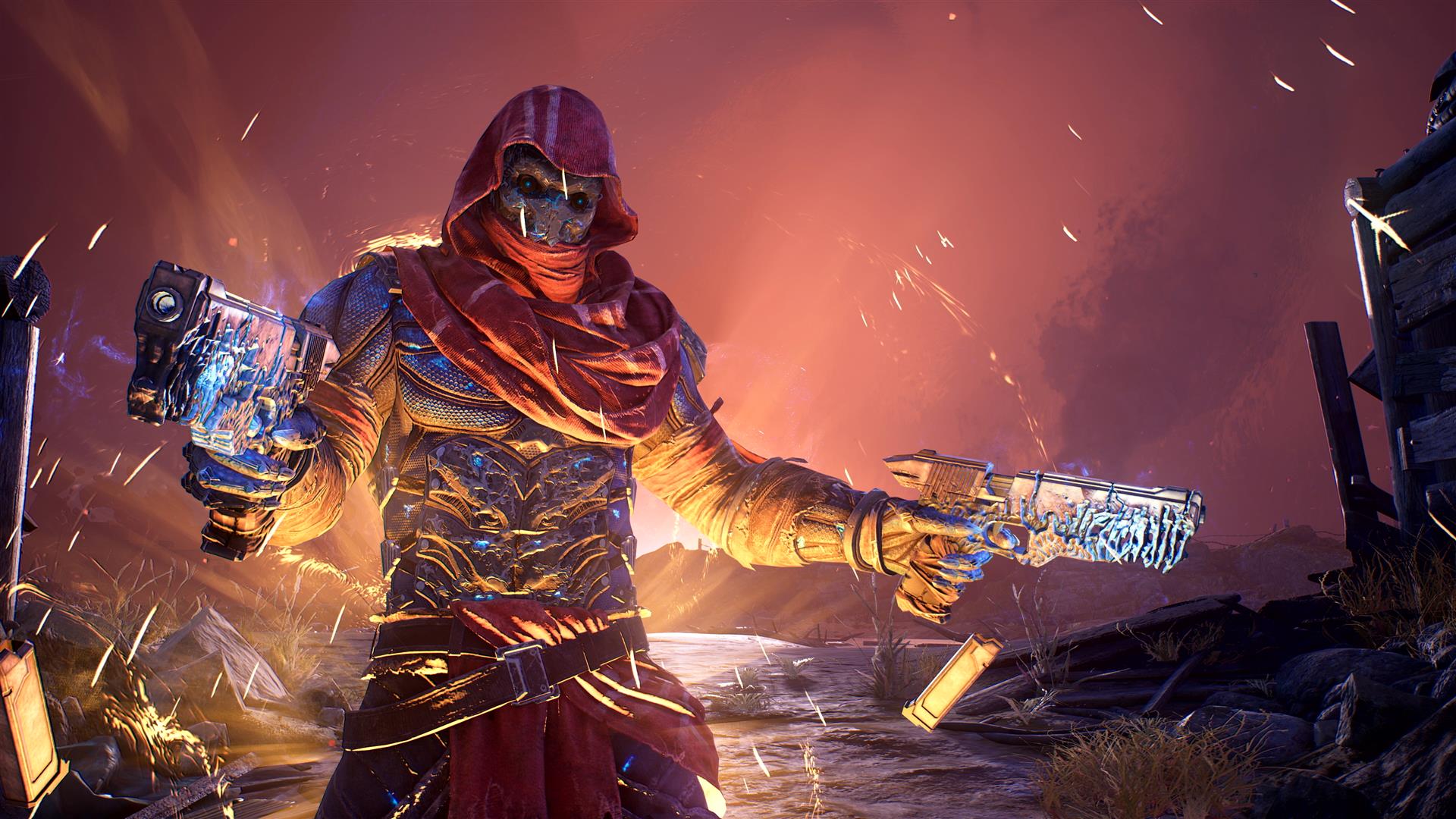 Outriders looks visually striking in the opening scenes when your character encounters anomaly storms. From here, however, the visuals end up looking blander when you make it to the first hub spot. Fidelity wise, Outriders doesn’t look that great. On PS5, it runs at a sharp 4K resolution and that definitely helps, but the underlying graphics just feel outdated. Thankfully, Outriders also runs at a fluid 60FPS on PS5 and I didn’t notice any frame drops. I hope that when we experience other areas in the full game that they’ll be more aesthetically creative.

As far as story goes, it’s a fairly run-of-the-mill sci-fi story but surprisingly intrigued me. After humanity is forced to leave Earth in search of a new home, they settle on colonizing a new planet called Enoch. As an Outrider, you’re sent with the first wave to step out into the wilderness to build a home for the future of humanity. Normally, looter shooters don’t have the most gripping stories but Outriders does appear to have its hooks in me. The character creator, however, is bitterly disappointing. There’s only a few options to choose from as the suite is almost as simple as it gets. 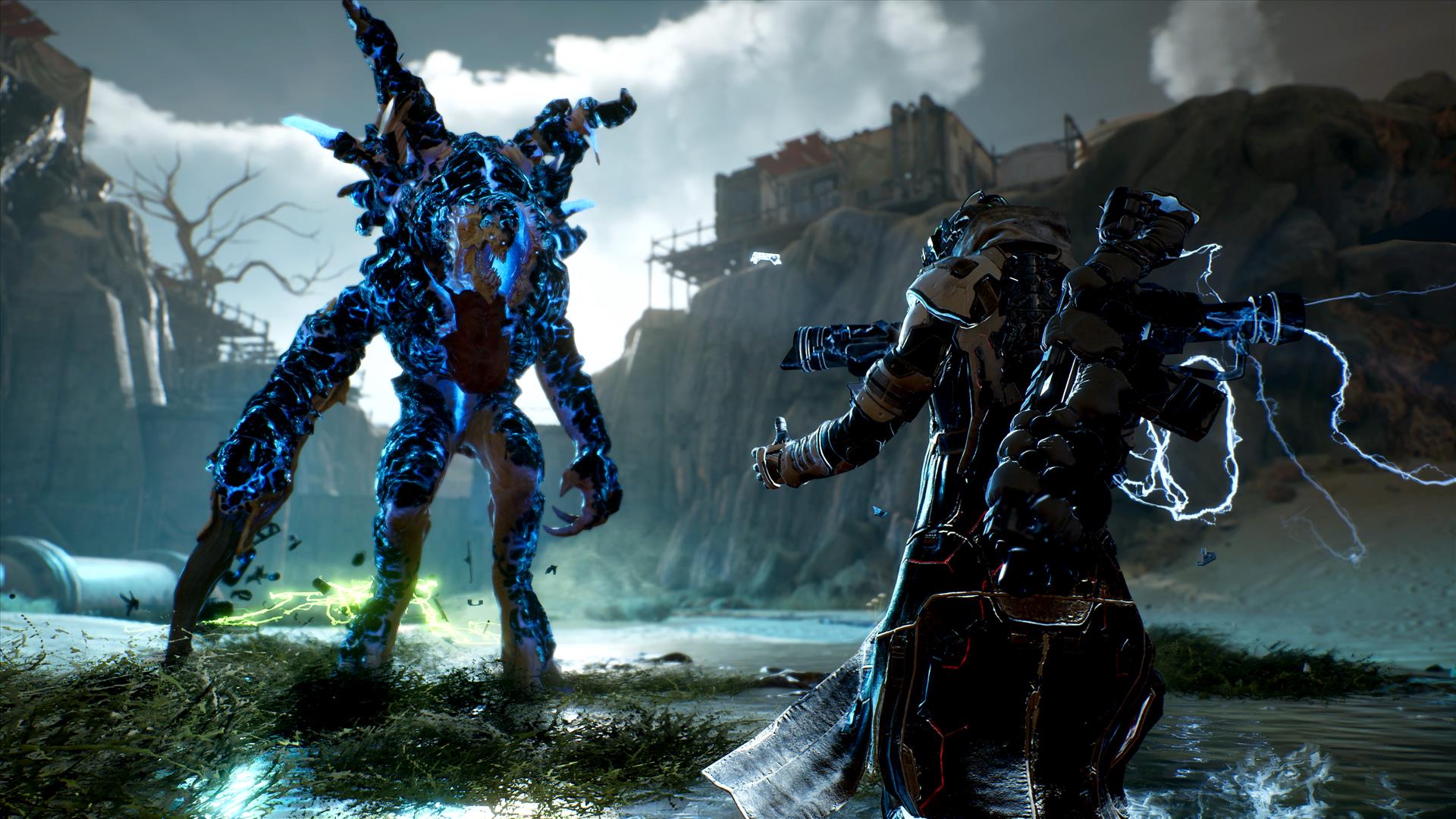 All in all, Outriders might not replicate the quality of similar games like The Division or Destiny, but it does get the fun factor right. Had it not got that crucial factor right, my impression of Outriders would perhaps be much harsher. As it is, one can overlook some of the technical shortcomings as they have fun playing as a complete badass. Again, playing with one or two friends is definitely the way to go here if you can as synergizing different abilities to devastating effect is what will entice you to keep playing Outriders. There’s enough good stuff in the demo to make me want to play the full game, but I’m hoping there’s some improvements before then.

The Outriders demo is available now on PS5, PS4, Xbox Series X|S, Xbox One, and Steam. For more on Outriders, check out our own Eric Hauter’s article here to get the scoop on what Outriders is all about. Also, feel free to check out my own piece here on five reasons why Outriders should be on your radar.