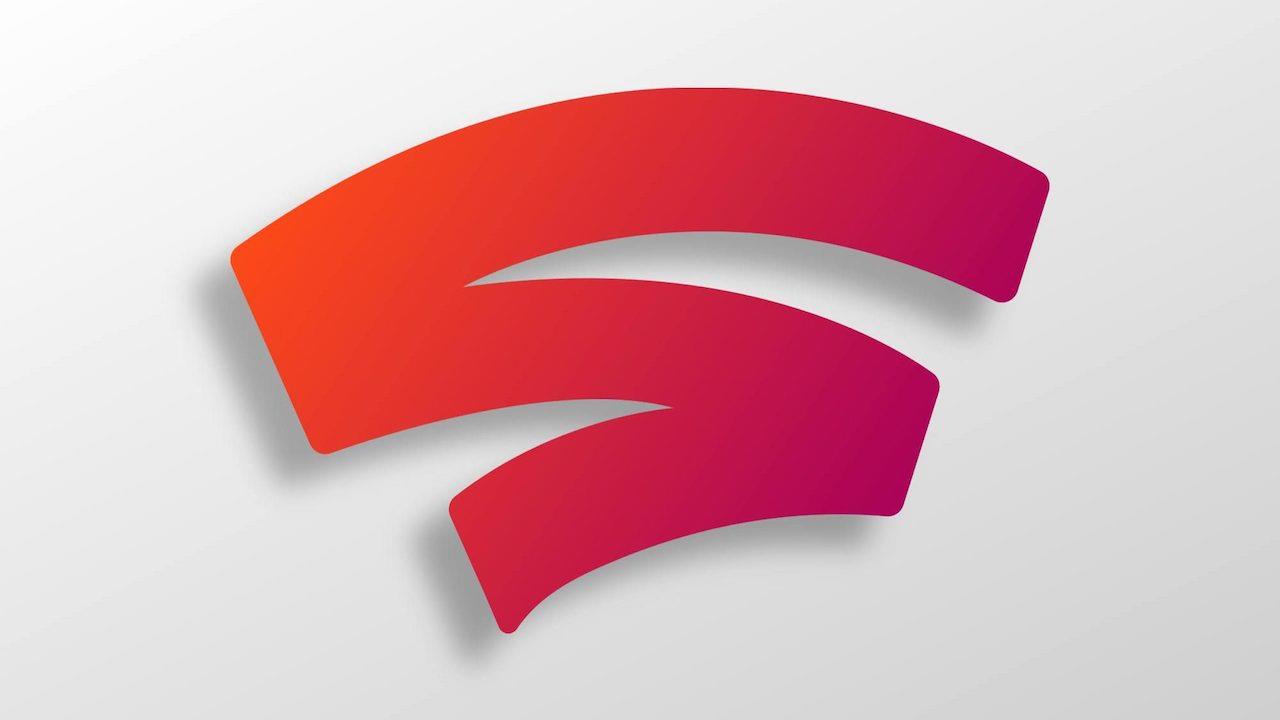 Unsurprising true confession time: I am a Stadia fan. I have two Stadia controllers, which I feel are some of the finest controllers on the market. I play Stadia on my PC, on my phone, and on my living room TV, when I can boot my kids off of Netflix long enough to get a session in. My Stadia library has well over 100 games in it, many of which are Free-with-Pro games that I have never fired up. As a game reviewer, I sometimes end up with multiple copies of the same game on several platforms. When I have the option to, I always default to playing on Stadia. The ability to bounce between screens is just so convenient when I am trying to pound through a giant game in one weekend.

Of course, Stadia fandom means different things to different people. Some Stadia fans are ride-or-die loyal to the platform, forsaking all others in their devotion. That is not me. I write for a general gaming site, so I also play on PS5, a PS4, a Nintendo Switch, Amazon Luna, NVIDIA GeForce Now, an Oculus Quest 2, and I’m thinking about an Xbox Series X as soon as they become common enough for me to pick one up without spending too much energy on the hunt. I love those platforms too, just as much as I love Stadia. I love gaming in general, and I’m willing to swim anywhere the water is warm. I don’t think this makes me less of a Stadia fan – but others might disagree with me. 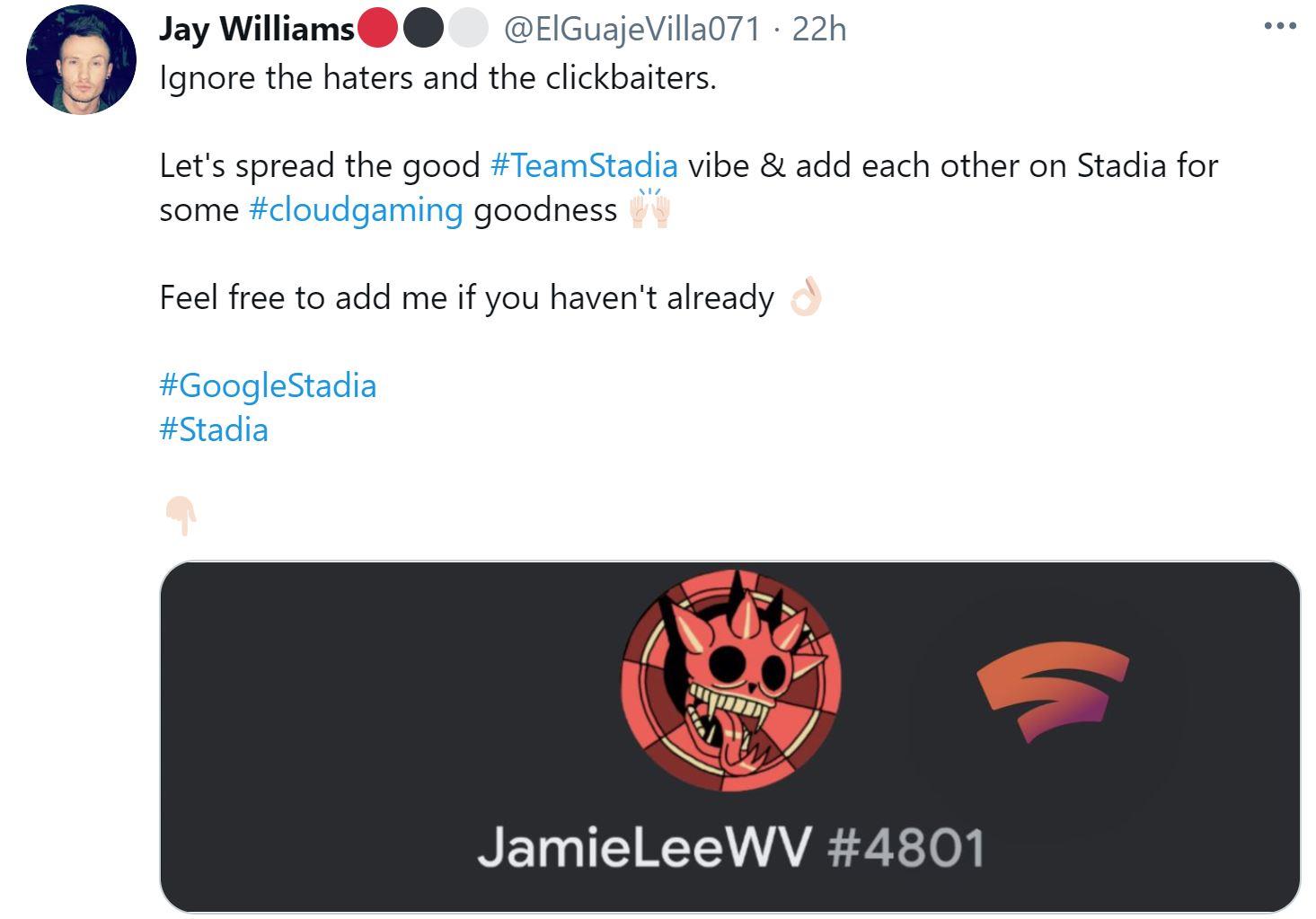 Here’s the thing – the Stadia fanbase, generally a united, inclusive, and amiable bunch, has been rocked by a series of events that have shaken it down to its core – forcing the community to circle the wagons and rebuild itself into something much more focused. Over the trials of the last couple of weeks, Stadia fanhood has shown that, when pressed, it can become laser-like in its precision, and wall-like in its defense of the platform that spawned it.

There have been a lot of ups and downs. Over the course of the last several weeks, the Stadia fanbase has been torn apart by unexpected news, drawn lines in the sand, splinted into factions, regrouped to fully fund a Kickstarter, and then stood together against a common enemy. It has been a wild couple of weeks, and the rollercoaster ride has been kind of exhausting to watch.

#TeamStadia, as they are known on Twitter, have always been scrappers. Since day one, they have had to face down haters and doubters, resolute in their collective positivity and devotion to their platform of choice. Since Stadia’s inception, they have bolstered Stadia against daily attacks, constantly requesting new games be added to the system, and calling out Stadia’s exclusion from most major websites and news sources. For the members of Team Stadia, it hasn’t been enough to enjoy Stadia, they needed to build a fort around it and defend it – a small cadre of influencers entrenched against the world. Of course, with recent events, that fort has needed a lot more reinforcement.

On February 1, Google announce that it was shuttering Stadia Games & Entertainment, Stadia's first party video game development branch. Headed by industry veteran Jade Raymond (Assassin’s Creed, Watch Dogs), SG&E was considered by fans to be the ultimate expression of Stadia’s promise. The two SG&E studios based in LA and Montreal were reportedly working on first-party cloud-based games that simply could not be achieved on other, standalone platforms. These games were to use Stadia’s cloud-based streaming tech in innovative ways that were impossible on PCs or consoles. The sudden closure of Stadia Games & Entertainment before any games were announced – let alone released – wasn’t necessarily a death blow to Stadia, but it certainly left some bruises on its fanbase. 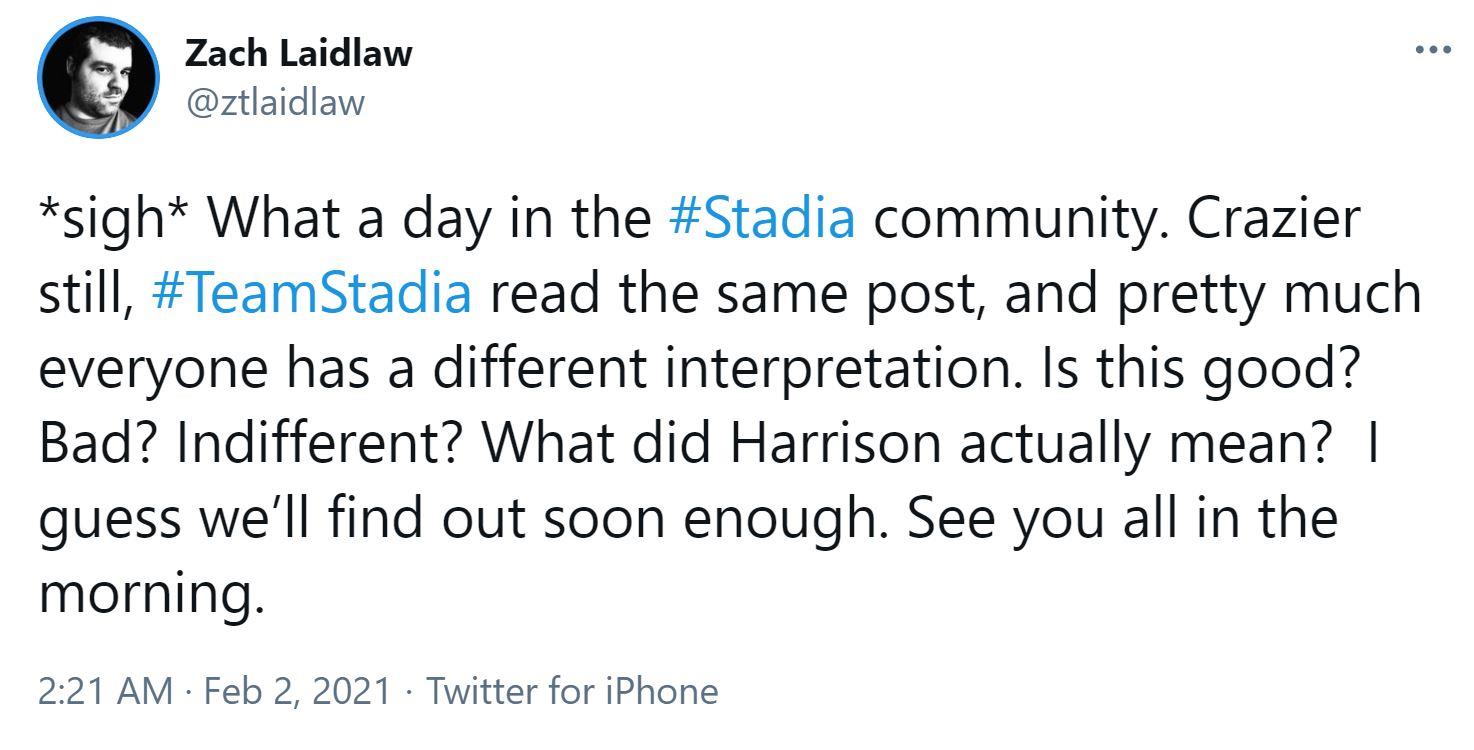 Is Stadia going to die any time soon? No, clearly it is not. Google has contracts to fulfill, and has assured users that at least 100 new games will arrive on Stadia over the rest of 2021, with over 400 games “in the works” for the next few years. But the closure of Stadia Games & Entertainment, announced with all the grace of a band-aid being ripped from an open wound, caused a seismic shift in the base of Stadia fandom. The foundation of Team Stadia shook, and factions immediately began arguing about the future of the platform.

The knowledge that Stadia would never release any first-party releases was a tough pill to swallow, even for the most ardent Stadia fans. Opinions ran hot, and while most conversations remained civil, many fans felt that the writing was on the wall. Stadia – and Team Stadia – would soon be buried in the Google Graveyard. Without first-party games, the platform and the community would eventually wind down and die.

But before long (two days, to be exact), Team Stadia regrouped on Twitter with a message of solidarity and renewed commitment to Stadia. “If Stadia lives for twenty more years or closes its door in two, our time spent together will have been worth every minute. Every livestream, every tournament, every roundtable, every podcast, every community playalong and Super Saturday and bash and beyond have been moments of fun and excitement making memories we share.” The message was signed by 44 content creators. 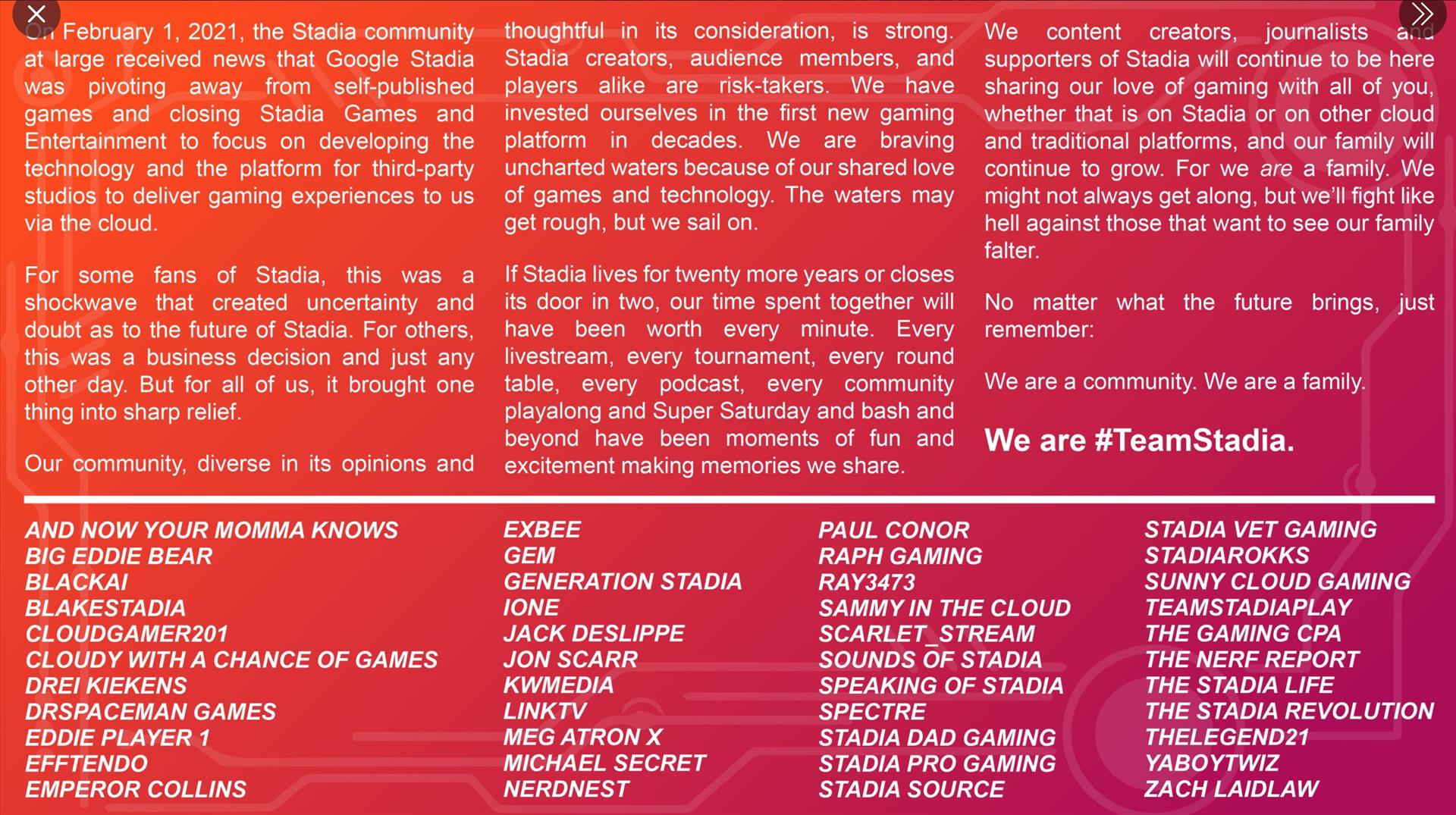 Of course, even with this show of community, Team Stadia’s whirlwind February was just beginning. Through the first few weeks of the month, it seemed that every day some new subject was becoming a focal point on Twitter.

On February 8, Terraria co-creator Andrew Spinks very publicly announced the cancelation of the very popular game’s release on Stadia. Spinks was apparently upset over being locked out of his Google account for some unknown reason, and decided that his company, Re-Logic, would no longer do business with Google in general. In a community where every tidbit of news is dissected and analyzed, this news was enough to cause a ripple of discontent to sweep through Stadia Twitter. 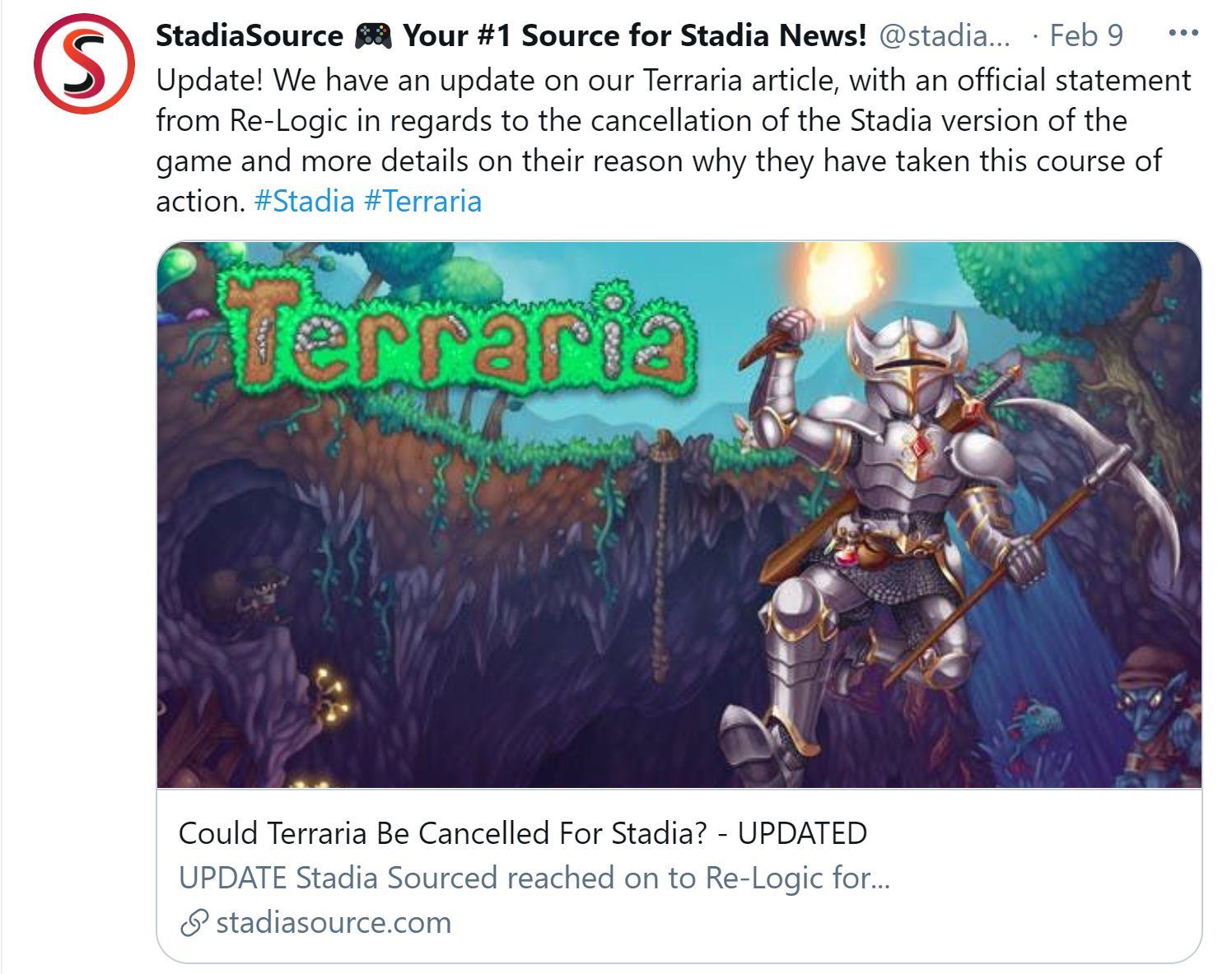 Then, on February 12, a tech content creator caused another hubbub online by posting a short video of themselves tossing a Stadia controller in the trash. Any other fanbase would probably have shrugged off this provocative display, but the Stadia fanbase – and Stadia’s beloved and beleaguered community manager Grace Yang – took it personally and were highly offended. 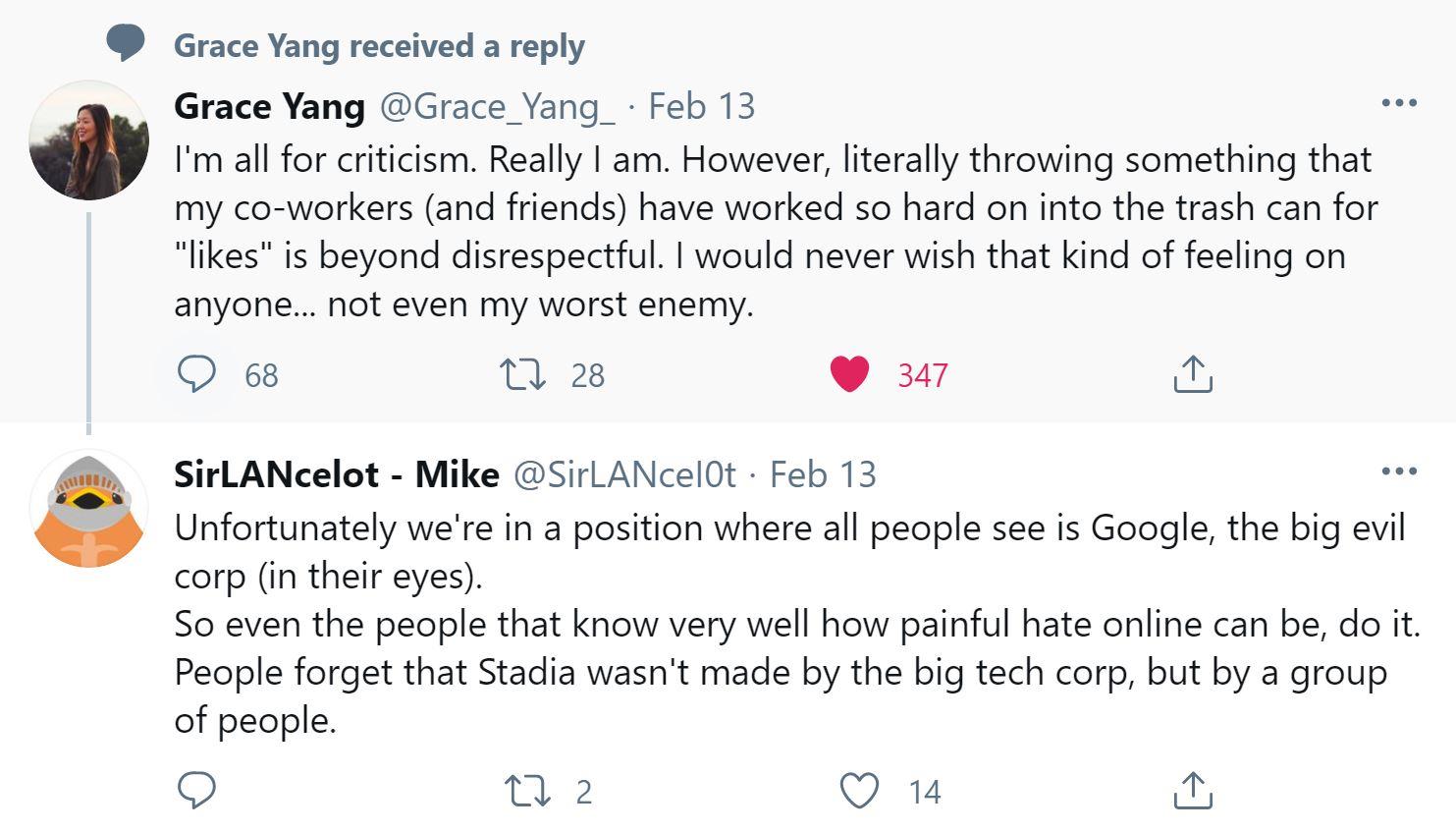 Of course, the news wasn’t all bad for the Stadia community. At the same time they were circling the wagons about the symbolic controller disposal, they were also rallying the troops to support the Kickstarter of Skyclimbers  – an action-RPG by Paratope – which they felt would be a good fit for Stadia. Currently, the Kickstarter is supported to the tune of $116,046 against a goal of $25,000 – the success largely fueled by the Stadia community.

Not happy just throwing money at the developer, Team Stadia then proceeded to make enough noise online that Paratope was granted a meeting with Google about bringing the game to Stadia. With almost any other platform’s fanbase, something like this would be next to impossible to pull off. But because Team Stadia is small and tight knit, it is able to mobilize as a cohesive unit – and it is clear that on some level, Google is paying attention. Team Stadia isn’t just spitting into the wind, they actually have the ear of the megacorporation they’ve aligned themselves with. 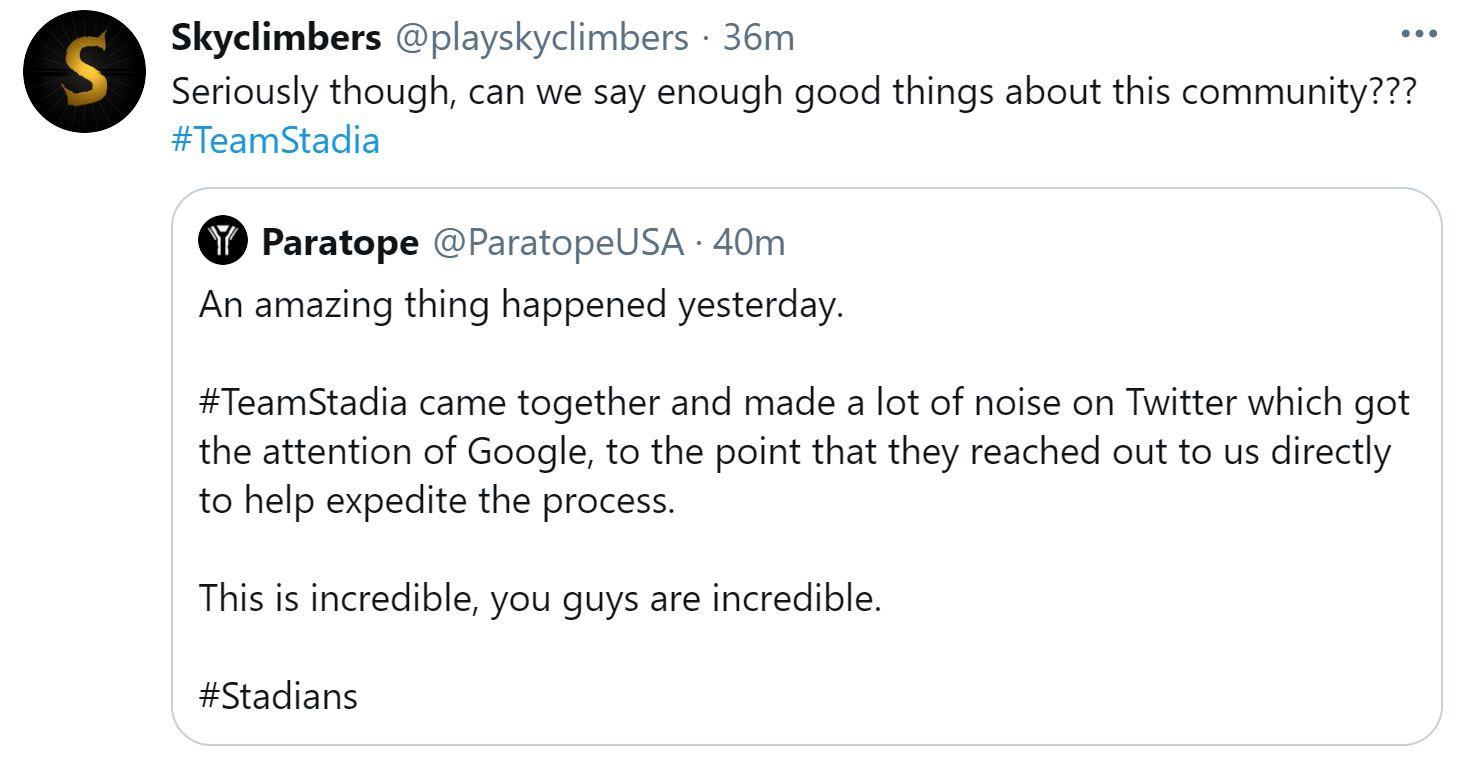 February has been an extraordinarily tumultuous period for Team Stadia. And due to the condensed size of the fanbase and its extraordinary willingness to communicate and coordinate, it is possible to watch the shifting winds on Twitter in real time. Team Stadia has staked a claim with their platform of choice, a claim that it takes very seriously. And whether it is battening down the hatches, coordinating an attack, or boosting the signal of a game it finds interesting, it is clear that Team Stadia isn’t afraid to flex a little to get things done.

Team Stadia is a unique phenomenon in video games right now, almost a union of content creators that have spontaneously organized enough to have some real power in the market. Many platforms are happy to talk about their “community,” but there are few platform communities out there where members can draw up a list of names to point at and say, “This is our community.”

Of course, not every Stadia fan is a member of Team Stadia. I, for example, consider myself a Stadia fan, but am content to watch from the periphery of the community. There are likely thousands of others like me: Stadia fans that don’t have the bandwidth or desire to get involved with the online community. But Team Stadia is out there every day advocating for the platform, linking arms and holding the line against naysayers and Google alike. It's probably not going to get any easier.