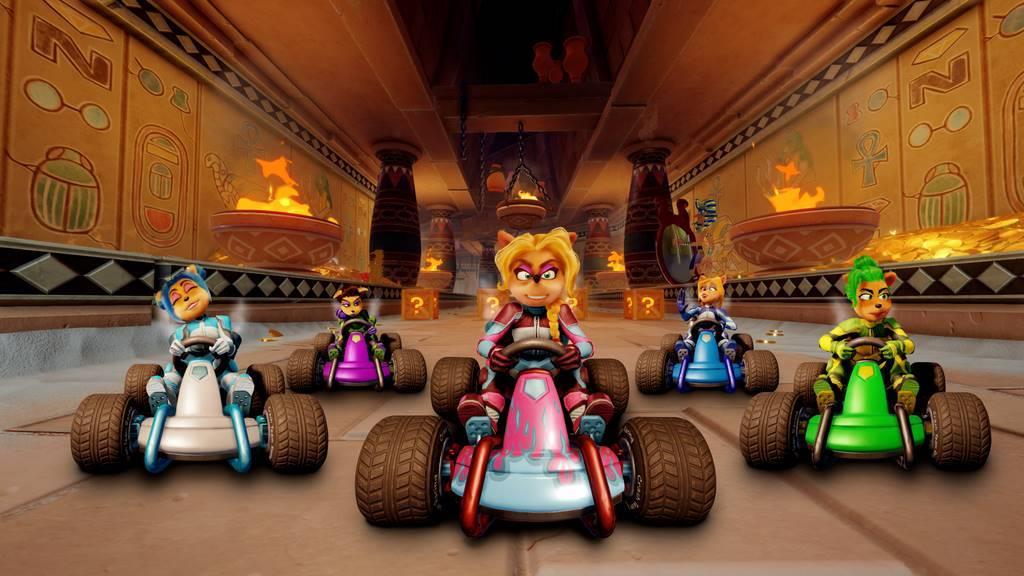 Written by Nicholas Leon on 7/11/2019 for PS4
More On: Crash Team Racing Nitro-Fueled

A heady mix of Mario Kart style racing with original characters and tracks, Crash Team Racing: Nitro-Fueled is another refresher in the full-blown remake genre. Sacrificing none of the gameplay characteristics of the original title (see my review of that other recent Crash remake) it is a blast from the past that puts a bit of the needling type of fun in the, shall we say, aggressive genre of racing titles.

The premise for the game is simple. A cartoony big bad named Nitrous Oxide comes to Earth and threatens to turn the whole place into a parking lot. That’s enough motivation to get Crash and the gang together to beat this guy (and each other, of course) in a series of races across different, themed arenas that cover Crash Team Racing, Crash Tag Team Racing, and Crash Nitro Kart. The stages are too unique and numerous to cover in detail here, but they cover a variety of environments from polar areas to Indigenous Latin American-inspired areas to traditional racing arenas.

The racing here is racing done dirty. If you’ve ever played a sport, you know that it is all about winning. Good sportsmanship and love of the game are second and third priorities. Nitro-Fueled realizes this to the fullest extent. Missiles, bowling bombs, toxic green and red vials, and Uka Uka masks abound on every corner, hidden in mystery boxes designed with a giant question mark on the front.

Yes, this is a copycat of Mario Kart. Does that hurt its originality? In a way, I suppose it does. Mario Kart came out in 1992, while the original Crash Team Racing came out in 1999. There’s probably not a patent or copyright on this method of aggressive gameplay. Heck, if there was, then the people behind the board game monopoly would be even more filthy stinking rich than they probably already are. I am harping on this aspect because it is a borrowed element that somehow does not feel stale. Rather, it feels more amped, in a way. It is a lot more aggressive, vibing with Crash’s gameplay aesthetic.

It is usually an anything goes sort of gameplay when it comes to the races. Sometimes it seemed that the usual leaders would be the characters matched to their own arena. But a lot of the time, I found that the usual race leaders to be Dingodile, Pura, and Polar. These are balanced characters, although Dingodile has statistically better acceleration. Why this is the case, I have no idea. Maybe it’s random, maybe it’s the right set of circumstances arranging that particular algorithm in my game. However, I feel this arrangement hurts the racing element of the single player, as it pressures the player to pick the characters who are perceived to be better, rather than by merit of their own stats, thus negating any unique qualities. Of course, this really only matters for the Nitro-Fueled gameplay mode, but we will get into that later. 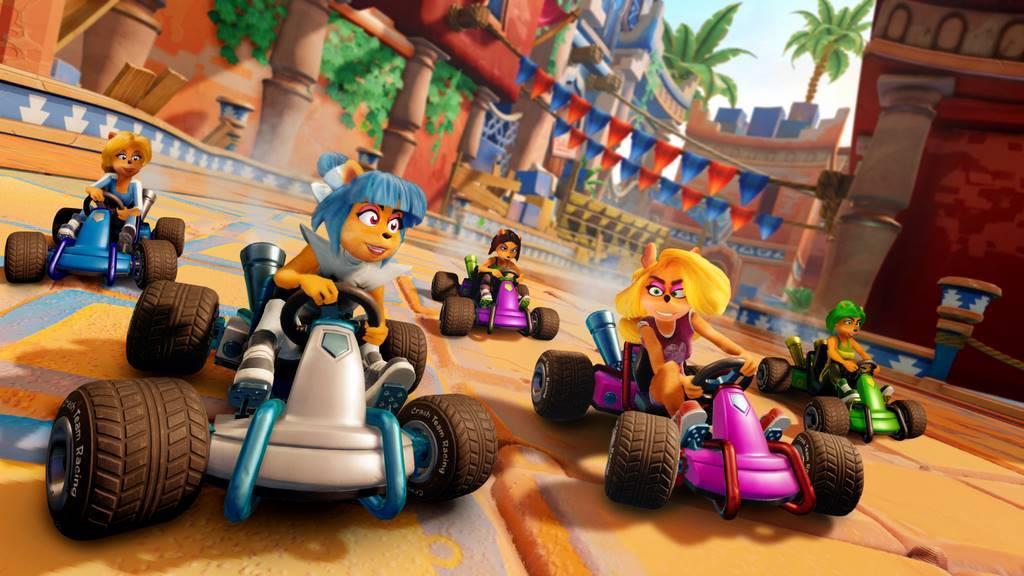 Another thing impacting the quality of the game is the way players unlock courses. Come first place in every race, one race at a time. If you take into account the aforementioned aggressive mode of gameplay, then this should, at once, both terrify you and plant an annoying, high-pitched laughing seed in your brain. Your experience will vary depending on the difficulty and if you are playing on Classic or Nitro-Fueled. Nitro-Fueled is the only mode with difficulty levels, and classic only lets you play with one character throughout the whole game, with no difficulty and no customization options. I played in nitro-fueled mode on medium because although I was certainly born in the 90s, I am now a full-blown entitled millennial who wants things handed to him. Just kidding, I really just wanted to complete the game in a timely manner. But now that I have played most of the game, I actually do want to explore the game’s classic mode, because it sounds like an entirely separate and unique way to play.

More unique ways to play include the game’s multiplayer modes, featuring local arcade and online. Arcade mode includes a heck ton of tracks, including a retro one. Online is pretty self-explanatory. I’m not that big on multiplayer racing games, as they’re not something I tend to succeed at. But I tried this one out anyways. Long story short, I mostly came in 8th place, which is last. But what I liked about this game mode was that it was unpredictable. The first time I raced, I started out in first place, and lasted there for about one minute, and then simply finished last. But another time I raced, I managed to stay in the middle for a period of time, and would have finished in 6th, had it not been for a lightning storm special move that got me stuck in place. And so I finished in 8th. I disliked the results, but I like the challenge that it imbibes with the Crash gameplay aesthetic. It also helps that it’s probably the biggest reason why I’ll keep playing this game. 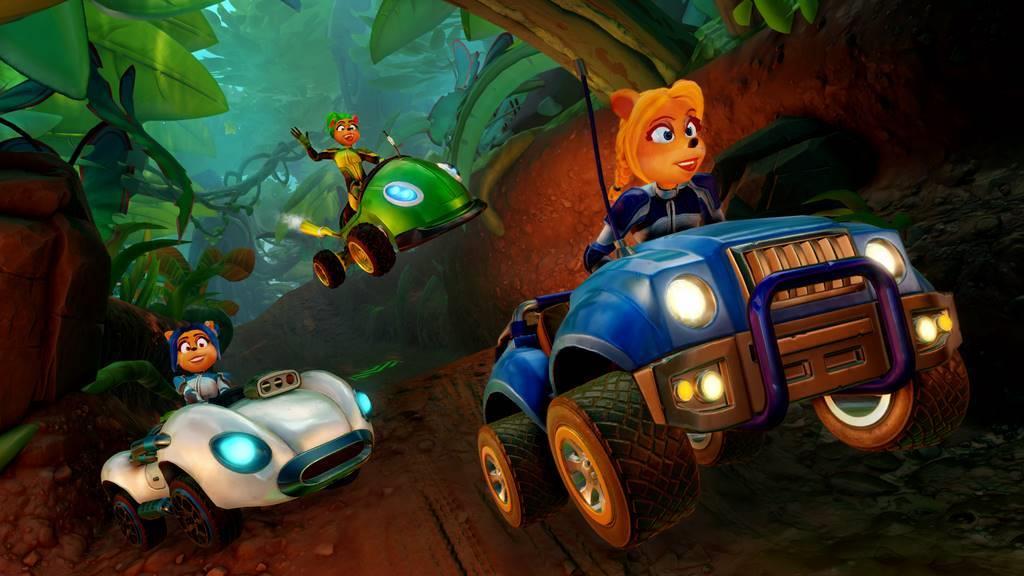 The game is fun and quaint. That’s what I like about it. The layers to the game add to this with the sheer amount of customization options available. Different skins, karts, wheels, decals, stickers, and characters is astounding.

Many of the unlockables have set paths. Win one race with this character and get that skin. Complete one stage in this or that arena and get that kart or set of wheels. Players can also play those stages again, either as a race, a time trial, or a collect-a-thon. So the game knows how to pack itself with content for days.

In a recent update, the Grand Prix mode was released. Another way to unlock new items, it drops a new track with every update, and players can complete challenges within Grand Prix to unlock skins, stickers, decals, wheels, and Quick, Daily, Weekly, Themed, and Pro Challenges. There’s also this thing called the Pit Stop, which is essentially the place where players can buy in-game items. I bought one character set with in-game currency that I earned.

Crash Team Racing: Nitro-Fueled, is a good game. Packed with races and characters, there are plenty of unique and varied ways to enjoy the experience. The only thing I’ve found is that, for all its awesomeness, it knows that it runs the risk of being a temporary experience. From the Grand Prix-style games as service challenges to the multiple game modes and content. But the thing is, it still holds up. It is still as great as it once was.

Crash Team Racing: Nitro-Fueled is a refreshing take on the aggressive kart racing genre. While it’s certainly not perfect, it’s packed with content that can keep the player engaged for a long time.