Anthem is the latest game to take advantage of NVIDIA’s RTX line of cards. No, there’s no ray tracing but DLSS went in place with a patch a few weeks ago. NVIDIA was kind enough to provide a copy of Anthem as well as a NVIDIA RTX 2080 Ti card to test out this new feature. So, how well does it work? It’s…. a little inconsistent, but has potential.

Bioware’s loot shooter has had some ups and downs in terms of performance on the PC, but one of the things that they were looking to to make the game run better is utilize DLSS on high resolutions. Let’s face it, the game needs work to get it to run well and DLSS is here to try and help with that.

The problem though is that you’ll only be able to take advantage of this if you meet the criteria. In fact, unless you have a certain configuration, you won’t even be able to turn it on. Here’s the list of what resolutions will let you enable DLSS.

My system consisted of the following:

The XG350R-C’s display has a resolution of 3440x1440 and it’s a Freesync monitor. I ran Anthem at the native resolution as well as turning on G-Sync compatibility.

I had a small bug that wouldn’t let me toggle DLSS in the game even though my setup was part of the supported resolutions, but NVIDIA was able to show me a way to modify a config file to turn it on and off. Fortunately, the ability to toggle it in the menu became available after another patch and I was off to do some testing.

I used a few areas from the beginning where you run through the tutorial in rescuing some Freelancers to walking around in Fort Tarsis and doing the same mission with DLSS on and off. Now, the first two tests we can do a pretty good job of replicating the same scene, but when doing a mission you’re at the mercy of what the other players do as well as the enemy AI when trying to duplicate a run.

Before we get into the results, let’s talk about the picture quality with DLSS on in Anthem. I found the results to be both an improvement and a regression depending on the scene. For example, there are times it makes the area seem softer with DLSS enabled. You can see it more in say foliage where the individual leaves seem to be more muddled together with the feature on versus the feature being off. Texture details can also sometimes seem less contributing to the softer picture.

Parts improved are some of the shimmering effects  you see in certain areas on say a Freelancer being eliminated. And I watched a few other people testing DLSS to verify that I wasn’t the only one seeing this. Depending on how some light shined onto certain parts, the edges of the Freelancer flicker that isn’t there with DLSS enabled. Performance, of course can be greatly increased in certain situations where you can see up to 20%. NVIDIA states up to 40%, but I’ve yet to find a scene that has that much of an improvement. That doesn’t mean it doesn’t happen or that maybe with more optimizations, that 40% is out of the question. Just right now, I didn’t see it in my testing.

The improvements I noticed were harder to see versus the softer image being presented. That’s something that’s hard to get by. But, performance improvement is there for most scenes I ran through. Yes, sometimes the gain was minimal, but there were areas where MSI Afterburner showed a good amount of improvement. The problem though was it was inconsistent. Running through Fort Tarsis, sometimes the improvement in FPS was smaller even though the run looked pretty much the same each time I did it. Sometimes, the graph jumped a lot higher. There wasn’t anything I could see that would do this other than think that Anthem’s just a game that’s inconsistent. 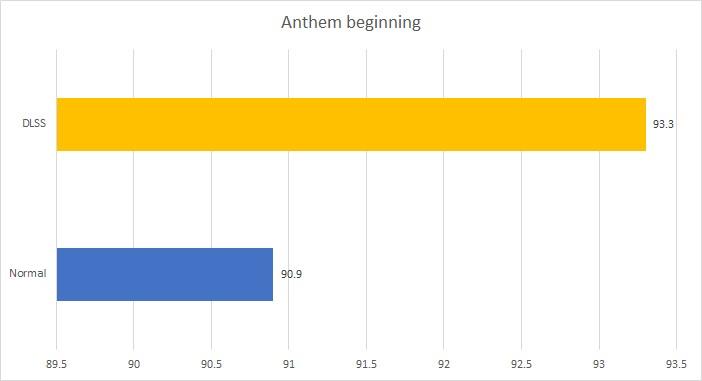 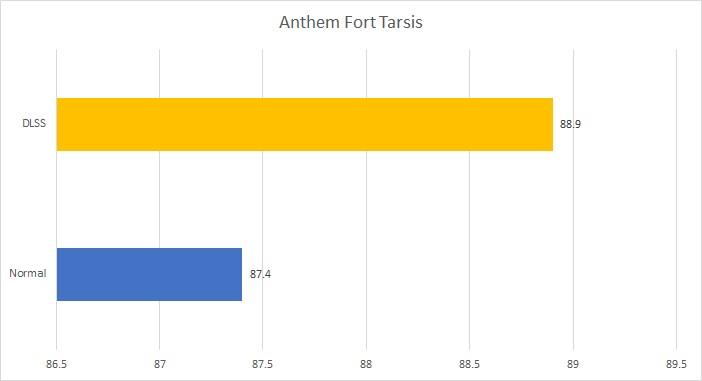 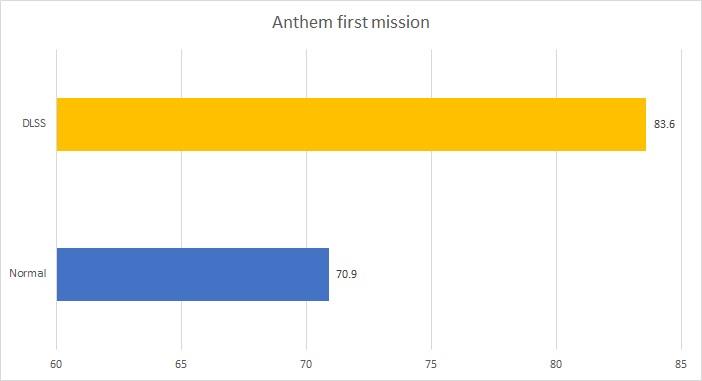 Now I wasn’t able to exactly duplicate the path I took in the missions so I can see how the performance between runs can be inconsistent, but for the most part the gains were there in a range of 2 to 20%.

DLSS is a technology that shows promise. Is it perfect? Of course not. It’s in its infancy and developers and NVIDIA are going to find ways to improve the performance and quality of it. As a developer, I know how these things can start out a certain way and through time, practice, and knowledge gained, improvements can be had. Anthem is a game (Metro Exodus being the other) that I’ve tested that shows DLSS does do things that can provide a nice performance boost albeit with some graphical changes..

Overall, I was happy with what it was doing. Was I bothered by the softer image at times? No, not at all. In fact, when I’m playing the game, I was too engrossed in the action to really nitpick it. I was more happy with the improved performance and Anthem still looks really good. After going back and forth, I decided for my regular playthrough to keep DLSS enabled as the benefits far outweigh any of the negatives it has, which I think isn’t that bad to begin with. It’s definitely a technology that I’m really anxious to see improved upon and just like ray tracing, I think it has a lot of potential.