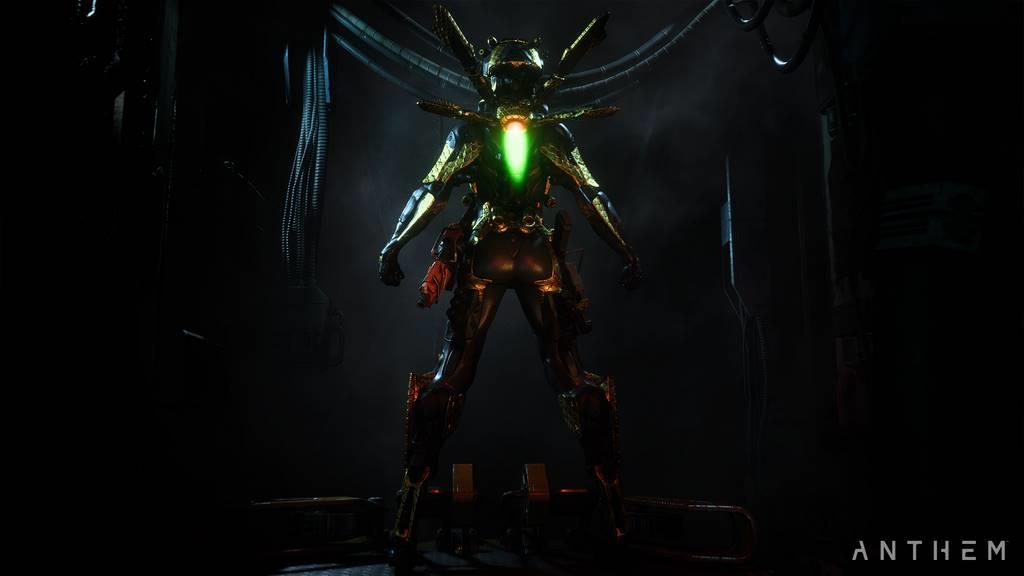 To get this out of the way, Anthem at once does and does not feel like a traditional BioWare game. There is the usual attention to character, with people feeling lifelike enough for the mainly multiplayer-focused fare. There is a layered history to this world and something of a story for the players to grasp onto, but it is constantly bumping along a road metaphorically paved with numbers and to-do lists. While fun, the story can only do so much to prop up a game that clearly has grander ambitions.

Players control the Freelancer. Yes, that’s the name. I was pretty sure I’d missed some critical line of dialogue that would have denoted my character’s name when I saw the subtitles pop up, but no, that’s it. It signifies a shift in this company’s M.O. in that, without the main character having a name, we are divorced from any personal connection. Sure, in Dragon Age Inquisition we took control of the Inquisitor, but if I remember correctly we were able to at least name our character. That, and there were memorable characters and a story I cared about.

Not so with this title. Compared with previous entries in Bioware’s storied resume, this is the shallowest. From the beginning, the missions go as follows: Talk to person, find out what they need, go out into Bastion (the game’s world) and get it. Oh, and kill everything that gets in your way. There is an overarching story about defeating a big bad guy whose motivations are continuously unclear, outside of the fact that he just wants to be the Biggest Baddy of them all, which is how he comes off in all the cutscenes he’s in. But where the villain fails, the supporting cast only just rises to the occasion. A fairly memorable circle of people quirky enough to come across as possessing personality, the game cuts them short by not allowing the player more interaction with them. 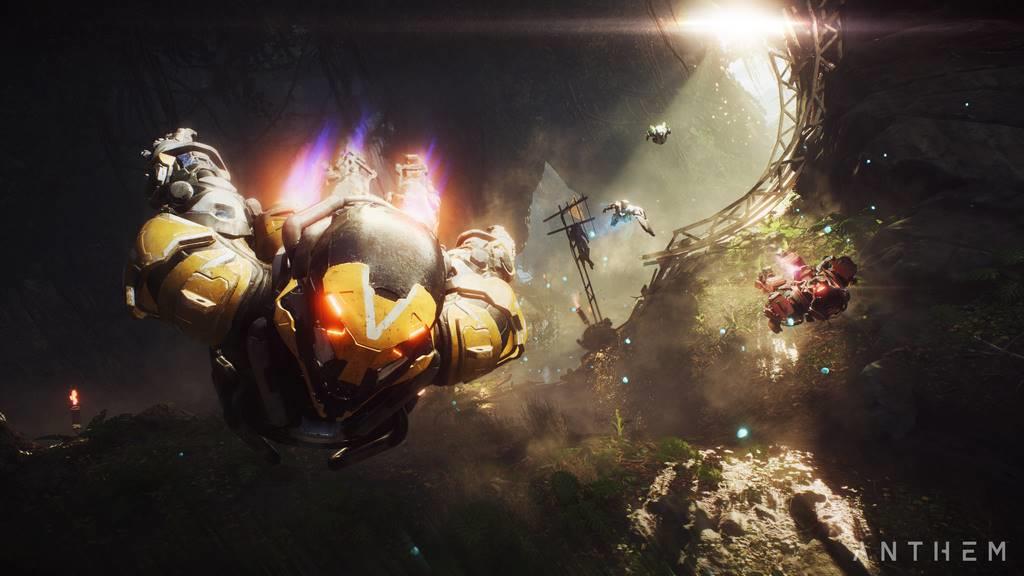 Every time I complete a mission, I purposefully stroll around Fort Tarsis, the game’s hub. I make idle chat with these people, conjuring up either missions, contracts, or interesting stories. However, I have little to no way of building any sort of rapport with these characters. I helped one character form a business partnership with another, and helped another get a radio broadcast of their favorite show. Outside of the main quest, that’s as good as it gets. No special scenes or moments to show that I’ve built a real relationship, only canned dialogue over and over again until I complete a story-central mission. I understand it may seem as if I’m being harsh on this type of game, but that it’s from a developer such as BioWare is not something I can excuse easily.

It’s poetic, then, that the gameplay provides a slight reprieve. The main pull for a lot of players, myself included, is the flying. I can say that out of the few ways this game innovates on the multiplayer shooter, that this element is the freshest one. The javelins, from the mighty Colossus to the feathery Storm, all have a unique weight and power to them that never allows for that mobility to get old. The rocket boots powering up, my javelin hanging in midair, and then blasting off into the jungles or waters of Bastion is always fresh. Sure, it doesn’t look exactly like what we were given at the cinematic E3 reveal, but that’s to be expected. Still though, it would have been nice to bask in that hazy, cloudy environ, but maybe we’ll get that in DLC (kidding, but not really).

Players can equip all sorts of ordnance to their Javelins. The Storm is equipped with mostly elemental powers. The Ranger is a traditional soldier-type. The Colossus is nice, heavy, and blows things up real good. The final Javelin, which I have yet to unlock as of writing, is the speedy Interceptor. It’s fast, and it cuts and kills things really fast. 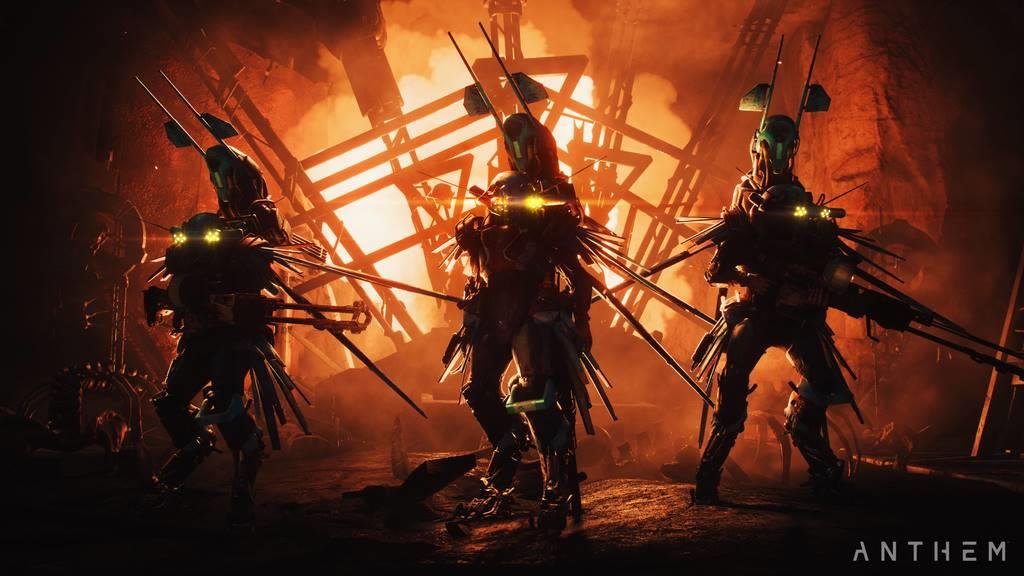 From mission start, it’s clear that this is very much a number’s game. Racking up experience, higher level weapons and gear, and earning what little gold I get out of missions so I can buy a funny emote that costs thousands, is the biggest return on investment. For some, this is fine, for others, it might get old. I’m not sure where I fall on this line. It’s nice to rack up big rewards, even if they’re only incremental steps towards becoming a massively overpowered Javelin. But it does get slightly old fighting the same enemies in the same locations over and over again. Sure, the fights are kinetic and highly explosive, and the maneuverability is, again, always fun, but there is not much otherwise that separates Anthem from the ranks of other looter-shooters it now joins.

I had almost set my mind on what I wanted Anthem to be as soon as I sat down to play it. A hollow, if ambitious, shooter that has aspirations to be something that it clearly is not—meaning a story-focused game with complex, character-driven narrative. Instead, it’s a fairly empty, if detailed, playground where I can collect things to upgrade my suit, shoot enemies to level up my character, and collect tidbits of information on the game’s world. Not one of which I have read, because, frankly, the game’s writing hasn’t motivated any interest in me to do so. 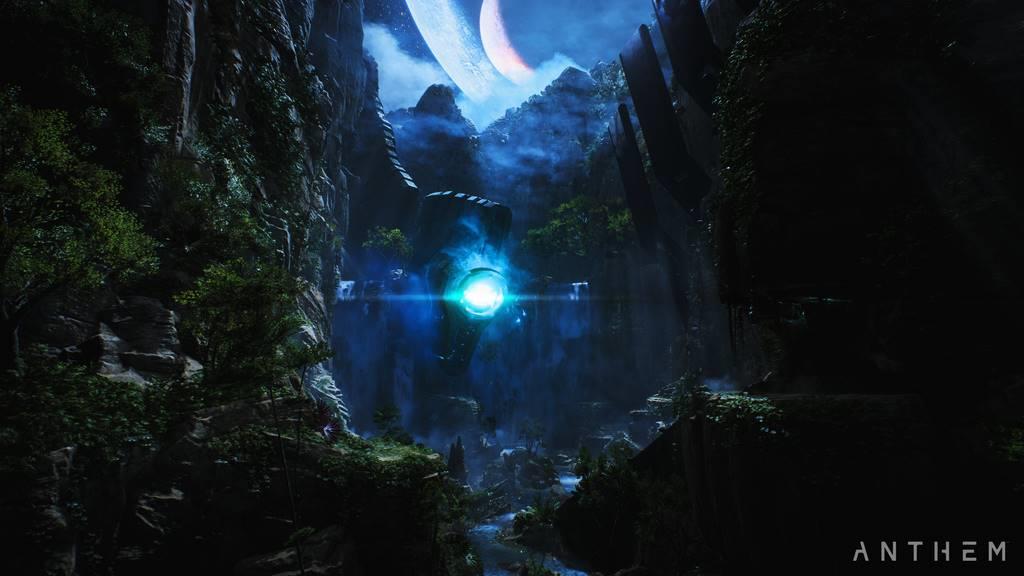 What was strange about my final hours with the game is that it did start to grow on me. I don’t want to spoil it, but it is because of story reasons. A few reminders of BioWare’s writing chops came through, with the characters finally fleshing out to become real people and not just plot devices. It’s too bad that that only lasted for the length of the final mission. Immediately afterwards, I was let go to dither about, repeating the same missions I had already completed earlier, only this time for bigger and better rewards. There was a tease, in-lore, of more content to come, but for the most part the message was clear: play it again, and again, and again.

Anthem is a competent looter-shooter. It is not an overwhelming, hallelujah-inducing entry into BioWare's storied history, but it's fine. I doubt I'll engage with the game past unlocking the final javelin, even though there is that tease at the end of further content.