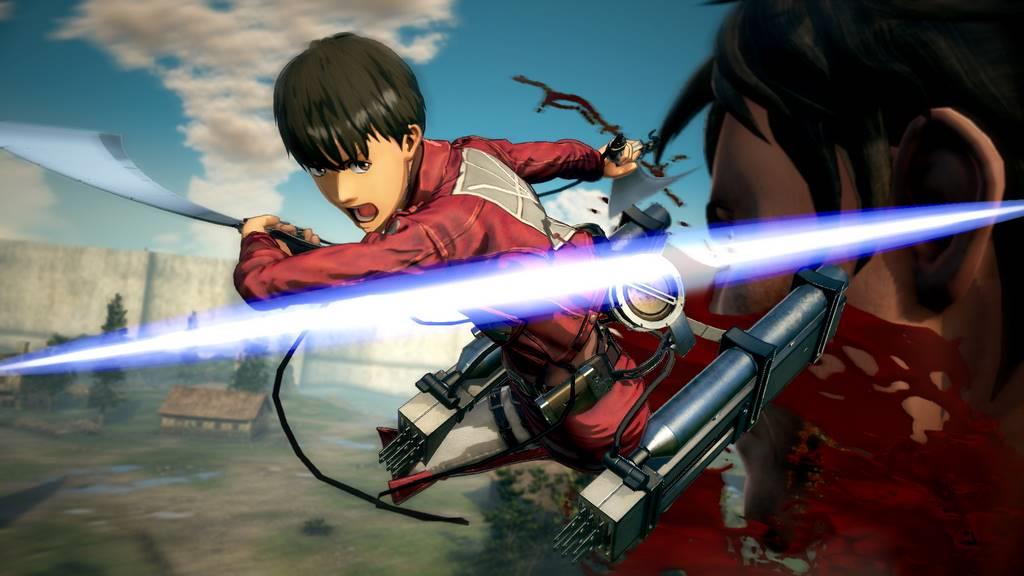 The first Attack on Titan was a great game and a faithful adaptation of the Anime. Being able to fly around the battlefield while taking down Titans as your favorite characters was so satisfying, so of course I was excited when the sequel was announced. The game still is fun, but this is also one of the weirdest games I have ever played in terms of how they decided to frame the story mode in the sequel. Flying around and taking down Titans is as fun as ever but there is this strange sense of Deja Vu that I couldn't escape while playing it.

Instead of playing as characters from the source material, Attack on Titan 2 begins with you creating your own character, male or female and you get to experience the story from that character. The story starts during Season One when the wall comes down and the troops are dejected after suffering major losses. While there is a tutorial mission, the game throws you right into the action. You are dropped onto the battlefield and Titans are on the loose. Take them down. Traversal is probably the most fun part about the game as all characters have what is called an OMD which lets them fly around the battlefield like Spider-Man. While there are some missions which let you ride a horse, I always opt to just fly around since it's and more fun.

Most of the missions in the game revolve around taking down Titans. To take a Titan down, you need to attack its nape on the back of their necks. When you get close to a Titan you are able to lock onto either of their arms or their legs. While you can just keep attacking their nape and take them down easily, you will want to pay attention to their limbs since they may contain materials you will later need to craft new weapons, equipment or upgrades. Sometimes you will also see smoke signals on the battlefield indicating that your squad mates need help so you can go rescue them but you also need to pay attention to the main objective at hand. Wasting time trying to save too many squad mates will usually mean you fail the mission since other Titans destroyed your main base or important characters were killed. 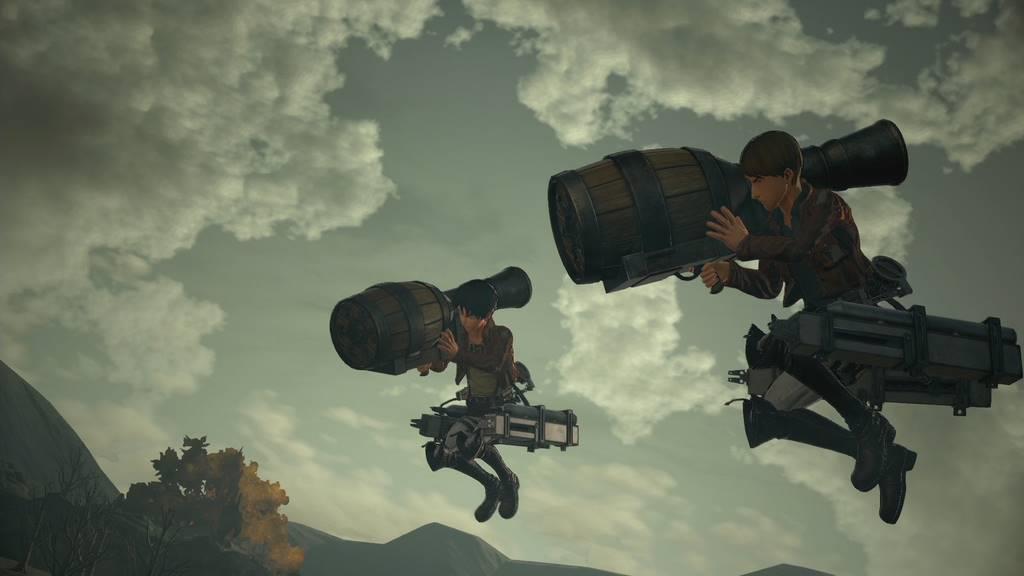 While you don't get to play as the characters from the anime (Except in the other game mode. More on that later) you can team up with them. If you see characters around the battlefield you can have them join up with you which becomes useful as you can direct them to attack certain areas of a Titan. For instance you can command them to attack a Titans arm while you focus on their nape. This becomes extremely helpful when it comes to the Large Boss Titans. Characters that have an "A" rating will usually have some kind of cinematic team attack that will deal huge damage but also have huge cooldowns so you need to use them wisely. There is also a new mechanic called the sneak attack. You can pull out your scope and focus on a Titan and if you are quick enough, you will be able to launch yourself towards the Titan and kill them in a single blow. This however is high risk / high reward. Hitting the killing blow using a sneak attack is pretty difficult and if you don't launch yourself towards the Titan immediately, they will always lock in on you and will chase you down, which almost means an instant grab.

You also need to be mindful of your equipment during battle as well. As you attack Titans, your blades will start to wear out and your gas canisters will deplete. Sprinkled throughout the battlefields are locations where you can build bases that will refill your blades and gas canisters when you visit them. You can also build weapons that will constantly fire at Titans when they get near them. One important base you can build is one that will mine for resources that can be used to buy or upgrade equipment. Of course the Titans will destroy these bases almost immediately if they get near them so you need to be mindful of this as well. 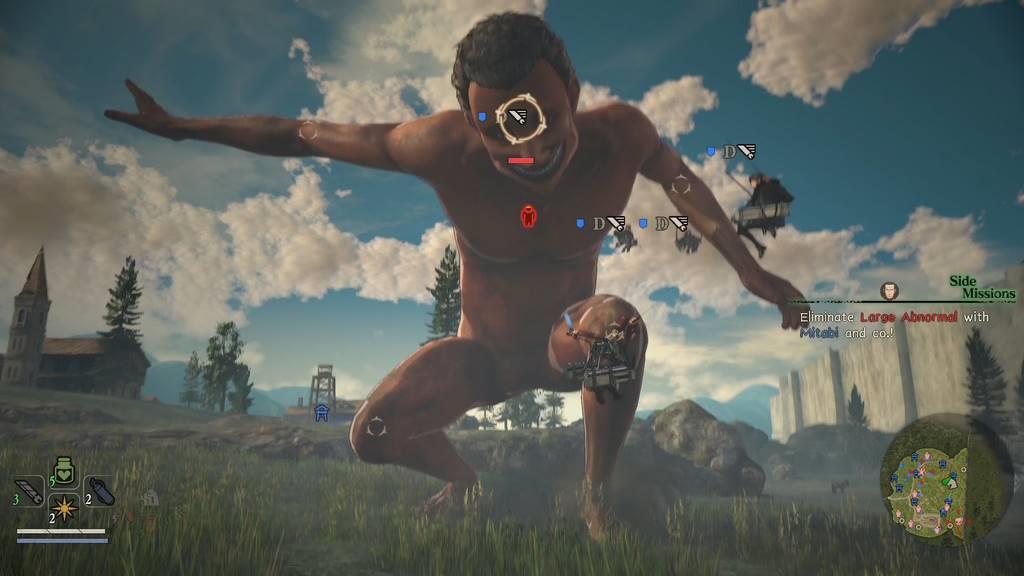 In between major story chapters you will be able to roam around the local town and buy/upgrade equipment along with being able to chat with characters from the Anime. While it seems like a cool idea on paper, the execution isn't that great. I can kind of see what they were trying to do. By talking with other characters, your friendship meter with said character will grow and will unlock unique abilities that you can bring with you into battle. The system somewhat works like the Social Links system from the Persona games but the problem is that it never really seems like your conversations matter. You get a selection of responses to choose from but really it's all about picking the correct choice that will raise your friendship meter so you never feel like you are having an actual conversation with the person. I mean, you can go from praising someone to being a complete jerk to them seconds later and it doesn't change anything. Most of the time you will get two responses that are a-hole responses and one that is a nice one. For instance when talking to a character your choices will be something like "I agree", "stop crying like a baby" or "I'm bored". Well of course you will choose to agree since you want those points. Still it is cool that when talking with characters you will get to learn more about them and will get short story sequences which were written specifically for the game.

All that said though, while playing through the story mode, I kept saying to myself, "haven't I already played this?" That's when I started to realize just what was happening. Attack on Titan 2 doesn't just focus on Season 2 of the anime, it also features the first season as well and you now get to play the game from a different perspective (that of your created character). While those who never played the first game won't notice anything, those who played the first are going to get a strange sense of Deja Vu because the game features the exact same missions and even cutscenes from the first game. I'm not joking when I say they are exactly the same. I had to even back out to the main menu of my Playstation 4 to make sure I was actually playing Attack on Titan 2 and not the first game because I was so confused. While it's nice to get a refresher course seeing the story through your created characters perspective isn't really a substitute for having to play through the same missions again and it's going to take quite some time before you even get to the Season 2 part of the story mode. Luckily the gameplay more than makes up for it. 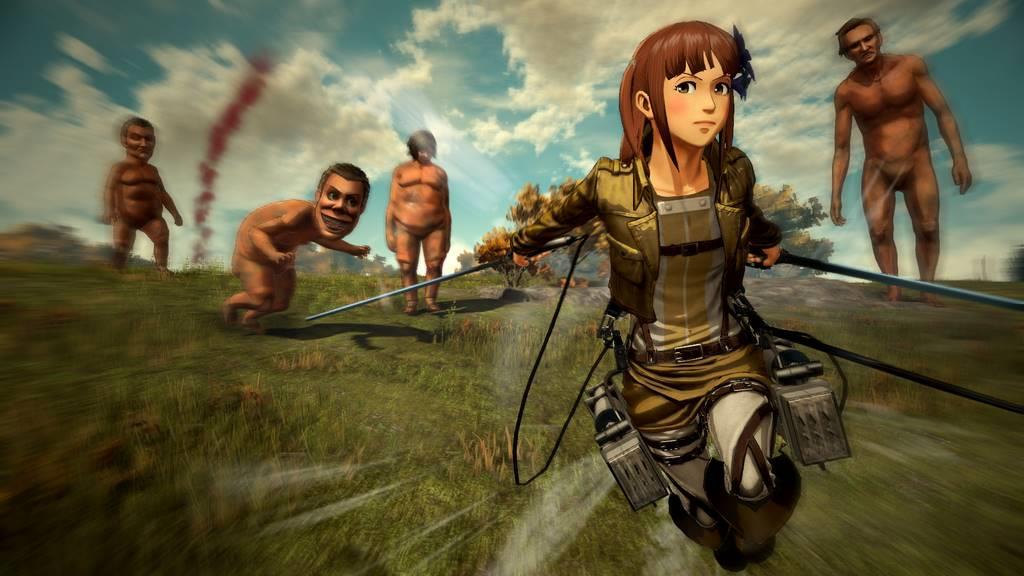 Other than the story mode there is another mode called... well, "Another Mode". This mode lets you play as your created character or one of the characters from the anime. Another Mode is pretty much a standard mission mode where you will accept various tasks which of course involve taking down Titans. The more missions you complete and the more Titans you wipe out, the more your base can expand and thus expand the map of the world. As the map begins to open up, more missions become available. Here is a tip. Want to take down Titans easily? Play as Mikasa because good lord she is OP. Even at level 1 she can take down just about any Titan in the game with a single hit and she can decimate boss Titans in seconds. Now of course this makes sense since shes an incredibly powerful character in the anime and graduated top of the class but still. Same goes for story mode. If you see Mikasa wandering around in a story mission, make sure to recruit her if you want to easily blow through the level. Another Mode is a fun alternative to Story Mode where you can just screw around and level up characters. Another Mode also features online Co-Op.

Attack On Titan 2 is another great game that faithfully adapts the source material into videogame form but it's a shame that so much of the game is just a rehash of the first game. It feels like this is more like an enhanced version of the first game instead of a full blown sequel. That said, the gameplay saves it because even though it's a drag to have to play through the same missions from the first game, the gameplay is as fun as ever.

While the game is a fantastic improvement over the first game, the ability to play through the story mode as a created character doesn't really make up for having to play through the exact same missions while watching the exact same cutscenes of the first game all over again. That said the gameplay more than makes up for it as flying around battlefields and taking down Titans has never been more fun.