Confession time, I didn’t find Attack on Titan to be the greatest anime ever of 2013. I thought it was ‘Bad Life Decisions’ the anime. That said, I did think that the omni-directional maneuvering gear was one of the coolest things ever, and that the Attack on Titan series was just begging for a game. The Omega Force and Koei Tecmo collaboration machine continues to churn out some pretty damn good games, and Attack on Titan is no exception. In fact, it might be the greatest adaptation of an anime property to video game to date, which is no small feat. Keeping it short, if you’re a fan of Attack on Titan, then this game is going to be perfect for you, even if it does have a few rough spots.

Humanity is on the brink of destruction, titans bear down on them, grotesque mutations of the human form that do nothing but destroy and consume humans. Pushed to the brink, mankind has retreated behind giant walls meant to keep the titans out, while the humans huddle in fear, knowing that just beyond the walls Maria, Rose, and Sina, the bringers of their destruction roam. One day, a massive titan, breaks through the wall of the Shiganshina District, a small town behind Wall Maria, allowing a flood of titans through, forcing them to retreat behind Wall Rose, and in turn forcing a massive influx of refugees into a shrinking space, causing much turmoil. During this event, the young Eren Yaeger loses his family and retreats with his friends, swearing to destroy every titan for what they have done. You are Eren Yaeger, fresh out of the military academy and ready to fight.

The game’s story mode takes you from Eren’s beginnings to the end of the first season the animated series. This means you’ll get a bit of a truncated experience, but you’ll also get to play some of the highlights. I don’t want to spoil anything, but if you’ve seen the show, then you’ll know what you’re getting yourself into, and you’ll get to experience the thrill of battle with all the characters you know about. You’ll explore the town of Trost, venture out toward the Shiganshina District, and make your way through the forests as you hunt down the Colossal Titan, and try to save humanity from a gruesome end. 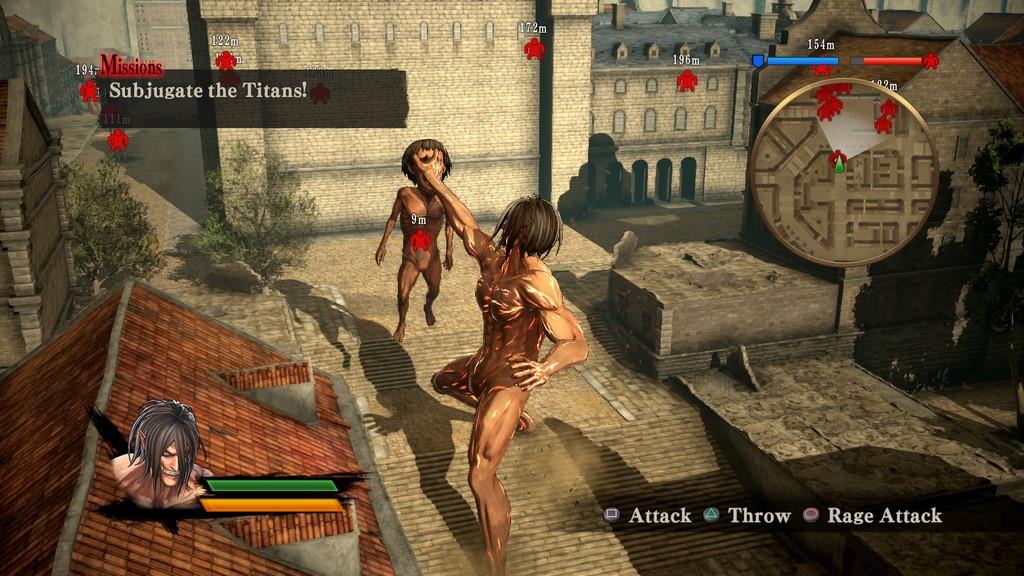 Throughout the game you’ll change vantage points, so you’ll spend time as Levi, Mikasa, and Armin, and you can unlock additional characters to use in the game’s online mode. Each character will level up as you complete missions, which will give them additional skills in addition to item drops that can be used to upgrade the weapons to help take down the titans and improve your mobility with the omni-directional maneuvering gear. One thing this game kind of exposes as a glaring flaw that you’d have never seen in the anime, are vertical structures within the towns. If you happen to be flying along and run headlong into a building, it’s actually kind of a hassle to try to continue forward to run up the building. You’re better of moving at a lower altitude between buildings as you hurtle through the air. The game actually does a great job of giving you that sense of mobility, and the weaknesses that the characters felt from being out on the open translate almost perfectly to the game. Being out in the open is almost a death sentence against the titans, so make sure you keep an ample supply of gas. The controls are also a little tricky to get the hang of at first, but once you do, you’ll be a whirlwind on the battlefield, felling titans with the same ease that Mikasa and Levi would exhibit. That’s not to say this game is easy though, by the end of the first chapter, the gloves definitely come off and you’ll need to take care that you don’t attack titans haphazardly, if they tangle your lines, or manage to grab you or an important character, it can definitely lead to a swift defeat.

Every stage is a collection of missions that need to be completed in order to proceed. A lot of the time, you’ll be balancing between your main objective, and helping out the other major characters in the story as they struggle with titans. Helping them out is definitely to your advantage as they’ll help swarm titans to take them down, and in the case of Armin, they’re an absolute necessity since his attack power is purely based on the cast that is supporting him. While his individual damage is rather weak, he can command other characters to attack specific parts of titans, easily whittling them down to nothing. You will also find materials from removing arms and legs from titans, which can be used to improve your gear, so it doesn’t just help from a tactical standpoint to remove a titan’s legs, it also will improve your gear. 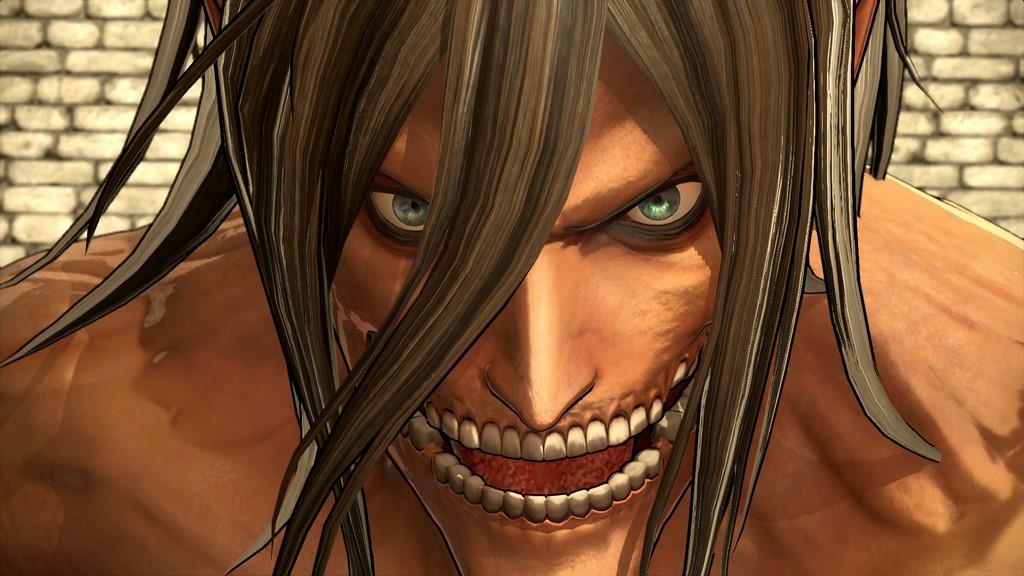 Attack on Titan is absolutely fantastic looking on the PS4. This is right up there with the Naruto titles as one of the best anime to game visual conversions out there. Characters and titan match their animated and manga counterparts almost one to one, and while there are occasional dips in frame-rate, the game still runs excellent most of the time. The audio is also pitch perfect as well, and feels just as tense as the show. Curiously though, the English dub was not included in the game, which is a bit of a bummer because I thought it was one of the best dubs out there. But we are getting this game only six months after the Japanese release, so I could imagine that that timeline has something to do with it, still, a bit of a let down.

The addition of an online mode is definitely something I didn’t expect, but it’s actually a ton of fun, and can be used to get some high-end items for improving your gear in the late game along with other unlocks like character bios and titan trophies that you can display in the lobbies. You can depart on expeditions or supply runs, giving you an open playground to complete missions with other players, and it’s just a ton of fun to be competitive or cooperative with each other in these wide open spaces that are just loaded with titan fodder to take down. 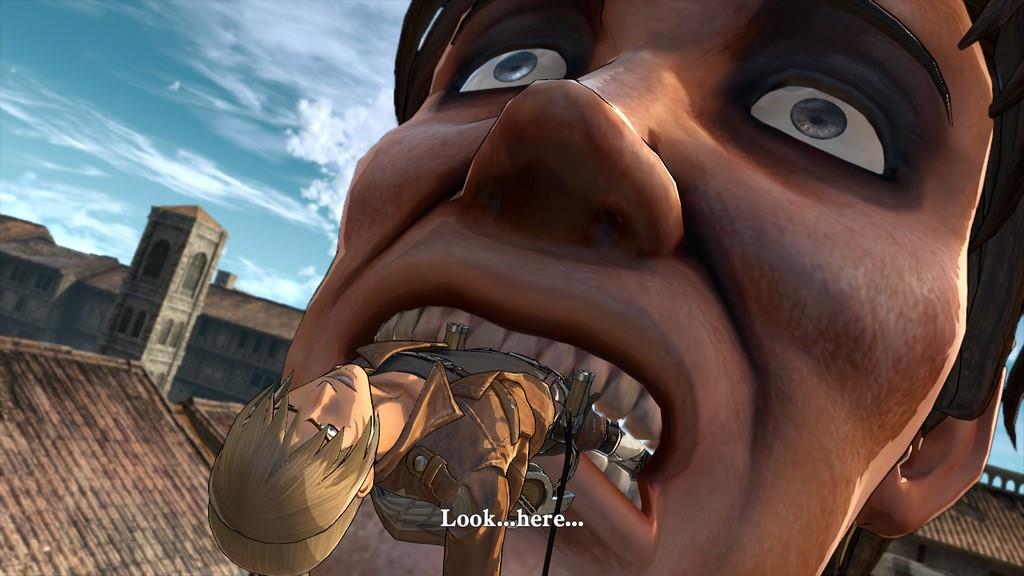 Attack on Titan is definitely the one of the best anime to game conversions out there, and it’s impressive how well it all comes together. There’s a slight learning curve in getting used to the omni-directional maneuvering gear, but once you do, titans won’t know what hit ‘em. The story mode hits all the high points, making it worth seeing through to completion, and the online mode is great if you’ve got other friends who are interested in picking this game up. The lack of a dub is a curious omission, but doesn’t detract too much from the final product. Like I said before, if you’re a fan of Attack on Titan, or even if you’re not, make sure you check this game out. It’s a load of fun.

Attack on Titan is an impressive feat, nailing the movement of the anime and that satisfying feeling that you get when taking down a titan is captured almost perfectly. There's a few minor flaws here, but for fans of the series, you're hardly going to notice.