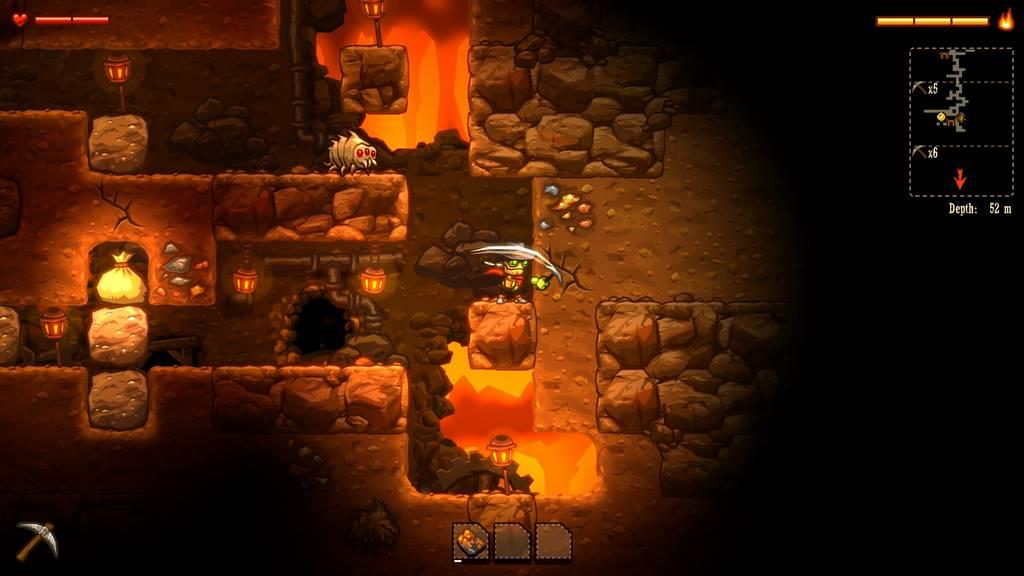 Written by Russell Archey on 2/28/2018 for SWI
More On: Steamworld Dig

Something that a lot of people complained about when the Nintendo Switch was first launched was that a lot of games were announced to be coming that were ports or existing games, namely Mario Kart 8 or another version of Street Fighter 2.  This doesn’t go for just triple-A titles though as a lot of already released games are hitting or have already hit Nintendo’s newest console such as Shovel Knight and the recently announced Legend of Kay Anniversary, and honestly I don’t think that’s necessarily a bad thing.  Yes, it would be nice to see more original games for the Switch, but porting an existing game to a new system does potentially bring in a new audience for that game.  Case and point, Steamworld Dig.

I never had the chance to check out Steamworld Dig when it was first released in 2013.  Its two sequels, Steamworld Heist and Steamworld Dig 2, were released on the Switch last year with several other systems, so it made sense to release the original Steamworld Dig on the Switch as well.  You play as Rusty, a steam-powered robot who visits the town of Tumbleton after receiving the deed to a mine once belonging to his long-forgotten uncle Joe.  The goal of the game is to dig down through the mine to uncover the secrets that lurk below.  As you discover and collect various treasure and ore, you can take them back to the surface and trade them in for money and experience.  After so much experience you’ll level up which gives you access to more upgrades you can buy from one of a few shops (only one shop is available at the start with a couple of more opening up throughout the game).

At first it’s just you and your trusty pickaxe, but as you explore the mines and the caves therein you’ll uncover new abilities that will help you dig even deeper.  These include a drill that is a bit weaker than your pickaxe but faster and can dig through really tough blocks, as well as the ability to launch your fist at blocks and enemies.  You’ll also gain a couple of defensive abilities, for lack of a better term, such as a super jump done by crouching and then jumping, and the ability to do a double jump with the second jump sending out sparks that can damage enemies.  The catch to some of these though is that it takes up water.  You are a steam robot after all.  Below your health gauge is a water gauge that drains when you use the drill, punch, or super jump.  If your reserves are empty, you either need to find a water hole to refill or collect a water pickup that an enemy can drop.  You also have a limited amount of light, about sixty seconds per bar in the upper-right corner or so.  When that runs out it’s not game over or anything, but the mine goes pretty dark making it hard to see.  You need to somehow get back to town or collect a light pickup that enemies can drop to light things back up a bit. 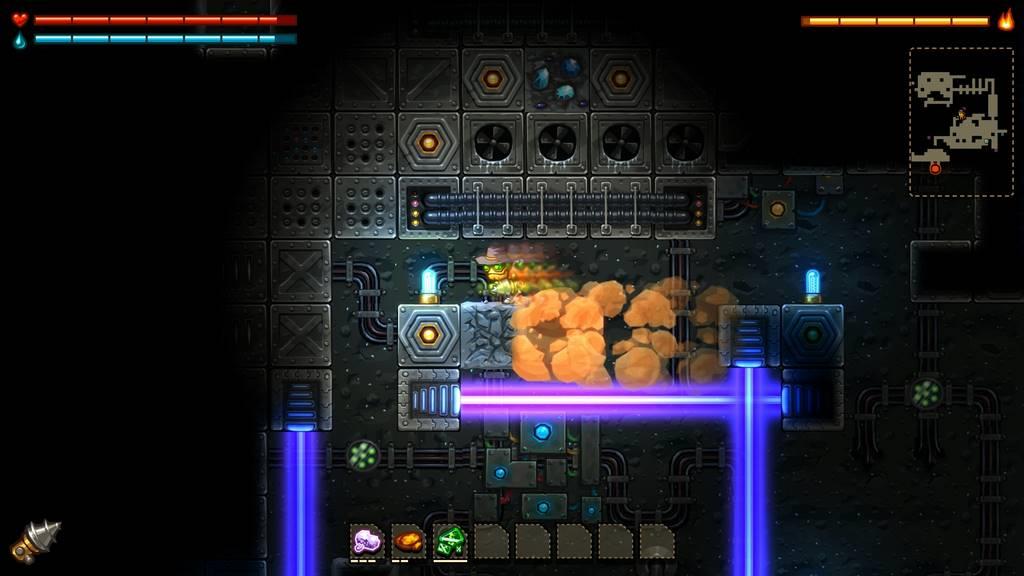 When you begin you start with little health, water, and light.  I mentioned earlier about spending money in shops to purchase upgrades.  As you level up and progress further in the game you’ll gain access to various upgrades such as improved health, water, and light.  Other upgrades include tougher armor to withstand more damage, upgraded pickaxes and drills to help dig deeper and do more damage to enemies, and bigger pouches to store more loot.  Each type of gem you find in the mines takes up one pouch slot and you start with very few.  Each gem also has a certain amount needed to fill up a slot completely.  Once all of the slots are taken up, you can’t collect any other gems other than what’s already in your pouch and not in a filled slot, if that makes any sense.  You have to take them back to town and exchange them for money and experience to empty your pouch.  However, there are several upgrades you can purchase that will increase how many slots your pouch has, meaning you can collect and carry even more loot between trips to town.

You can also purchase other items such as ladders to help give you a way out if you find yourself stuck, teleporters to take you back to town, and dynamite to blow things up.  Some of these, as well as some upgrades, require blue orbs as well as the required amount of money.  Orbs can be dug up like loot but they don’t take up any pouch slots.  I tended to keep a few sticks of dynamite on hand for areas that I couldn’t mine myself (more on that in a moment) as well as a teleporter to transport me back to town when my pouch was full.  During your travels you’ll find a couple of pipes that will transport you between that particular spot and town, giving you shortcuts back and forth, as well as a couple of teleporters left lying around.  However, only one teleporter can be found in town if you used one and it’ll always take you back to the last teleporter you used. 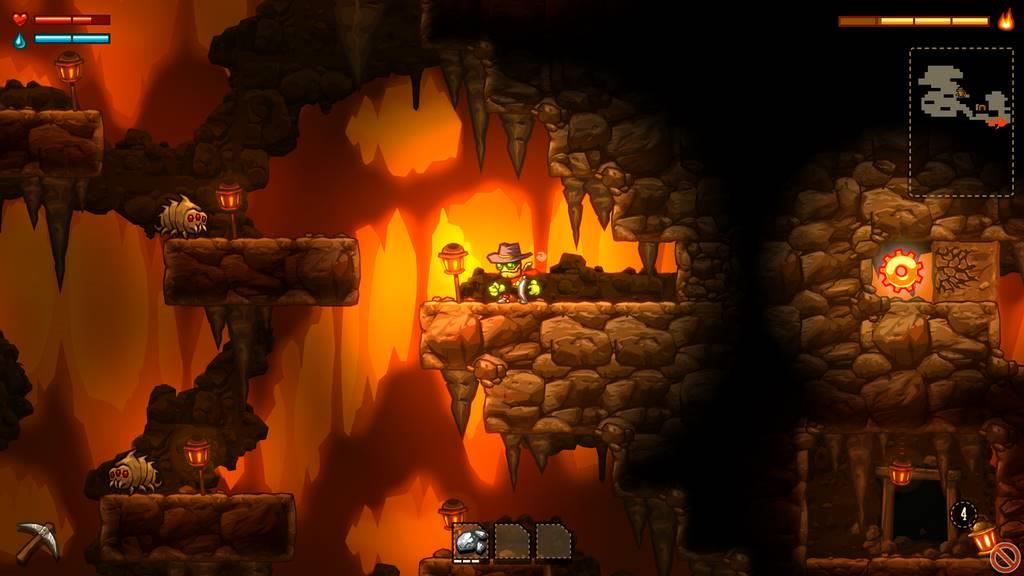 On the surface (pun slightly intended) Steamworld Dig sounds like a pretty good game, and it is, but it does have some issues.  Most of these are going to sound like nitpicks, but there’s one issues in general I’ll get back to that’s kind of a major detriment.  For starters, I mentioned using dynamite to blow up areas I couldn’t mine myself.  Strangely you have to be standing on solid ground to mine, whether it’s with the pickaxe, drill, or fist.  You can’t jump and mine something which is kind of strange, meaning you have to sometimes be a bit strategic in where you mine to get to the areas with loot.  The dynamite and the fist can help a bit in that regards, especially the fist since you can aim it in any of four directions.  Another nitpick is that the game gives you ladders as well as the ability to self-destruct in case you find yourself completely stuck and you can’t get out.  Honestly, that never came into play for me because since Rusty has the ability to wall jump, there aren’t too many times where you might accidentally make it so you can’t get out.  In fact, unless you mine every single block in your travels (and the ones with loot clearly stand out), I’m not sure when this would come into play.  The game can also seem a bit repetitive at times as you dig for a bit, go back to town to cash in loot (or progress the story), go back in to mine more loot and go to the next waypoint, and so on.

However, now I need to briefly address the one detriment I mentioned earlier: the difficulty.  I’m not going to sugarcoat this, Steamworld Dig is a somewhat easy game.  Remember that I never played the game prior to this review and it took me only four hours to finish it my first time through.  Yes, four hours, and that includes almost twenty deaths.  For the most part digging through the mines and caves isn’t all that difficult.  If you die in the mine shafts you’ll go drop your loot and go back to town after losing half of your money due to repairs.  However, you can go back down to where you died and recollect what you lost.  In other words, if you’re spending most of your money on upgrades as soon as they become available, there’s not much risk of dying.  The mine is randomly generated on each playthrough, so there is a bit of replayability, but without any sort of New Game + or similar, it just feels a bit on the short side.  On that note though, it is nice to be able to play in spurts if you don’t have a lot of time.

Overall, Steamworld Dig is enjoyable, but kind of repetitive and short.  After a while it just felt like I was going through the motions until I hit the final boss which, I must say, is pretty enjoyable and compared to the rest of the game, will keep you on your toes.  That’s not to say that Steamworld Dig is bad, it’s not.  However, I just wish there was more to it.  For ten dollars though, it’s still worth a pickup and I’ll probably go back at some point just to one hundred percent the game, or as close as I can get as I still have some upgrades I never got.  I did enjoy Steamworld Dig and I still think it's a good game as short as it is, and I'm looking forward to picking up the sequel on the Switch at some point in the near future (and yes, I know it's already out).

Steamworld Dig is a fun game, but it’s pretty short and can get repetitive after a while.  My first playthrough clocked in at just under four hours and most of the game is mining, going back to town to cash out and upgrade, and repeat.  That said though, Steamworld Dig is still a good game, and ten dollars is a decent price for it, but just take note that more expert level gamers might be disappointed in how short the game can be.