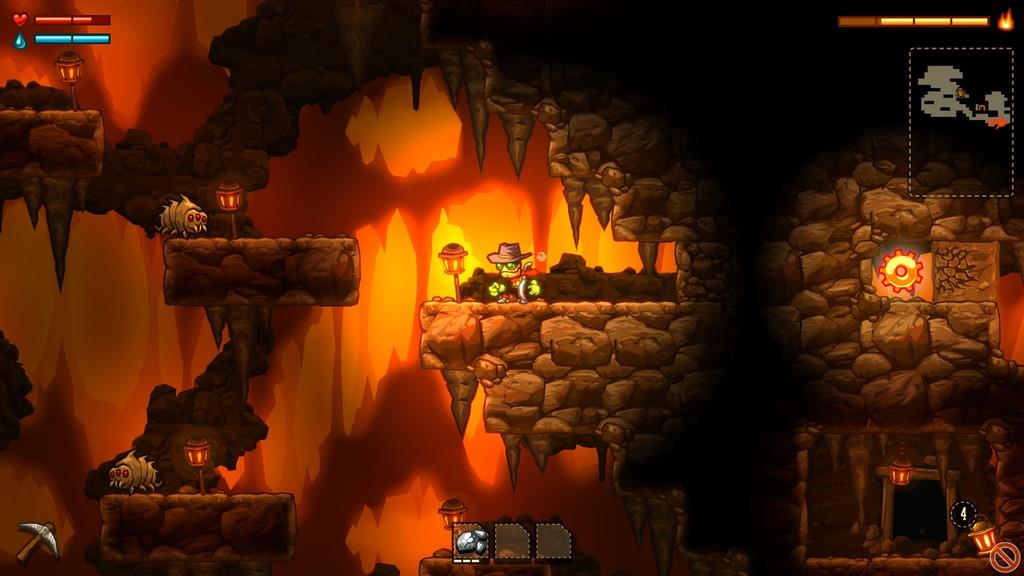 Written by Chapel Collins on 6/26/2015 for XBO
More On: Steamworld Dig

SteamWorld Dig probably isn't what you assumed it is. When I first went into it, I expected what was essentially another Minecraftian spin-off, like any number of other games. What I got was something completely different, in the best possible way. Like these Minecraftian games, SteamWorld Dig does take inspiration from other genres of gaming, but the end result is something very fresh and unique. I would like to describe it as a hybrid of MetroidVania-style games, platformers, and something else, but I can't quite think of what that something else would be, and I think that is a compliment of the highest order. SteamWorld feels very familiar, but only in the sense that it feels right, and not in the sense that you've played it a million times before.

Your journey will take place almost entirely in a huge, randomly generated underground cavern underneath a tiny Old West type town called Tumbleton, population: 3. You'll make visits to the surface to exchange ore for money and purchase upgrades and supplies, but the rest of your time is digging your way down. You play as Rusty, a robot who comes to Tumbleton and inherits the mines below from his Uncle Joe. Beyond that, there is little in the way of story, but that's fine for SteamWorld. Story isn't what keeps you digging down; the excitement of discovery is what drives the pickaxe. A few more characters will arrive as you level up, and one in particular will have short conversations with you that further the plot and give a reason to your digging, but it's not really important or even necessary. To be honest, I don't remember much about the story at all, but it didn't take away from my enjoyment in the least.

Inside the mine below Tumbleton, there are a few different sections that function as levels, or chapters, each one more treacherous than the last. They all have distinct looks and feels, and the change of scenery and challenge goes a long way to keep the game from stagnating. There are also pipes leading to the surface from the beginning of each section, which are basically elevators. This means that you can bypass the previous sections of the mine when going to the surface to resupply, or coming back down from the surface when you die, saving you untold amounts of time. Each section of the mine also has three caves, which serve as dungeons and puzzle rooms. The caves contain puzzles and obstacles that must be solved in a certain way, and are far more dangerous than what you'll find outside of them. Thankfully, a checkpoint is provided at the beginning of each one, so when you die you do not have to come back from the surface to retrieve your loot, and you're more free to test different ideas. Within these puzzle rooms, you are unable to use traversal tools, such as ladders, because the game insists you solve these puzzles their way. At the end of each cave, you will receive an upgrade to your chassis, which becomes necessary to proceed down the mine almost immediately after you step back outside. This gives Steamworld a very rewarding sense of progression, as all of the upgrades are useful, and you get them in quick enough succession that you feel like you are constantly becoming more powerful.

In addition to these power ups, upgrades for each individual tool become available for purchase from the vendors on the surface as you level up, such as more effective pickaxes, more health, and higher fuel capacity for drills and other tools. Money for these upgrades is acquired by harvesting ore and jewels from the mine and exchanging them for cash through one of the NPCs. Some of the upgrades will also require orbs, a more rare form of currency usually only found in hidden caves in the mine. The need for ore and orbs encourages you to explore from side to side as well as down, and to take your time with your exploration. I was never strapped for cash, but I did find myself in dire need of orbs throughout most of the game. Because of this, I was less inclined to buy upgrades that required orbs, as I was afraid I would need them more for something else later. This normally wouldn't be much of a problem, but because of SteamWorld's brisk pace, I felt like I was getting a little outgunned by the end. It's probably best for players to buy upgrades sooner than later, so keep that in mind when playing. 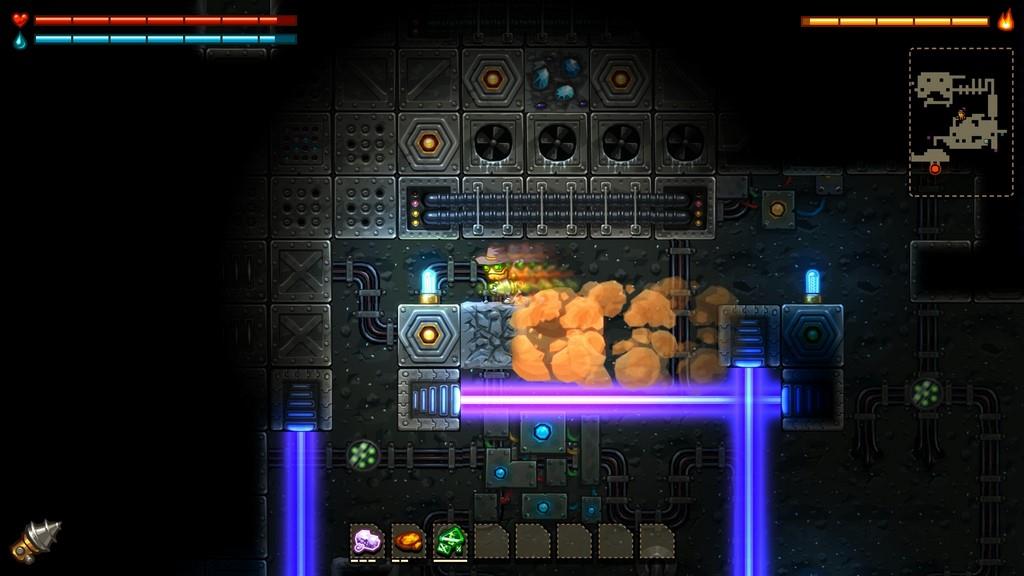 By far, the most interesting thing about SteamWorld Dig is the way you create your own platforms and pathways. It inverts the y-axis of a typical platformer by making you go down instead of up. Gravity remains un-inverted, though, and because of this it's entirely possible to trap yourself and have to self-destruct and restart from the surface. You can only mine blocks in the four cardinal directions, as well, so you can't dig your way back up if you find yourself stuck. All of this leads to what is essentially a game where you create your own puzzles, and it's fascinating from start to finish. Each step you make must be calculated, and you must think of both how you'll get down and how you'll get up. Enemies, falling boulders, explosive barrels and acid pools add into this equation to make each step incredibly important, or you'll find yourself trapped with no way out. Thankfully, it's possible to recover your dropped loot, so you don't need to be so careful that the game is too stressful or too slow. It's just enough that you're thinking the whole way, and never on autopilot. This, combined with the constant power-ups, makes SteamWorld Dig have momentum throughout your entire journey.

As good as it is, I do have a few problems with SteamWorld, though admittedly most of them are pretty minor. I think it doesn't quite have the replayability factor it was going for. It's a rather short game, likely clocking in between 4-6 hours for most people, and the map is randomly generated with each new game. I think it may be a little too long for multiple playthroughs, though. It ends right when you are starting to feel at the peak of your power, and then it's straight back to square one with your new game, which undercuts the feeling of progression I have been talking about. The enemies are also annoying on occasion. They work well when they encourage you to think of creative ways to avoid them, but when you're forced to fight them, they just get in the way of the real fun of the game, and towards the end are extremely dangerous and rampant, meaning you need to fight them more often. Again, none of these problems are all that severe, and certainly shouldn't dissuade you from playing the game.

SteamWorld Dig takes the age old formula of platforming and puts a fantastic spin on it, and the result is a unique experience that makes you use your noggin as much as any pickaxe or drill. It's simple enough to jump into immediately, but complex enough to never let you stop thinking. There's momentum all the way to the end, and I'm willing to bet that many people that play SteamWorld will play through the whole game in one sitting. Even though that momentum falters a bit upon new games, the drive of discovery in the randomly generated mine is enough to get you ready for round two, and many subsequent rounds after that.

A great twist on a genre almost as old as gaming itself, SteamWorld Dig gives platforming an injection of life and spirit that stands out from the crowd in this age of blockbuster gaming. It's worth playing for many reasons, but the fresh way it handles platforming is reason enough itself.