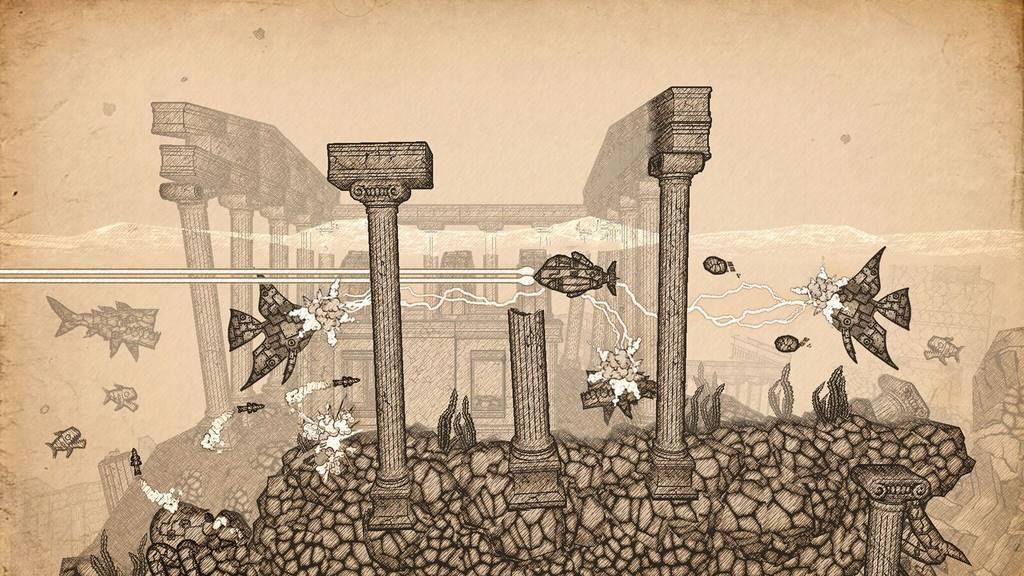 It’s remarkable how much indie support the Nintendo Switch is getting. Puzzlers and party games like Death Squared and Lovers in a Dangerous Spacetime have taken to Switch’s “multiplayer anywhere” couch co-op like a fish to water. You don’t realize how habit-forming Stardew Valley is until you can take it anywhere. Some indie darlings like Axiom Verge are even getting special edition physical releases on Switch. Of course all of these games have been previously released, usually on Steam, but the Switch’s portability adds a new incentive to try these games again, or for the first time. So it’s a welcome surprise that Pixel Perfex’s Earth Atlantis is making its debut on Switch; while the game is set for release on mobile, PS4, Xbox One and PC and it first showed up on Steam Greenlight, as far as I am aware Switch is the first platform where you can play it.

Earth Atlantis is a plucky little indie game that fits quite well into the Switch library. The plot is straightforward: after an ecological disaster, the Earth’s surface is 96% covered in water, and deadly machines have evolved to take on the forms of marine life. You play as a submarine captain who hunts down and dispatches the most dangerous of these aquatic robots. On the surface the game looks quite artful; the visual design resembles an 18th-centurly explorer’s notebook, or an antique topographical map. Backdrops, items and enemies are all polygonal but rendered in a sketchy, stippled filter against a yellowed, age-stained background layer. It’s certainly striking and unique; you begin the game floating in front of a submerged Statue of Liberty.

Once you get past the creative aesthetic, you will find a very workmanlike indie game that is a fusion of a couple genres. Part Metroidvania, part bullet hell shooter, part boss rush, Earth Atlantis has you exploring an underwater labyrinth of caverns, tunnels and sunken metropolitan ruins. Along the way you must collect powerups to level your weapons. You do this by blasting away at minor enemies, which will randomly drop floating “P” bubbles. At the outset you have a measly pea-shooter, but after a healthy number of upgrades you’ll be able to fire five shots forward and four shots aft simultaneously. You can also obtain special weapons, including a dumbfire torpedo, smart missiles, and a homing electric charge. These weapons can be swapped out by collecting different powerups, to encourage experimentation. 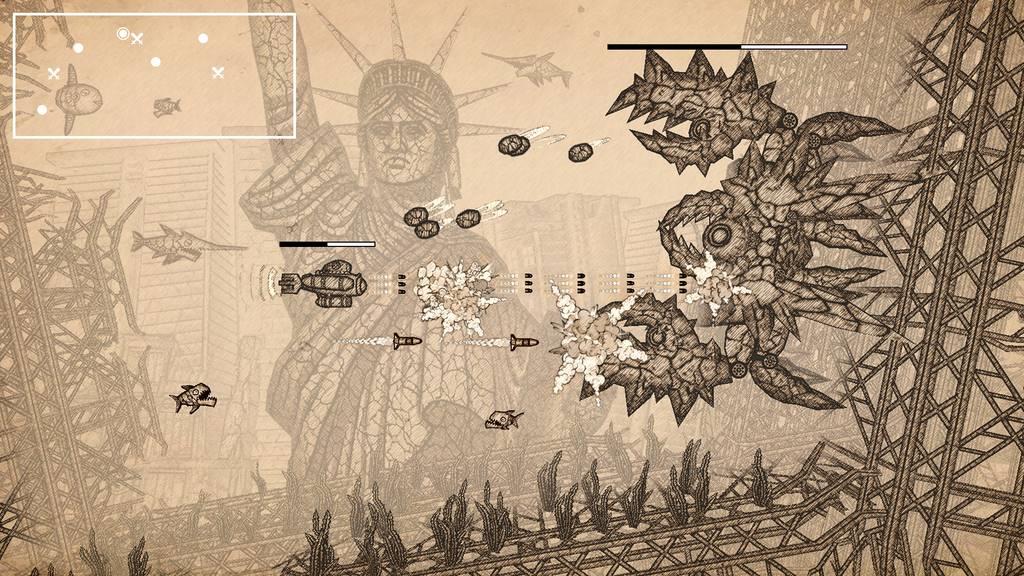 Earth Atlantis lulls you into a false sense of security until you run up against your first boss. Even if you get surrounded by a dozen small enemies, you can typically wipe them out without much trouble and recoup whatever minor health you lost. Once you encounter a boss, however, the difficulty ramps up considerably. Bosses are utter bullet sponges that dish out waves of homing attacks, area-of-effect weapons and for good measure they’ll occasionally ram you, which is an insta-kill. It would be pretty silly for me to complain that a shoot-em-up is hard, but this difficulty spike comes out of nowhere. It’s also annoying that dying resets your ship to zero; you keep your exploration progress but your sub is back to that measly pea-shooter, meaning you have to grind through a lot of minor enemies to get back to fighting shape. It would be nice if there was a lives system implemented, so that you could keep your powerups if you were skilled enough to avoid dying too many times.

Killing bosses causes previously blocked off areas of the map to crumble, allowing further exploration. Earth Atlantis isn’t a level-based scrolling shooter, but one big map that opens up the more you explore and defeat bosses, which is a nice variation on a genre that is typically pretty linear. The issue is that once you’ve seen the first couple hours, the rest of the game has relatively few surprises for you. This doesn’t make Earth Atlantis a bad game, just a comparably shallow one. In many ways it reminds me of an old Game Boy title, something more geared toward short, pick-up-and-play sessions, and that’s perfectly fine. Earth Atlantis feels more at home as a portable game, and serves as a nice distraction. 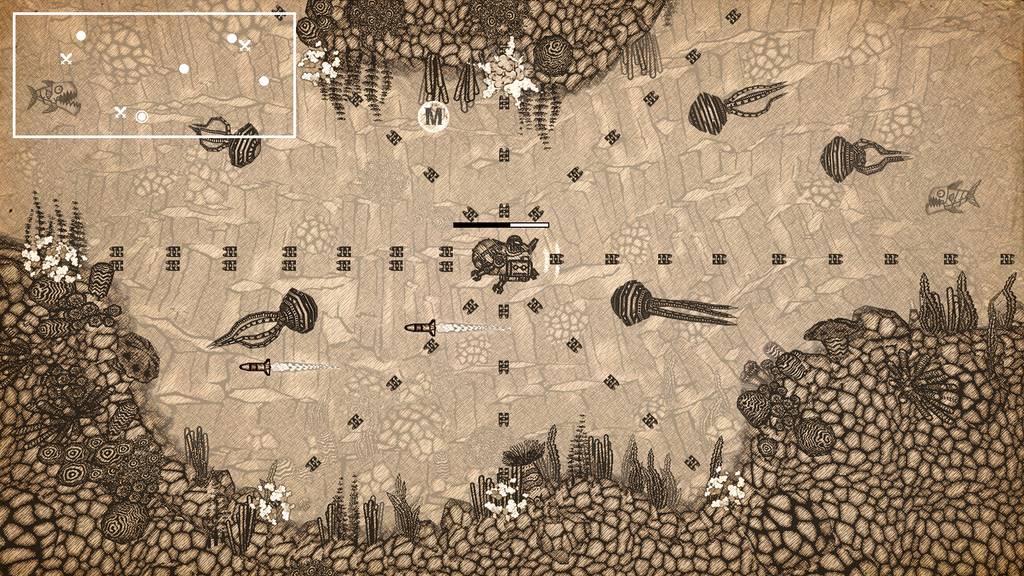 The main novelty of this game is far and away its art style. Screenshots don’t do it justice; it looks like an antique sketchbook in motion and it’s a good example of the Switch’s already strong library of esoteric indie titles. If you boot Earth Atlantis up after a few rounds of Mario Kart or Pokken Tournament it’s sure to grab your friends’ attention. There really isn’t anything that looks quite like it on the market right now, and while I hate to say that the art style is Earth Atlantis’s main selling point, it’s just the truth.

Despite that, Earth Atlantis is a very serviceable, surprisingly challenging exploration shooter. It’s no Cuphead, but it is eye-catching and a solid little indie game at a good price. If you want something that plays familiarly and looks unique, Earth Atlantis is a worthy addition to your Switch library.

Earth Atlantis mixes exploration and scrolling shooter elements to create a challenging, if occasionally frustrating experience. The map-inspired visuals are the most unique and eye-catching aspect of this game, but under the hood it’s a good distraction that works best in portable mode when you have some time to kill.