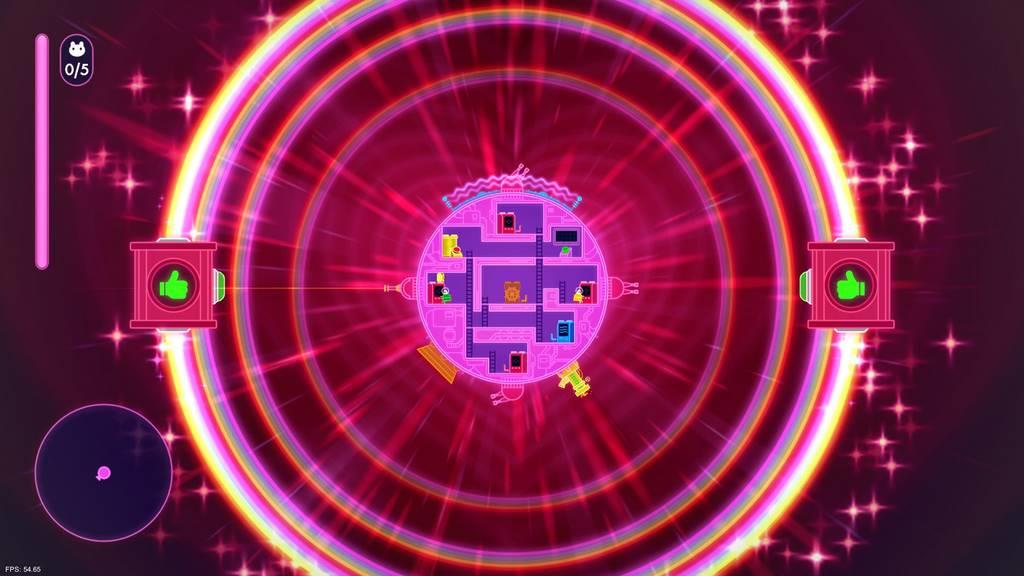 Written by Sean Colleli on 11/1/2017 for SWI
More On: Lovers in a Dangerous Spacetime

What happens when you combine equal parts arcade shooter and puzzle game, then season with a sprinkle of time management sim? You get the appropriately eclectic Lovers in a Dangerous Spacetime. Developed by Canadian indie studio Asteroid Base, the game has been making waves since it arrived on Steam nearly two years ago. It’s an odd mishmash of genres to be sure, but overwhelmingly positive user reviews don’t lie, and the game even showed up on the PS4 last year. Now that it’s arrived on Switch, is it worth becoming a lover once more, or for the first time for that matter?

The premise is suitably absurd; Love with a capital L is the most powerful unifying force in the universe, and scientists have harnessed it with a giant heart-shaped machine called the Ardor Reactor. But an ethereal influence of discord called Anti-Love has begun leaking through the fabric of space, and it damages the Ardor Reactor, turning it into a literal broken heart. It’s up to the League Of Very Empathetic Rescue Spacenauts, the LOVERS, to harness the power of an experimental spaceship and rescue the cosmic citizens who have been captured by Anti-Love.

I won’t speculate on the exotic substances Asteroid Base were using when they came up with this premise—it’s decidedly, ahem, 60s in look and feel—but I commend them for sticking with the theme. The loading icon is a little circle of flashing hearts, for Pete’s sake. When you dig into the gameplay however, you find a remarkably solid fusion of gameplay styles that makes for a fantastic party game. Your prototype love ship (why does it feel dirty to type that?) is a giant pink circle that contains several control rooms, interconnected by hallways and ladders. Each room has a console that controls a different function of the ship. You have four laser turrets that cover each quadrant of the ship, a rotatable deflector shield, an engine pod that can change orientation, and a super powerful gun called the Yamato cannon, which spams a huge attack but has a long cooldown. 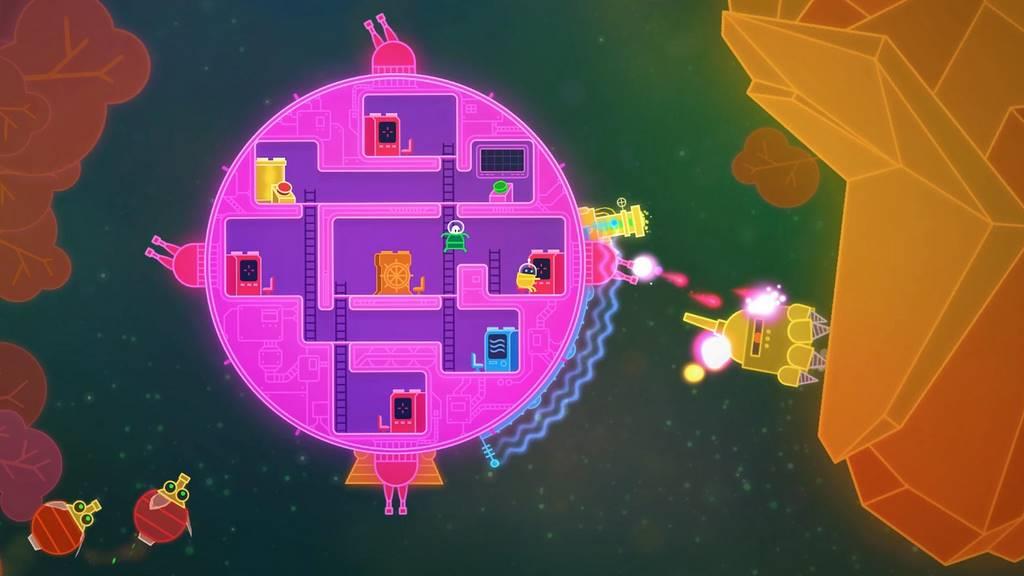 You and up to three other players control tiny LOVERS astronauts who can run back and forth between the various rooms and consoles of the love ship. Your mission is to pilot your ship through Anti-love infested areas, blasting away at enemies and rescuing kidnapped space bunny citizens to unlock the path to the next level. Because each ship function can only be controlled by one person at a time, it takes a considerable amount of coordination and teamwork to fly your ship, protect it from damage and fend of enemies. The base gameplay is very reminiscent of classic arcade shooters, but navigating the levels feels like a maze or puzzle game and the task coordination is very reminiscent of a time management sim like Diner Dash. It’s not just about having good reflexes; if you can’t work in a group, give/follow orders or know your job, then your love ship will be in chaos in short order.

That said, when four people are cooking away—focusing turrets, shielding vulnerable areas from attack, maneuvering the ship perfectly and letting off that Yamato cannon at just the right moment—the feeling is hard to put into words. It reminds me of a great Rock Band session from back in the day, when everybody hit their groove and just had a fantastic time. Lovers is great played in co-op with a friend or significant other, but to get the full effect you really should round up a couple of friends for four-player action. It’s strange, but a lot of already great indie multiplayer titles feel like they were tailor-made for Switch. Like Death Squared, Lovers is a perfect fit for Switch’s couch co-op-ready setup. You get a synergy sitting in your living room with three friends that just isn’t possible playing over the internet on Steam. 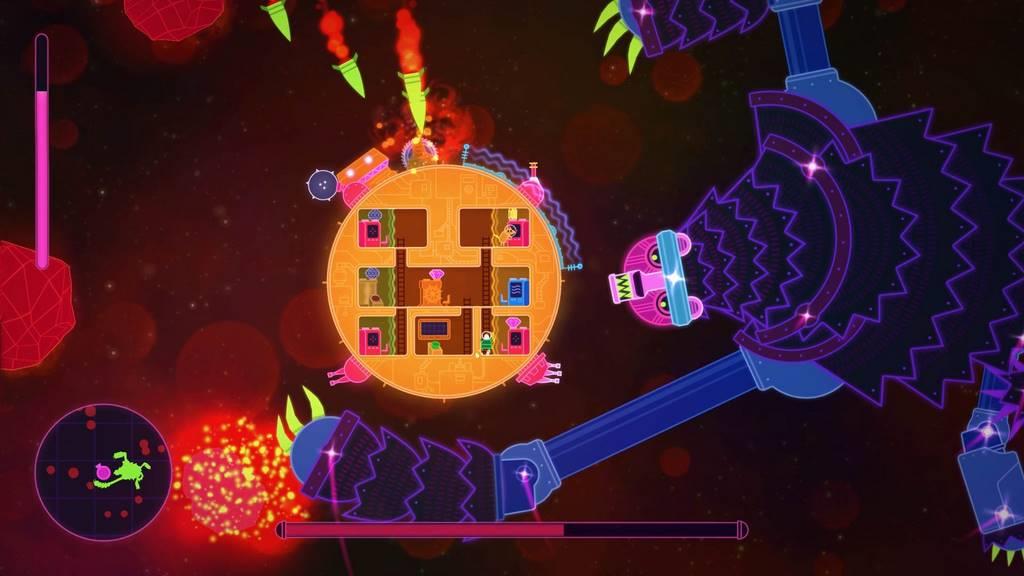 That said, Lovers is also a surprisingly fun time played solo. In single player mode your tiny astronaut is paired up with an AI-controlled pet, who can be directed to any control console on the ship by holding down the X button and selecting the desired room. I was worried that the AI couldn’t handle the coordination needed for precise ship management, but I must say my plucky adorable space pooch did a bang-up job. I would go so far as to say playing through once in single player is a worthwhile time all by itself.

When the hectic action slows down and you don’t have to rush to save your ship from impending disaster, you’ll notice that Lovers is beautiful in a trippy sort of way. True to its genre influences, Lovers looks a lot like the old vector graphic arcade hits of the 80s like Tempest, Battlezone and that old Star Wars X Wing shooter. Pac-Man Championship Edition is a good reference point, but Lovers is just a little bit less abstract; the environments are bathed in pulses of neon, acid-drenched beating hearts, rumbling stars and bubbles, lots and lots of bubbles. Again, I won’t try to guess at what Asteroid Base’s graphic designer was on when making this game, but I can say it would be fun to play and look at after a few beers.

This game is also a steal at $15 on the eShop. If you need to round out your party game list, or if you just want something a little less competitive to salve egos between tense Mario Kart matches, Lovers in a Dangerous Spacetime is your game.

Another great indie title makes its way to Switch where it’s a perfect fit. Lovers in a Dangerous Spacetime is wonderful in both multiplayer and played solo. It might take some time to get your friends acclimated to its synergistic brand of gameplay, but the sense of teamwork you get from a few well-played levels just can’t be found anywhere else.